America - it's a funny old place

Especially in Puerto Rico. A place where in the space of an hour I've seen people driving go-carts along the main road (while being followed very slowly by a police car), a man galloping down the highway on a horse, and even a person stopping and turning around on the motorway. Not to mention a horse being driven at high speed on the back of a truck - it looked a lot like this : 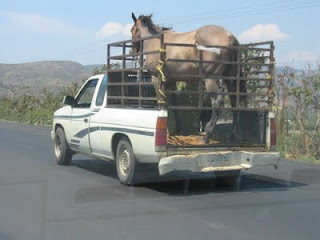 Such weirdness is but one facet of the underlying oddness of America, a place where even the relatively sane believe that owning a gun is a right. Though in contrast to everywhere else in America, it's much easier to get a permit for a concealed firearm here than an unconcealed one. The rest of America apparently thinks that it's safer for everyone else if they know you have a gun; Puerto Ricans feel that if you're life is in danger it's safer for you to conceal the weapon about your person. Like most firearm regulations, the logic behind this one eludes me. Perhaps they're hoping that in the event of an assault, you can surprise your assailant by suddenly brandishing a gun, probably while saying something dramatic.

By some strange quirk - I can't for the life of me think why - the number of murders here per year is the same as the U.K. No, not per capita. Total numbers are the same - despite the massive population difference. It may be true that if you outlaw guns then only the outlaws have guns. It's also true that if less people have guns then less people get shot. That's called counting. But I digress.

Not that I'm sure what it is that Puerto Ricans have to get so very  angry about. After all, you can buy root beer at 89c for 2 litres. That works out to the equivalent of.... drumroll please... 9p per can. That's insane. Not only is it cheaper than milk, it's cheaper than water. But perhaps that's why they're so angry - if you're one of the 50% of the population who cannot abide this sweet, sweet nectar, you're probably quite ticked off about that. Whole wars were fought over opium, so root beer murders seem quite a plausible explanation to me.

There are other food-related oddities. I may have already mentioned the lack of multipack crisps, but I'm going to mention it again because the lack of crisps is beginning to bite. Listen, you bloody colonists*, crisps are supposed to come in small, snack-sized packages, d'ya hear ? Not great bags by the kilo. If I wanted to gorge myself to death on fatty potato I'd be in McDonalds with the rest of you fatsos**. And another thing, they're called crisps, not chips. Get it right.

* Umm, I suppose this doesn't really work for Puerto Rico, which was a Spanish posession, never British. But my comment most certainly holds for the States as well.
** Disclaimer - in fact, I can't in all honesty say I've seen much sign of the infamous American obesity problem over here. However, were I to encounter a McDonalds - which I have not - I'd no doubt find it full of blubbery customers engrossed in being sterotypical.

They also don't have banana-flavour Nesquick - only strawberry and chocolate. I've been addicted to this stuff since I was ten. Giving it up is much worse than relinquishing alcohol (which I'm none too happy about either, but never mind) -  it's more like being forced to give up tea, which is unthinkable. Seriously, I'm going to have to buy some online pretty soon.

Pricing of things is also weird, and probably deserves an entire post at some point. For now, with the exception of soft drinks, food is about the same as in the U.K. Amazon's online prices seem to be very nearly the same, allowing for their frequent massive discounts that appear not to apply to all places at the same time. However, the shipping prices have got me bewildered.

For instance, in order to buy True Blood from the U.S.A. it would have cost me about $40 total, or about £25. Thanks to a heavy U.K. discount, I was buy it from Britain for a grand total of £10. So apparently, it's cheaper to produce a show in the States, export it to the U.K., and then ship it back again.

Nor is this an isolated example owing to a freak discount. I bought the expansion to Oblivion from the U.K., simply because I objected on principle to having to pay more to get it shipped from the U.S. The total saving came to about 50%. Okay, since this is dirt cheap anyway this only means I save £5 and it will probably take longer to get here. But that's not the point ! The point is that it can't possibly cost less to ship something from Britain, which is 4,000 miles away, than from the continental U.S., which is only 900 miles away.

Hellooooo ? America...? Remember that counting thing we talked about ?

﻿Lucky for me though, because I discovered  (thanks to an Apollo 13 DVD that was lying around the place) that region 1 DVDs won't play on my Sony laptop, who have with skilfull cunning prevented any workarounds like AnyDVD or Remote Selector from having any effect whatsoever, nor are there any firmware updates available for my drive. Now I don't intend to spend $100 on a second blu-ray player because that would vindicate the evil fat-cat corporate overlords who decided that discs should have regions in the first place. Good grief, this is the 21st century. The idea that what you can watch should in any way depend upon where you are is frankly offensive.

Therefore out of sheer spite I shall continue investing my American dollars straight into the British economy. Except I won't, because I still don't have an American bank account, so I have to spend my existing British money to watch British DVDs of American shows on my British DVD player. Hmm.
Posted by Rhysy at Monday, April 18, 2011