This weekend saw a trip to the remote island of Culebra, for no particular reason. Arriving on a Saturday evening, we proceeded to while away a few hours in some small random bar. Nothing happened. However, things became immediately interesting the following morning, with the villa manager telling us of the approach of Tropical Storm Irene.

The two options she presented were to either (1) leave on the midday ferry, essentially negating the entire trip, or (2) stay somewhere else. Option (1) did not seem much fun at all. Option (2) seemed pointless. So we opted for (3) - stay put. After all, we had a well-equipped villa with air conditioning. 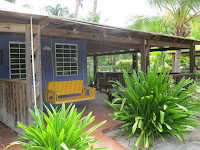 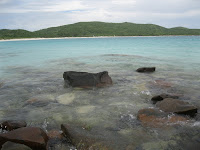 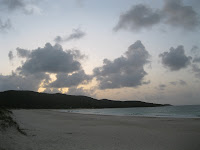 The day proceeded rather well. It consisted mainly of swimming in the sea and getting hit by waves, which in the Caribbean is like getting hit by a wall of semi-molten marshmallow while inside a washing machine. Pretty soon we'd adopted two bona fide lolcats. First and foremost was a large ginger and white cat missing half an ear and having only one eye. This clearly marked him out as a pirate, and so he was quickly named "Miarrr !". 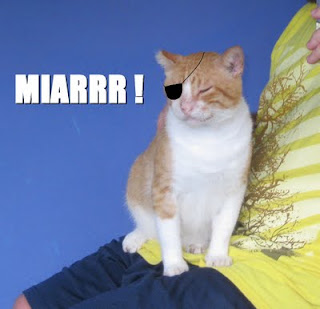 Miarrr proved a faithful furry feline, ever watchful of our little cabin. Possibly this was because almost everyone else had left and we were the only source of food. Soon we met Miarrr's friend and rival, a smaller, dark grey cat whose colour could only mean she was a ninja. Logically, therefore, we named her Mr Miaowgi. 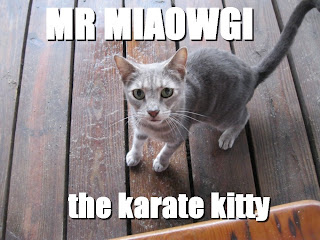 To combat the effects of the tropical storm - by now forecast to reach hurricane strength - we wisely decided to drink ourselves into stupefaction. This proved a wonderful decision. After a bar and a restaurant, we moved on to our own supply back at the villa. Several bottles later, the power went out. Having no provisions for this of any kind, we resorted to the little screens on my camera and mp3 player for light, soon draining the batteries of both of them.

Then, somehow, we managed to start a fire in a small metal bowl. I wish very much I knew what was being burned, but half a bottle of Disaronno (amongst other things) has somewhat weakened my memory. All I remember is discovering that insect repellent is flammable. Anyway, we continued in this fashion to mock Irene throughout the night. Which was not difficult, because frankly the most it did was blow down a single tree. Miarrr treated the entire escapade with characteristic stoic disdain. 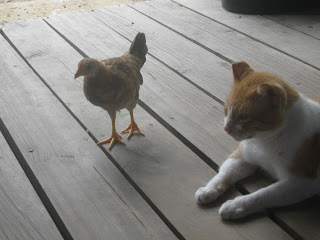 In the morning I instantly remembered that my Kindle cover has a very bright light that lasts for many hours. There was absolutely no need to burn anything at all. Whoops.

We soon discovered that leaving the island was now impossible, because all flights and ferries were cancelled. We still had no power, so the manager asked us in a very loud voice how many bags of ice we needed. No-one could think of anything we could use the ice for, except possibly to make sure our drinks were nicely chilled, which isn't a priority at 9am when you've stopped drinking at 3 that same morning.

Thus the day was largely spent faffing about, though we eventually opted for 1 bag of ice to keep food cold and procured some clean towels, though these were of limited use with no hot water. On the plus side, it gave extra time to explore the beach and discover the abandoned tanks. 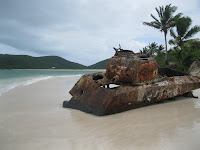 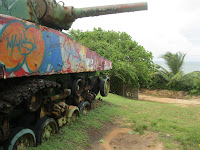 Since we'd already done the getting wasted routine, and still being without power, there was nothing for it but to search for somewhere that did have power and hope there was something on TV. We managed this, finding that one of the empty cabins somehow had power and TV. Thus, before proceeding on to burn things for the sake of it, we watched Predators and ate nachos. Miarrr tagged along, either out of a sense of loyalty or possibly just because he had nothing better to do. In short this hurricane was not quite the life-threatening utter terror that Discovery Channel documentaries have led me to expect. 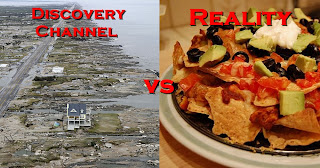 The following morning flights were still cancelled - although why is a mystery since the wind had largely died - but a ferry service was operating. Having been stuck on a remote tropical island without power or any clean clothes, this prevented a second natural disaster from striking the Caribbean - namely, smelly astronomers. At 10am we boarded a cargo ferry back to the big island, and it left instantly despite it being a full 30 minutes before the scheduled time. 2 hours later we were back in Puerto Rico proper. 4 hours after than - more than double the usual time, owing to inexplicable traffic jams - we were back in Arecibo.

So, the worst this hurricane did - as far as I can tell - was to knock over some trees, cause a bit of flooding, and generally irritate everyone. Hurricanes, it seems to be, are no problem if your buildings are all little concrete bunkers (you listening to this, Florida ? Stop with the wooden huts already !), you have a healthy supply of booze, flammable materials and lolcats.
Posted by Rhysy at Wednesday, August 24, 2011