The Curse of Christmas

About half of all missions launched to the planet Mars have failed. The most recent is the tragic, much-delayed Phobos Grunt, which crashed... on Earth. Currently the only plausible explanation is the Great Galactic Ghoul, a great big space monster which eats approaching Mars probes. 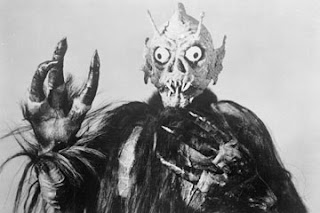 A similar fate has befallen my Christmas's of late. Two years ago my nephew was born on Christmas Eve. Hurrah ! if you love nephews, that is. I've already articulated my thoughts on the superabundance of Peppa Pig, though this ghastly creature is but a trival distraction compared to the sheer Kubrick-esque mentality that is Baby TV. This is to say nothing of the horrors of changing a nappy or, worst of all, the total inability to check my emails for A WHOLE HOUR AT A TIME !!!

But I digress. Last year, my mum decided it would be jolly good fun to trip in the snow and break her ankle. Oh, joy. That was about a week after my dad got out of hospital having had a very sudden onset of septicaemia, just to make things that bit more fun.

This year we dodged a hospital visit at Christmas but instead got to enjoy New Years in the delightful surroundings of the cardiac ward, with my dad having exhausted the possibilities of septicaemia (having had a second bout earlier in the year) and instead gone in for nothing less than a quadruple heart bypass. Well, may as well take things to the extreme, I suppose. On the plus side, I got to enjoy this temperate island paradise a while longer, because going to the Austin for the AAS and giving a talk while that was happening was just not going to happen.

Oh well. Perhaps next year we'll get to stay home. You never know. Or, as has been suggested, we could hold a surprise Christmas in, say, June, just to catch the Carnivorous Christmas Cactus - for that is the most logical explanation for all the Christmas disasters - off-guard.
Posted by Rhysy at Saturday, February 04, 2012