How I Became Louis Theroux and Wished I Hadn't (Part I)

I've just returned from a trip positively bursting with superlatives. I'd travelled to places hotter, drier, colder, higher and further than I've ever been before. The round trip was about 10,000 miles, involved 9 flights (arguably more), a lot of science and an awful lot more drinking.

We begin with a jaunt to NRAO's 13th Synthesis Imaging Summer School. This is a 9-day workshop in Socorro, New Mexico where they teach everyone how to do radio interferometry - basically, how to use multiple telescopes to give the resolution of a freakin' massive one. Even though the maths involved is remarkably ugly, it wasn't as bad as getting to Socorro in the first place.

The journey was ever destined to be a very unpleasant affair, involving 3 flights with a 4-hour layover in Miami. That would have been fine, except that just as the plane was about to leave an oil leak from the engine was discovered. So everyone was loaded onto a shiny new and presumably more well-sealed plane, which took off about 2 hours after the original scheduled time. Then, after about 3 hours of flying, it was diverted from Dallas to Austin just as it was about to begin its descent.

The plane then sat there on the tarmac being refuelled until the storm over Dallas cleared and we went back. By which time there were no more flights going to Albuquerque, so I got put in a hotel for the night without any luggage. I arrived in Socorro the next morning several hours late, having missed the opening lectures. My luggage turned up though, which was nice. 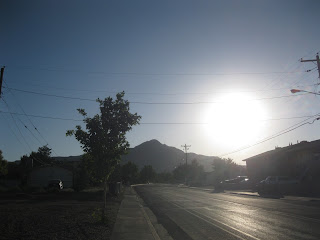 I found Socorro to be a wonderful, glorious travel-shock after Puerto Rico. Whereas Arecibo typically experiences 90% humidity, in Socorro it's more like 5%. Unlike Arizona, it has a lot more interesting plants than Arizona's ubiquitous and surprisingly boring Saguaro cactus. Although it's vastly smaller than Arecibo (population 8,000 in Socorro, 100,000 (supposedly) in Arecibo), about half of those are students. Even better, those are largely split between geology and astronomy, which as everyone knows are the subjects all the really cool people take. Plus, you can walk across the whole town in about 30 minutes.

Socorro is slightly hotter than Puerto Rico, but the almost complete lack of humidity makes it precisely 516 times more bearable. That means that a 7-mile hike up a mountain doesn't feel like a death march to a gulag. Not until you gain a few thousand feet in elevation, anyway. The summit of this particular mountain is at 3,287m, way higher than anywhere in Britain. By the end, going upwards more than a few steps is like Frodo's final ascent up Mt Doom. Fortunately, when perseverance, determination and physical fitness have long since given up in disgust, sheer bloody-mindedness keeps going. 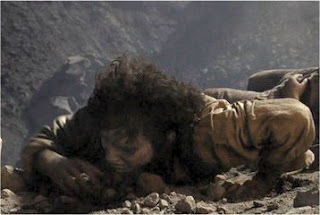 On the summit of this mountain is an optical observatory which has a parking space for the disabled (a wonderful example of the long arm of bureaucracy given that it's about 50 miles from anywhere at all and there's not exactly a shortage of space), and what is surely the world's most scenic fire hydrant. 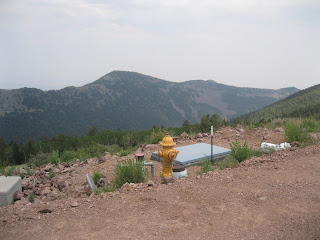 The fire hydrant is not as ludicrous as it may appear. The haze in the photographs is due to an area the size of Chicago being on fire about a hundred miles way. So, if it helps prevents mountains from burning down, I'm all in favour of scenic fire hydrants.

The next day we were treated to a tour of the adorable little VLA telescopes. Bless 'em, they're only 25m across, the same size as Arecibo's secondary reflector, but they do let you walk around inside them which is pretty cool. 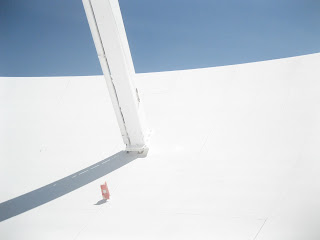 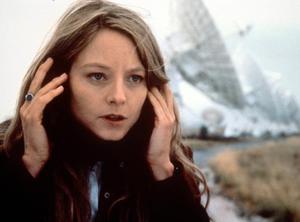 The evenings were spent in BOTH of the town's bars. Yup, it has just the two, but given the town's pretty awesome populace, that's not so bad. There's no air hockey but they do have pool and shuffleboard, which as far as I can tell is the pub equivalent of curling. And it's in the bars, of course, where I seem to have become an unwitting and unwilling junior Louis Theroux, attracting America's hardened crazies to me like - err, well, you'll see.

First, we have the alien conspiracy theorist, convinced that aliens abducted humans from Earth 10 and 20,000 years ago. Also that religion is intolerant and should not be tolerated. Oh yes, and a firm believer in eugenics, on the grounds that some people are clearly just better than others, and quite certain that genetic manipulation in Columbia is already starting to produce a master race. And a thoroughly well-meaning and really nice guy, to boot.

Then a wholly new experience befalls me. A ludicrously overtly gay older man decides I have an adorable accent and spends the next few hours in a really weird attempt to charm me. Apparently, he's posted photos of me on Facebook to try and make his ex jealous. Never before have I been so incredibly glad that I'm not on Facebook. Although I have seen at least one of the pictures, and it's not a pretty sight.

This is turn causes other uncharacteristic behaviour on my part, namely, to as quickly as possible find the nearest attractive girl and talk to her at length about absolutely anything. Which, somehow, proved very simple, and I spent the remainder of the evening learning all about geology (did you know there's a 25-mile wide magma plume underneath Socorro ? See, I was listening !), life, and for some reason cats. Fine by me. And then, possibly because of the sheer surreality of the evening, I simply said, "Well, it was very nice talking to you !" and went back to my hotel. Which is very probably the stupidest thing I've ever done. 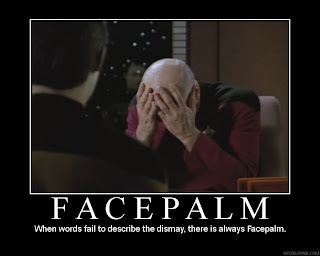 That about sums it up for Socorro. Tune in soon for Part 2, where I describe my surprisingly similar yet remarkably different adventures in Alaska. Actually, the similarities are so uncanny that it's possible I'm stuck in a closed timelike curve and might never escape, but I live in hope.
Posted by Rhysy at Monday, June 18, 2012