Hercules, Probes, a Talking Moose... it's funnier without the commas

Sometimes I don't bother posting anything because I'm lazy. Well, Game of Thrones isn't going to watch itself, is it ? You're goddamn right it isn't. Other times, as lately, I don't post anything because I don't have time to.

First, my parents visited. Hurrah ! I had all of two - count 'em TWO visitors in two years at Arecibo. And that's an average. "An average ?" Yes, an average - one person came specifically to visit me (although that was tacked on to an observing trip somewhere else in America-land), one person I'd never met before but was planning to work on AGES, so doesn't really count, and the other I've only met at conferences, and - surprise surprise - was there mainly for a conference, so also doesn't really count.

The excuses, "it's too far", "I can't drive", "it's too expensive" are all perfectly valid for Puerto Rico, but don't pass muster with Prague. And since another visitor is lined up for the end of the month, my visitor rate in six months has already exceeded that from 2.5 years in the Caribbean.

With my parents, we mostly explored things I've already seen before, so I won't repeat them. Perhaps the highlight was wandering through the Wallenstein Gardens, which I had not done before, and discovering a pure white peacock. It was displaying the moment we entered, but didn't do it again. My mission is now to keep going back there and get a photograph of the peacock in full "look at me I'm a giant Elizabethan ruff" mode. 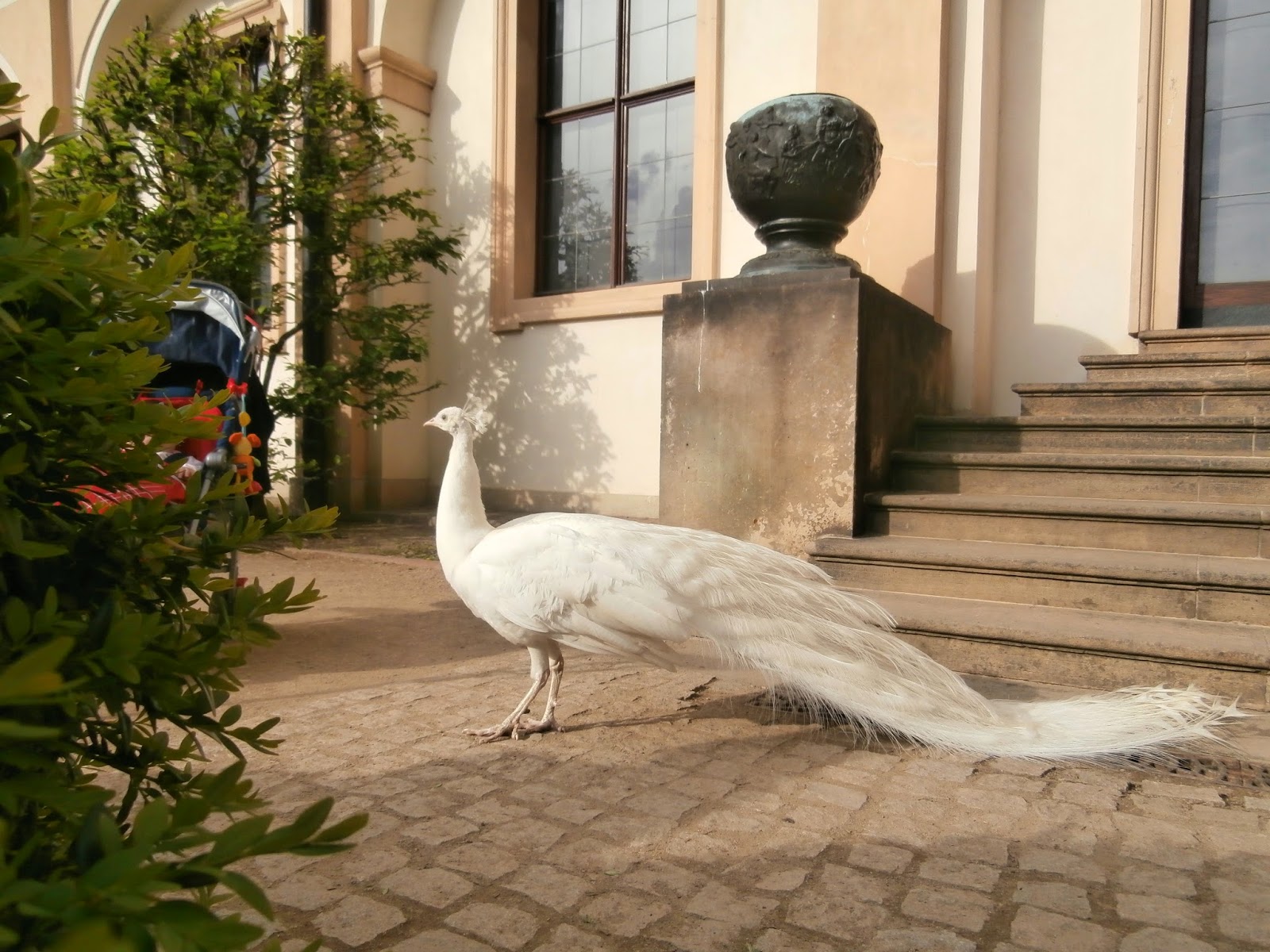 The other noteworthy thing about the gardens is that Prague has again failed at dragons. This time it's a statue of Hercules fighting a small though ferocious-looking dragon. Nothing wrong with that, except that it's abundantly clear that Hercules has really got the upper hand. Specifically, he looks like he's about the knock the poor thing's head off. It doesn't stand a chance. 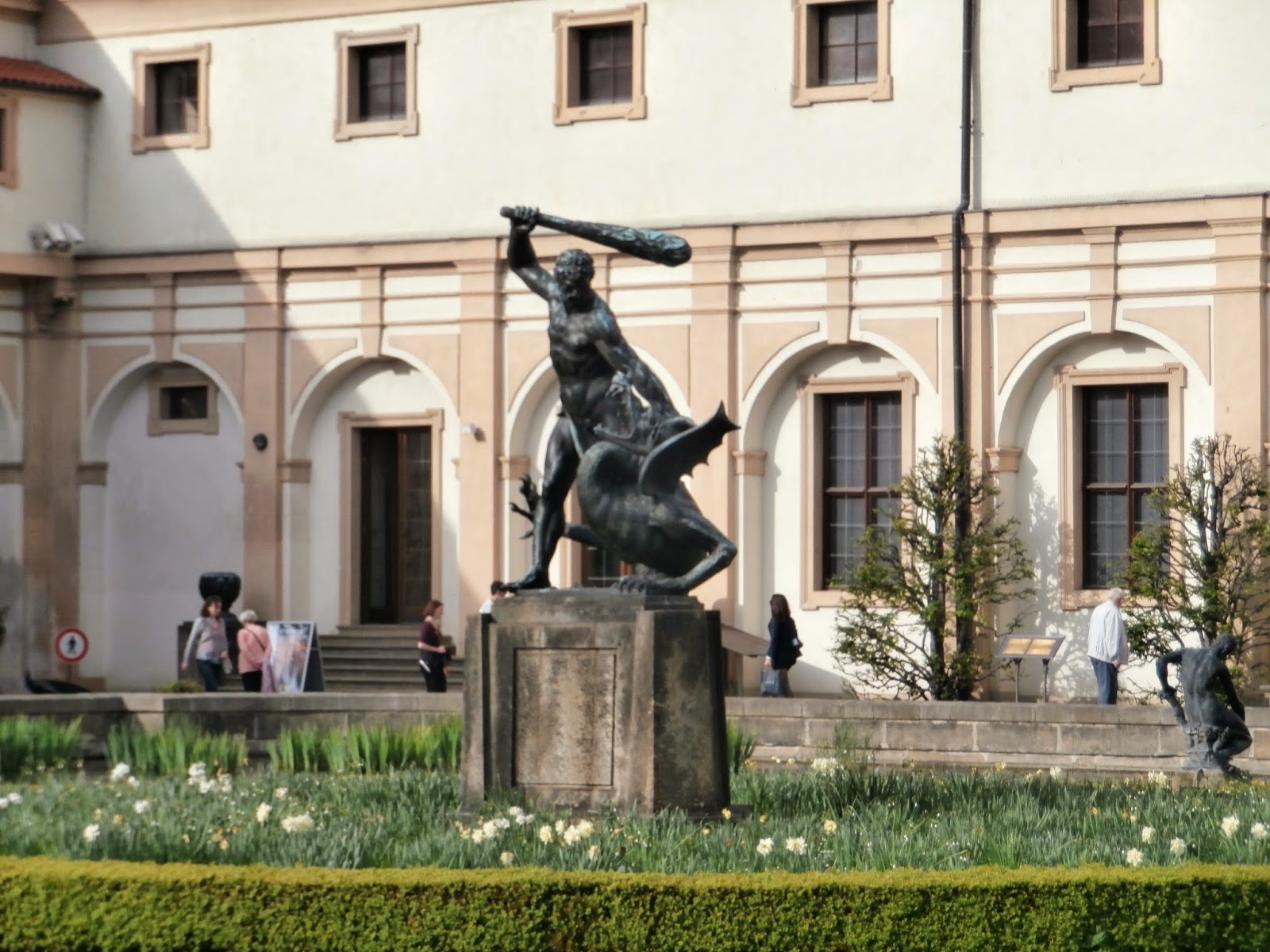 We also visited the senate halls, which are resplendent and made a nice change from all the churches, and Petrin hill, because you can't really go wrong with Petrin hill. This time we went inside Štefánik Observatory, which has quite a nice public exhibition. It even has a little panel about Arecibo, and I learned that "Sondy" means "probes" in Czech. As in "meziplanetarni sondy" - interplanetary probes. Which I think must be very funny if you're a planetary scientist and your name is Sondy. 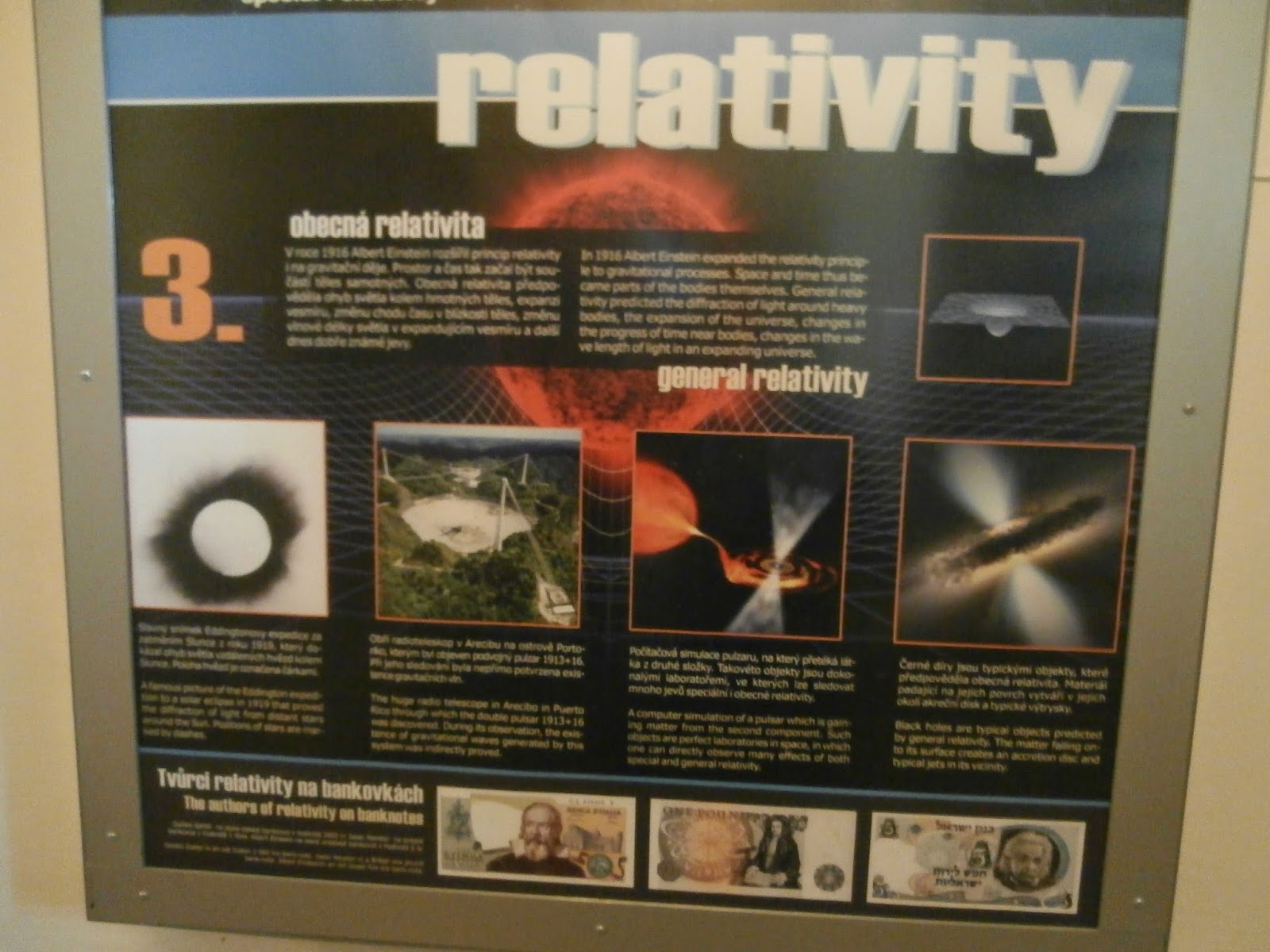 The week after that I was back in Cardiff giving a seminar. For seminars these days I'm trying to up the ante on the theatrics, which means a lot of preparation time - pretty much every spare evening beforehand. The title is, "The Arecibo Galaxy Environment Survey : Science with a Lonely Smurf and a Talking Moose", and it includes a physical data cube and three properly 3D movies. As in the old-school 3D glasses. None of this fancy full-colour nonsense.

Full colour versions can be seen in this video.

There's not a lot else to say about Cardiff other than that May is bluebell season, which doesn't sound so impressive unless you realise that they grow by the million. Add in a large friendly dog and we have ourselves a winner. 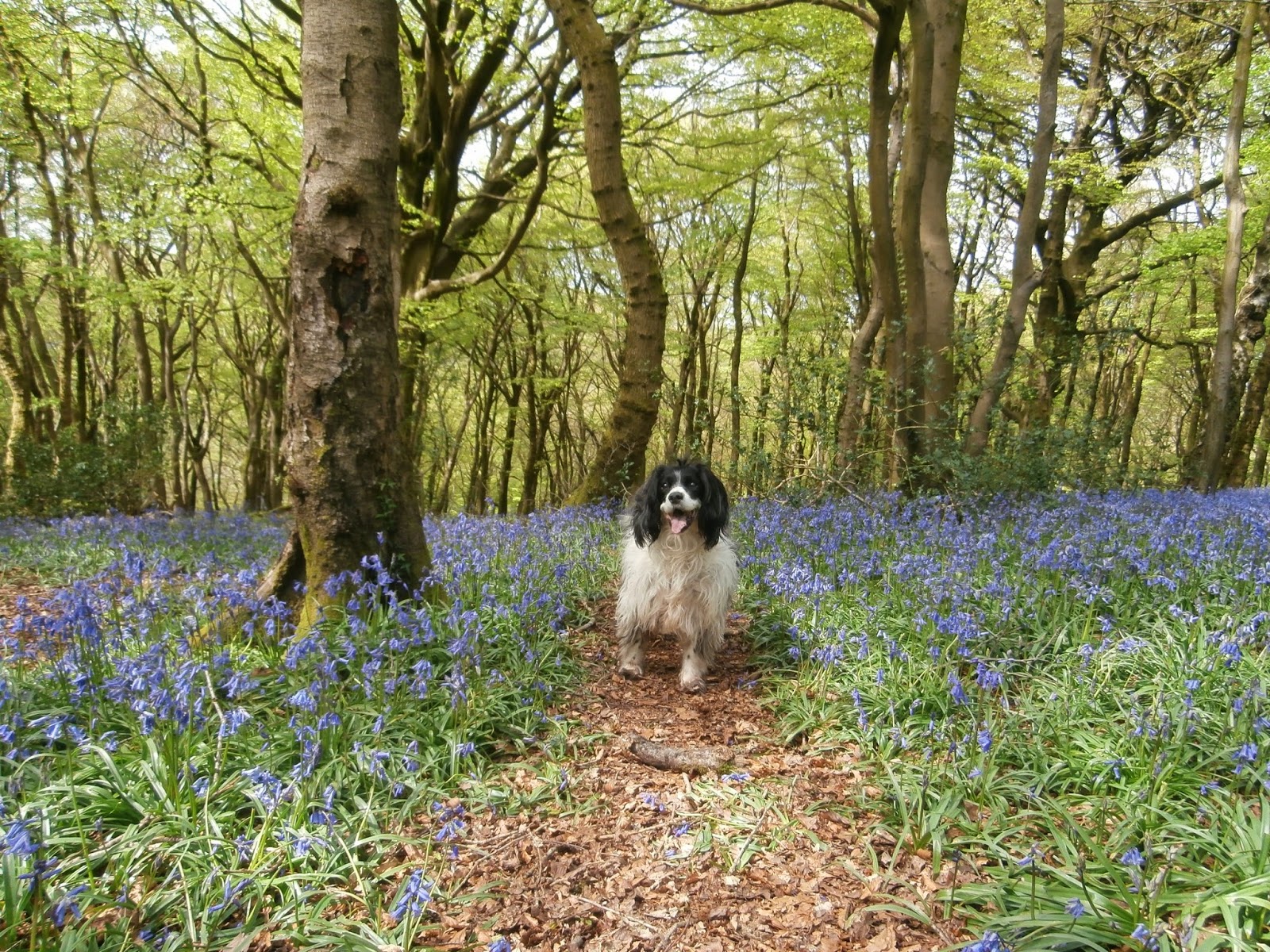 We also went to the sand dunes at Merthyr Mawr - yes, Wales has sand dunes, believe it or not. The Czech Republic does not have any coastline, of course, despite some laudably hair-brained schemes to overcome this particular difficulty. The problem is I've been spoiled by the ridiculous warm waters of the Caribbean, and Merthyr Mawr is more on an estuary than the actual sea. You can see the other side, for heaven's sake. Which left the whole experience somewhat unsatisfying. 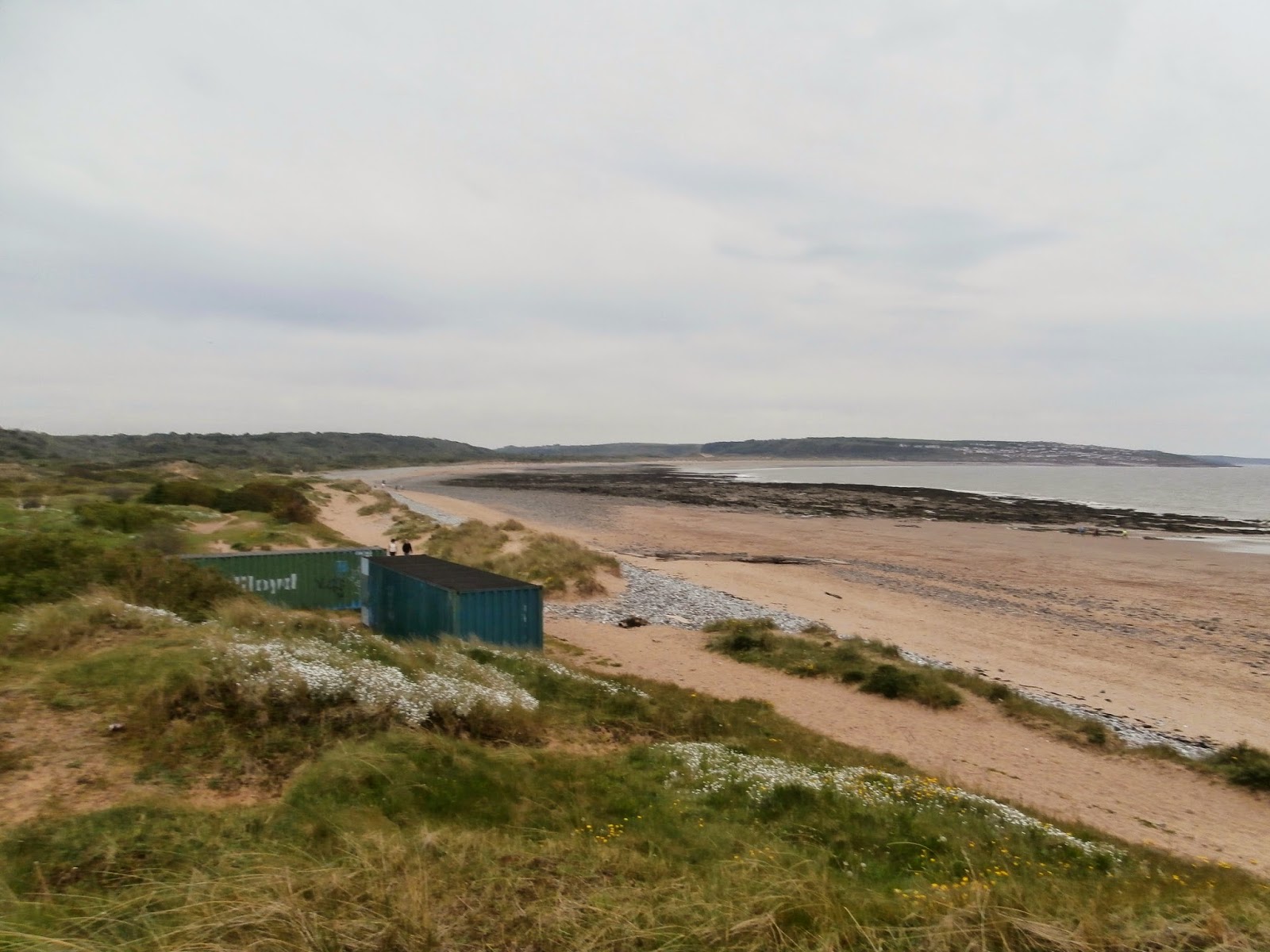 Once back in Prague I gave the same seminar in Ondrejov, where the other half of the institute is located. The 3D movies were just as popular, though overall the reaction was a lot more muted than in Cardiff. Several people fell asleep. Well, I was battling a cold at the time, and it's very difficult to speak with any enthusiasm when you can't actually hear even how loud you're speaking. It probably also doesn't help that the galaxy group is a lot smaller in Prague and there were very few native English speakers in the room. 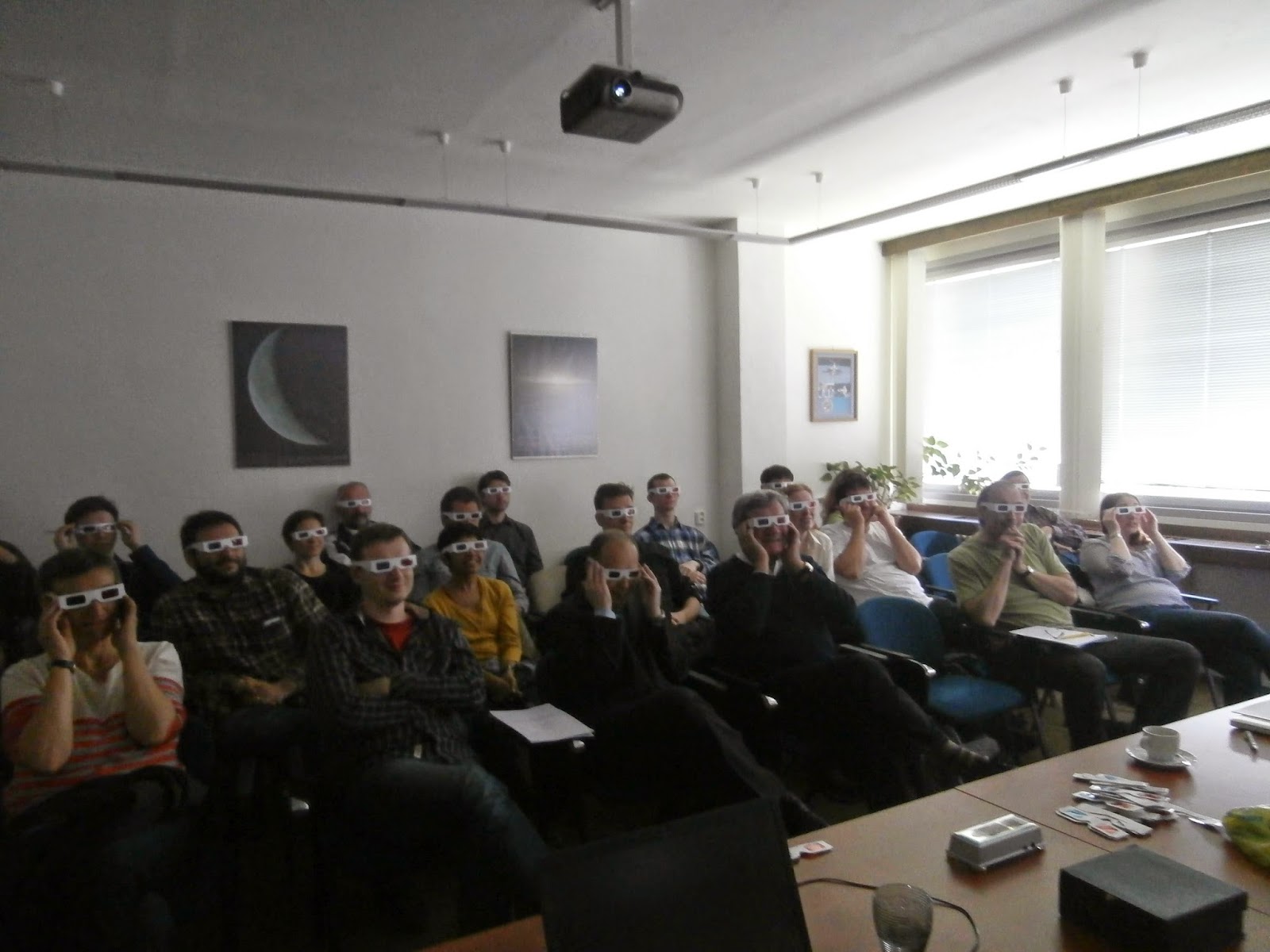 This done, I pointedly spent the rest of the week watching Netflix and DVD box sets, because I'm sick of doing science in the evenings. I don't like ad-libbing in front of large audiences, hence I end up repeating the entire 50-minute talk to an empty room again and again and again.

Anyway, that's how I spent the last two weeks. No more seminars in the foreseeable future - the next conference is in Vienna, but mercifully that's a poster presentation. And a jolly good thing too, because short of buying an Occulus Rift, or baking everyone a cake, I have absolutely no idea how I raise the stakes for the next talk. Fireworks ? Cheerleaders ?* Random pictures of cats ? Further research is required.

* If nothing else, a letter-by-letter chant for "extragalactic neutral atomic hydrogen" would probably obviate the need for an actual talk.
Posted by Rhysy at Sunday, May 18, 2014