That's Not The Way To Do It, You Blithering Idiots

Would you watch an hour-long documentary on YouTube if you could only watch it in 10 second clips and the next one didn't autoplay ? Of course not. But apparently people are fine with reading longish, very serious articles on twitter. Twitter ! In 140 character snippets ! The hell is wrong with you people ??? Have you taken leave of your senses ?!? And then, just to make the stupidity truly unbearable, when someone writes a stream of connected tweets, how do people reshare them ? By collecting them all together to form a single block of readable narrative text ? NO ! They copy and past screenshots !! Aaaaaaarrrgghhh !!! 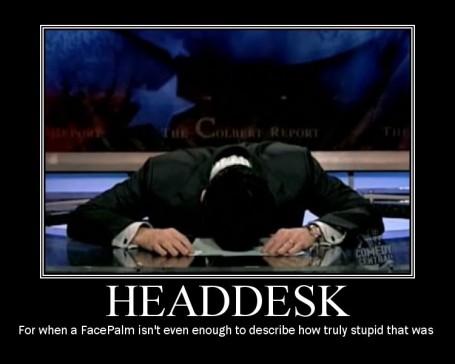 Come on people. Please. For goodness bloody sake. It's not like I'm asking you to, oh, I don't know, re-edit the entire of Beowulf from poetic verse into prose. Just string a bloody sentence together, you twerps. And just because the BBC like writing articles in one-sentence "paragraphs" doesn't bloody mean you have to.

Look, I'll give you an example. Scott Adams, the creator of the genuinely amusing Dilbert webcomic, recently wrote a blog post ostensibly about how to convince climatologists to convince skeptics that global warming is a real, human-caused problem. Actually any genuine good points about how to communicate are lost in the general fuggy tone of "I wish I was a lunatic but I can't quite make it". The thing feels like oh-so-much bullshitting to me, presenting an apparently reasonable goal and then proceeding in a bizarre, overtly hostile fashion.

Yes, I'm aware of the irony of attacking someone for being hostile, so don't bother pointing that out.

Aaaanyway you don't have to take my word for it, and nor should you. I'm forever going on about the need for actual climatologists to engage with people instead of ignorant astronomers like me, and cometh the hour, cometh the climatologist. In this case a guy named Gavin Schmidt, director of NASA's Goddard Institute for Space Studies. Clearly not a dull chap at all, but how did he respond to Adams ? Through a series of tweets. Which were then recollected by some blogger into this unreadable format.

Right. Fine. Let's put this in a readable format then. The text below is entirely by Dr Schmidt, I've simply joined them all together, removed linking ellipses, replaced & with and, 3rd with third and suchlike, invented paragraphs, and generally tidied up. I will keep the title on the original blog. All of my own edits are clearly marked in red. Don't bother debating any of the issues with me, I'm just presenting this as a public service because I wanted it in a readable format.

Here we go then.

Scott Adams says, "You scientists can't make me look beyond tired talking points and clichés !" This is of course true. Sad. But since I'm in the mood for a totally futile exercise, here's why his points are disingenuous at best.

Let's start with models. Remember George Box ? "All models are wrong, but some are useful". It's not just true for climate, but also quantum physics, GR, SM etc. It would be criminally irresponsible for scientists not to explore real world impacts of real structural uncertainty in complex systems. And we know that climate is complex : 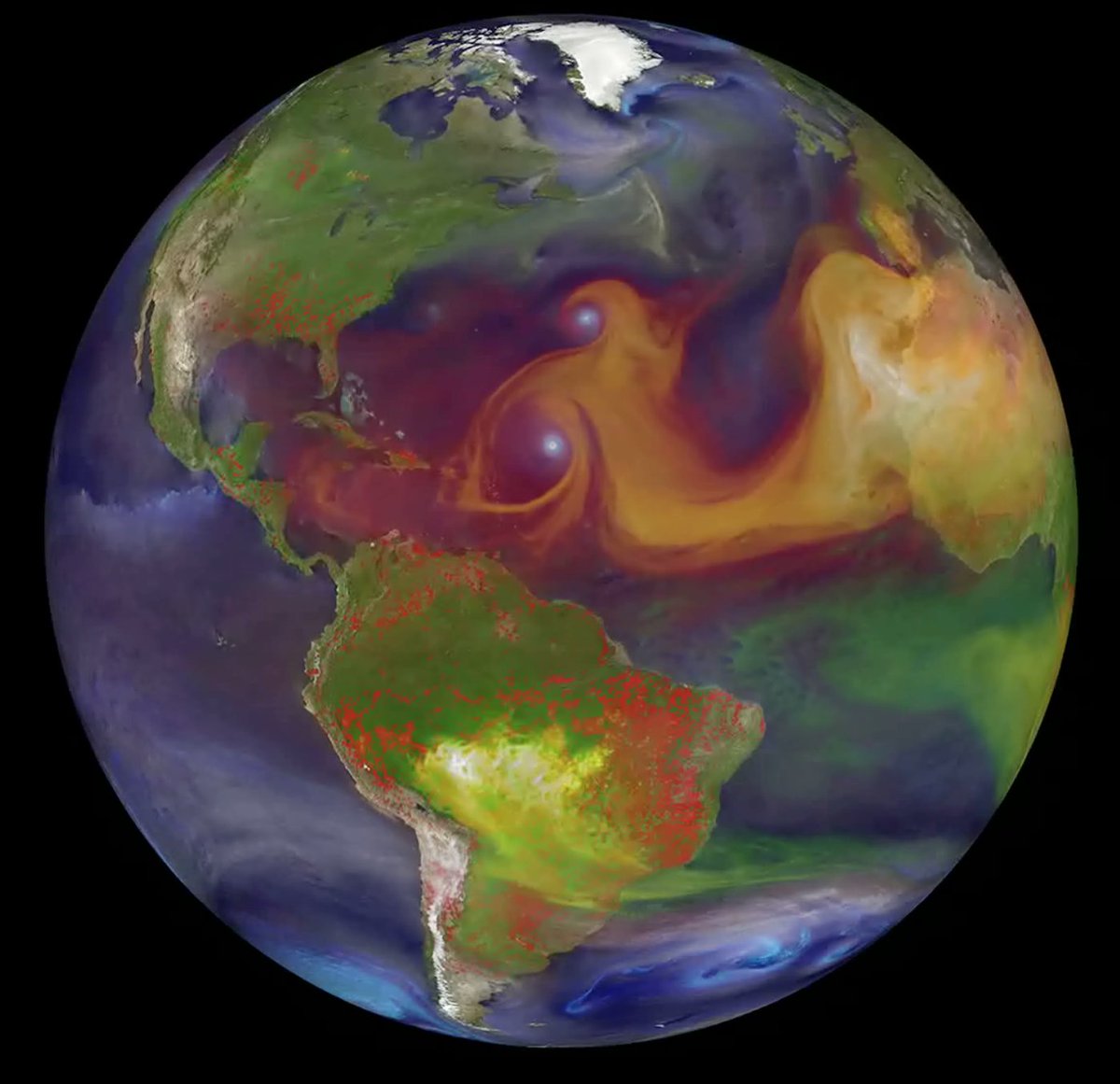 It's because some aspects of climate change are robust to model differences that we have confidence those aspects reflect reality, but of course we need to (and do) evaluate predictions of these models in out-of-sample tests (including but not exclusively the future). For example here are some climate model predictions made ahead of time: Mt. Pinatubo; spatial patterns; stratospheric cooling; reconciling paelo-data. And there are more. Indeed, the collection of models in the CMIP3 database (created in 2004), can also be tested against observations. 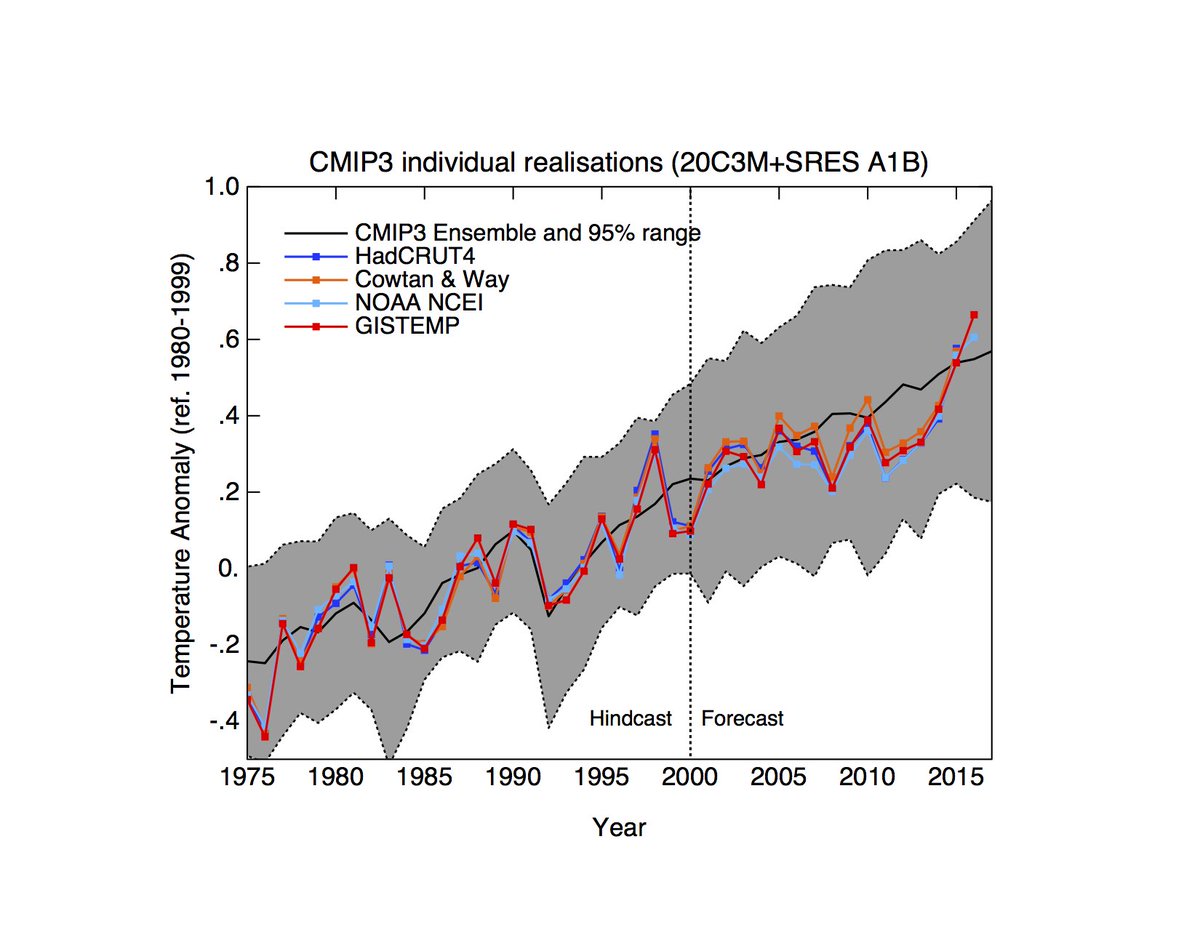 Adam's third point is just bizarre : All of the warming in the last 60 years is human-caused. See here for references. 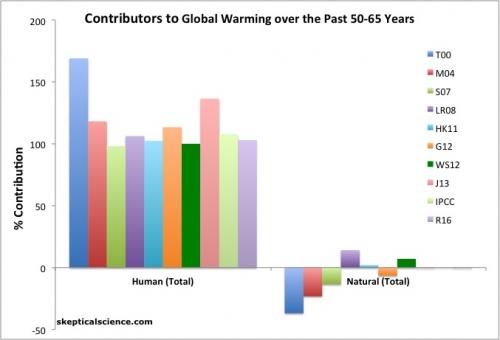 He is confused that the IPCC indicates that human contribution is actually more than the observed trend, but ignores the possibility that natural factors would have likely lead to cooling over that time. See here for more on that. 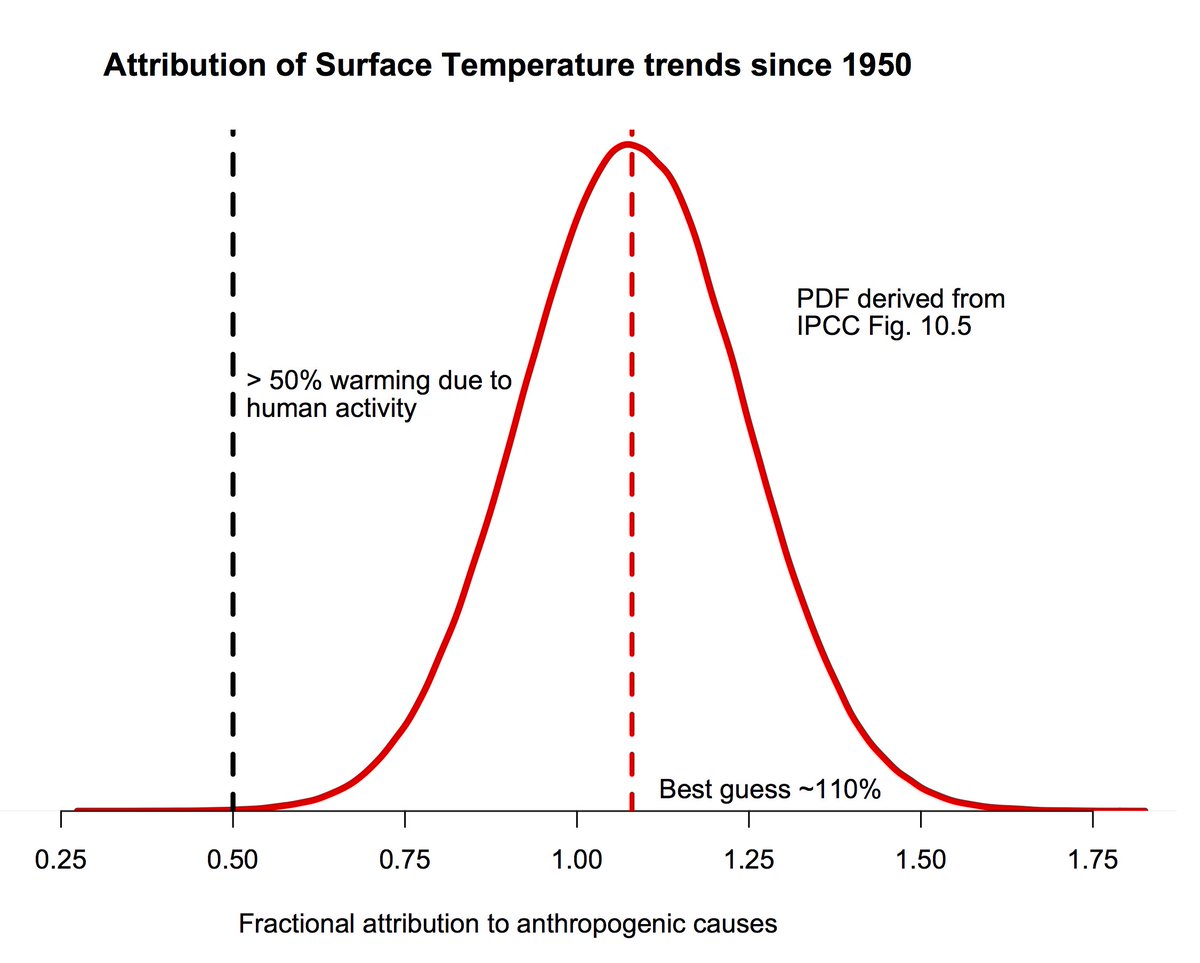 His fourth point is just off the wall. Someone else can deal with that.

Point five is just the 'climate has changed before' trope. Duh. Of course it has and for many different reasons: Asteroids, plate tectonics, orbital wobbles, evolution, volcanoes, the sun, fires, ocean circulation, etc. But just like a crime scene with multiple suspects, scientists look for fingerprints in the data to match up potential causes with reality. We know that orbital wobbles drove last 2.5 Myr of ice age cycles and that greenhouse gas and dust changes amplified them. We have good evidence Cenozoic cooling was due to decreases in CO2, combined with tectonic triggers that changed circulation, isolated Antarctica and set the stage for recent glacial periods.

All these past changes are fascinating and piecing together the evidence is fun but in no cases do we have as much information as for the 20th century. Our ability to pin down the details for the last 60 years is much, much better than for the ice ages (despite the bigger signal). A claim that attribution of recent change is compromised because attribution from some earlier, data-poorer period is unclear is equivalent to claiming that a recent murder conviction should be vacated because an ancient Roman skull has just been found in Europe.

(bear with me people, we are almost done)

Point seven : The earth has warmed as predicted you pillock. 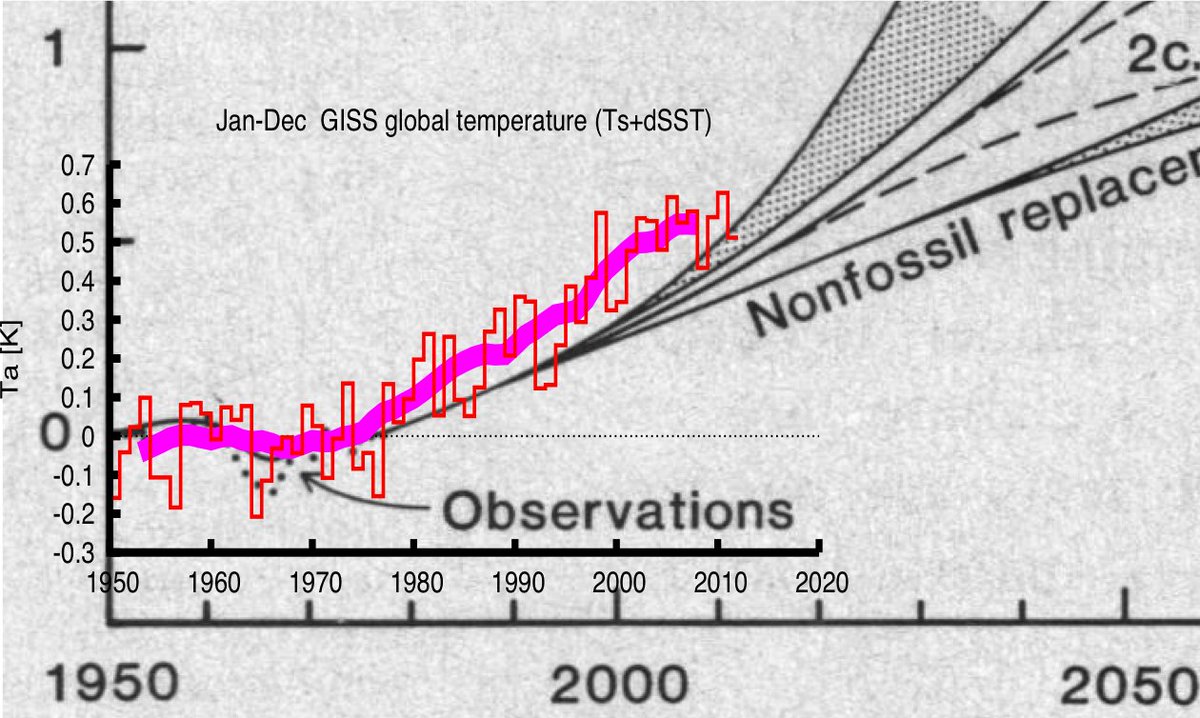 Point eight : Record high temperatures and the rate of warming are proof of something : that predicted changes in the system are occurring.

Point nine : Records break all the time, but not equally. Far more hot records are being broken than cold ones. 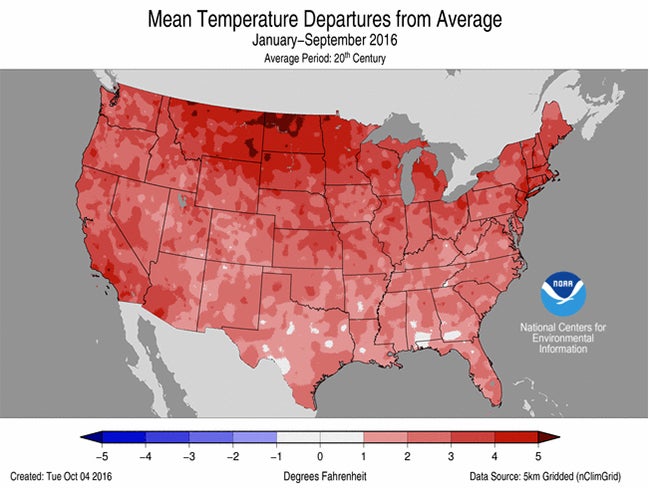 Point ten : Really ? We can't ignore deeper understanding of processes, better data, bug fixes over time. But the basic results have not changed.

Point eleven : No idea where his local beaches are, but insurance companies pay so much attention to SLR threats that you can't get private insurance along much of the East Coast.

Point twelve : Oh please. The issue is not the absolute temperature. If humans had evolved in the much-warmer Eocene, I'm sure we'd have been fine. Sea level was 80m higher and no-one could live in the tropics, so cities would've been built further inland/poleward. Unfortunately that isn't where people live now ! Roughly 100 million people live within 1m of high tide, many trillions of dollars in infrastructure too.  More than half the world lives in the tropics, farmers rely on climate (temperature/rain) to grow food etc. etc.

Finally, climate change impacts are happening now : Greenland's losing mass, heat waves are worse, rainfall more intense, Arctic ice is disappearing, permafrost is melting etc. It is neither a hoax nor a distant possibility. It's here, it's now and risks of much worse are real.

I'm sorry that Scott Adams feels that people are not respecting his oh-so-clever concern trolling. Truly. I mean, why aren't I being nicer ? Surely, I should take his well-meaning advice and up our communications game, convincing him and others that it isn't a hoax? But this misses this point entirely because scientists/communicators/National Academies have done all of these things and more for years. And yet, people like Scott Adams still repeat nonsense, choose to misunderstand points and prefer to argue rather than deal.

At some point, you have to ask yourself, maybe the problem is not the communications or the communicators ? Sure - we should continue to hone messaging, listen, adjust the frames, use trusted messengers, make better visualizations, answer questions, increase relevance but the deeper issues of why people selectively reject evidence that goes against their group ideology go mostly unaddressed.

I don't expect this tweet storm to impact Scott Adams at all. That wasn't the point. Sometimes it just feels good to vent. Done.