Stranger In A Strange Land

With the threat of a no-deal Brexit having receded, and maybe even having been shot in the gonads as it deserves, I was able to return to Cardiff for a holiday without fear of being stuck there. Not that being stuck would be an entirely bad thing, because Cardiff is a lovely place. I'd normally be content to sit behind a computer screen on top of a Cardiff hill instead of behind a computer screen in a Czech apartment, but fortunately, my girlfriend decided that this time we'd do touristy stuff.

First off, Cardiff in April/May is awash with bluebells... 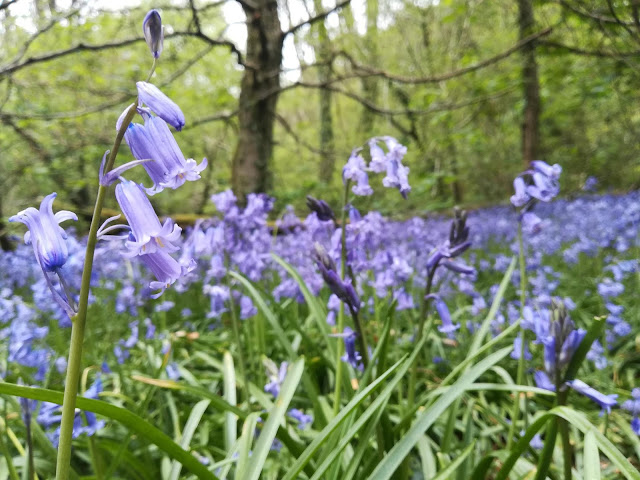 ... like, a lot of bluebells. Add in a happy little dog and what more could you want ? 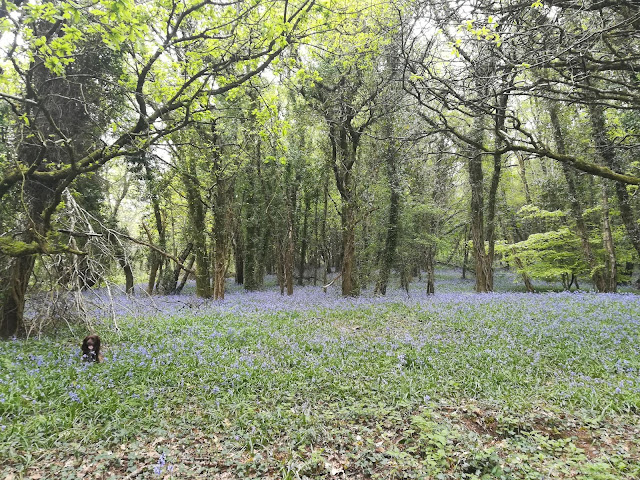 What's weird (like supernaturally quick-call-the-ghostbusters level of weird) is that the bank holiday weekend was sunny. Sunny ! In Cardiff ! That's rare enough at the best of times, but to get a nice bank holiday and a rainy week can only be due to the gods taking pity of the long-suffering people of the realm. So we went to Cardiff Castle, which, while not the finest castle Wales has to offer, is still a very nice castle : 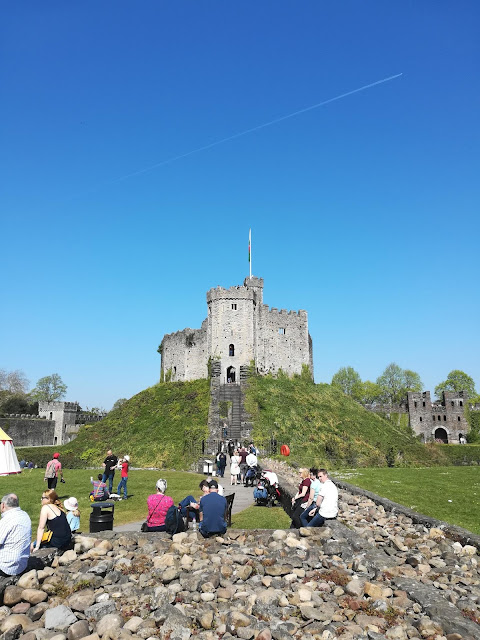 To be fair, since it claims to have the highest castle density in the world, "not the best castle Wales has to offer" is not all that much of a complaint really. 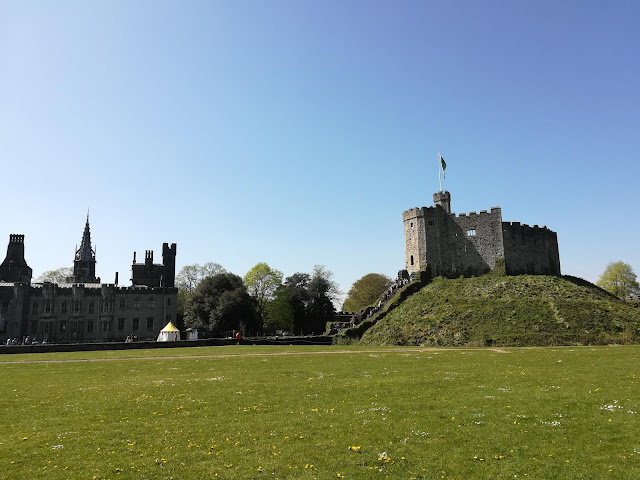 Most of the castle was "restored" in the 18th/19th century in a mock-medieval style, albeit following the ground plan of the original Roman fortress (a short stretch of Roman wall still remains). The only substantial bit of the medieval castle left is the Norman keep, which is at least a proper keep on top of a mound with a moat around it and everything. The view from the top is very nice : 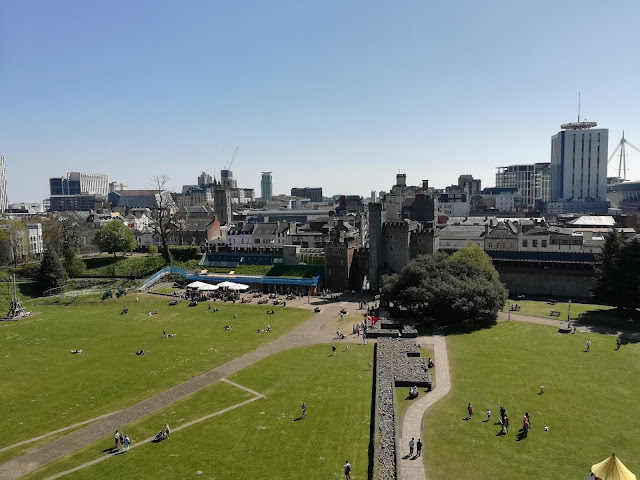 This being the Easter bank holiday, there was a small display buy a couple of medieval re-enactors doing swordplay and archery. 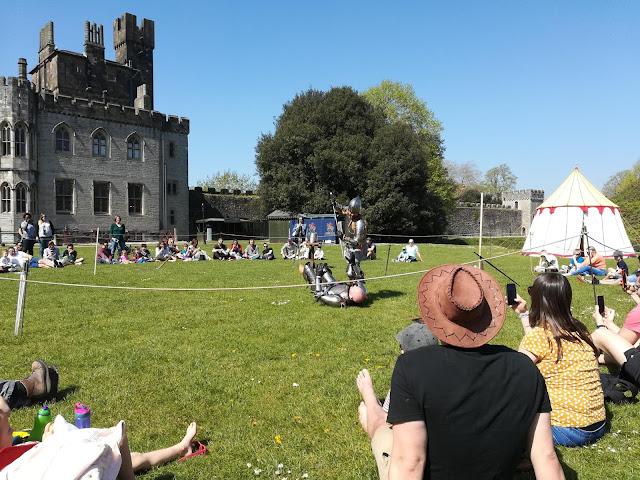 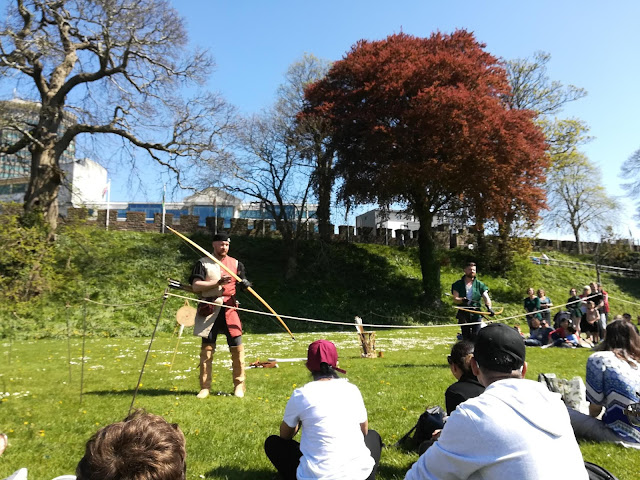 Which was very slapstick but also very informative. The archery contest loser was forced by the audience to name their bow, "unicorn sparkle fairy". But is that really such a penalty ? I mean, no-one really wants to get shot dead at all if they can help it, but to suffer the extra ignominy of being killed by a weapon that sounds so dripping with sugar that it would rot the teeth of a Care Bare, well, that's just cruel.

Cardiff Castle is also very nice inside, even if it's a complete Victorian fantasy with about as much medieval authenticity as First Knight. 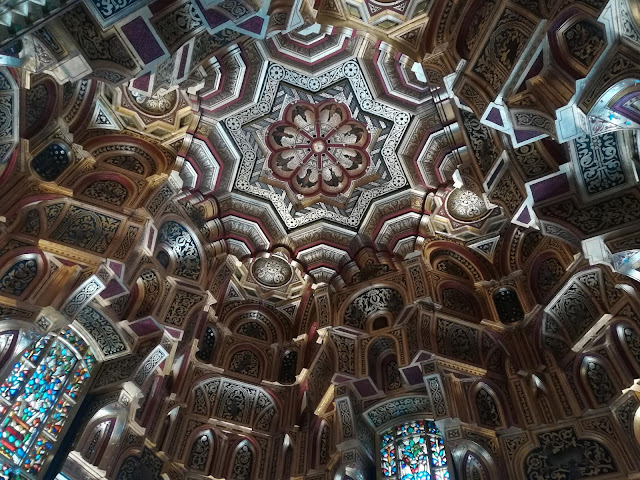 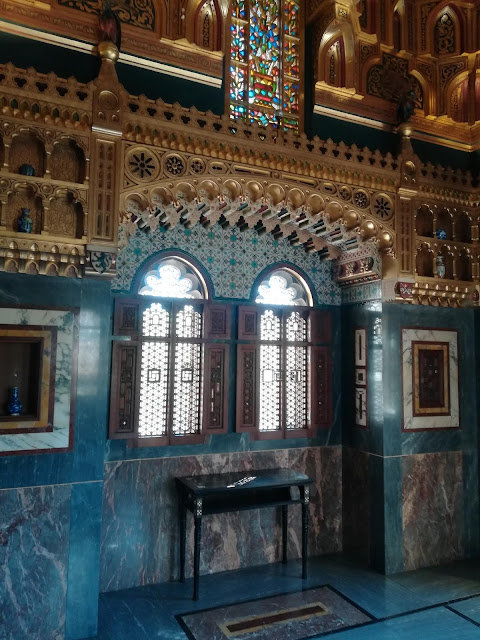 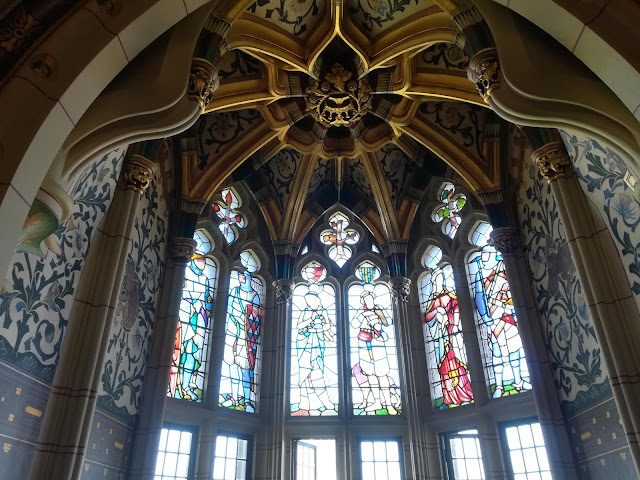 My favourite bit is the library. When I become a billionaire - as I'm sure I eventually will - I'm gonna have a library just like this. It's clearly far superior to the crappy library in Strahov monastery which you can't even walk through. 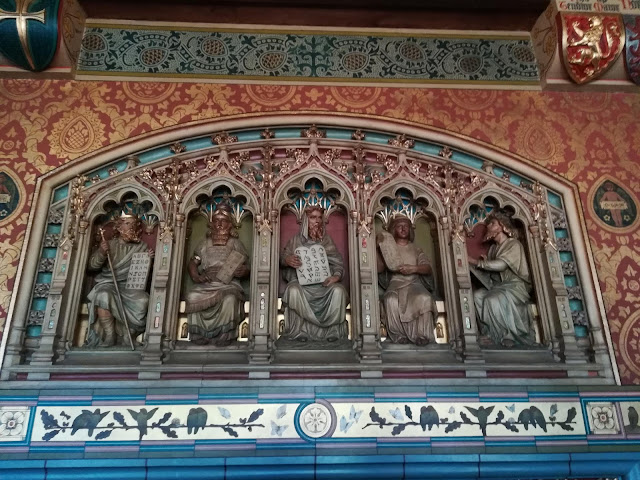 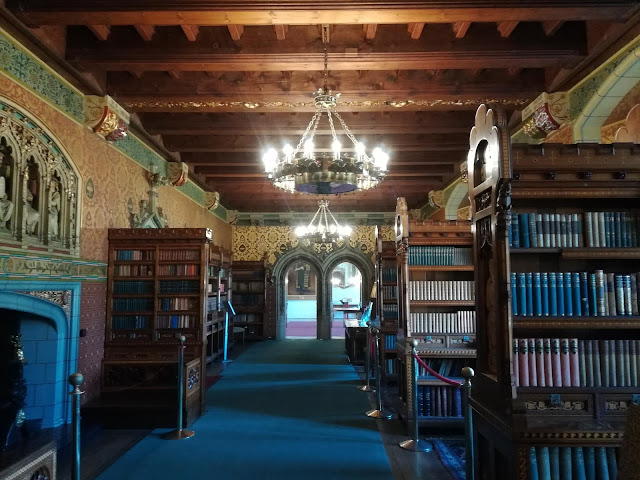 Quite often I might describe the Welsh as being a people who define themselves mainly by being Not English. This is not entirely untrue. But Wales as a nation - and it is a nation, and blast the eyes of anyone who says otherwise - is quite different to England. It defines itself through myth, mountains, mines, male voice choirs, mighty castles and massive rugby players. Most of which we managed to see something of on this trip. There wasn't time to make it all the way to Snowdonia - which is where Wales keeps its very best mountains - but we did make it partway up Pen Y Fan, the highest mountain in the south at 873 m. 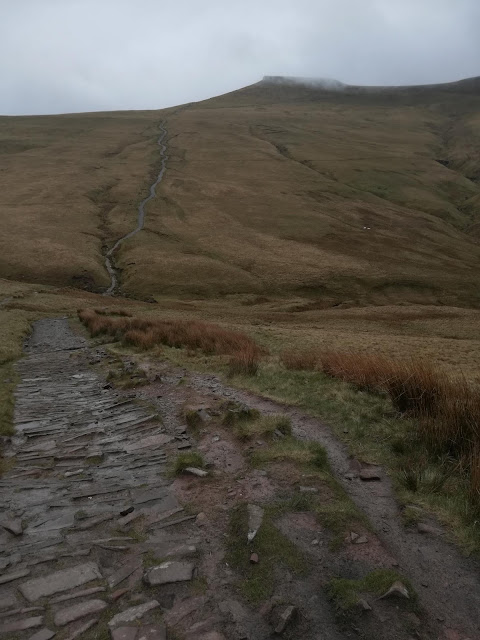 We made it most of the way up before we had to turn back to make the last bus. It was a rather bleak, windy day, and though it brightened up on the way down, the summit stayed in clouds, so going up any further wouldn't have accomplished very much. The main thing was that we got rid of Shirley's terrible Dutch allergy to mountains. 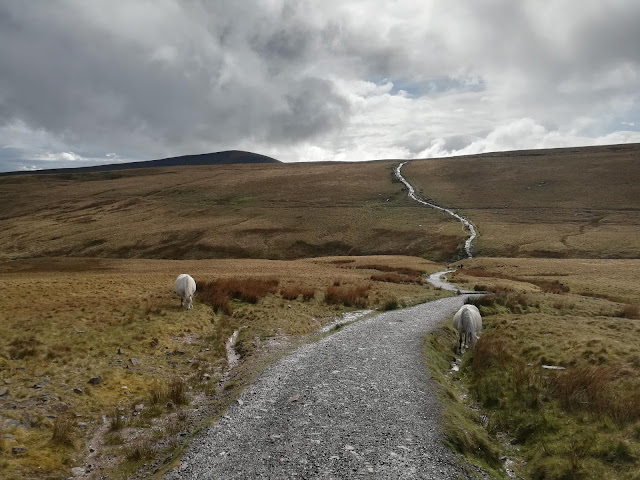 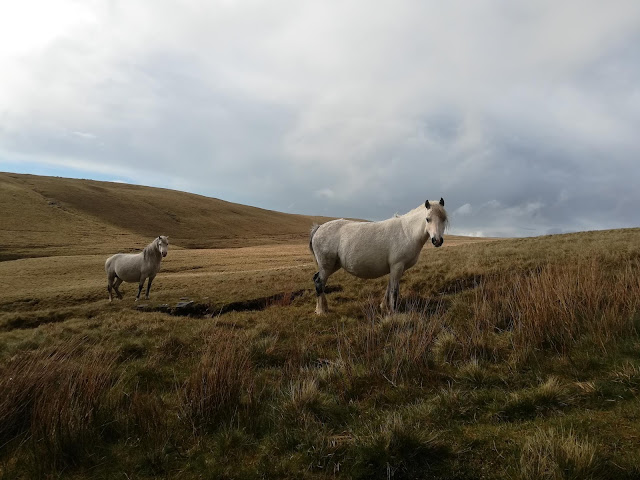 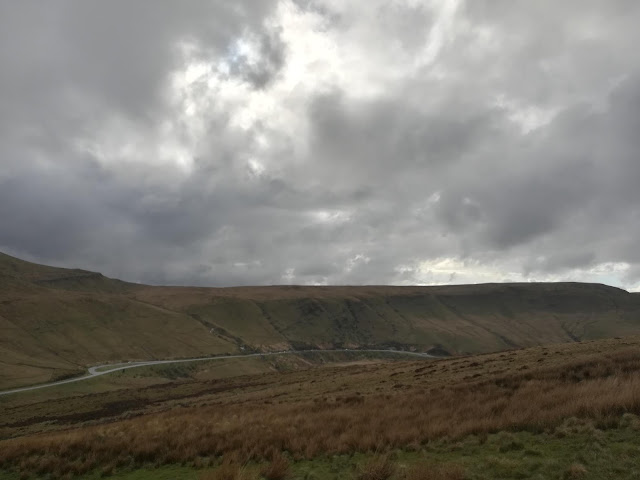 So that's :
Mighty castle - check
Mountain - check
Myths ? Well, we saw dragon models in the castle, so I guess, check ?
Massive rugby players ? Also check. I've never made it inside the 80,000 capacity Millennium stadium before so this was a great excuse to finally go. It looked a lot smaller than I was expecting, but this might be because we had such fantastic seats so close to the pitch. 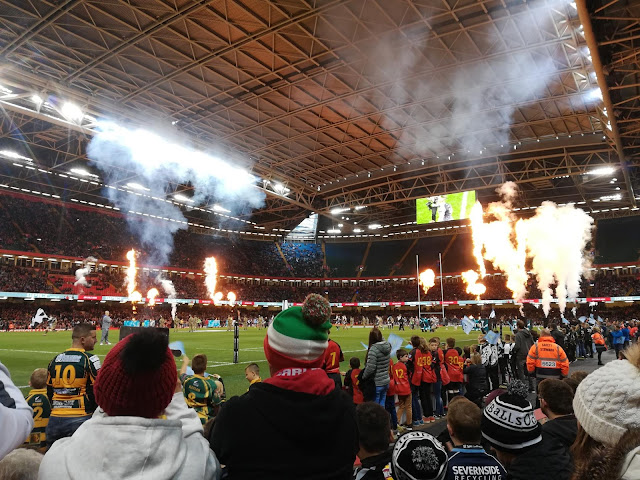 Rugby is Wales is more a religion than a sport. Can't say I know anything about it, because rugby in high school P.E. lessons was by far and away the worst thing about high school. Running around in a cold muddy field while it's pouring with rain in order to grab a ball you don't want off someone you don't know is at least as much fun as trying to use a very slow computer with very slow internet to send a very important email without having any tea and also someone is continually stabbing you in the eye for some reason. I didn't like it.

Stadium rugby is altogether different. There you're surrounded by tens of thousands of happy fans (for while football is a gentleman's game played by hooligans, rugby is a hooligan's game played by gentlemen) singing (Welsh fans don't chant; also check the male voice choir part of the Welsh experience) in support of their teams. Plus a bunch of fireworks, with a nice roof to keep the rain off, and a bar. And ridiculously good seats so you can see what's going on. Nor do you have to wait for 20 minutes every 10 seconds, because this isn't American football so play is much more continuous. All in all, it was a lovely afternoon.

Which means the old key Welsh thing we didn't do was go down a mine. That's probably a good thing, because we can save it for the summer - a surefire way to escape all that horrible Welsh sunshine.
Posted by Rhysy at Wednesday, May 01, 2019