I know I haven't been active here much lately, although things on the other blogs are in a bit better shape (though I do have a series of philosophy posts in draft and almost ready to go). I've been seriously stressed out about the whole Brexit thing and the possibility of becoming an illegal immigrant, so I've been throwing myself into writing code instead of blogs, which is a more effective distraction.


Who should I vote for ?

Since the three month extension all but guarantees my secure residency status, it's time to look at how the heck I should vote in the oh-so-exciting forthcoming election. Back in 2017, I felt dissatisfied with the traditional web-based questionnaires that assess who you should vote for based on stated party policies. So I wrote a little spreadsheet that takes into account other factors, like whether I trust the party to implement policy and/or adjust their priorities based on changing evidence. For example, I like some of the current Tory party policies (who couldn't like more public investment after years of austerity ?), but I wouldn't trust them as far as I could spit on them.

Here's the result from last time :

The "policies" score is based on the results from isidewith, which is pretty objective. All the other parameters are my own subjective judgements.

Two years later, have things changed ? Well, yeah, a bit. Not all that much though. For some reason isidewith doesn't give the results for Plaid Cymru any more, so I used the results of last time. Nothing was given for the Brexit Party either*, but they're not worth bothering with anyway. Also I included a weighting factor for each property in terms of how important it is to me (this turns out not to make much difference, at least when the differences are this stark), and give a percentage of the maximum possible score as a slightly easier way to compare the final results.

*I gave UKIP slightly different scores this time not because I felt sorry for them or anything, but just because I whimsically decided that a value of 1 is good enough to denote "utter crap" and it wasn't necessary to use smaller values. The main point is the final relative ranking anyway, not the absolute numbers. 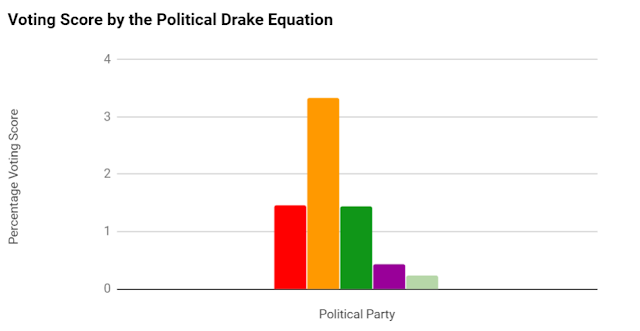 You can see that this is a much better way to distinguish between parties when their policies aren't all that different : my scores from isidewith are basically equal for the left and centrist parties, with a huge polarisation against the right. That the Tories and UKIP respectively reach 45% and 30% in terms of policies demonstrates that choosing by policy alone is a lousy idea - sure, I agree with them on some basic issues like being in favour of the judicial system and not torturing children, but that's not a sensible reflection on who I'm gonna vote for. For all the problems of polarisation, when it comes to making a decision, it's the differences that matter, not the similarities. I mean, I agree with Nigel Farage that oxygen is generally a good thing, but that doesn't make me any more likely to vote for him.

Anyway, the Lib Dems are still clear winners, but everyone scores lower than last time - nobody scores above a few percent. Most parties have one or two areas in which I agree with them to at least a reasonable degree, but none of them perform well in everything. Overall, given that things are so dominated by Brexit, I'm glad the opposition have rallied to try and stall things. I'm rather less happy that they can't agree on a damn thing besides delay : they missed their golden opportunity to chuck out Boris on a vote of No Confidence; all their talk of refusing pacts and alliances annoys me intensely. The very inability of anyone to compromise is precisely what's led the current paralysis*. Hence no party has come out of this unscathed.

* There is no contradiction between wanting more compromise and wanting Boris removed. Compromise is only possible between the reasonable and reasonably consistent, not with fickle nutcases.

(For those wondering, though I'm fiercely opposed to Brexit in any form, I have set out the sort of compromises I could accept here, and I'd probably be willing to go further than that, if pushed).

I will never for the life of me understand why Parliament didn't do the feckin' obvious thing of going back to the people. Fair enough that Theresa May decided to act like a traditional majority leader at first, but after losing a vote by the largest amount in history, it should have been obvious that a radically different strategy was necessary. At a minimum, the Brexit negotiations should have been cross-party, because this is an issue that effects everyone. More realistically, a second referendum would have been a decisive way to break the deadlock.

While I've never seen a second referendum as anti-democratic, I've always accepted that those saying this is potentially voting again until you get the right answer have an entirely valid point. This was because I lacked the general criteria as to how to judge when a second vote is legitimate and when it's not. Very helpfully, Bercow provided the answer of substance and circumstance. Repeatedly asking people an identical question in identical circumstances is not democratic, hence he chose not to allow the government to bring back a bill within 24 hours of it being shot down. That these criteria have actually been used to prevent repeated votes makes them especially appealing - no-one can say that you can apply them to get repeated votes whenever you feel like it, because you can't.

A second referendum would be clearly different in both circumstance and substance. Circumstance we need hardly bother with, that is obvious. But in substance too the difference would be clear. The original question simply asked us if we'd like to leave or not. The new question would be a choice of staying in or going out under very precise conditions. That's like asking someone, "wanna go out tonight ?" as opposed to, "wanna go for a cocaine-fuelled orgy where everyone dresses up like farmyard animals, or stay in ?". Those questions are fundamentally, undeniably different. Yes, they admittedly share one common option, but the other options are not the same at all.

But I digress. None of this helps me decide who to vote for. The Liberal Democrats get extra bonus points here because of the candidate they're fielding in the constituency I vote in : 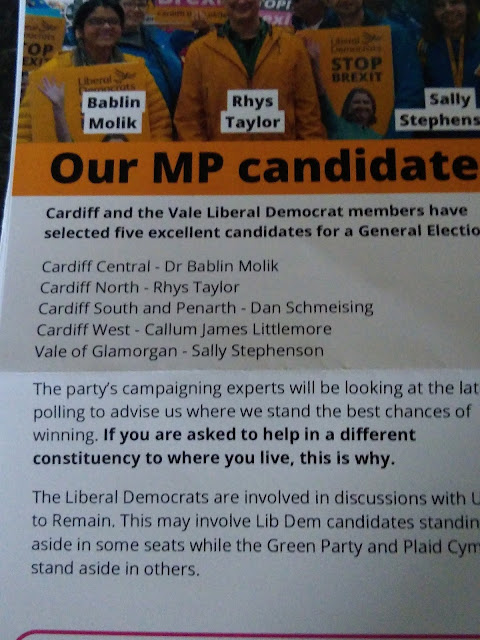 The problem is that Cardiff North is traditionally a Labour-Tory marginal, so my vote is potentially very influential. So my conscience says "VOTE LIB DEM !", adding, in a loud shouty voice, "HIS NAME'S LIKE MY NAME !". But my brain says, "err, well, are you sure... ?" rather more quietly while biting its lip and looking worried. I'd rather have the Lib Dems over Labour, but in Cardiff North that doesn't look like a realistic choice (my ideal choice is, as it has been for some years, a Labour-LibDem coalition). Am I handing victory to the Tories by voting for a third party in this case-? I don't know - I'm going to have to wait and see how thing develop. First time for me that a campaign could actually change how I'll vote.

Had this been another case of May-vs-Corbyn, I would have chosen the Lib Dems without hesitation. May and Corbyn were and are about equal but different varieties of awful, so choosing between the two made no sense - I might as well vote according to my principles, which I did. But now it's Boris versus Corbyn, and that's rather different  Is Corbyn awful ? Oh my yes, but Boris, to me, is unquestionably worse. If Corbyn is like eating a shit sandwich, whereas May is like eating a shit hot dog, then Boris Johnson is more like being raped by a bear. It's a whole other level and kind of awful. Corbyn's weakness is that he never changes his mind; Boris' that he doesn't have one. With Corbyn, policy-wise one knows what one is getting - with Boris it's equivalent to putting one's hand in a lucky dip that contains some boiled sweets, and old sock, and a nest of scorpions.


What fresh hell comes next ?

As Plato says, we shouldn't just examine issues in isolation but also consider consequences. There are all kinds of possible outcomes to whatever happens next - I don't want to guestimate probabilities, but just to set out possibilities for a roadmap of what to do in each eventuality.

These are all obvious. More complex possibilities open up with a hung Parliament. Here things get very tricky indeed.

No numerically viable coalition looks workable in practise at this point. If politicians have any sense, they should start asking the EU right now what they'd do in these scenarios. Asking at the last minute, presuming that an extension will be granted, is bloody stupid. The French strategy of continuously appearing threatening and then acquiescing at the last moment every time is a good one, and perhaps that's their whole game plan (but equally they might be really getting sick of the whole sorry thing). But there's no guarantee that applying pressure to a totally deadlocked Parliament would actually help - it could well result in Parliament simply doing nothing, and crashing out without a deal through default. Even if the EU tried to save us from ourselves by strongly encouraging a second referendum, there's no guarantee that a poorly-hung Parliament would actually do it.

To my mind, in the event of a hung Parliament a second referendum offers the only way forward. But then, it's obvious to me that Boris Johnson is a dangerous buffoon, whereas apparently this - astonishingly - isn't the case to almost 40% of the public, something I cannot for the life of me understand. So what the hell would it take to force Parliament to make a bloody choice ?

The biggest problem with our electoral system is that it's incredibly limited. When I vote for a candidate, I don't specify if I'm voting for them or their party. I may or may not be choosing to put that party in power : I may want them to be in a coalition government; I may only want that specific individual in charge of my constituency; I may not even care about the candidate and just want to vote nationally. There's no way of knowing. There's no perfect solution to this and I have no revolutionary idea. I just want people to start thinking about ways to vote for things we actually want, rather than voting against thing we don't. But I expect such a vision is just too darn Utopian. Ah well.
Posted by Rhysy at Monday, November 18, 2019