Remember how this blog used to be full of wacky adventures and not long cynical rants ? Well today I've got the least cynical thing ever : a PUPPY ! 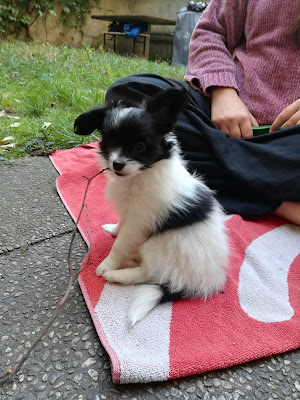 We already have one papillion, Lulu (a.k.a. Cthulhu), and some time ago we decided we wanted another. We made a preliminary visit to the breeder a month or so ago just to visit the horde of dogs, which was exactly as much furry chaos as you'd expect in a tiny two-room apartment filled with (I believe) a total of no less than eleven crazy little butterfly dogs. The breeder is a woman absolutely devoted to her dogs, which is probably why she produces such excellent little nutcases. 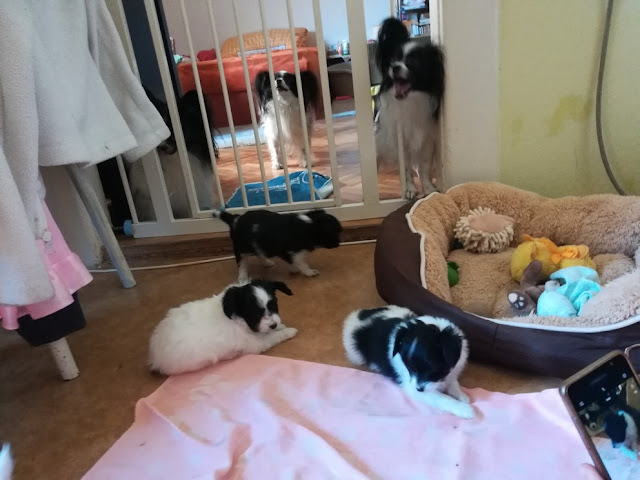 Little Lulu was not terribly happy about returning to the nest, but then, being mobbed by a bunch of tiny lunatics would be a distressing experience for anyone. Eventually she settled on keeping as far away as possible from the rest of them and occasionally venturing to inspect the puppies when the adults were out of range.

Not that the other papillons were at all keen to give her any personal space. Lulu's travel bag was particularly popular.

The nightmare over, we returned some weeks later to retrieve her half-sister Gigi (we couldn't decide on a name, but the dog responds better to Gilly, so we're mostly going with that). It's always hard when a puppy leaves home, but she soon settled into her travel rucksack and slept pretty much the whole way back. 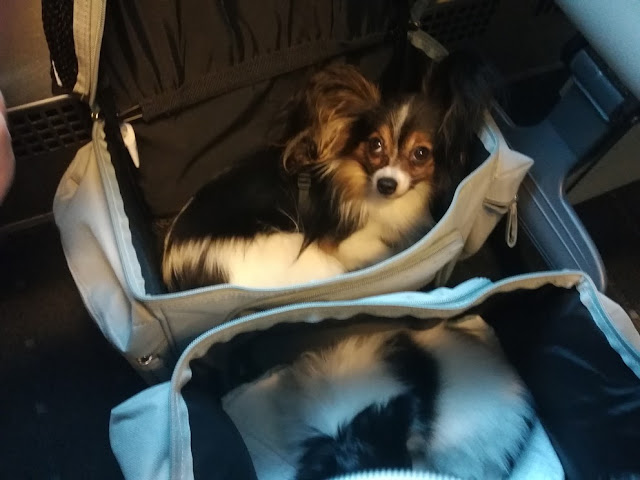 (Incidentally, we've made three trips during the pandemic - once to Germany when case numbers were near their lowest, and twice to Brno for puppy inspection/acquisition. Of those two trips one was by car and the second by train. Covid restrictions are limited to wearing masks, but there being only two or three other people in the compartment, this doesn't present a risk nearly as high as being in the crowds in Brno itself. But if I say any more on that I'll become cynical, which I've banned for the duration of this post.)

There being no real prospect of travelling outside the Czech Republic for the foreseeable future, we took two weeks of holiday for a staycation. During that time, we did exactly nothing except binge watch TV and play with the puppy. And there are far worse ways to spend a holiday. I think I'd probably do extremely well on a long-duration space mission : only give me my creature comforts (pun intended) and I'm happy indefinitely. The hard part would be persuading me to go in the first place, not dealing with the stresses of travel so long as there was sufficient Netflix and tiny doggies.

Anyway, it's already hard to believe just how small she was on that first day : 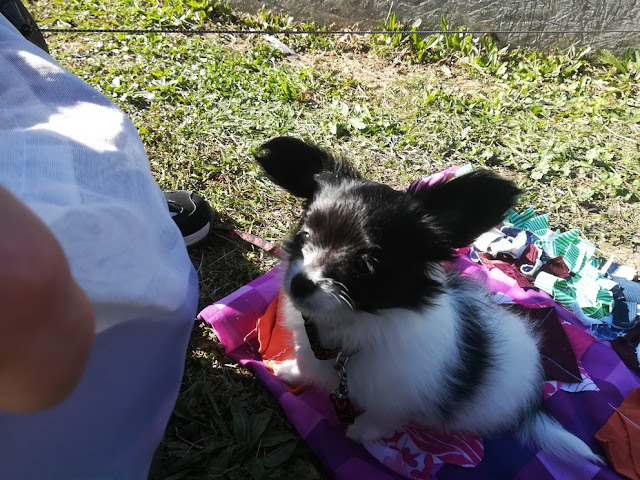 It took about a week for her to learn to hold both her ears up. Now she looks a lot like a bunny, especially when she goes hyperactive and charges around the garden at full speed. 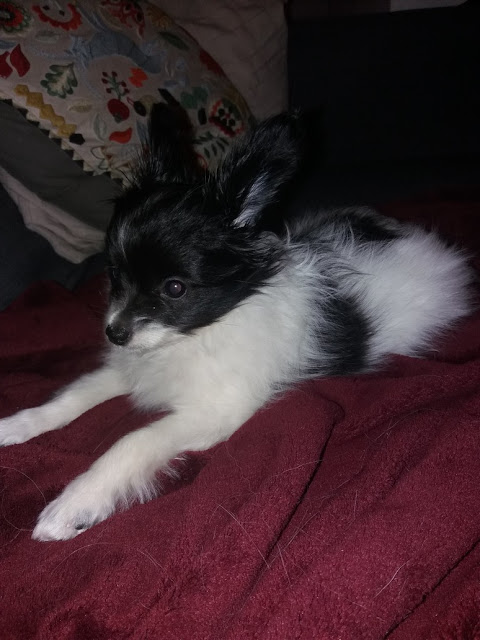 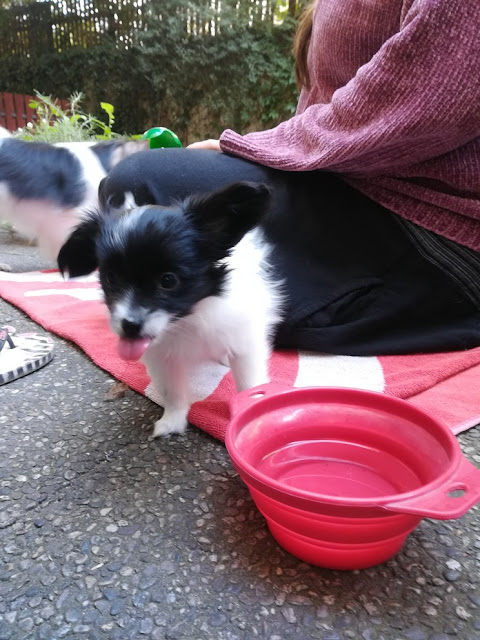 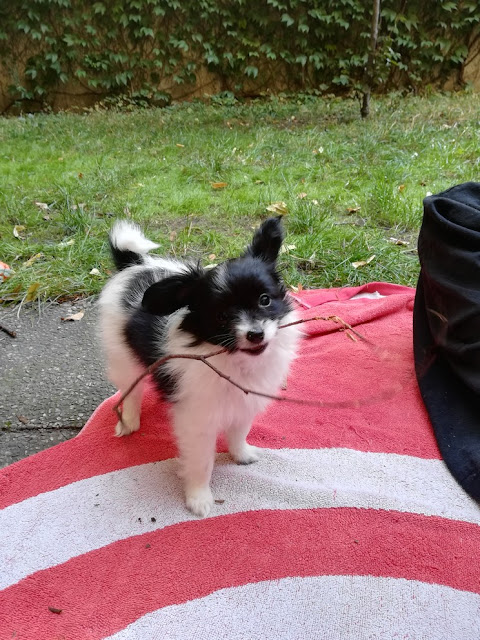 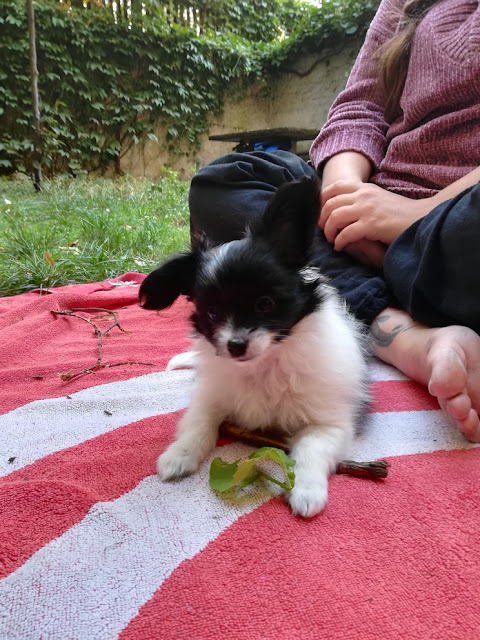 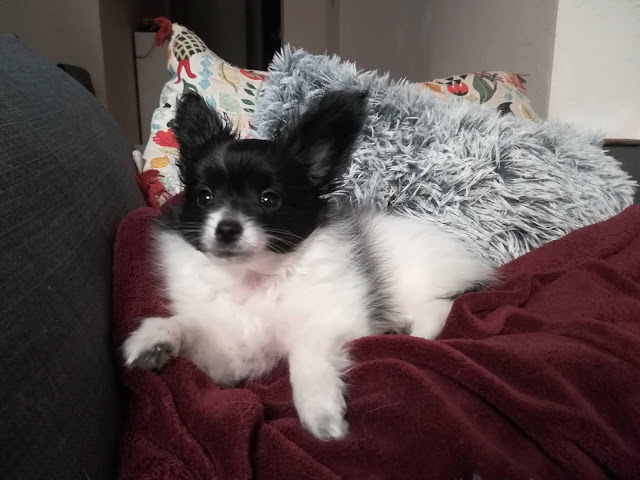 Gilli treats other dogs with sensible caution, not running away from them but not getting too close either. Which is exactly what you want when they're a full thirty times heavier than you in some cases. 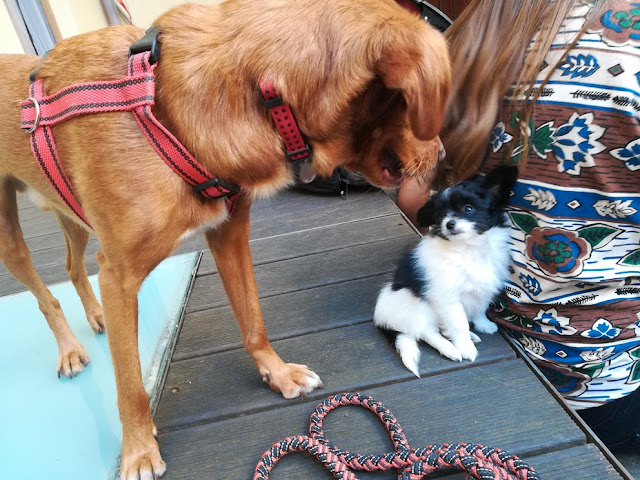 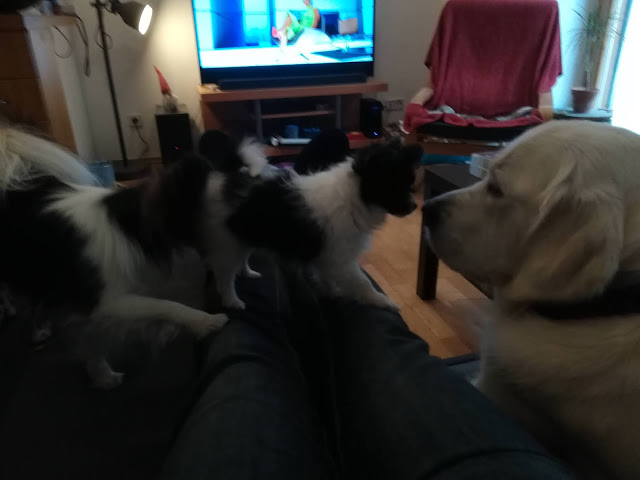 Getting Gilly used to Lu is easy. Getting Lu to accept Gilly was a longer processes but not all that bad in the end. Lulu is very particular about other dogs and especially doesn't like other dogs touching her, although she's generally more tolerant of tiny puppies. Still this meant a few massive over-reactions with Lu going into full-on explosive mode when Gilly got too close, but in a week this was over. In a week and a half they were playing and cuddling together. Lu has learned she just has to stare menacingly at Gilly when she wants her to back off, or maybe give a warning growl, and not turn into a fluffy hand grenade of death and destruction. We did this with a combination of shouting at Lu for misbehaviour and bribing her to come close to the puppy with treats and enormously exaggerated praise. And it worked perfectly. 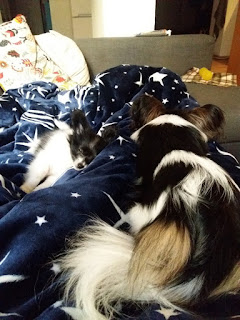 But alas ! Poor Lulu is a victim of this success. One evening during puppy wrestling Lulu gave a rare yap, then carried on as normal until they both collapsed from exhaustion. The next day her eye was swollen and she looked like a pirate, but it seemed to be improving. The day after it got worse again so we took her to the vet, expecting she'd need eye drops... 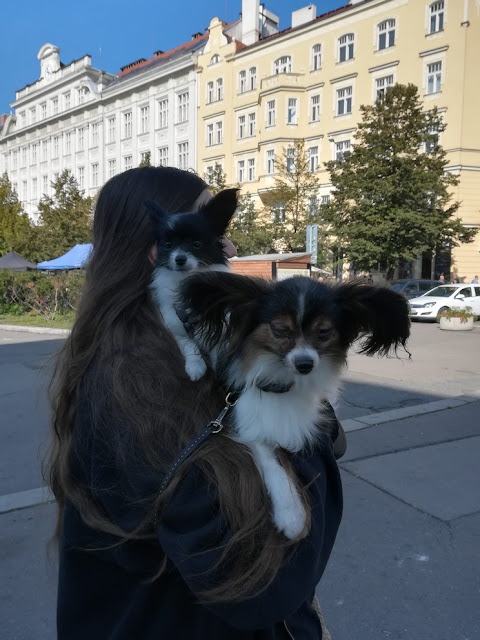 ... only to discover she needed eye surgery to save the damaged eye ! Fortunately they were able to do that the same day and it took less than two hours. She's now doing well, getting a bit more active each day, and is expected to fully recover with both eyes completely back to normal in a couple of weeks. She's starting to want to play again, though this is very difficult on account of the lampshade, and able to tolerate "Gouger" running underneath her (still being a tiny bunny, even if she is a bit bigger now). So all is well, and once again working from home has proven a godsend. The fluffy adventures shall continue. 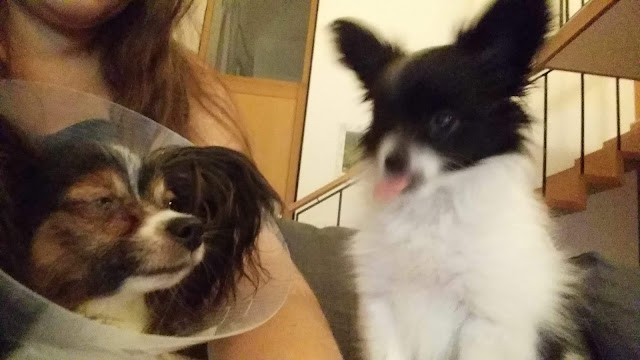