Following my recent completion of GTA IV, I thought I'd have a bash at what I guess you'd call GTA IV.V (strictly speaking that should be GTA IV S in Roman numerals) : The Lost and Damned and The Ballad of Gay Tony. Rather irritatingly, they're not expansions but standalone games, eating up another 16 GB of hard disc space. That's not a big deal, but they appear to share the same savedgame directory as GTA IV. And so, with the unstoppable inevitability that only narrative causality can bestow, my "story complete" saved game from the original has now gone.

I can only assume this part of the code was written by Muppets - most likely, Animal. It doesn't matter how many "Are you sure ?" messages are present, if you have a 40hr saved game file in a directory where other save games can be written, it is absolutely and irrevocably destined to be overwritten. Good job there's no point playing when the main story is complete, I guess.
﻿﻿

This aside, the Lost and Damned is a decent addition to the GTA canon. You play as Johnny, a walking cliche who's second in command of biker gang "The Lost", previously encountered in the original game. Happily, bike physics has undergone some kind of Newtonian/Einsteinian revolution, so now you can cruise around without fear of suddenly finding yourself 70 feet up in the air because you got too close to an especially pointy bit of tarmac.

That's far from the only niggle the game irons out, either. For starters, it's now much easier to evade cops at the 3 star level. Once you're about halfway to the edge of the circle, the cop spawning rate drops dramatically. This doesn't detract from the challenge of the game, because it's skillfully balanced by the increased difficulty of combat. Enemies are not only more aggressive, but there are far, far more of them. Hiding behind cover will only protect you for so long.
﻿
﻿
To help you combat these hordes of unruly foes - usually other gang members, but also cops - you're given a selection of handy new weapons. First up, the grenade launcher. What does this do ? Lob grenades. Hmm. I could do that before, actually. With my hands. Yet it's strangely fun, probably because it makes a satisfying "thwoonk" noise. Then there's the assault shotgun, which is surprisingly poor as an anti-personnel weapon but very useful against vehicles.

There are a few totally new features introduced, like riding in formation to replenish your health and armour. 's alright I guess, but a bit of a chore. I'd rather just pay $1 for a hot dog from one of those foul-mouthed street vendors. You also get gang members to come and assist you on your travels, and if they survive they gain experience and toughness. Meh, I find it very difficult to care about any of them. It's far more fun to think of them as extra targets.

The downside of the game is the story. Like GTA IV, it's trying to be gritty and edgy but even more so. It's even more difficult to empathise with your character than Niko, because this time you play an annoying, fully-developed bad guy who's really nothing more than that. There's precious little joy in any of the missions (with the occasional exception) and far too much angsty "Oh woe is me, for I live such a hard and terrible life as a drug-dealing loser making buckets of cash off other people's misery but I'm just too much of a douchebag to do anything about it." Can it, Johnny. I expect this sort of nonsense in The Wire, not video games.

﻿﻿
Which all meant that I got a bit bored after a while and stopped playing. Fortunately, the Ballad of Gay Tony is almost the polar opposite of the Lost and Damned. Here you play the sex-crazed Luis Lopez, assistant to nightclub owner Tony Prince. While the writers can't quite seem to bring themselves to lose the angsty gibberish entirely, they have at least seen fit to introduce Omid Djalili, attack helicopters with rockets, base jumping, a decent checkpoint system*... and oh yes, a tank.
* It's on your phone. Possibly it was there all along. Umm.... 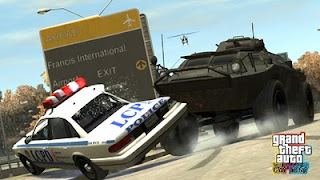 Like LAD, combat is far more intense than the original game. This time you get some pretty cool new weapons, like sticky bombs, a minigun, and the overwhelmingly powerful explosive shotgun. You get to blow up a large yacht. Skydiving becomes an integral part of the game, with one mission requiring you to go skydiving to steal a tank for Omid. What's not to like ? In another, you stand on the back of a moving subway train and use your explosive shotgun to take down wave after wave of attack helicopters.
﻿﻿﻿
﻿﻿﻿
The story line is... umm... well, I assume there is one, somewhere, but I didn't notice. I was too busy making things explode, which is all I've ever wanted from the game anyway. There's a nice variety of side-jobs that make the "pick up some stuff for Jacob" of the original look like even more pointless than they actually were. In place of boring driving missions you now go skydiving, get in involved in powerboat chases to steal drugs, and play golf*. Luis even has a day job as a nightclub manager. Unfortunately this last consists of you walking slowly (very slowly) around the club looking for trouble, and has all the engaging gameplay qualities of rancid cheese. Oh well, can't get everything right.

Alas I could not complete this expansion, although I really wanted to. One particular mission crashes about halfway through every time, and nothing I can do prevents it. Ah well.