Well, here I am again, back from an unsuccessful whaling expedition out of Boston. Didn't see a single thing, thus missing out on any number of inappropriate Moby Dick quotes. Some people might be a bit mad at spending $50 on a boat trip across the freezing wastes of the Atlantic with a constant gale-force wind and nothing to show for it. Well, I'm not mad, I'm madness maddened. There ! Obligatory Melville quote achieved.

The aquarium did give everyone a replacement ticket, but it's only valid until October (when the whaling season ends). Which means, I suppose, that I'll have to go back to Boston in the next few months. Oh deary deary me, what a terrible shame that is, having to visit a city so civilized that they cut  bagels by means of a conveyor belt and a circular saw. They even sell Magners, which gives them at least 10 million brownie points.

Boston is much like any other European city, except that it's a good deal taller and newer. Unlike the Arizona town of Flagstaff (featured on my previous visit to the States), whose "historic" district was built in the laughably recent 1900, Boston has some claim to history, dating back to the 1600's. Lots of stuff happened here relating to the Skirmish for Independence, apparently, and the local colonists have even built an obelisk to remind themselves of the British troops beating them into submission at the Battle of Bunker Hill. 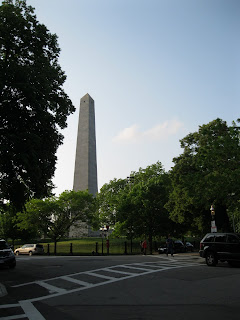 For some reason these trifles of history haven't stopped the Bostonians from having a peculiar penchant for "British" brands. There's even a shop called "Fabulously British" which as far as I could tell sold a lot of outfits in Union Jack design but with flashy colours  (except that they'd spell it without a u, thereby proving themselves to remain merely ignorant colonists). Other places seem to venerate British cultural sophistication, leading me to strongly suspect that few of these people have ever visited Cardiff on a Saturday night.

Another bizarre aspect of Boston is that they have an affinity for weird names, some of which are ironic, others just plain odd. There's the 20-storey Little Building, the chain restaurant of Legal Sea Foods (its Illegal counterpart doesn't exist as far as I know), and my favourite, the ABCD University. Apparently this is a school for over-age and/or under-achieving students, but no-one thought this name would be cruel. Strange people.

Despite these oddities Boston appears to me to be about twenty million times more culturally sophisticated than Puerto Rico. It has public transportation. It has parks. It has concert-halls and theaters are abundant. It has cafes which sell tea, although it isn't very good. Maybe they're still dredging it up from the harbour after that little tea-party fiasco. 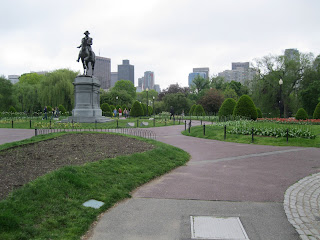 It's also rich. Really stinking rich. So rich that the AAS opening and closing reception were held in a ballroom, the kind where you'd expect someone to shout "Oh, Mr Darcy !" rather than discuss the funding situation for the James Webb Space Telescope. The rest of the city is also hopelessly trendy and full of hip young people who seem to have walked straight out of an American teen movie. This kind of happy, can-do attitude to life annoys me intensely, but I'll forgive the Bostonians because they've created such a nice place to live. 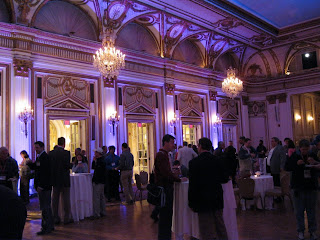 Well this isn't a science blog and God willing it never will be, so I'm not going to mention the conference at all. My re-introduction to Puerto Rican life began at the airport, when the plane was delayed by an hour because the cleaners hadn't shown up. Back at the San Juan airport, the scheduled taxi driver didn't show up either. Perhaps he was eloping with the cleaners.
In other news, this blog has seen a weird surge in views while I was away. Partly this is due to the WHY ?! post, written at a low ebb while struggling with driving tests. Suddenly its page views have shot up from nearly 0 to 35 at the last count. This, I suspect, is not due to 35 random people suddenly caring about the motivations of an astronomer, but probably because it uses an image from a Pirates of the Caribbean movie, and a new one's just come out. Though quite why the total views for this month (something approaching 500) are about double last month's, I've no idea. Still, if ever there was call for an image of Ian McShane, this is it !
Posted by Rhysy at Monday, May 30, 2011