Just where is it I live, exactly ? Not a difficult question, you might think. That's why we have things like street names and house numbers. Except that such things seem beyond the dreams of most rural Puerto Ricans. Like rural Britain, the place is chock-full of small villages you drive through in under half a minute, all containing a few dozen houses, a pub, a church and/or school. But no dinosaurs, despite appearances. 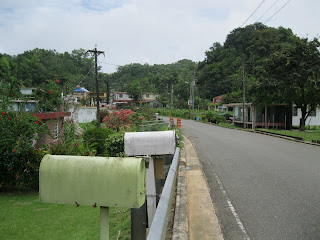 But that's where the similarities screech to a halt. In Britain the current village you're entering is clearly and reliably signposted. In Puerto Rico this is not so, so you have to pay careful attention to where the signs say the road goes. and then more or less guess when you think you've arrived. Of course, all the locals know which place is which, but they don't seem to grasp the concept of "visitors".

Then there are the places themselves. Naturally the architecture is completely different, the pubs are actually bars, and I have no knowledge of the churches and don't intend to. The schools, then. Each one comes with a speed limit zone (15mph, strictly enforced - if the police are actually around, no speed cameras) clearly marked by solid yellow lines across the road. Fair enough, except that these low speed zones occur in the most unlikely and implausible of places (i.e. on 40mph highways with concrete crash barriers on either side), and in such numbers that the locals must be, shall we say, prolific.

But what if you're not looking for a school ? What if you want to visit a particular house ? Well, you can't, unless you already know precisely where it is. There are no house numbers because there are no street names, because there are no streets. Alright, there might be roads with houses on, but in most villages there's only a single road (and innumerable side-roads, which, I assume, lead to the dinosaur pens) so no-one has seen fit to bother naming them. This is almost as true in Arecibo itself as the rural environs. Although it claims to be one of the larger cities in Puerto Rico, it's actually even less of a proper city than Milton Keynes. What is actually is is a collection of buildings that are in the same place only in the sense that they're all in Puerto Rico.

Things are, in fact, more clearly marked along the motorway, as there are distance markers every 100m. That's every hundred meters. Along a road where exits may occur every 10 miles or so. This is so pointless I can't even see anyone saying, "It seemed like a good idea at the time", because it quite clearly wasn't. Oddly, no-one pointed out that it would have been infinitely more useful to devote the time and energy wasted making these thousands of markers to making street name signs and house numbers instead.


Which leads me back to the original question. In short, I have no idea where I am. I know the village name only because people have told me. I could get a mailbox, but that's a) very difficult and b) costs money. My mailing address is - like everyone else - my work address, for simplicity's sake. Now the really strange part is that my residential addresses for water, electricity and cable are all different. Thank Gods I didn't have to sort that stuff out from scratch, because I'm buggered if I know how to do that.