The Ocean is Gone

America is a very great nation. It has given us root beer, the ice cream sandwich and The Simpsons. It may even have helped us out in a couple of world wars, if only to turn up late and complain about the weather. However, we must forgive our colonial brethren their late entries. It isn't their fault that their knowledge of geography is so bad they can't locate the ocean on the map, so I expect they just got a little lost along the way.

Alas, I'm not going on a random anti-American rant. Unfortunately, the above statement is literally true, albeit exaggerated (but only very slightly) for comic effect. For Americans - and Canadians too - have absolutely no knowledge whatsoever of the Southern Ocean. Even if it's printed in great big letters on the map (as it happens to be in the world map I recently bought from Amazon), they vigorously deny its existence, preferring to claim that the map-maker must've been drunk and/or incompetent. 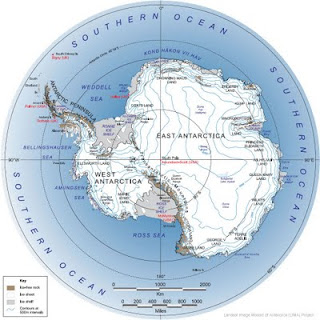 Such strange ignorance is not some unfortunate oversight on the part of an individual, although that would be bad enough. No, every single non-U.K. citizen is completely unaware of one of the great geographical features of the world.
Reactions to seeing it displayed on a map have been wide-ranging but entirely negative, as though they've just been told the Atlantic is a myth. The most thoughtful retorts have included, "Oceans are between continents, not around them", and, "but where would you set the boundary ?", as if the rest of the ocean is divided by border fences or something.
The majority, however, are more scornful :
"The Southern Ocean ? Where is that, Morrowind ?"
"You need to be able to differentiate between fantasy and reality."
"Where's your Northern Ocean ?"
"He believes in the Southern Ocean, BURN HIM !!!"


OK, I may have slightly made that last one up. Still... crazy people. Apparently the Southern Ocean has a long, chequered and not terribly interesting history of being recognised by whoever it is that recognises these things. So take great care when talking to the Americans. Not only do they habitually use the word "fanny" in completely the wrong way, they also have really weird ideas about the geography of the planet. Maybe there's a causal relation between these two facts, but I prefer not to speculate.
Posted by Rhysy at Monday, June 13, 2011