The Bard is Back

... in a new film by Roland Emmerich, of all things. Yes, the man who graced the silver screen with the immortal line, "Let's nuke the bastards" has now taken it upon himself to direct a film about one of the greatest playwrights of all time. This can only end well. If Michael Bay is the producer, so much the better. Based on his previous works, I imagine it will go something like this :

Bill (last name presently unknown), struggling playwright, is an alcoholic whoremonger who's drunken shenanigans have estranged him from his only legitimate and very irritating son, who has gone to... umm.... Edinburgh, why not, to take part in a Latin spelling quiz with his highly attractive girlfriend. Casting ? Well, Ian McShane as Shakespeare, can't go far wrong there, let's say Shia LaBeouf as his son with just about anyone other than Megan Fox as his girlfriend. Kristanna Loken, perhaps, for no particular reason. And no, I'm not about to sully this blog with sordid pictures of LaBeouf.

Bill's antics mean he quickly falls foul of the Church and falls in with sinister astrologer John Dee, played by Christopher Walken. Bill quickly sobers up when Dee, in a power-point presentation masterpiece, tells him that the neutrinos from the Sun are mutating into tachyons and mutters something about the end of the world. Then there are lots of special effects shots where London is blasted by tachyons and the hands on Big Ben (Roland probably does not know when this was built) start spinning wildly. Suddenly Bill himself is hit by a bolt of expensive CGI. 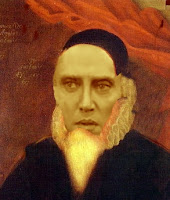 Bill awakens in a frozen landscape. Oh noes ! Our hero has been transported back about 10,000 years when Britain was still covered in ice and sabre-tooth tigers. Now Bill's mission is to trek north across the frozen waste, hoping that somehow he can find his son and find out if he won the spelling quiz or not.

This takes surprisingly little time. Bill impresses the primitive locals with his acting skills and, in a short montage, travels from village to village performing plays in exchange for food and weapons. He makes short work of the sabre-tooth tigers, apparently having a hitherto unknown talent for spear-throwing, about which the locals make some truly awful pun. 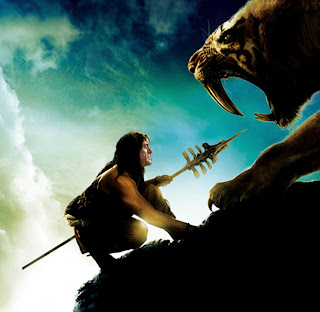 Alas, when Bill reaches the site of Edinburgh things take a shocking turn for the worst. His son is trapped in a cave by a giant fire-breathing reptile, which has a curious habit of changing size in each shot. Things are looking grim for our hero, but he is saved at the last minute when a gigantic spaceship descends, shoots the monster, and then promptly leaves without further incident. 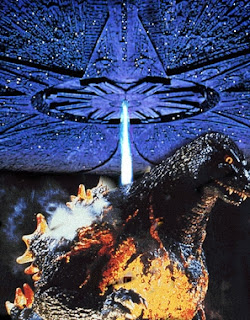 Bill is re-united with this son, who turns out to have discovered a mysterious stone ring inside the cave covered in strange Latin symbols (Roland is probably not aware of the differences between Latin and Egyptian). Fortunately, he has been able to decipher them with the help of his highly attractive girlfriend. The ring turns out to be a portal through time, which Bill uses to return to Elizabethan England. His son, however, decides to remain behind, although no-one is quite sure why.


The movie ends with a shot of the Complete Works of Shake-spear just in case the audience didn't get it, and then everything explodes for no reason.
Posted by Rhysy at Wednesday, June 08, 2011