I must apologise for the extremely bloggy posts of late. I was much happier writing about the similarities between Xena and Caprica 6 and UK politics as a function of Star Wars, but unfortunately the smaller matter of the real world has made its presence felt in a rather unavoidable way, like... umm.... well, like a very unpleasant thing. Pirates of the Caribbean 3, maybe.

I recently posted that I have little idea as to where I am. In accordance with the Uncertainty Principle, this should mean that I know exactly where I'm going, or what I'm doing, or something. Alas reality declares that I know nothing at all about these things. So much for physics. Fear not, dear reader. all will become clear if you have but a small amount of patience to continue reading.

I also recently wrote that Cornell have lost the right to run the telescope from October onwards, for at least the next 5 years. Details of how our new masters will run things are beginning to trickle down, and the news is only slightly more confusing than trying to watch Inception backwards. So although physicists will still exist in 5 years, and the Caribbean also seems quite likely to still be here, exactly how many physicists will be in the Caribbean is anyone's guess.

The source of this confusion is the announcement that salaries will change from their current simple salary model to 50% salary, 50% soft money. Which means, effectively, that only 50% of everyone's salary is guaranteed - the rest people are expected to come up with by themselves, i.e. by applying for grants. In US universities, apparently this isn't so uncommon, although 25% soft money is more normal. In observatories, it's not normal practise.

Such a shocking announcement has not been widely received with much enthusiasm. This much I can say without fear of reprisal, because it should be blatantly obvious to anyone concerned. Although there is not really much concern - I think - as to job security, people are confused about what their job will entail in the future. Will absolutely everyone be expected to apply for grants, or only some ? Will there be enough time left after proposal-writing to get any science done, or will we run out of cake ?

Now of course, I've only been here 3 months, and I've never even heard of the soft-money approach until a few weeks ago. So there's no point me venturing or even forming an opinion as to whether it's a good idea or not. Nor do I care to reveal who thinks what about which particular aspect of The Plan* or whether it seems better or worse than the Battlestar Galactica spin-off. On face value, the transition plan is probably a mite better than the Cylon Plan, which was to kill all the humans.

* In any case, everyone's opinion is still in flux as we await further information.

It hasn't helped matters that since returning from Boston I've had very low water pressure at home (i.e. no shower), owing to a boring problem with the account. With a wonderfully ironic twist, my office in work is flooding, despite being on the 4th floor, as my shiny new air conditioning unit has sprung a leak. Although most of these problems are being remedied, it can't give a very good first impression to my summer student, who arrived to find the place full of angry astronomers and having to share a flooded office with a smelly Briton and no computer.

Sean Bean wouldn't have tolerated this. On the other hand, as Director his policies of regularly flooding the telescope (and using it to control an EMP satellite to cause the global financial crisis) aren't remembered very fondly here. Under his brutal leadership there was barely any astronomy done at all, and so hated is he that his photograph doesn't even appear alongside those of the other Directors.

I think I've just reached my normally unreachable cynicism tolerance limit for the week (and yes it's only Monday), so to avoid lasting brain damage here is a picture of some kittens a bunch of us have adopted. 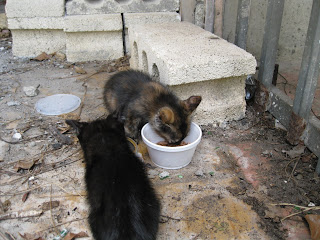 EDIT - Addendum : the angry phase is, apparently, fast-fading. Further meetings revealed little or no new information, but certainly managed to ease tensions. Which is good. I could not attend the latest session, preferring instead to attempt to restore the water supply to my house.
Posted by Rhysy at Monday, June 06, 2011