What the Tourists Don't See (III) : The Platform

At long last I found an excuse to get up to the platform, which means I can bring these little behind-the-scenes excursions to an end. Well, nearly anyway. There may or may not be a trip to the lidar lab in the near future, but I don't know if that will involve pretty pictures or not, and that's what we've all come to see, right ?

Anywho, the platform. A 900 tonne construction suspended 120 metres above the dish, this is the business end of the telescope. James Bond decided to access it via the catwalk, but if he was less pushed for time he could have taken the cable car instead. Not much scope for dramatic chase scenes there though, especially as there's only one car. 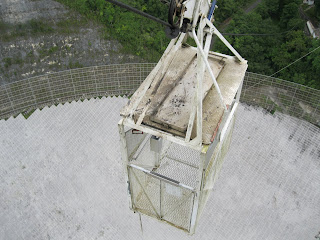 On this occasion however I did take the catwalk, and while no epic battles ensued there was dancing involved. All with be revealed, but not today. Like the cable car, the floor is a metal mesh consisting mainly of holes, and unlike the cable car the side walls are unnervingly flexible. However, this is surely an improvement from an earlier incarnation of the catwalk, which I'm told was a proper Indiana Jones affair with a wooden floor.

Both car and walkway lead to the very top of the platform which, weirdly, is absolutely rock solid. It has to be, otherwise the thing wouldn't work. Running between two support structures is a large metal cable which when struck makes a sound that's pretty near identical to any science fiction laser blast you've ever heard.


I don't remember what the platform in Goldeneye looks like but I think most of it was filmed there so it should by rights be pretty similar, unlike the control room. However, I once again spotted no evil villains bent on global destruction, just some astronomers with a real talent for pulling peculiar expressions the instant a camera is trained on them. It's uncanny. Perhaps I just kept interrupting their evil scheming, but if these guy's are the biggest threat to international security then we can all rest easy. 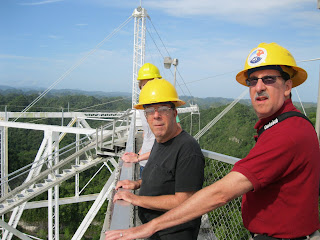 Stairs from the uppermost level lead down into the very centre of the structure. To reach the lower levels you have to climb backwards down some very narrow stairs, which are built around the central axis about which the whole thing rotates. It's exactly like descending into the web of some ferociously over-complicated bio-mechanical spider that's developed a curious interest in radio astronomy. 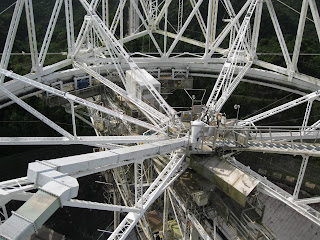 Telephones can be found just about everywhere, including this one which looks like it's older than time itself. It's about one step up from a carrier pigeon, I reckon. Of course, all the electronics are chosen so they don't generate RFI, but surely this is pushing it. 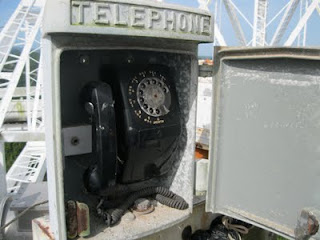 Next comes a trip along the hugely complicated azimuth arm, which supports the instruments. This has the same centre of curvature as the dish and the instruments can move back and forth along it to change their angle of elevation. It's all extremely primitive-looking, covered in cables and maintenance workers for whom galavanting around a hundred metres in the air is just a day job.

The main difference between the platform today and when they filmed the Bond movie is the addition of the giant Gregorian Dome. This is where all the really cool receivers hang out. The line feed - the thing what Sean Bean fell off - is still there, but nowadays all the neat stuff is inside. Two more mirrors focus the signal from the main dish to a point. One of these is 25 metres across and is just too big to photograph properly, so here's a short video clip. Note the resemblance to the Death Star.

And so we come to the receiver room itself, featuring the one and only ALFA instrument that's kept me in employment for the best part of 5 years, a truly scary thought. 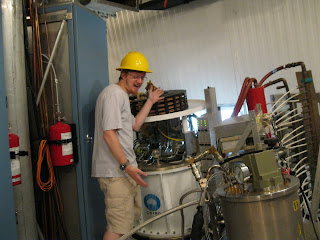 Not many people know that ALFA is controlled by a small fluffy kangaroo without whom the entire telescope would surely collapse into a great heap of rubble. This is because it isn't true, but there is a small fluffy kangaroo securely fastened to the instrument with a cable tie. His name is Hep. Or Hap. Or maybe it was Pap ? Or Pep ? I couldn't tell, on account of the very noisy air conditioning units. 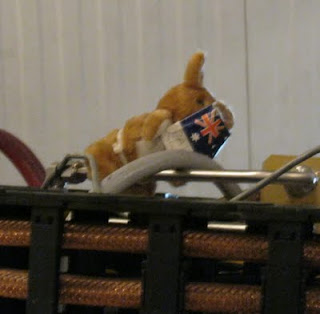 Which I suppose brings me to the end of this final tour, since going down is remarkably similar to going up but in reverse. I'll return next week with a report on the comings and goings of the NRAO Green Bank observatory, which features the world's largest fully steerable dish. Be there or be a rectangular thing !