I've flown through New York several times, but I've never had the chance to actually see the place. Which is a shame because it's always been somewhere I'd quite like to visit. It is, after all, surely one of the most iconic of all American cities. Let's face it, who wouldn't want to visit the inspiration for Grand Theft Auto IV and Gotham City ?

So with the secondary goal of breaking up a 16 hour trip from London to Los Angeles, I managed to wriggle in a day trip to New York. Actually, two half days to be precise - an evening and a morning. I spent the first hour or more in my hotel sorting out a ridiculous Expedia problem whereby I'd booked 3 rooms instead of 1, then went off to explore.

I should first point out that my hotel was in the part of New York that inspired the first region the player encounters in GTA IV, except rather more surly-looking. "Iconic" is not the right word; "worrying" might be better. The only photos I took were from my hotel (while I was tempted to photograph the S&M shop advertising its video booths, I decided this probably wasn't a good idea, on balance). However, credit where credit is due, and the only people I interacted with did nothing more than give me helpful directions. 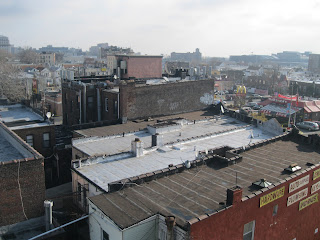 It was dark by the time I fixed the Expedia thing, but that's OK because this was the Big Windy Apple That Never Sleeps*. I couldn't make head nor tail of the online instructions for how to get around on the New York subway, so I instead opted for the more classical approach of talking to other human beings. This really does work remarkably well. I was in Manhattan about 45 minutes after setting off.

* Yes, I am aware that Chicago is the Windy City, not New York, but meh.

I should also say that the New York subway is indeed very good. I saw zero evidence - even when returning at about 11:30pm - of all those tales of how dangerous the subway is at night. Maybe it is in the small hours, I don't know, but when I was there it was very busy and yet a heck of a lot nicer than the London Underground (cleaner, better ventilation, more spacious and with more seats). This being America, however, it did have its surreal moments.

A sleeping man awoke and decided for reasons best known to himself to stand in between the railway cars. Doesn't sound that remarkable except that there are no enclosures between the cars, so he was effectively standing outside with nothing to prevent him from falling onto the track. Thankfully he didn't, and a few minutes later he came back in and went to sleep.

On another section, a couple of kids came by with a radio and proceeded to put on a brief attempt at a break-dancing display. No-one gave them any money, which was probably for the best*. More bizarrely, a small band came through playing some variety of Spanish music with an accordion, a trumpet and a full size double bass. Dedication or madness, either way it was quite impressive.

* I suppose the crowded nature of the London Underground does deserve some credit as it prevents the horrors of street entertainment from descending into the public transportation network.

Since time was limited I headed straight for my goal of the Empire State Building. Bugger the World Trade Center and ground zero and all that - mention New York, and it's Empire State that comes to mind. And also the Statue of Liberty, but I've heard several tales of disappointment on that one, and I'm not sure you can go inside any more. So on I went, quietly humming the Newport parody to myself, marvelling and just how gosh-darn tall the place was, and reflecting on how very similar it is to Liberty and Gotham Cities.

On reaching the Empire State I went immediately inside and found I had been transported into the world of Bioshock. The main lobby has been called a masterpiece of art deco, and rightly so because it is. It's downright gorgeous. I knew absolutely nothing about what to expect, so this came as an unexpected bonus. 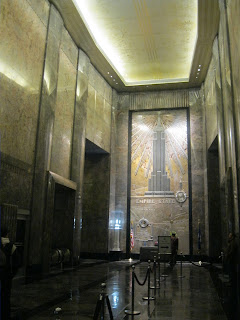 From there it's a fast ride in a lift up to the 80th floor, where there's a small exhibition describing the construction of the building. I get the impression that this is really meant to accommodate crowds on busier days, but a cold night in early January isn't exactly peak time. From there, it's an even shorter ride up to the 86th floor viewing area. 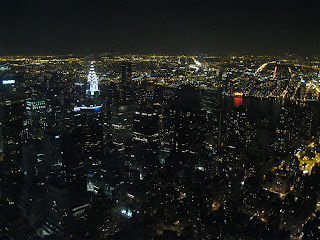 I walked out into the freezing air and instantly knew that going up at night had been a very, very good idea. All right, America, I'll let you have this one. Well done. Very well done indeed. 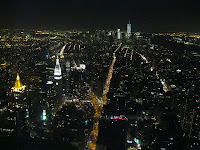 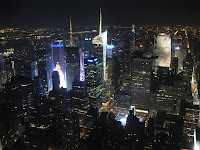 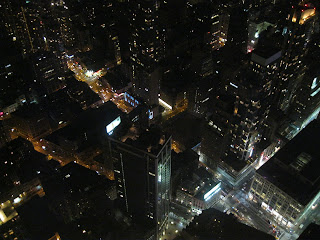 The next day I had only a very little time before my flight, but an hour of wandering around Manhattan is a lot better than no time at all wandering around Manhattan, so that's what I did. Can't say I have a clue what I was looking at. I wandered into Times Square by sheer chance, which is probably for the best because it doesn't seem all that remarkable to me. Just a bunch of big grey buildings (albeit covered in signs), and I certainly don't understand why it's an iconic New Year's Eve destination. 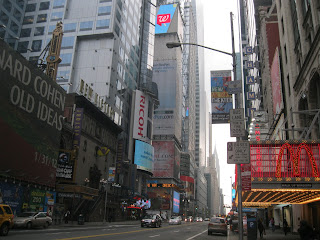 Far more interesting to me was to simply wander around and gaze at the very tall buildings. Damned if I know what any of them are, but they're quite impressive. Though I am confused as to why America likes really grandiose post office buildings - yes, it's an essential public service, very nice, but in the end it boils down to a guy on a horse or a bike or in a van delivering letters. Why does that require a building with so many columns* ?

* In my view, the relative importance of old buildings is a direct function of the number of columns they have. The New York post office has a very high column density** and so must be one of the most important buildings ever constructed. 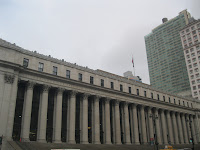 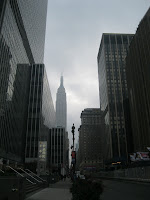 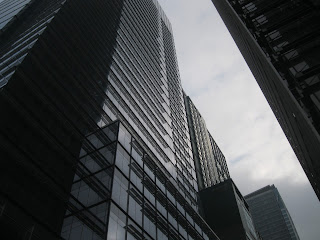 That about wraps up my New York jaunt. From there I was whisked away to Long Beach (part of Los Angeles) for the American Astronomical Society's winter meeting, which I shall describe in the third and final instalment of this travel trilogy.
Posted by Rhysy at Sunday, January 13, 2013