A Tale of Several Cities (IV) : Everything Else in Long Beach

Since I'd been told that Long Beach was a dump, I booked only one day to look around the place. That turned out to be a mistake, not because there's all that much in Long Beach (there isn't) but because there's a space shuttle lurking somewhere in Los Angeles, which I wasn't aware of so didn't get chance to track down. I didn't even see the eponymous beach. Maybe, like Greenland, it was all a cunning ploy to attract people.

Instead, I nervously began the day with a whale-watching trip - nervous not because of some sudden bout of cetaphobia, but because the last whale-watching trip cost $60 and I saw not the merest hint of any marine life whatsoever. While spending four hours hurtling around the sea in a cold, gale-force wind was rather novel the first time, it's not something I'd rush to do again.

Thankfully, this trip not only cost half of the Boston venture but I saw an infinitely larger number of whales. I'm really not sure how many, because Fin whales (despite being the second largest animal on Earth at 88ft long) can swim at about 25 mph so they're difficult to keep track of. Definitely several. Since they're also only visible for a few seconds, this makes them bloody difficult to photograph too. About 200 photographs and all I got was something that any Nessie hunter would balk at. 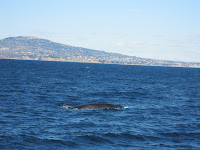 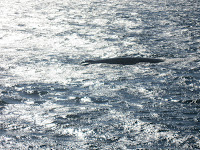 Rather more photogenic were the seabirds (by virtue of sheer numbers) and dolphins. The dolphins were particularly memorable, swimming alongside the boat for several minutes, jumping about and generally being very impressive. The trip ended as the boat crossed a school what must have been dozens, or more probably hundreds, of our marine cousins. 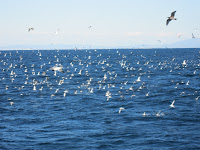 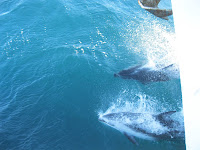 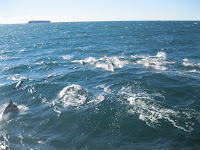 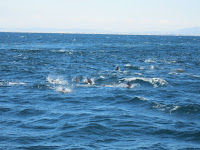 After that I continued with the nautical theme for the day with a visit to a Russian submarine. It's docked next to the Queen Mary, a British ocean liner from the 1930's. Rather wonderfully, as you approach a British ocean liner in an American port the first thing you hear is the Russian national anthem blaring out from the submarine's gift shop. 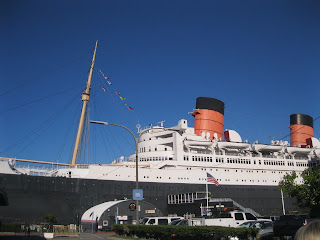 I went to the submarine first because large old boats are fine and all, but in the end are just floating hotels with funnels. There's no explanation (not displayed prominently at any rate) as to how Long Beach came to have a cold-war era Russian sub docked in its harbour, but Wikipedia tells me it was bought off the Australians who bought it from the Russians when it was decommissioned in 1994. So there we are.

Despite the submarine being a Foxtrot-class vessel, the Americans have decided to call it Scorpion. To make things as surreal as possible, the submarine talks to as you in the first person (with a terrible  fake Russian accent), narrating a tour of itself.
"Hello ! I am Scorpion. I can dive over 900ft down. Cannot tell you exactly how far - is secret !" 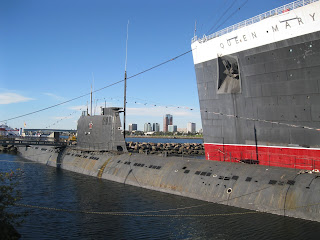 An audio tour is a great idea because the inside of the sub is tiny - quite plausibly too small to have say, visitors and signs at the same time. Having it speak in the first person is great because it's a little bit mental. I can only imagine what it would be like to do this for other tourist attractions.

"'allo, mate, I'm a bloody great castle...." (for some reason I imagine castles would probably speak with a cockney accent)

Anyway, the inside of the submarine is a fascinating place. How 80 people managed to live and fight in these conditions I'll never know, let alone how they remembered what all the valves did (in places these are wall-to-wall, and unlabelled). It only took about half an hour to see, but it was absolutely worth the minuscule $10 entry free. 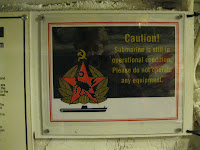 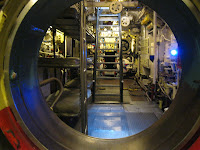 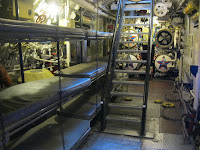 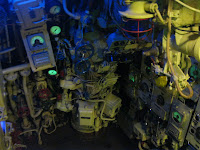 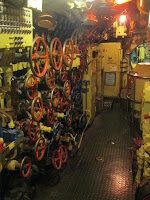 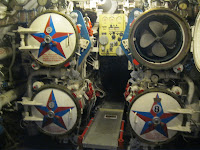 The Queen Mary, as I suspected, was absolutely not worth the $25 entry free - it is after all just a hotel, albeit one from the 1930's that floats and has a gun turret on top. But it was something to do for the rest of the day, so I went in anyway. 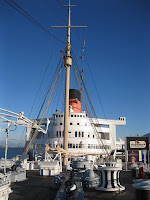 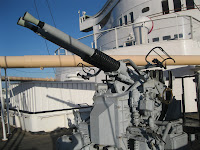 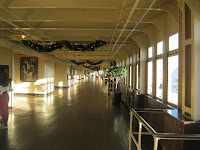 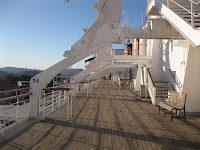 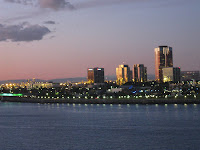 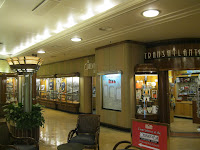 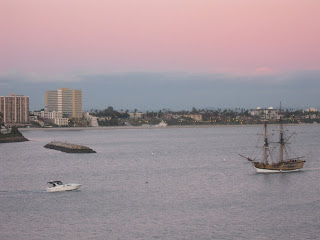 About the only thing that's interesting about the place - apart from the quite stylish art-deco interior design - was that there happened to be a steampunk convention going on at the time. In my naivety, I wasn't aware such things even existed. But they do. Annoyingly, this meant that many of the rooms were closed off for whatever it is that goes on in steampunk conventions.

More weirdly but far less annoying was the presence of booth babes and other miscellaneous creatures wandering about the boat clad in strange, pseduo-Victorian attire. Fascinating. Though I had to prevent myself from declaring in a loud and obnoxious voice :
"You're all wrong, this ship is from a totally different century, don't you know ANYTHING ??"

Reasoning that steampunk enthusiasts would quite likely have some cleverly-concealed mechanical super-legs, I resisted. I was too tired to run away at this point. So I shall finish with a simple question : what the heck is this ? You can see it from the deck of the Queen Mary. My best guess is it's the lair of some fiendish supervillain hell-bent on secretly breeding an army of genetic supermen to take over the world, but you never know, I might be wrong.