Asteroid 1998QE2 comes pretty close to Earth today, about 3.6 million miles. That's the closest, apparently, in about two centuries. It's been in the news quite a bit lately. Partly this is because there will be radar observations that, all going well, will be able to resolve details as small as a few meters across -  the kind you'd normally need a spacecraft for. The other reason it's famous is because of its designation of QE2. At around 1.7 miles across, this hefty space rock is about 9 times wider than its floating namesake. Which gives us Silly Graphic no. 1 : 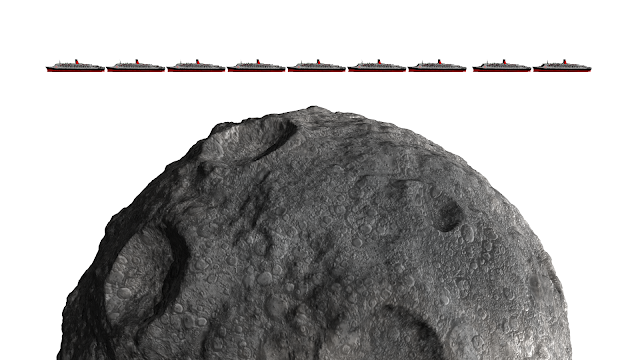 This isn't terribly interesting, but perhaps it's an easier way to grasp the size of the thing. Another, healthier way would be to go for a brisk 30 minute walk, but finish reading first because I'm not going to wait until you get back.

This silly comparison has been made all across the internet, probably because it's super easy to copy and paste pictures of some random asteroid and the QE2 together. That's not what I did though. I used an existing 3D asteroid model from another project and quickly made a very crude model of the QE2.

Asteroids come in many shapes and sizes and we won't know exactly what shape this one is until we get the radar images (which if you click the link, you'll find are coming through right now). Assuming it's spherical won't be all that wrong. In any cases, the diameter of the thing doesn't really tell you all that much about its size. For instance, the diameter of Earth is about 8,000 miles, but a London to New York flight of 3,500 miles is hardly the same as going halfway round the world. 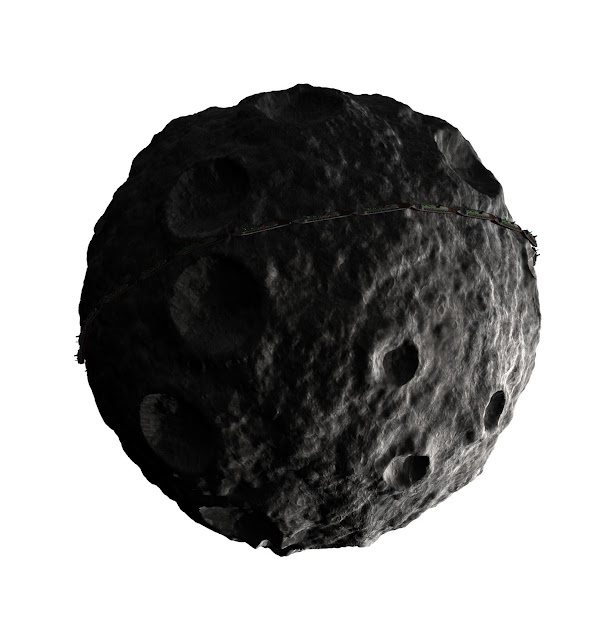 But neither diameter nor circumference tell you all that much about how much stuff the thing is made of. Assuming a typical asteroid density, the thing probably has a mass of around 14 billion tonnes. That's about as much mass as 300,000 QE2s. And that gives us the particularly absurd Silly Graphic no. 3.

Or to put it another way, if we stacked them bow to stern they would stretch about 55,000 miles. That's twice around the world. Or a quarter of the way to the Moon. Whatever. The point is that's three hundred thousand ocean liners of mass. They're all hurtling past Earth (in asteroid form) at about 24,000 mph. For those who enjoy worrying about such things, the Chelyabinsk meteor - which injured 1,500 people - massed about one fifth of just one QE2.

On that note, I'll leave you with a summary of the main points in video form, because videos are shiny.

STOP PRESS ! 1998QE2 has its very own adorable little moon. At just 600m in diameter, it's only a few times larger than the International Space Station. Which leads inexorably to Silly Graphic no. 4.

We are now living in an age - only 36 years after Star Wars - where it is perfectly legitimate to use the phrase, "That's no moon... it's a space station." The International Space Station is already larger than some small moons ! Asteroid moons, at any rate (some prefer to call them "binary asteroids", but when you get right down it they're small rocks going around larger ones), but that's good enough for me.

Diligent viewers will notice an altogether different comparison at the bottom of the image. A certain "Major Suave" commented on Universe Today that QE2 is, of course, also a monarch. Well, Major, I'm always happy to oblige a member of the military. Queen Elizabeth the Second, by the Grace of God Queen of This Realm and of Her Other Realms and Territories, Head of the Commonwealth, Defender of the Faith, is 1.63m tall. That means that if we could clone her and then somehow send those clones to the asteroid, we'd need about 5,200 Queens to encircle 1998QE2.

The mass of the Queen is harder to come by. Her official response appears to be something like this :


However, whatever else you may think about Britain's much-revered head of state, she's definitely not fat. Assuming she has a typical body mass index for a person of 1.63m height, she probably weighs around 55kg. Terrifyingly, if we could convert the entire mass of 1998QE2 into Queens, that would give us a devastating swarm of 270 billion monarchs. And no, I'm not going to render that.
Posted by Rhysy at Friday, May 31, 2013