As I've previously reported, people flock in droves to the Charles Bridge to the point where it becomes invisible. This is undoubtedly the peak of the population density in Prague, but on the surrounding streets the flow of tourists is still torrential. Yet, walk for merely a minute - or less - orthogonal to this living human filament and the streets are practically empty.

It isn't that the towers and spires of the city are mere fronts, disguising some kind of foul city-wide cesspit. In fact the rest of central Prague is no less beautiful than the army-ant tourist route, though it is, perhaps, less iconic. Even this isn't true of Vysehrad, Prague's second castle. It's accessible by a short, very easy (i.e. flat) walk from a metro station, is about a thousand years old and has sweeping panoramic views of the city. And yet on a sunny Saturday afternoon there were no more than a handful of visitors in the whole, extensive site. 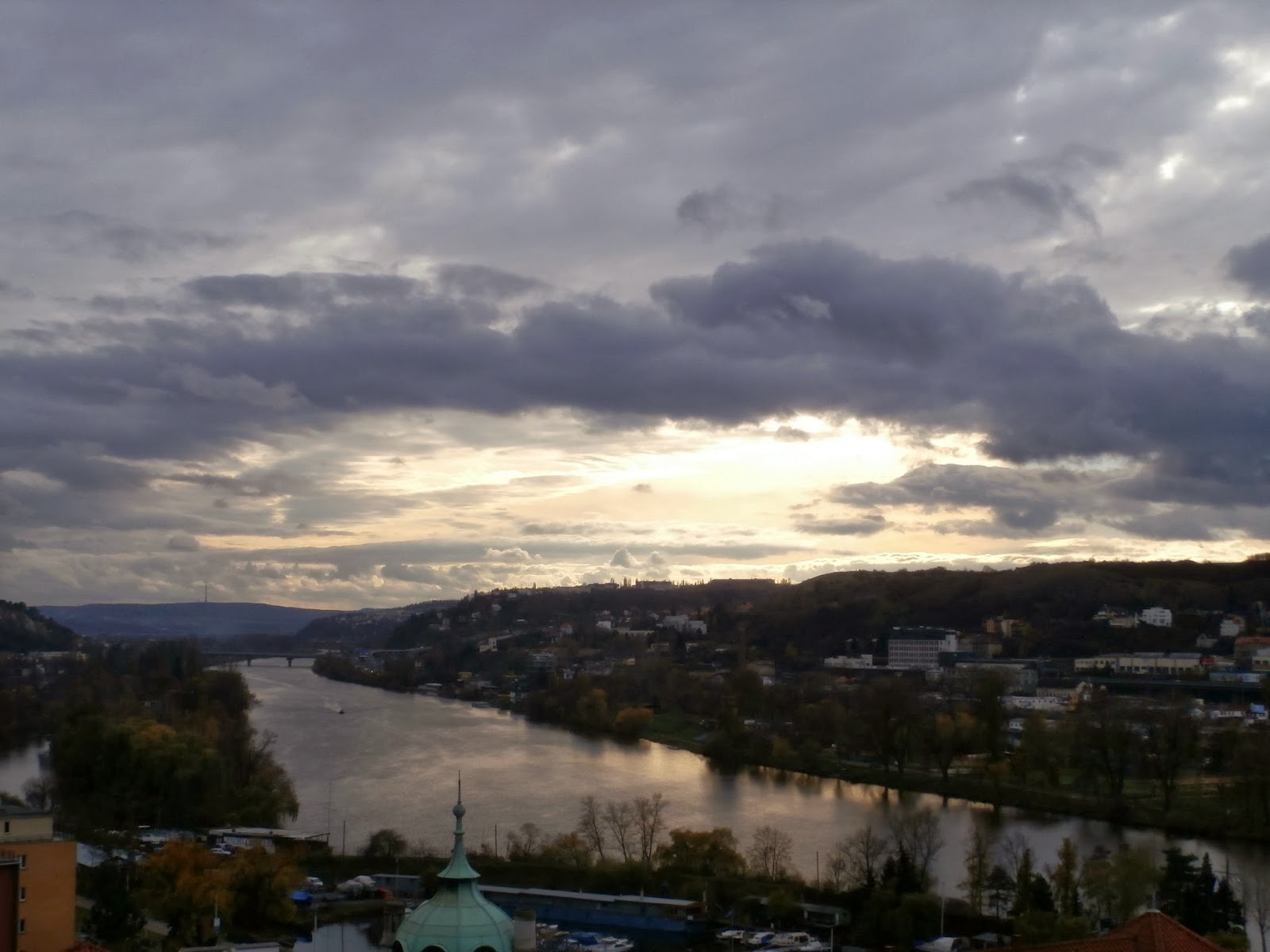 What's wrong with people ? The site is only two metro stops from the city center - so it's basically still in the city center. A city with a population of 1.3 million, yet it almost feels like somewhere rural. This is wonderful. In fact, I'm wary of promoting it, in case it too is swallowed whole by the voracious human wyrm.

It's also cheaper than Prague Castle (which itself it not very expensive). Entering the cathedral is about £1 (St Vitus is free to simply enter but costs about £5 to walk around - still, admittedly, a bargain) while the spacious grounds are entirely free. As is the cemetery, where the great and good of Czech society are buried. As I understand it, the nearest British equivalent would be Westminster Abbey. 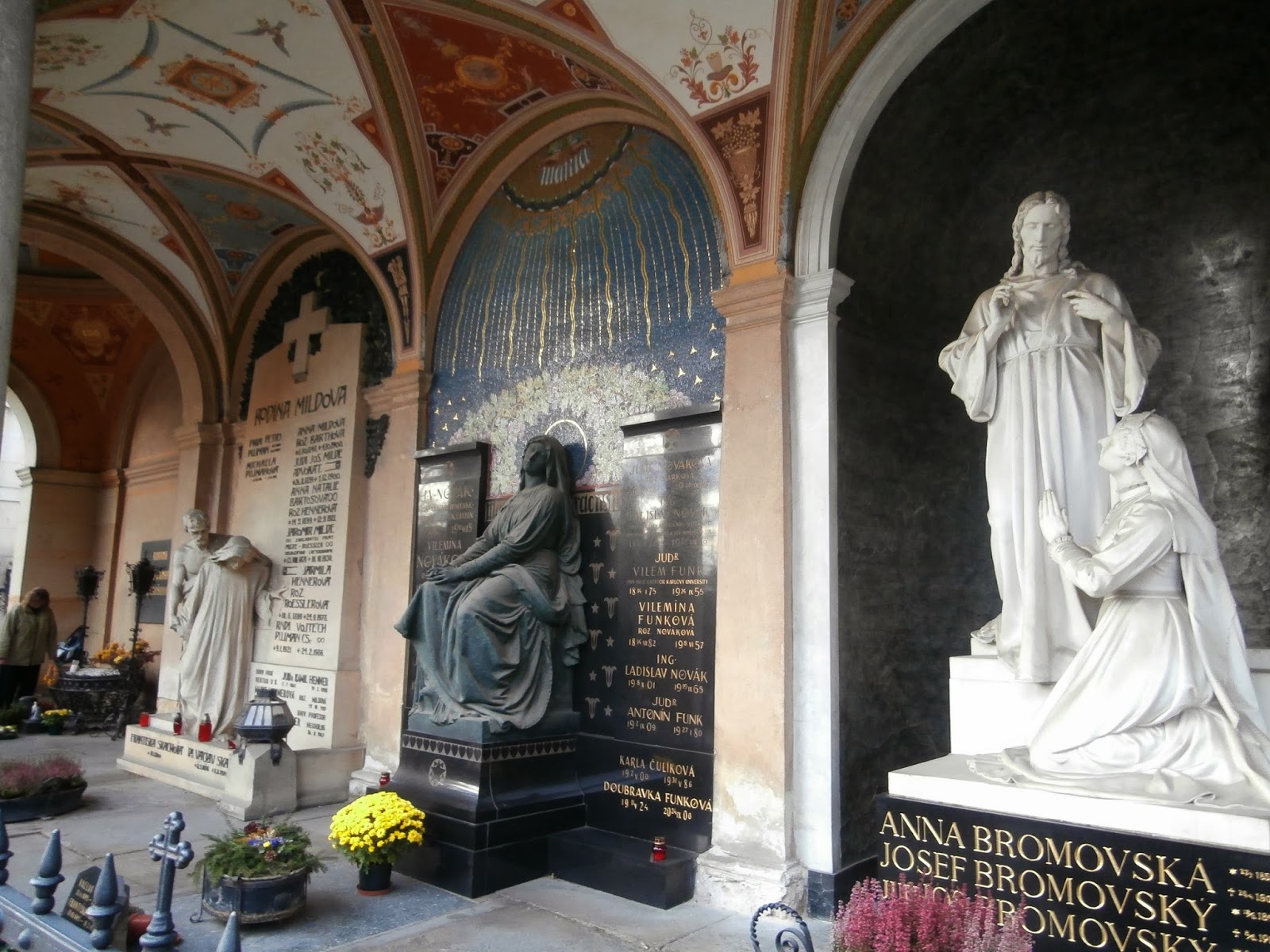 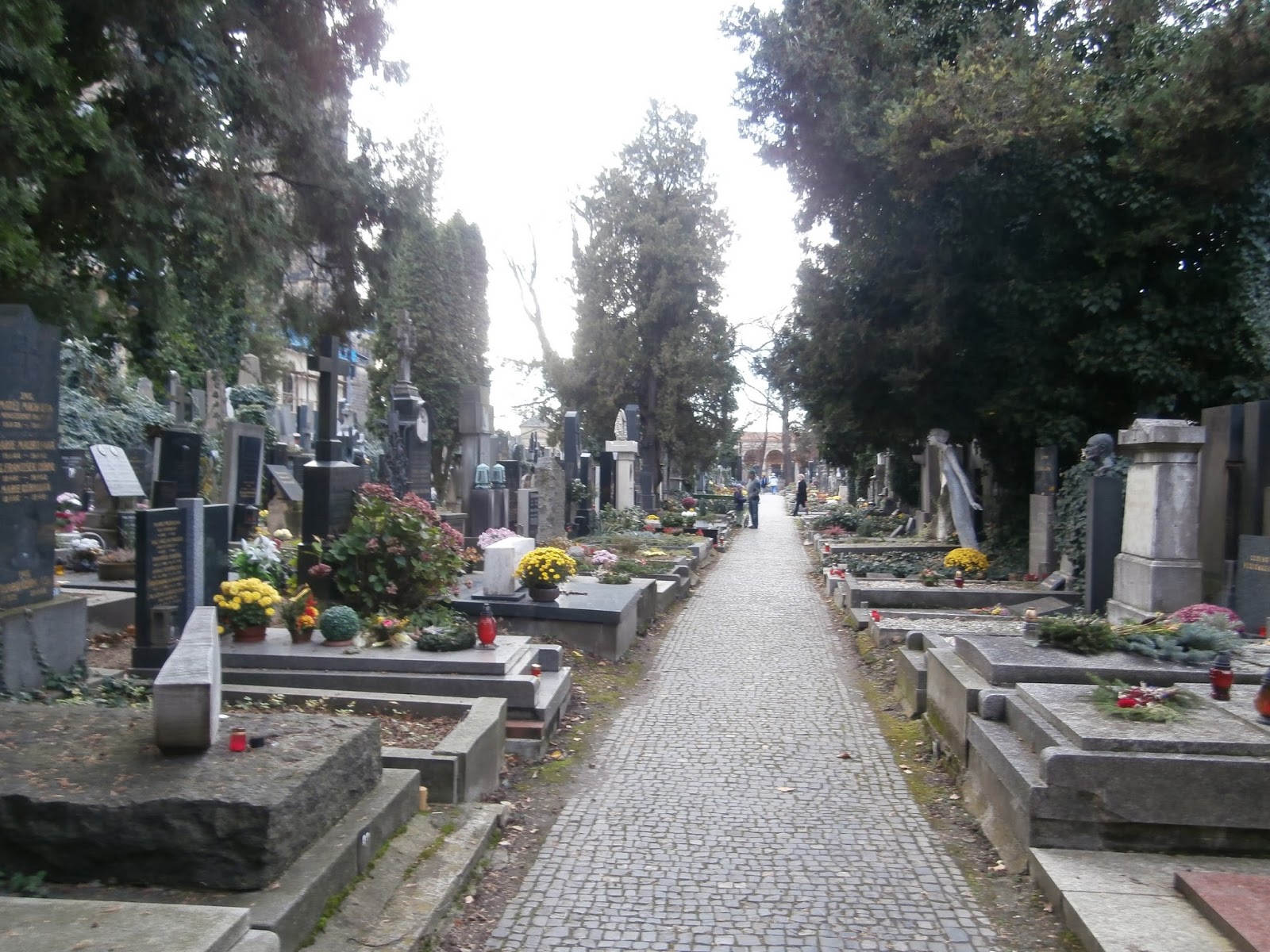 It's a fascinating place to explore, though the only name I recognized was Dvorak. Even so, I would have spent longer had I not already been around the site for about 3 or 4 hours. I kept getting distracted by just how lovely the place is. 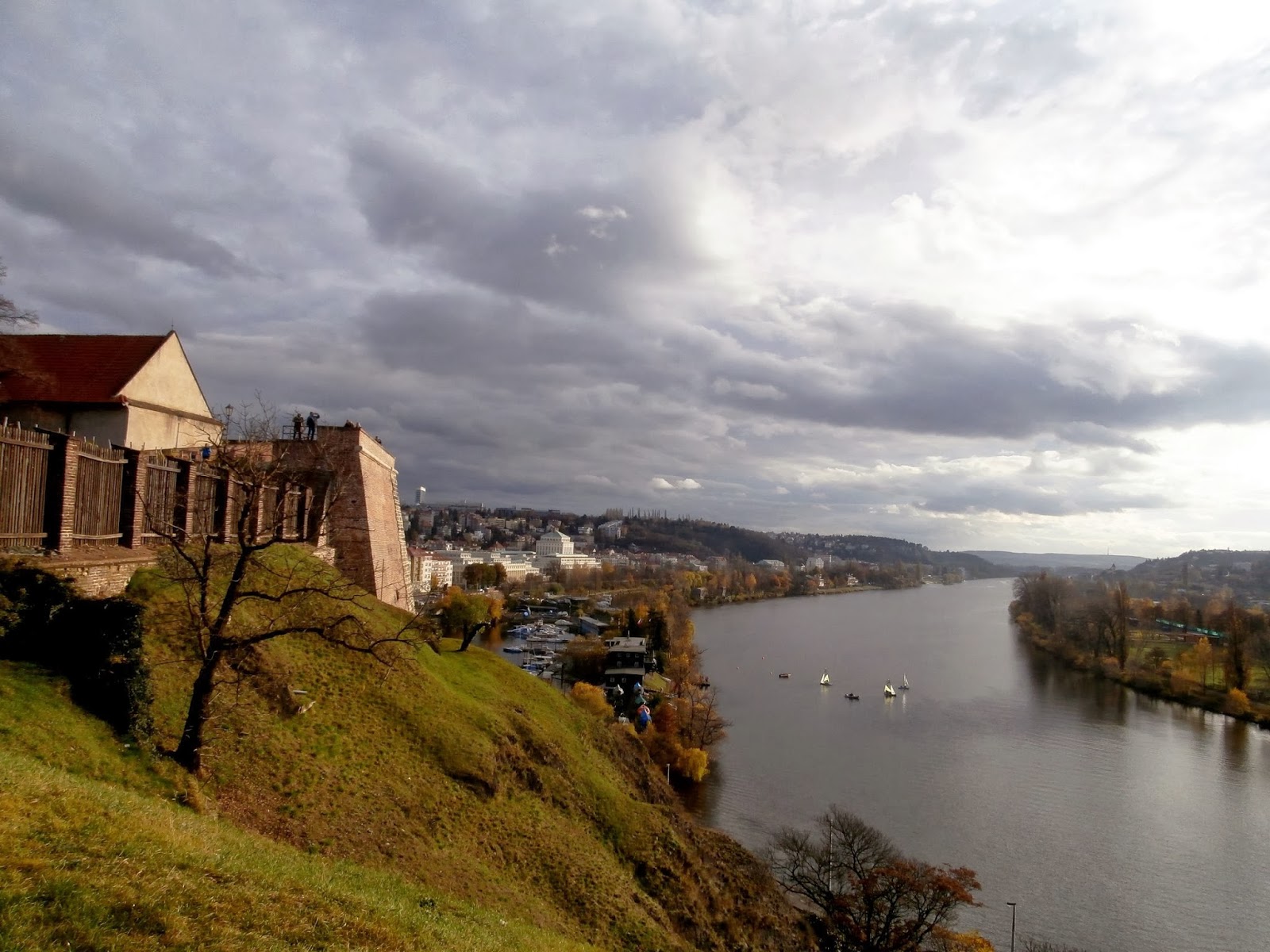 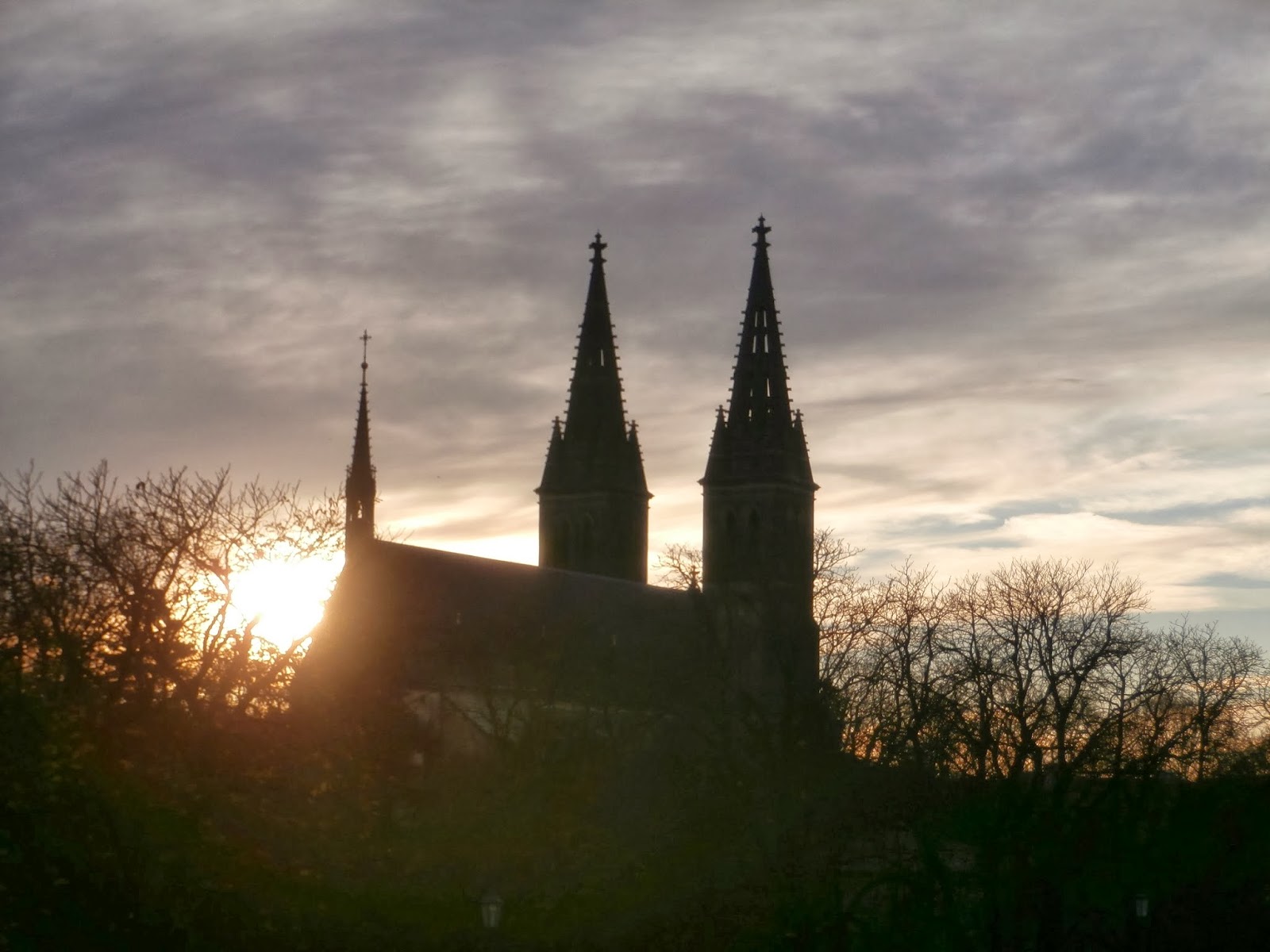 If you want landscapes, go to Switzerland. For skyscrapers go to America, and for castles go to Wales. But for churches, go to Prague. So far I'm convinced that the city could no more allow an ugly church than a Greenpeace activist would eat a  whale burger with a side order of dolphin fins. Vysehrad is not as magnificent as St Vitus or as ornate as Our Lady Before Tyn. But it is cheaper than St Vitus and far less crowded. It's not free, unlike Tyn, but they do let you take photos (unlike Tyn). The interior is certainly remarkable, and well worth seeing, being entirely covered in paintings. 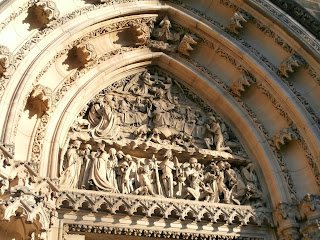 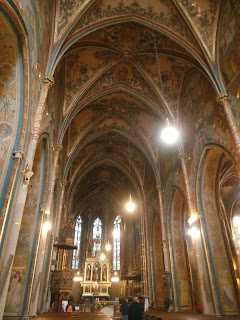 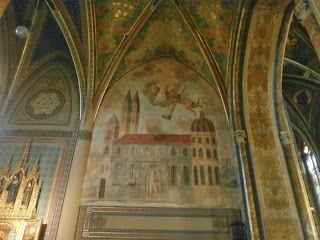 One could be forgiven for walking through Prague Castle and not realising it's a castle. Not so at Vysehrad, whose massive ramparts are... err, well, they're very large. I think I've run out of metaphors for the day. Still, they provide a very nice walk through the extensive park grounds. I had lunch in what was an unremarkable café until I realised that the walls were four feet thick. Well, I suppose it was important to protect the tourists back in medieval times*.
* Another, much less likely possibility is that it wasn't originally built as a café.


Vysehrad, though almost deserted, does not lack for places to eat. I can only assume the place is busier in the summer. It also has one or two exhibitions, though I did not pay them a visit. Having spent several hours wandering around, and with the need for laundry becoming ever more pressing, it was time to return. For, as the poet Homer would say :

"But despite my grief, let me do laundry, since there is nothing more shameful than the wretched washing machine that demands a man’s attention however deep his distress, or heavy his heart, and my heart is heavy now, yet my laundry goes on insisting I wash it at 40 degrees with a 1200rpm spin cycle, making me forget what I suffered, demanding the washing machine its fill. "