The Best Space Rock Ever

Sometimes life gives you lemons... and sometimes those lemons are fabulous. Today's lemon is the asteroid 1998QE2, the asteroid that just keeps on giving. For starters, it shares the name of the QE2 ocean liner, and happens to be of comparable size. As, of course, I already demonstrated, but here's a reminder.
The asteroid shot to fame about a year back partly due to its name but mostly because it made a very close pass of Earth. That gave planetary researchers a chance to zap it with powerful radar beams, and lo! a moon was discovered. An adorable little moon, which, perfectly, is not a lot bigger than a real-life space station.

All this was known almost as soon as the data came in, when the asteroid shot past Earth at a distance of less than 4 million miles back in May 2013. After that, everyone quickly forgot about it, because it's no more a threat to civilization than the other QE2, or indeed, the other other QE2, and most people don't care about space rocks unless they're threatening to land on us.

... that is, except for those plucky rock-zappers who now found themselves with a bunch of data to analyse. Through the magic of science and time travel*, the fruits of their labours can now be revealed. Probably the most awesome thing about radar observations (if you're trying to make graphics out of them) is that they can determine the true 3D shapes of the things they're measuring. Even better, I don't have to do that, because I'm a galaxy hunter, not a rock zapper.

*Well, we've travelled a year into the future. Compared to a year ago, I mean.

These are the shape models from the Arecibo radar observations (not to scale - QE2 is on the left and the moonlet is on the right), generously provided by Sondy (as, in fact, were most of the numbers in the rest of the post, which means I have someone to blame if anything's wrong). By sheer fluke, it turns out that 1998QE2 is pretty spherical, so my earlier renderings weren't complete nonsense.

What this lets us (and by us I mean Sondy) determine is a more accurate measure of the mass and density of 1998QE2 and its moon... which I'm going to call Prince Charles, for obvious reasons. Since one theory of binary asteroid formation involves the larger one spinning so fast it splits in two, thinking of QE2 as the parent may not be entirely inaccurate.

First, here are the asteroids to scale and at their correct separation. The texture is, of course, entirely fictional : 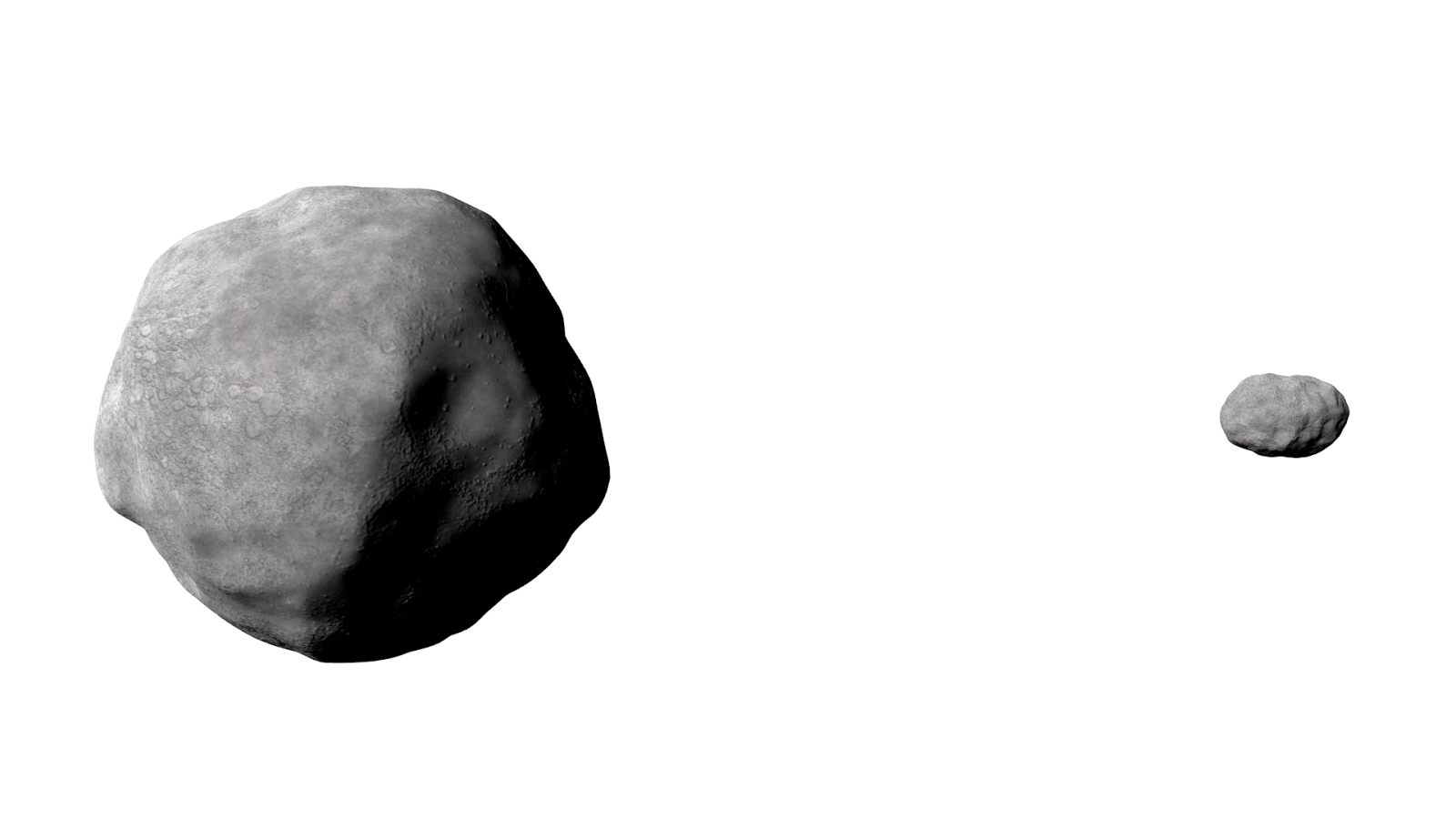 The new measurements put QE2 at 3.2 km across, while Prince Charles is 800m in diameter - slightly larger than the initial estimates, but they're both still pretty puny. They're separated by 6.4 km, center to center - or perhaps more meaningfully, Charlie would be just 4.4 km (less than 3 miles) above the surface of QE2. It would span a whopping 10 degrees in the sky - this is massive. The Moon spans just 0.5 degrees of the sky from the surface of the Earth.

The real fun, though, comes from the mass. Previously I stated that the mass of the QE2 was equivalent to about 300,000 cruise ships. That has to be lowered a bit to about 225,000 ships. This matters. For starters, the escape velocity of QE2 is about 1 m/s. Which means you could jump off it - easily. Thanks to the moon, this means you could jump from one world to another. Anyone growing up in this crazy environment would learn orbital mechanics at the same time they were learning to walk, though walking would be nearly impossible. Surface gravity would be less than 0.003% of Earth - drop a ball on 1998QE2 and it would take about 90 seconds to hit the floor.

But the most fun implication from the mass is the density - 0.7 kg per cubic meter. That's less than water. And that means this asteroid, with the same name as a large famous ship, would float. I love this rock.

Except that it wouldn't - not like that. That's the naive, dramatic version. Since the density of the asteroid is only about 70% that of water, 70% of its volume would be underwater. Instead of a mile-high cliff sticking out of the water, what would actually be visible would be more like a small, low island.

Sadly though, even this isn't accurate. The asteroid is made of rock, not ice, so to have such a low density it's probably a rubble pile - a loose collection of rocks and gravel, with lots of empty spaces. Instead of bobbing about in the ocean, it would collapse in a huge unsightly heap,a bit like unleashing a truly ginagorous ("titanic", you might say) bath bomb. Enclosing it in a giant plastic bag might work, but it would still collapse and at best, what you'd get would look like a monstrous jellyfish.

So here we have a world with the same name as a famous ship, of such low density that it would float (though only for a little while before disintegrating), and which is so small you could jump off of it and land on its moon - which could legitimately be confused with a space station. If there's a more awesome asteroid, I'd very much like to hear about it.
Posted by Rhysy at Wednesday, April 02, 2014