If the last post was about scientists behaving inappropriately, then this one is surely the exact opposite. Here's what scientists are supposed to look like. Why every scientist isn't given a lab coat on graduating is something I'll never understand.

The list of unexpected things I've done in the name of science is getting fairly long at this stage. There was that terrible, terrible dance video, the awful epic poetry, the rather nice epic doodles, the time an imaginary monkey helped me to measure hydrogen, my appearance in the Scottish Sun (while still in Puerto Rico) because my student discovered a galaxy that looks like the Loch Ness Monster, and of course writing The Story of Princess Olivia and the Magical Moose Whose Name No-one Could Quite Remember. Even so, I still think I'm struggling to outdo photographing a potato for NASA... though if things pan out, that one will soon get some satisfying closure. I can say no more.

The Czechs, it must be said, are a very reserved bunch. I doubt anyone would dispute that - when giving talks, it's tough to imagine a greater contrast than between Czech and Anglo-American audiences. But it would be a terrible, terrible mistake to confuse a certain natural caution and generally measured approach with a lack of enthusiasm, sense of humour and fun. Oh no. Far from it.

Our head of department turned 65 recently. A lunchtime discussion briefly considered the notion of a present, before someone suggested we put on some kind of performance.
"What, you mean like, 'Star formation through the medium of interpretative dance ?' ", said I.
"Yes." was the immediate and quite deadpan response.

And that's exactly what we did.

In a few hours we had the basic routine worked out. We'd act out the theory of the formation of a globular cluster. There'd be dry ice (for the interstellar medium), hairdryers and confetti (for the stellar winds), ribbons (because stars form in filaments), flashlights (because, you know, stars shine), costumes (different coloured mantles for different spectral types, hats with equations for black holes and Bonner-Ebert spheres), balloons filled with foil (because stars produce metals) that we'd burst to generate supernovae... in short, it would be a no-singing, all-dancing affair. I was immediately appointed narrator due to my suave and sophisticated British accent, a.k.a. being the token native English speaker.

Despite the truly frightening end result, the Arecibo Anthem genuinely did involve a lot of practise. It had zero props, it's just that none of us were any good at singing or dancing. In contrast, Star Formation Wars had dozens of props, only two practise sessions, and the dry ice turned up not six hours before (like it was supposed to), but 30 minutes. And yet it basically works.


OK, sometimes people missed their cues. My narration has a charismatic delivery that only Ed Milliband could envy. The music track decided to stop working FOR NO REASON !!! about 2 minutes in, and half the time I was too busy watching the participants to bother changing slides (I was also using a camera flash when the supernovae went off - there was a surprising amount of multi-tasking here). Did any of that matter ? Nope.

You probably can't see just how much material was injected into the interstellar medium by the stars and supernovae, but it was a lot. Bits of foil are still appearing randomly all over the institute. Like the drawing of "Dr Rhysy Baby" that's still in my old Cardiff office, I suspect bits of foil will still be turning up long after I've left. I hope so.


Anyway, to return to the picture at the start, the reason we're all dressed like that is because we're all going down a silver mine. The admission fee for Star Formation Wars didn't generate the massive revenue we were hoping for, so the search for funding has become desperate - so desperate that the postdocs have given up applying for grants and are now sent deep into the bowels of the Earth to hack small pieces of silver out of the dirt. Well... not quite. In fact, that's hardly true at all. Actually it's a lie.

Apparently, medieval miners used to wear white cloth because it was cheap. There are medieval depictions of them dressed up like that, although methinks the artist to have been a trifle naive if they really thought those clothes stayed white enough to pass the prestigious Daz Doorstep Challenge for very long. Still, the miners weren't likely to have drawn naked ladies all over their jackets. Presumably.

The pretty town of Kutna Hora is about an hour and a half away from Prague by bus. Back in medieval days it grew fat off the proceeds of its famed silver mines - literally, it was history's first obesity crisis. OK, that's another lie, but it did get stinkin' rich from the silver mines - the deepest of which was called the Donkey Mine and was over 600 metres deep. Amazingly that's not a lie, apparently it was called "Donkey" because that was the owner's name, for some reason. I blame a rather sordid personal history and some very lonely nights.

The tour of the mines is very good, even though you can now only go down to 35 metres. The lower levels are flooded and anyway the rocks contain arsenic (as our guide explained with the black humour typical of the Czechs : "It was good to be a miner's wife. You'd get rich and probably have at least three different husbands"). The mines are narrow, so fun to explore but don't photograph well. All this silver helped pay for two fine cathedrals, and they're more photogenic. 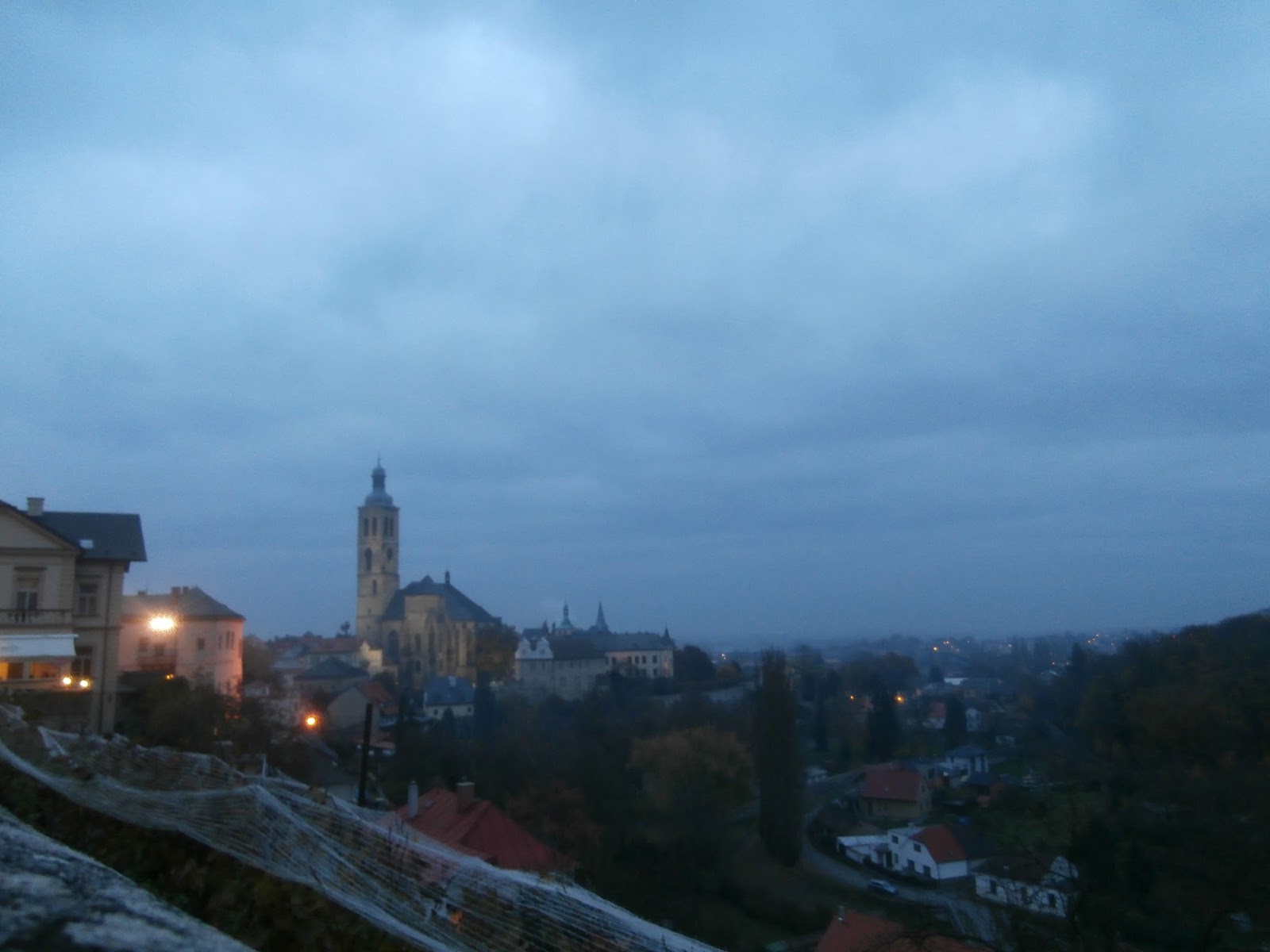 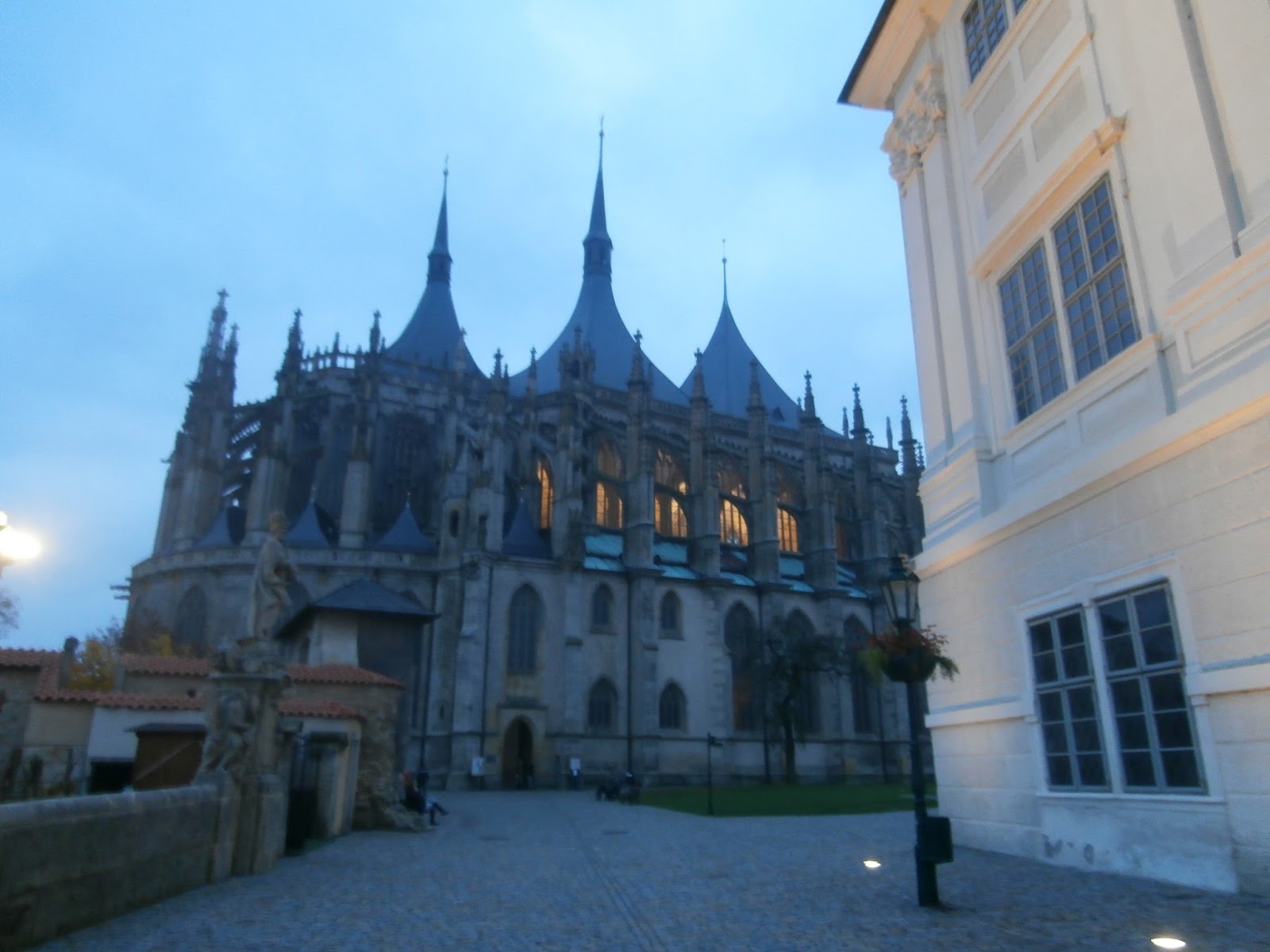 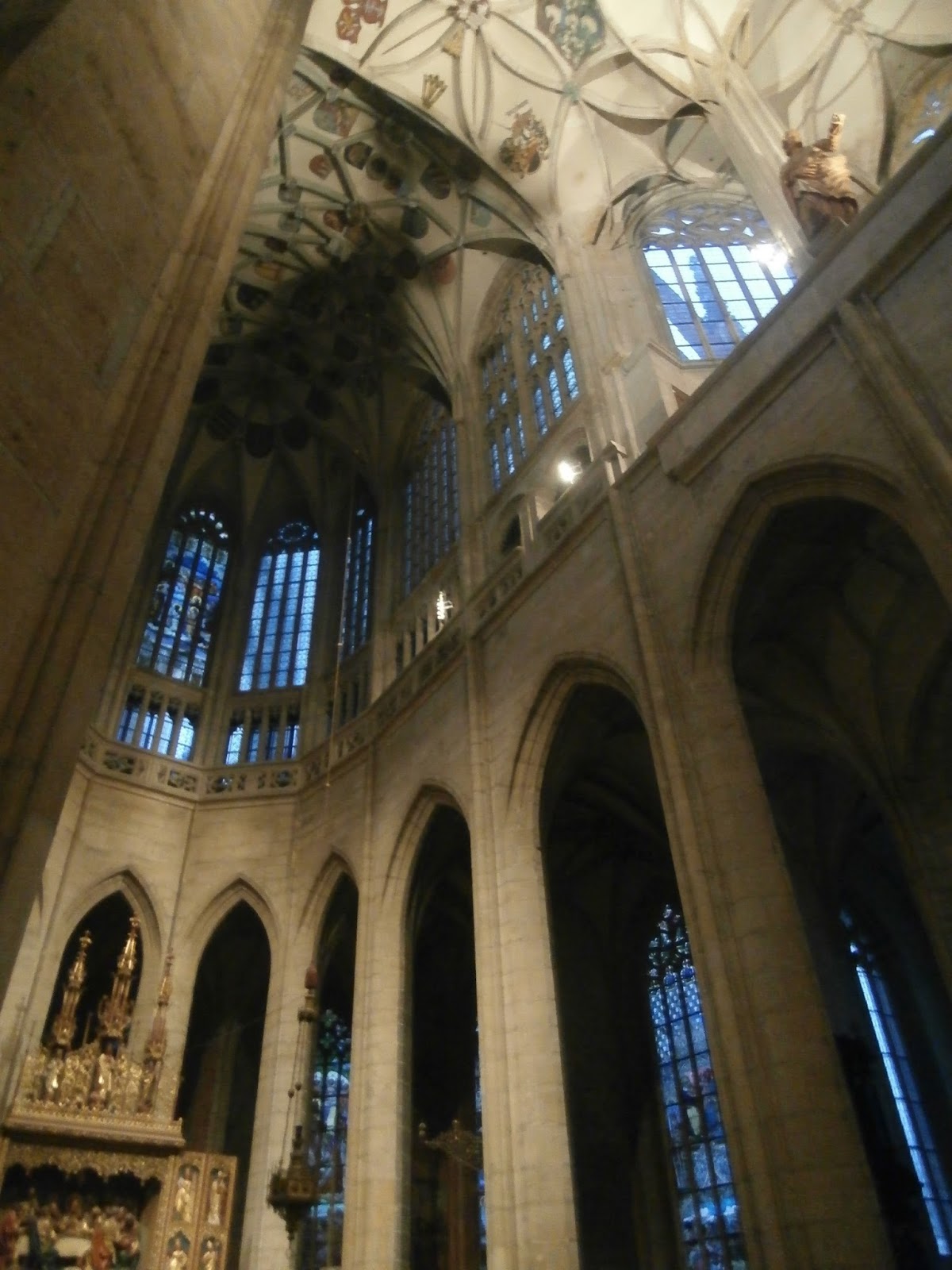 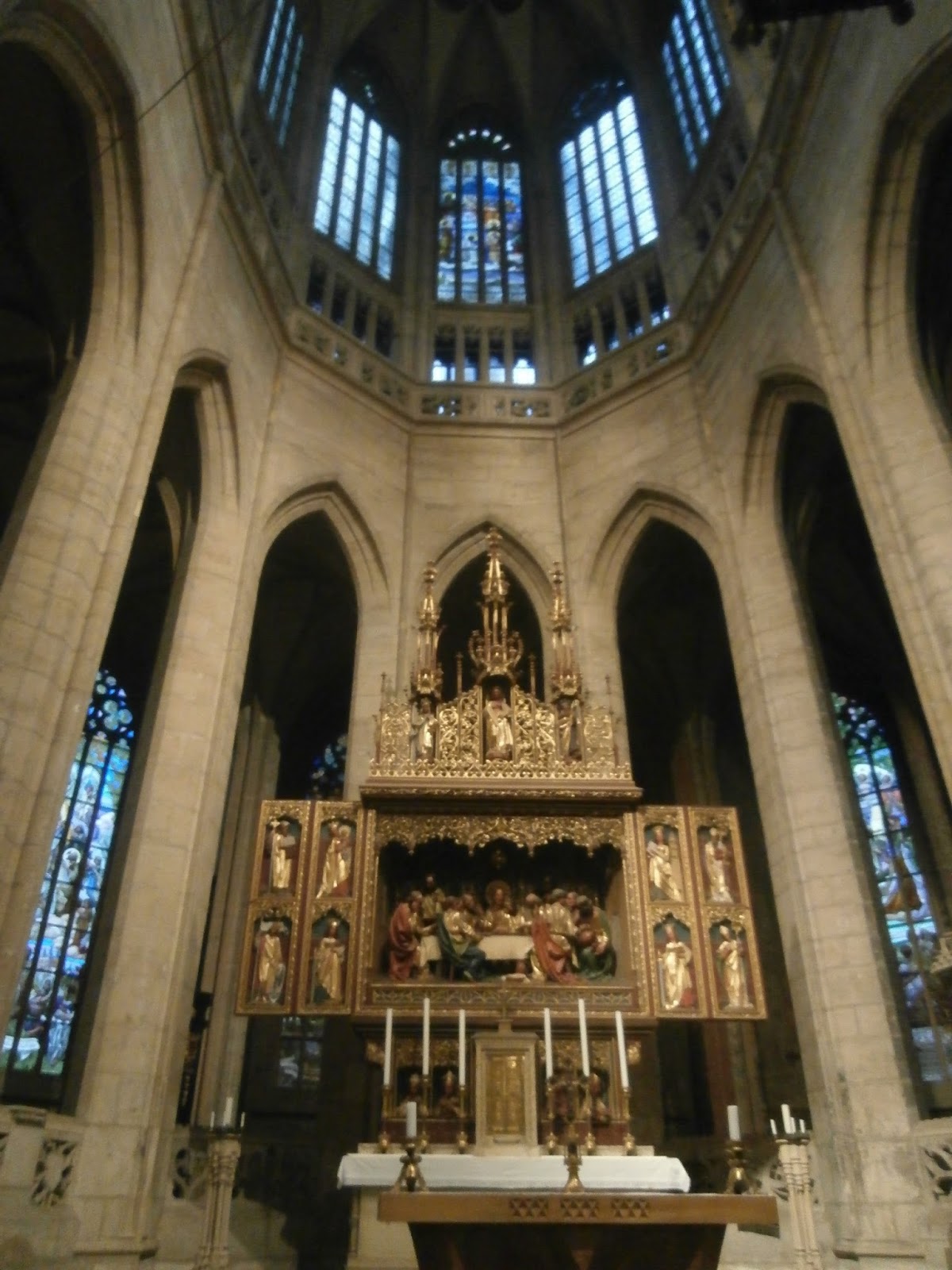 St Barbara's, above, is very much a typical cathedral. I always like visiting them, but they're all basically the same. The other one, with the more grandiose name of the Church of the Assumption of Our Lady and Saint John the Baptist (described as a fine example of "architechtonic heritage" in a translated sign), is in some ways more interesting. The interior having been gutted at some point in its long history, it's been restored... after a fashion. It sort of looks like the mid-stage of a "pimp my church" reality show; a cathedral without any of the trimmings - which is about 90% of what a cathedral needs in order to be... well, a cathedral. 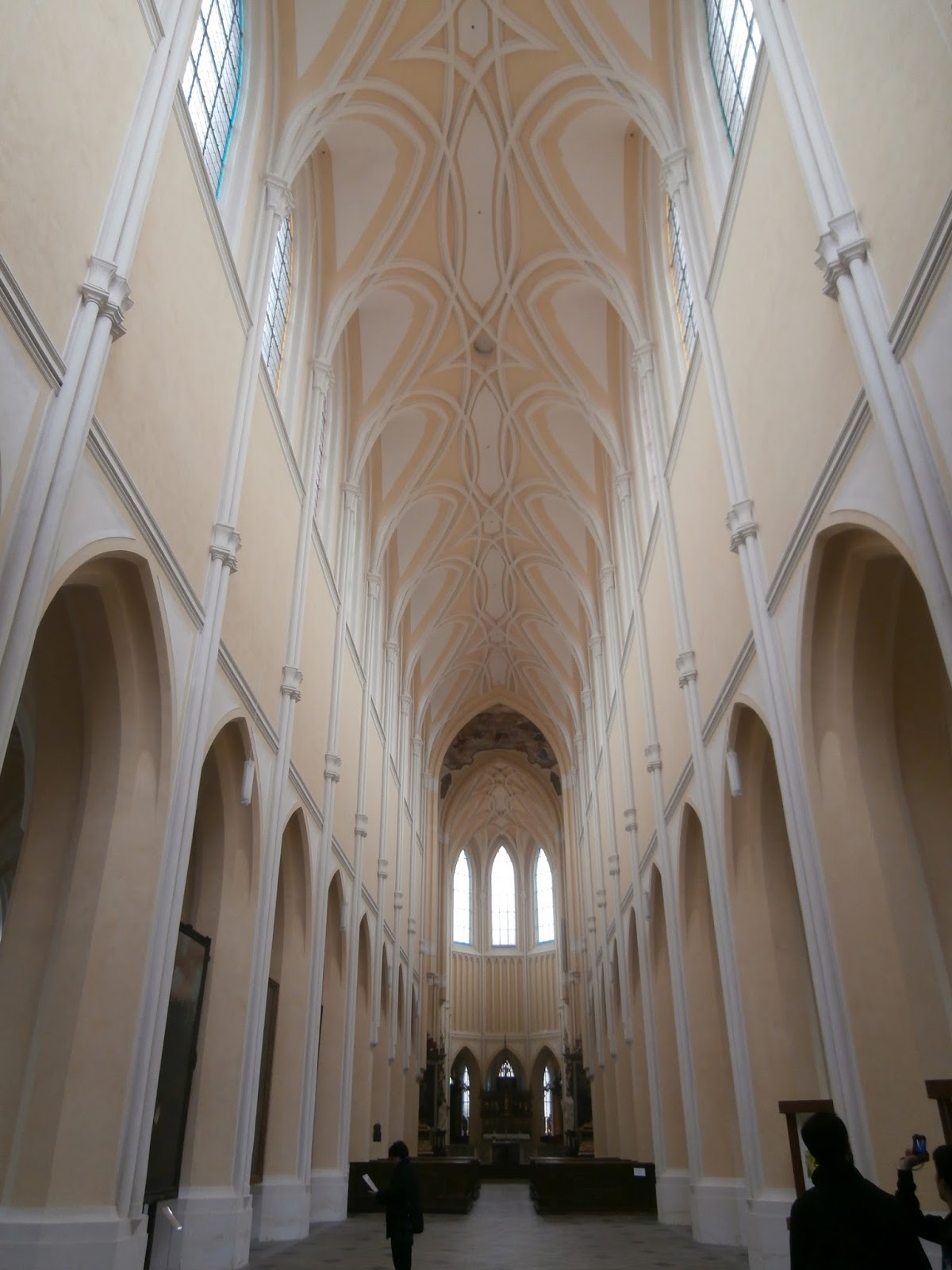 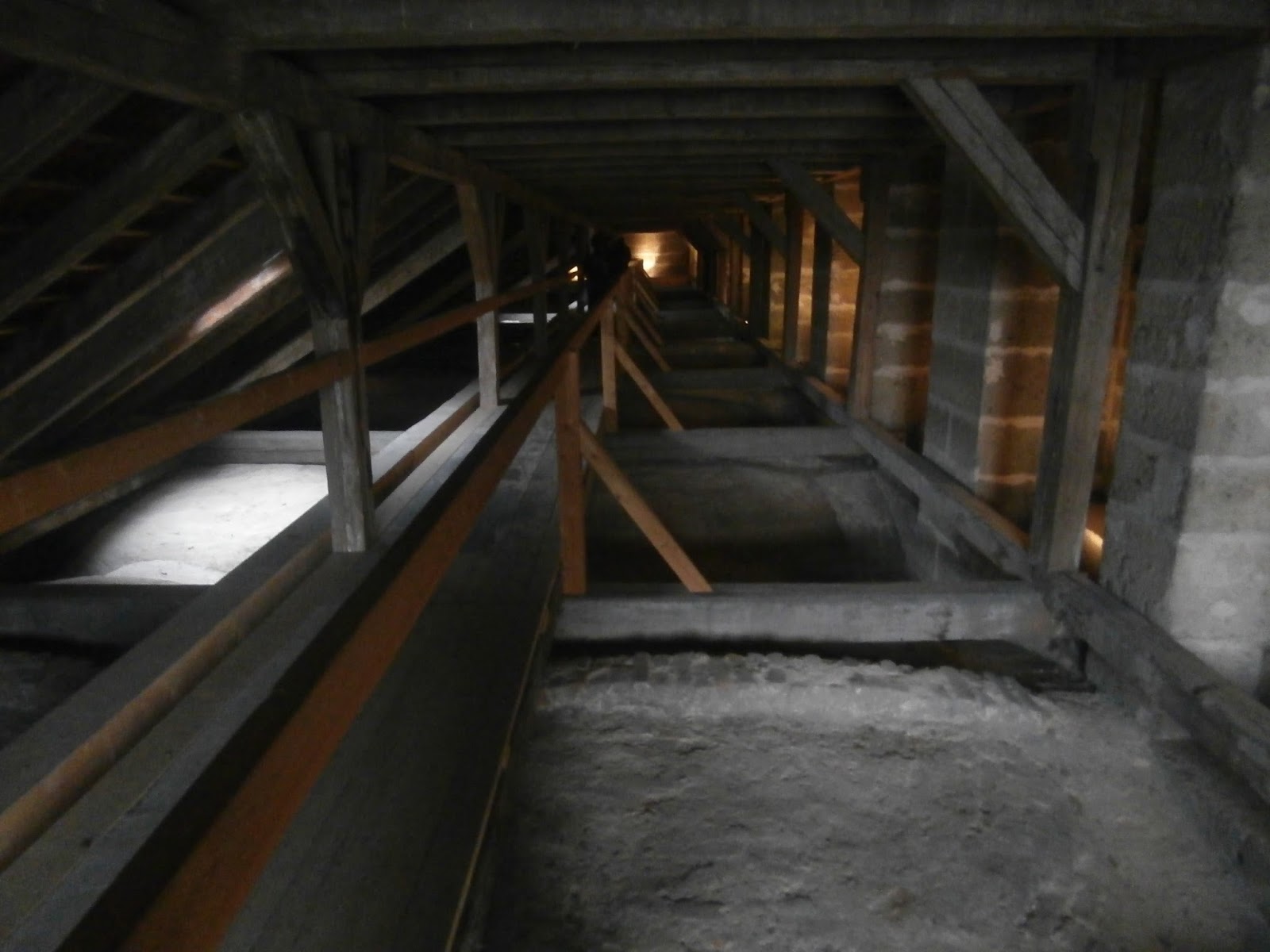 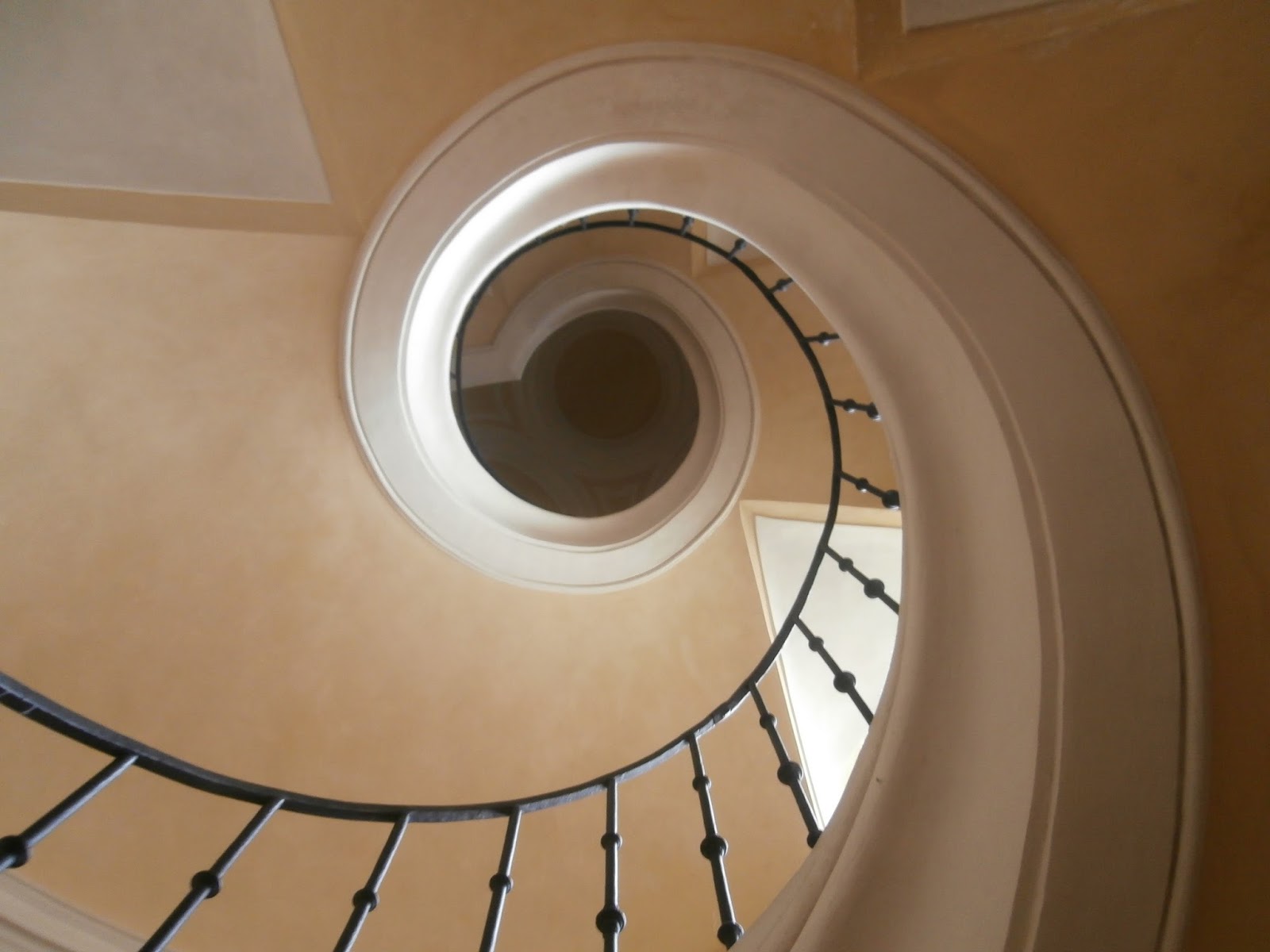 The most interesting bit was going up in the rafters, because they hardly ever let you do that. Suddenly the whole interior made a lot more sense. I have no idea what I was expecting, but somehow it wasn't that.

Anyway, neither the silver mines nor the cathedrals nor the excellent food from the Pavince Dacicky ('c' is pronounced 'ts' in Czech, they tell me) restaurant is why anyone visits Kutna Hora these days. No, it's something altogether stranger - the Sedlec Ossuary, more commonly known as the Bone Church. From the outside it's an unremarkable place. 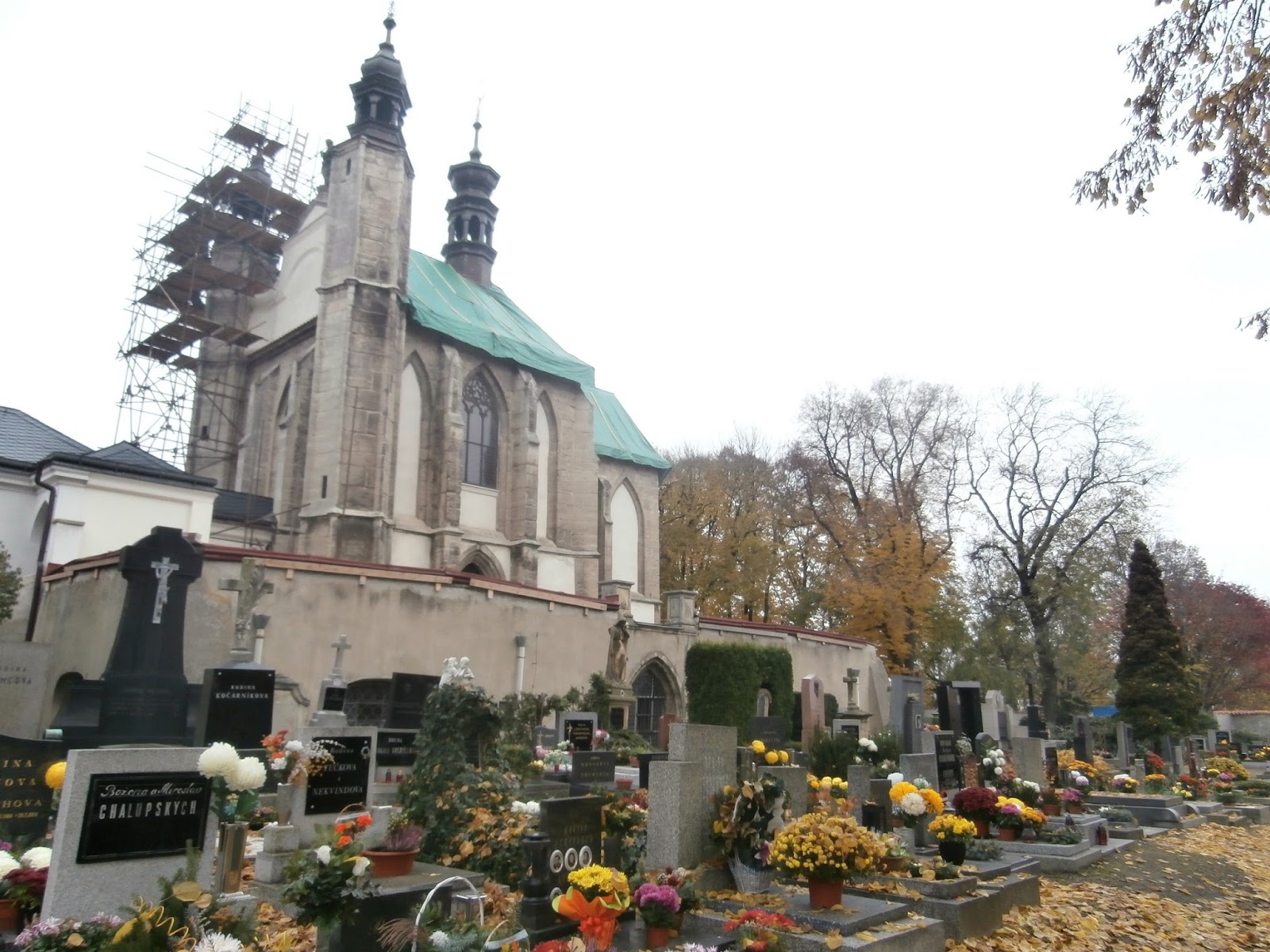 The interior is another matter entirely. It's just one medium-sized room, but what a room. The great Uzbekistani conqueror Tamerlane, once known as the Scourge of God and the Fear and Terror of the World (now quite forgotten by Western society), was, in his day, famous for not merely razing cities but for so utterly annihilating them that he planted fields of barley in the ruins. His more macabre signature was to also leave behind great towers built of the skulls of the city's former inhabitants. Well, Tamerlane never made it this far, but the ossuary is one place where you can get a very good idea of what said towers may have looked like. 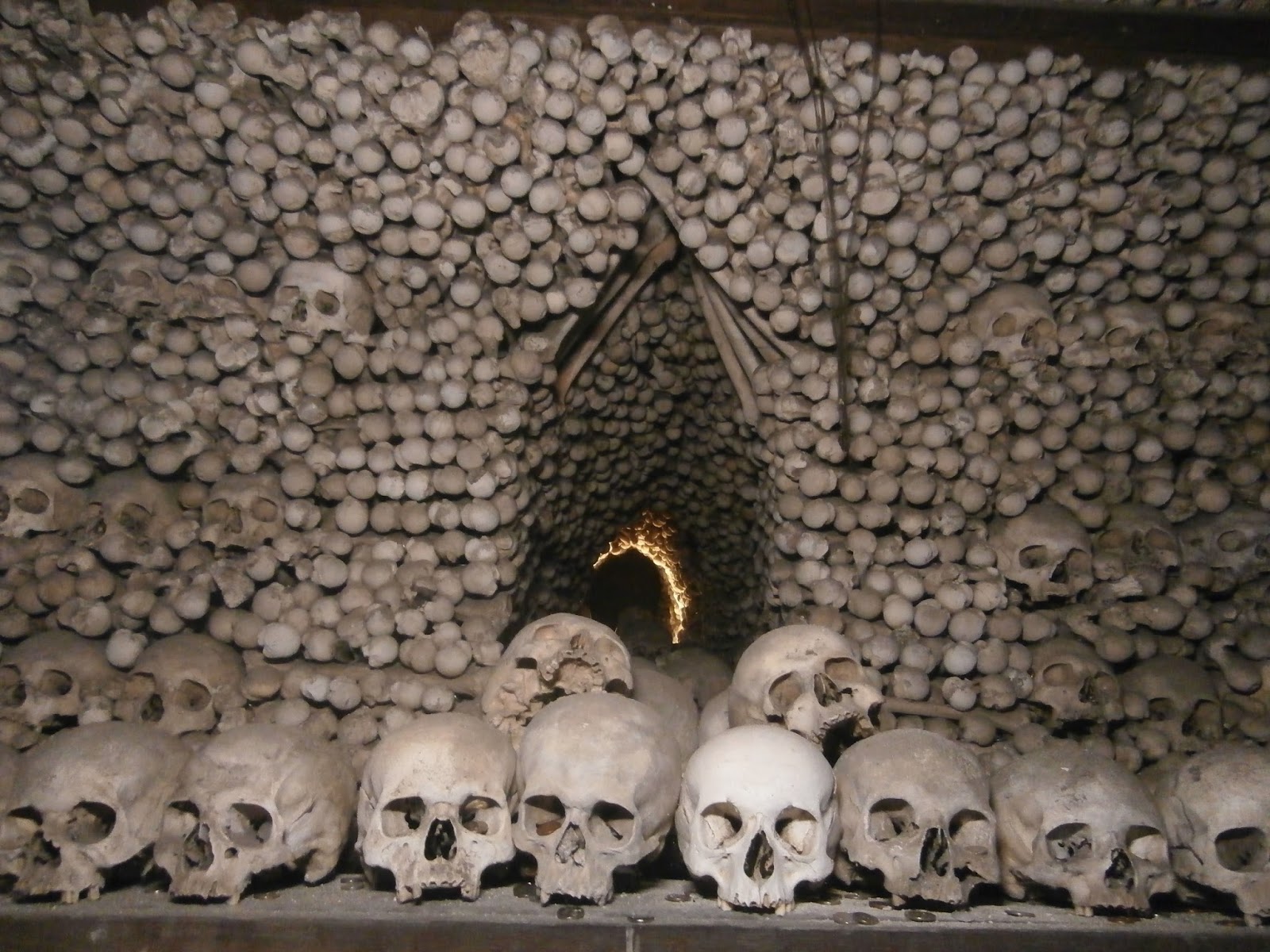 Remember that scene in Return of the King where rivers of skulls burst out of the mountain ? I instantly started to take that a lot more seriously. Most of these bones are apparently from the remains of over 40,000 people buried here who died from plague and wars. Given the number of leg and arm bones on display, a figure of thousands is not implausible. 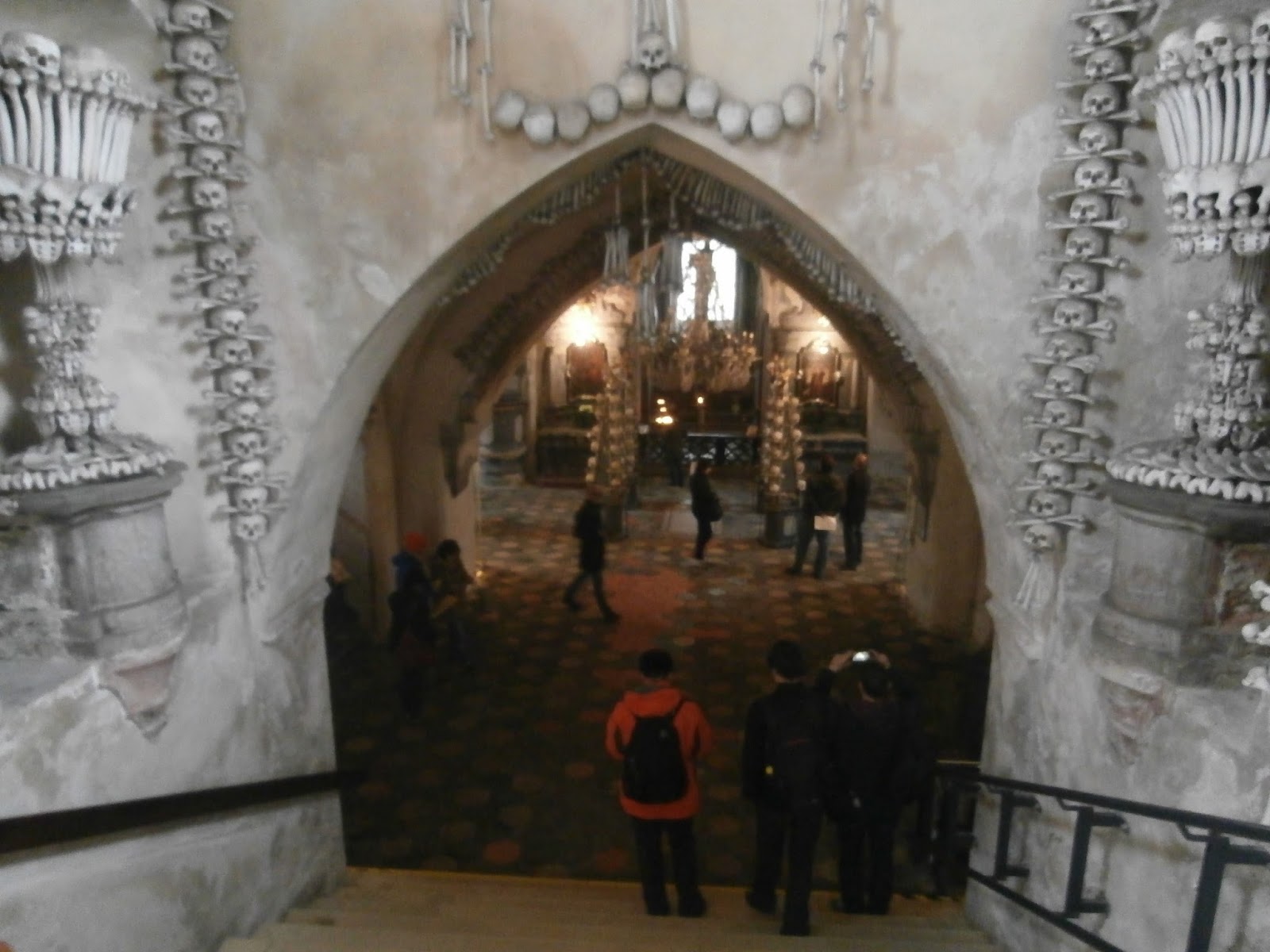 Yet the whole place doesn't feel like a house of horrors. It doesn't feel reverential like a tomb, either, it just feels surreal. There's the bone coat of arms, complete with skeletal raven pecking at a skull... 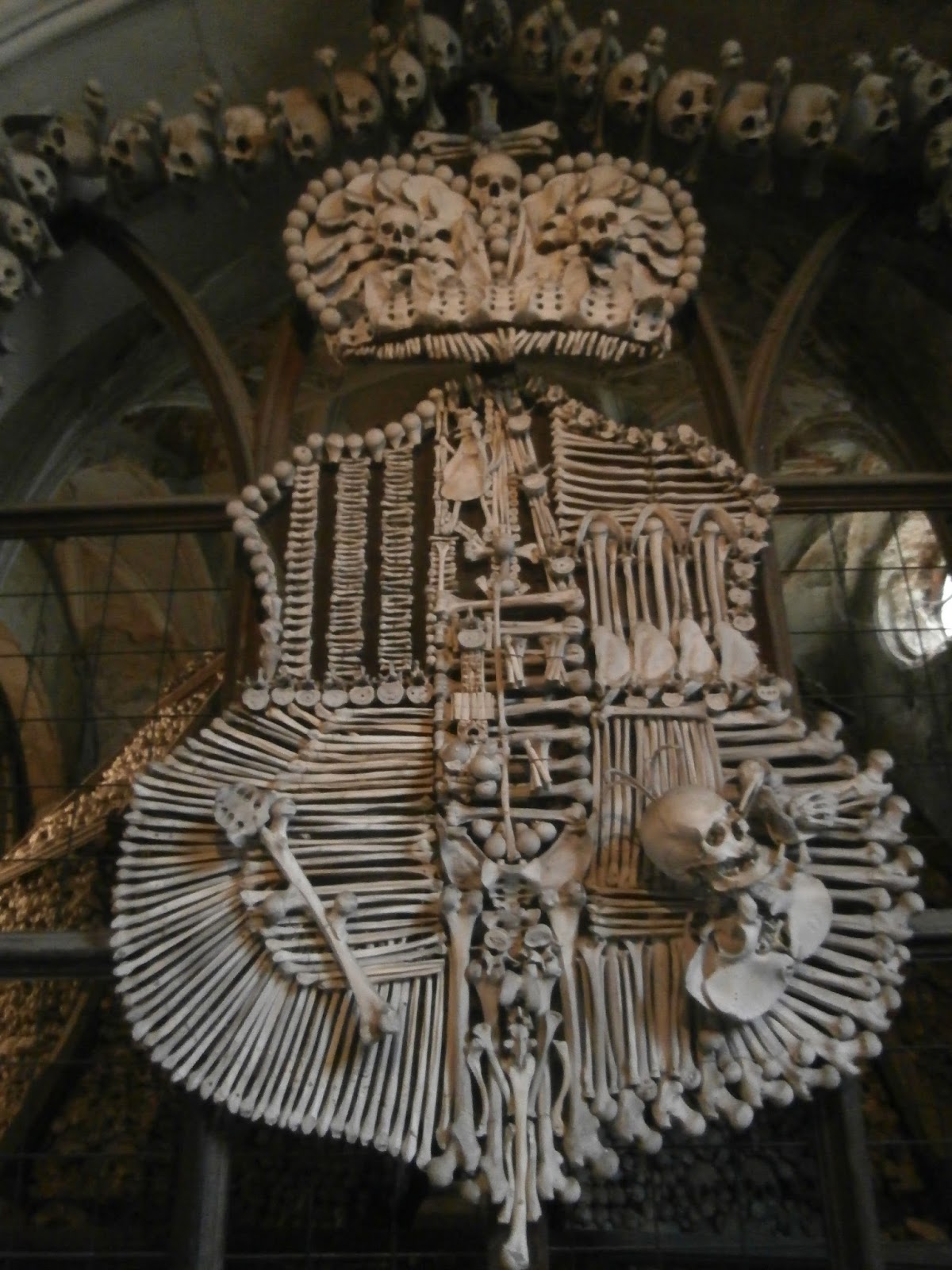 ... and, though one hesitates to speculate as to why, little statues of naked children playing trumpets. Best to leave that one well alone. 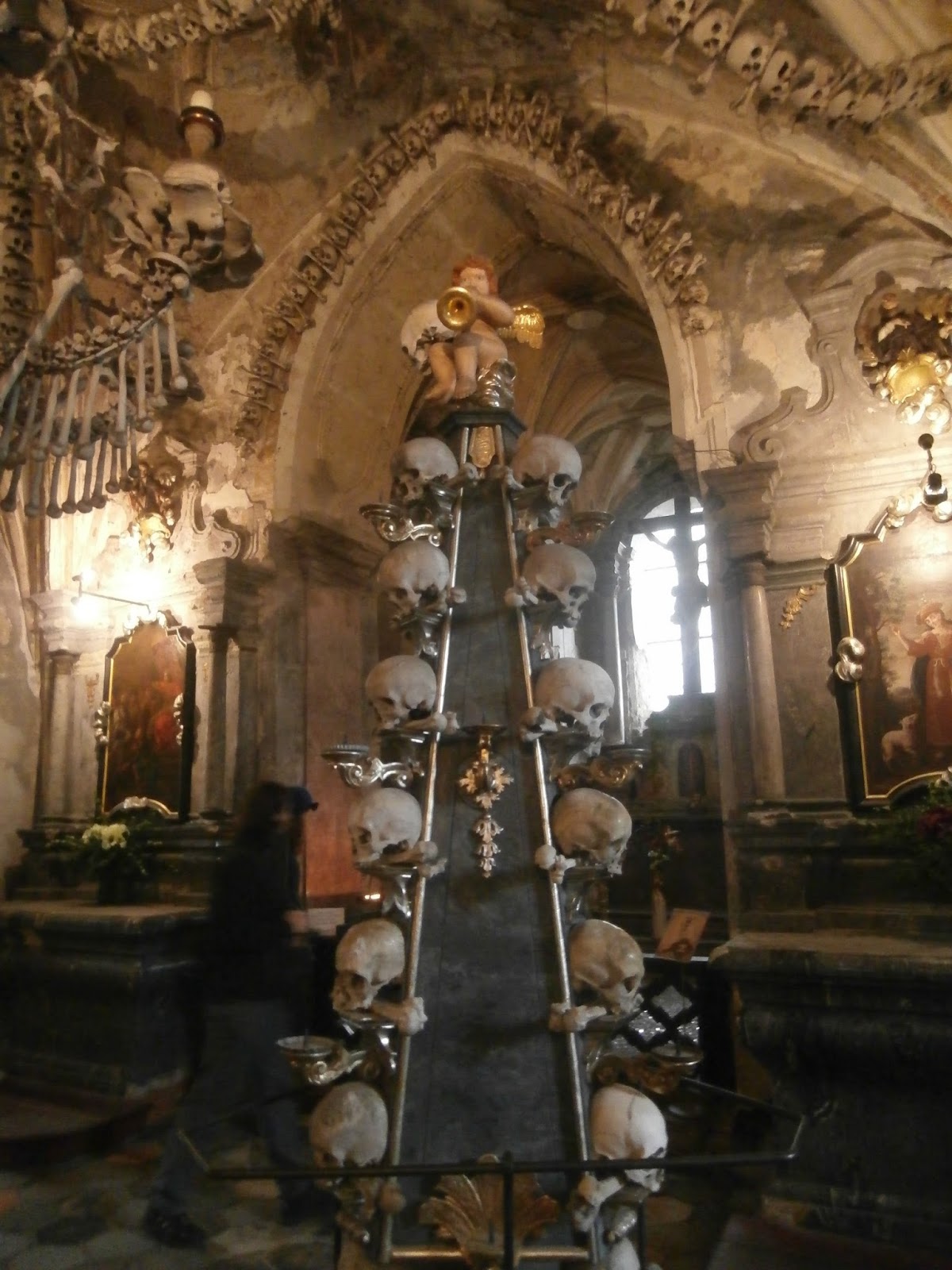 In any other crypt, hanging strings of skulls from the ceiling like tinsel would be talking point enough, but here they barely register. The designer of this place would probably have laughed in Tamerlane's face, or at least chuckled quietly to himself when safely out of earshot. 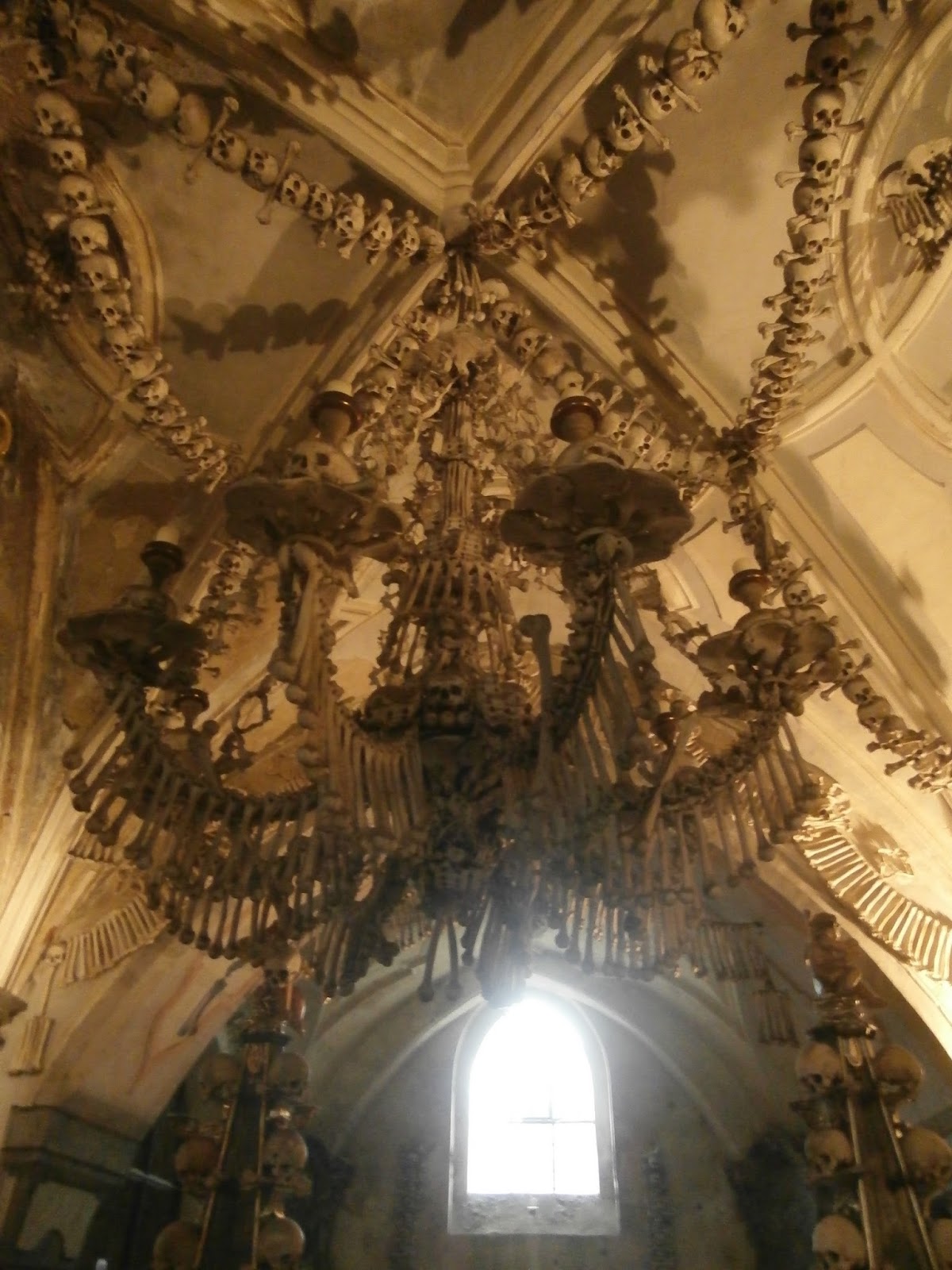 If memory serves, legend says that the pyramids were constructed by some half-blind medieval monk, while the more complicated "decorations" were added in the 19th century by a sculptor. Somehow it didn't seem to matter. The whole thing was so arrestingly strange that reading the history of the place would have been like - to borrow a previous observation - using the free wi-fi in a gentlemen's establishment.

Oh, and one more thing. The times, they are a changing, and even places like Sedlec have to stay relevant to our modern, capitalist, consumerist world. Most importantly, they've got to stay interesting to the young people. It isn't enough to have a chandelier made of bones any more, you've got to have something people can really engage with. At least, that's my explanation as to why there's also an alternate version of the ossuary available in Lego form. 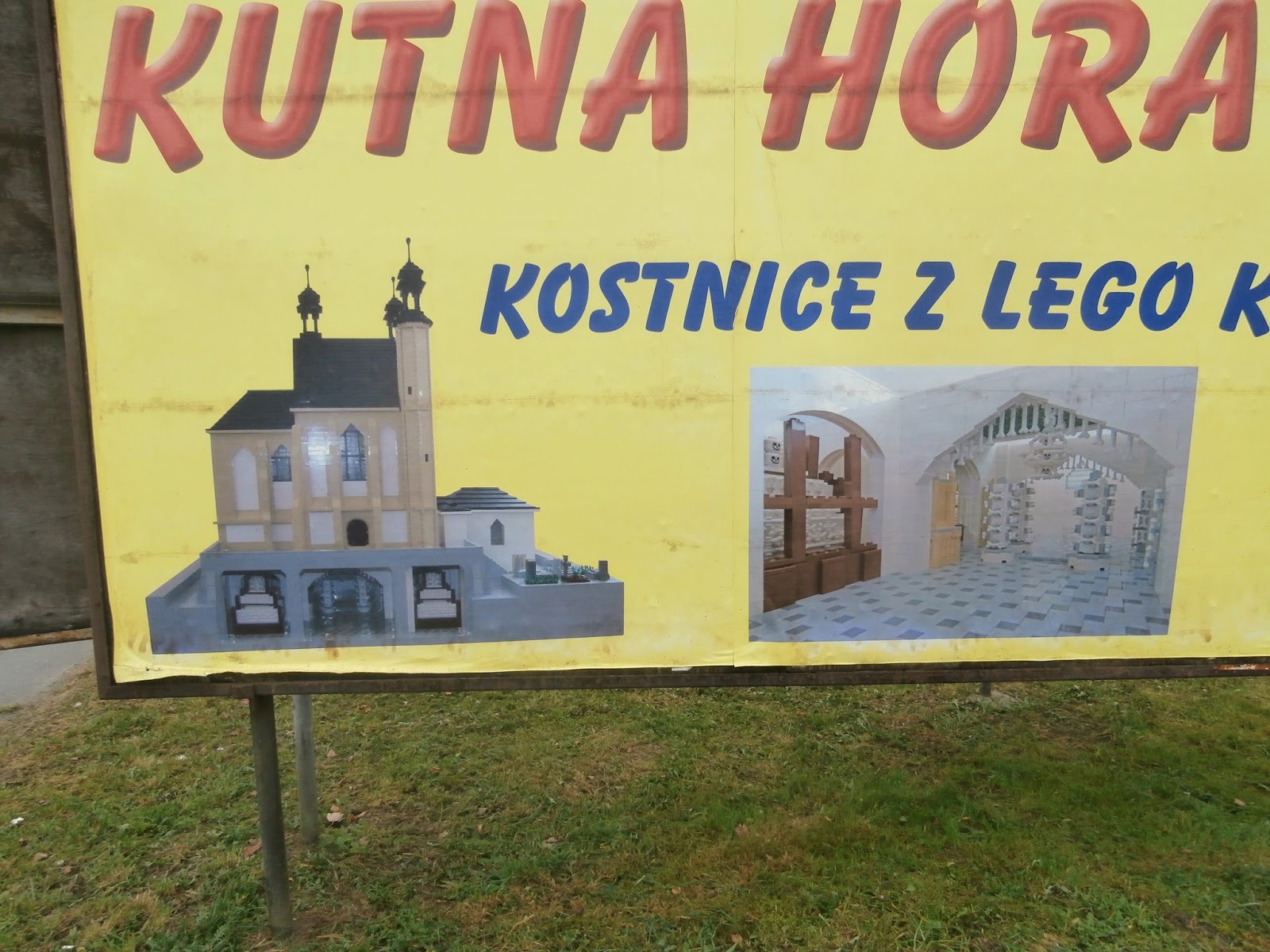 Conclusion ? Beneath the cool Czech exterior beats the heart of an artist. An artist with a knife. And a big box of Lego.
Posted by Rhysy at Saturday, November 15, 2014