Six weeks or more without a blog post is long enough that I started to wonder if I'd disappeared. Maybe I'd decided to go off the grid and live the dream of being a reclusive hermit in Antarctica, or something. Imagine my delight when I discovered I hadn't disappeared at all ! I was here the whole time, just not posting anything. Well, that was a relief, I can tell you. Time to remedy this prolonged absence by clearing a backlog of "things I meant to post but just didn't".

July saw a visit to Vienna. Nice place, but too expensive. Difficult to find anywhere you could get a decent meal for less than €30 (yes, the European Union is still calling its currency "Euros" despite the fact I told them not to). Vienna also scores poorly as having one of the most outrageously expensive conference dinners of all time. For €65 (!) we got a tasteless meal on top of a hill. Sure, it was a nice hill, but the food was basically reconstituted cardboard.

The city itself is rather better. The Stephansdom cathedral is certainly impressive. It's taller than Prague's St Vitus and less crowded. It's also got a roof. Admittedly, most cathedrals have roofs, but not usually anything worth mentioning. 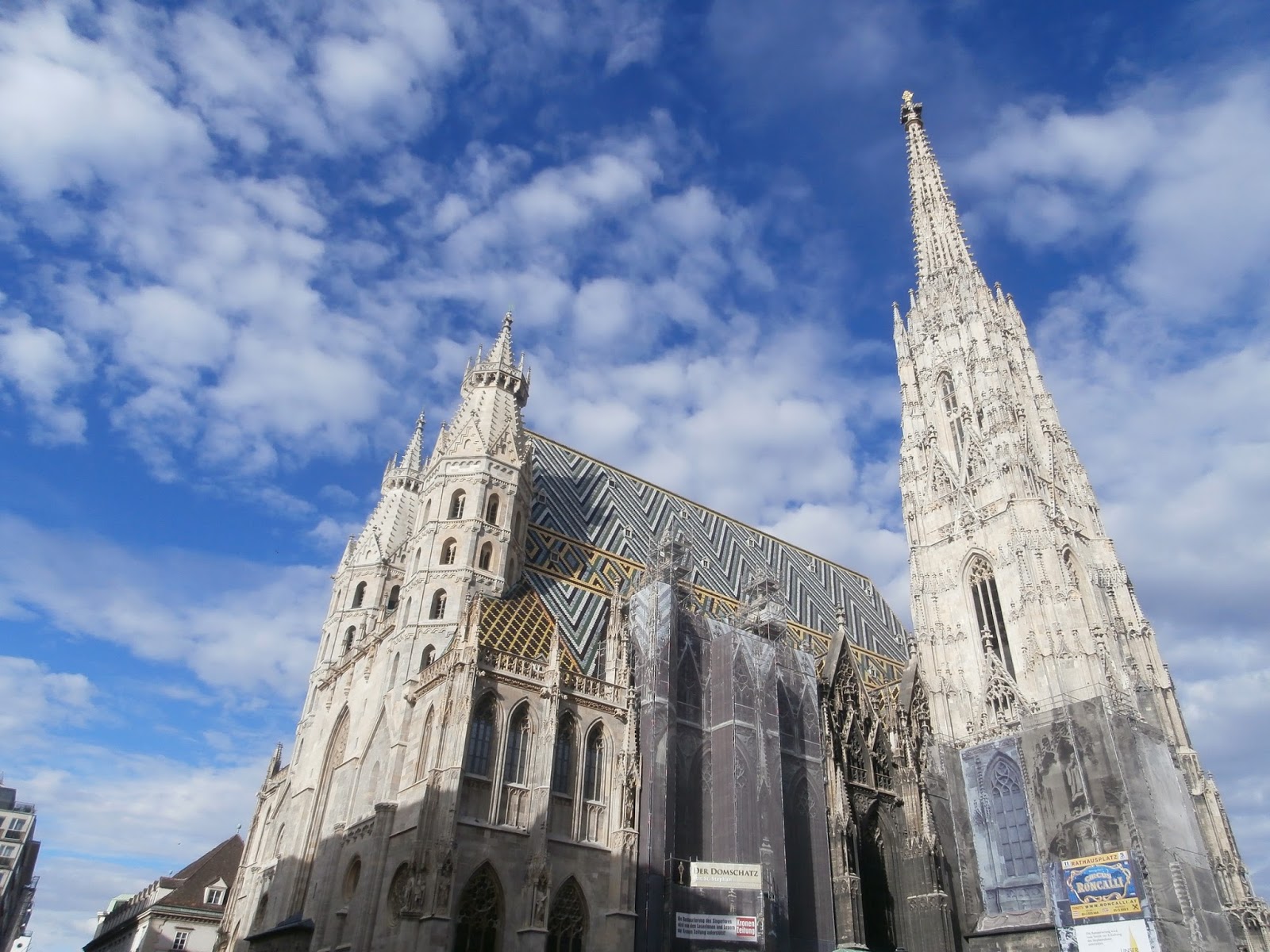 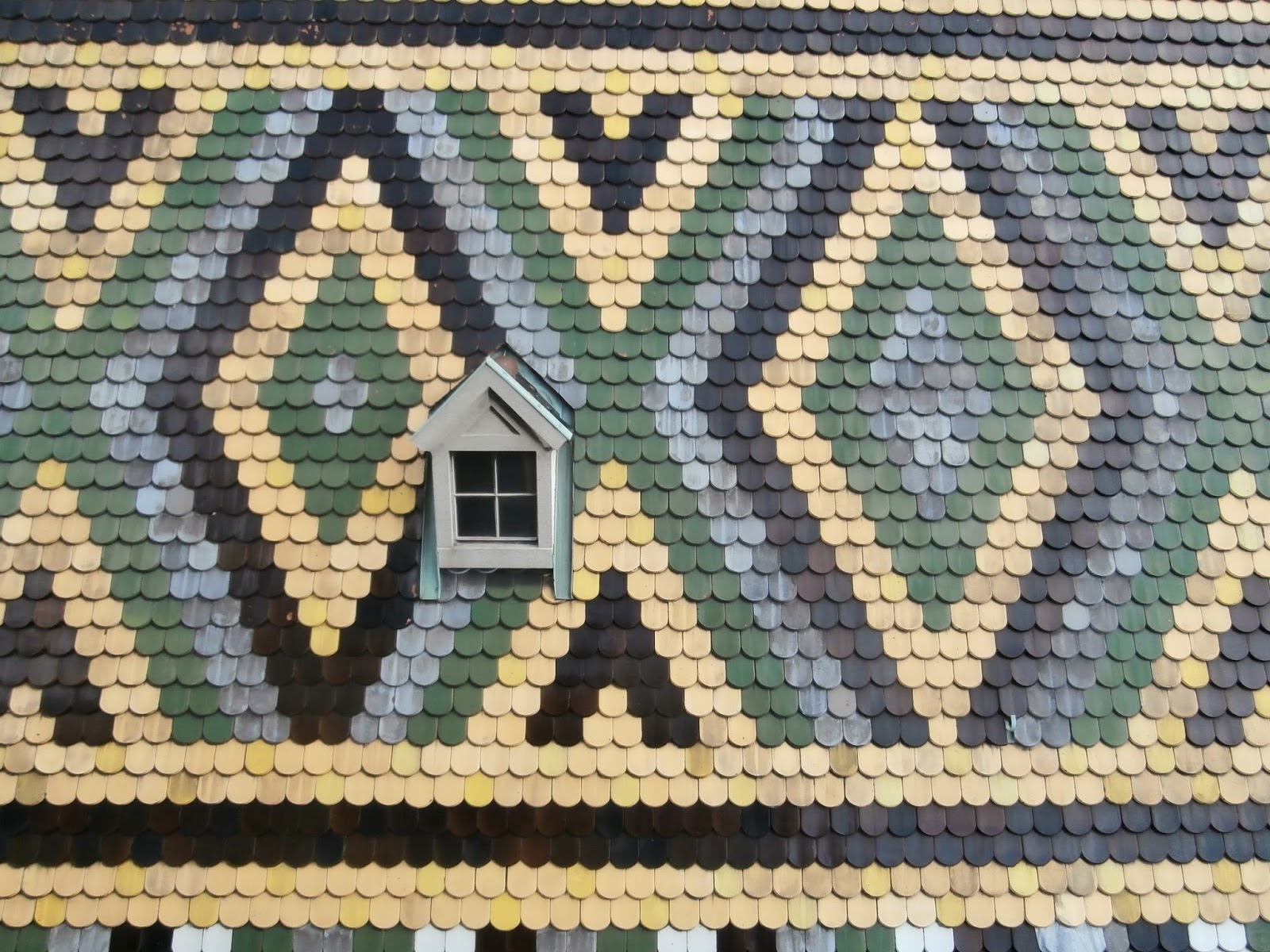 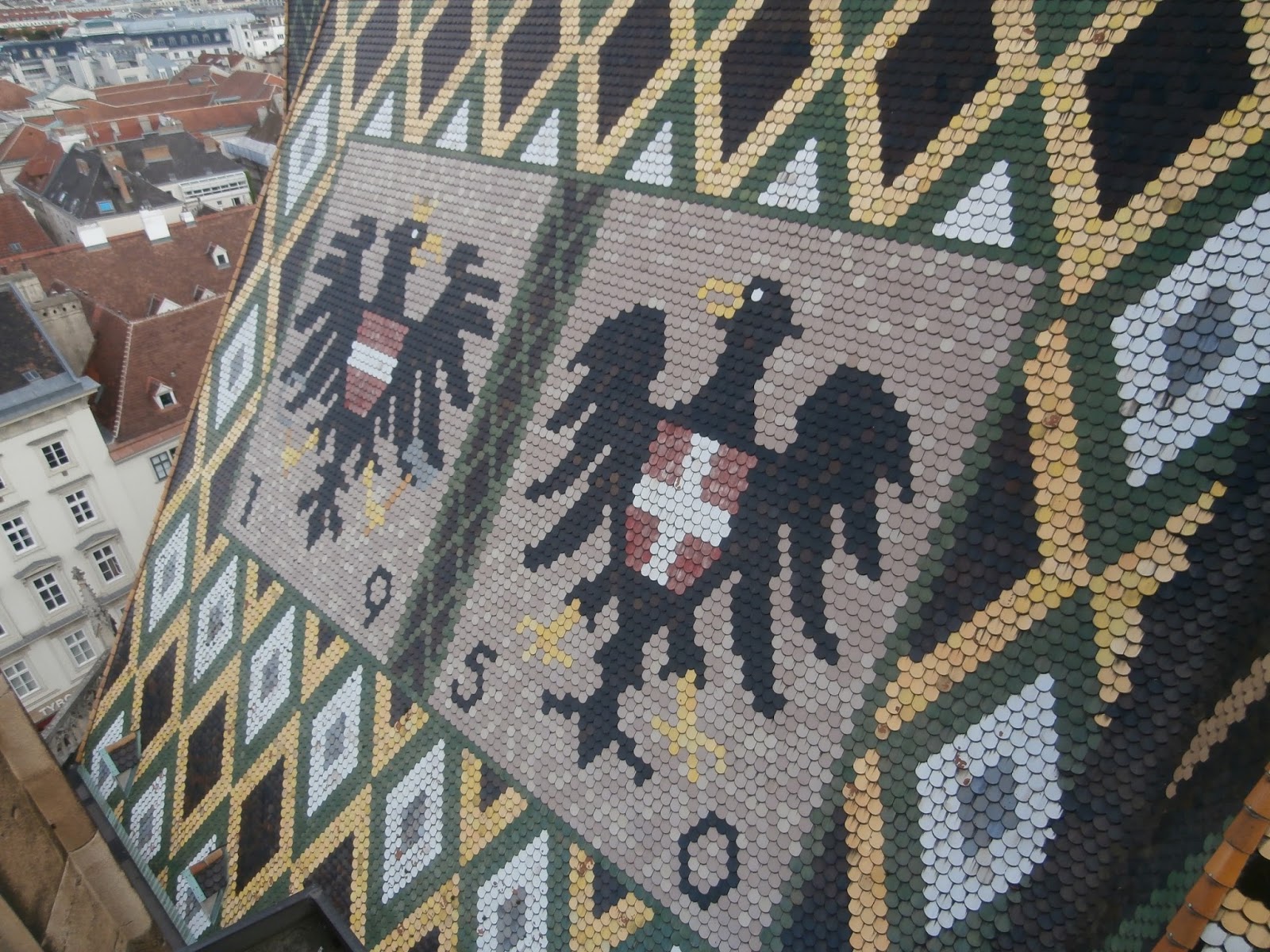 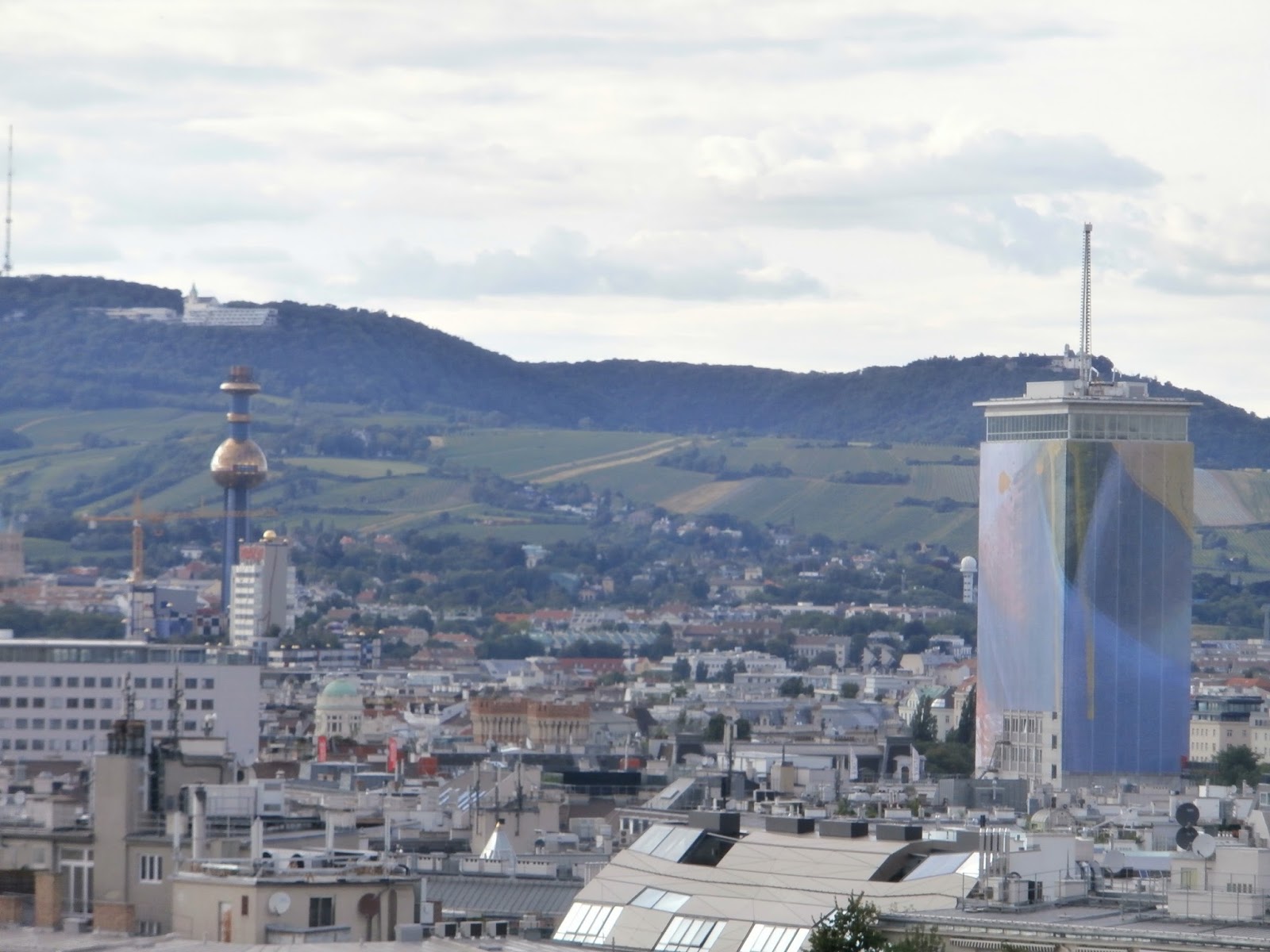 In fact it must be acknowledged that Vienna is a far nicer place from the ground.

As usual I went without doing a single piece of research into the city, on the grounds that surprises generally make everything much better, About the only famous building I was aware of beforehand was the Schonbruun Palace. I'm sure this is a interesting place if you have a) decent footwear and b) sunglasses. I had neither. Seriously, the grounds were designed by Bloody Stupid Johnson. In summer sunlight I found it physically impossible (actually painful) to even see anything, on account of the blinding white gravel arena stretching maybe six thousand miles in all directions. Only after trudging on my blistered feet across the burning wasteland into the shade of a hedge was I able to realize that in fact, it was quite a nice palace I'd been standing next to. 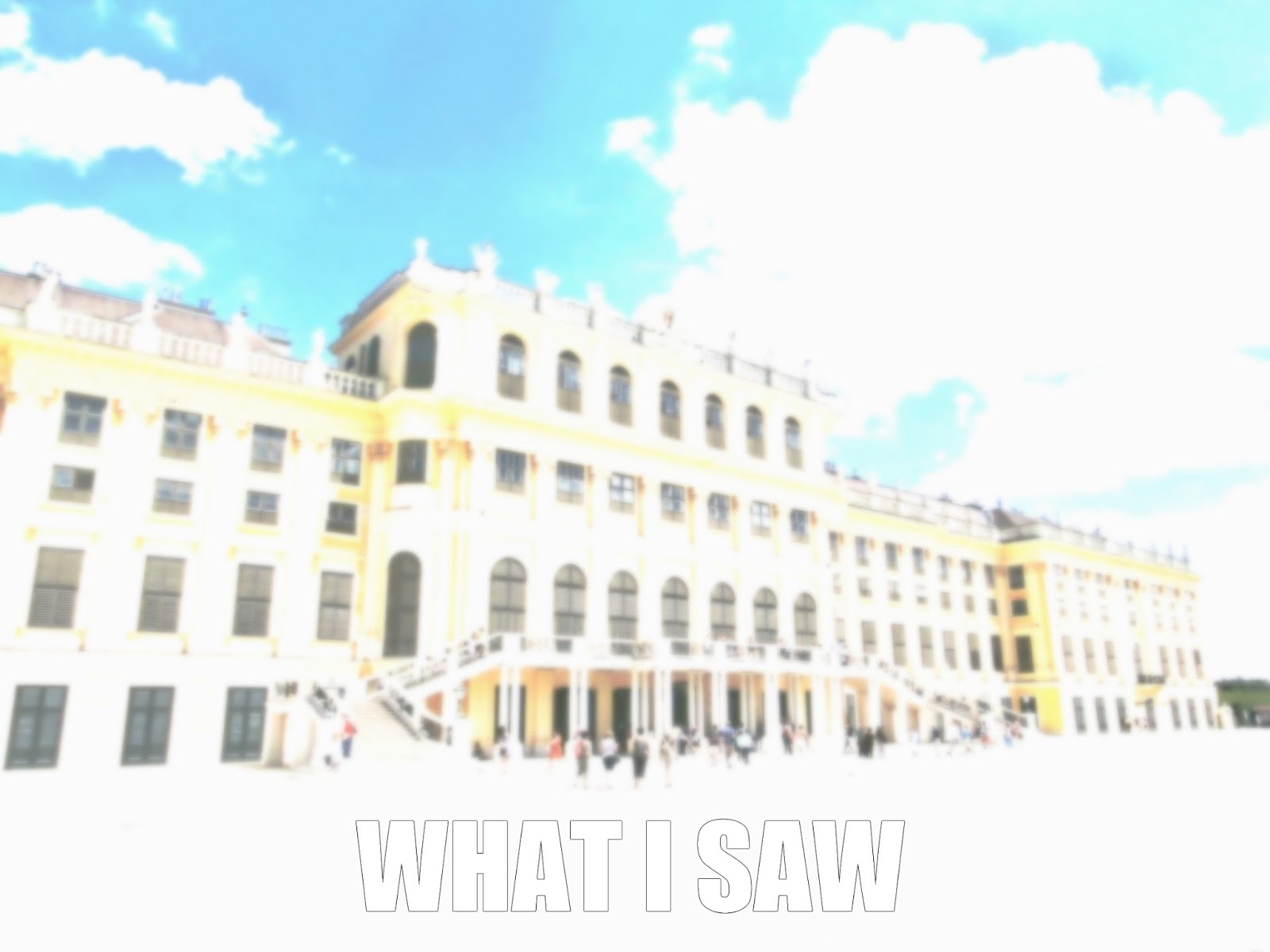 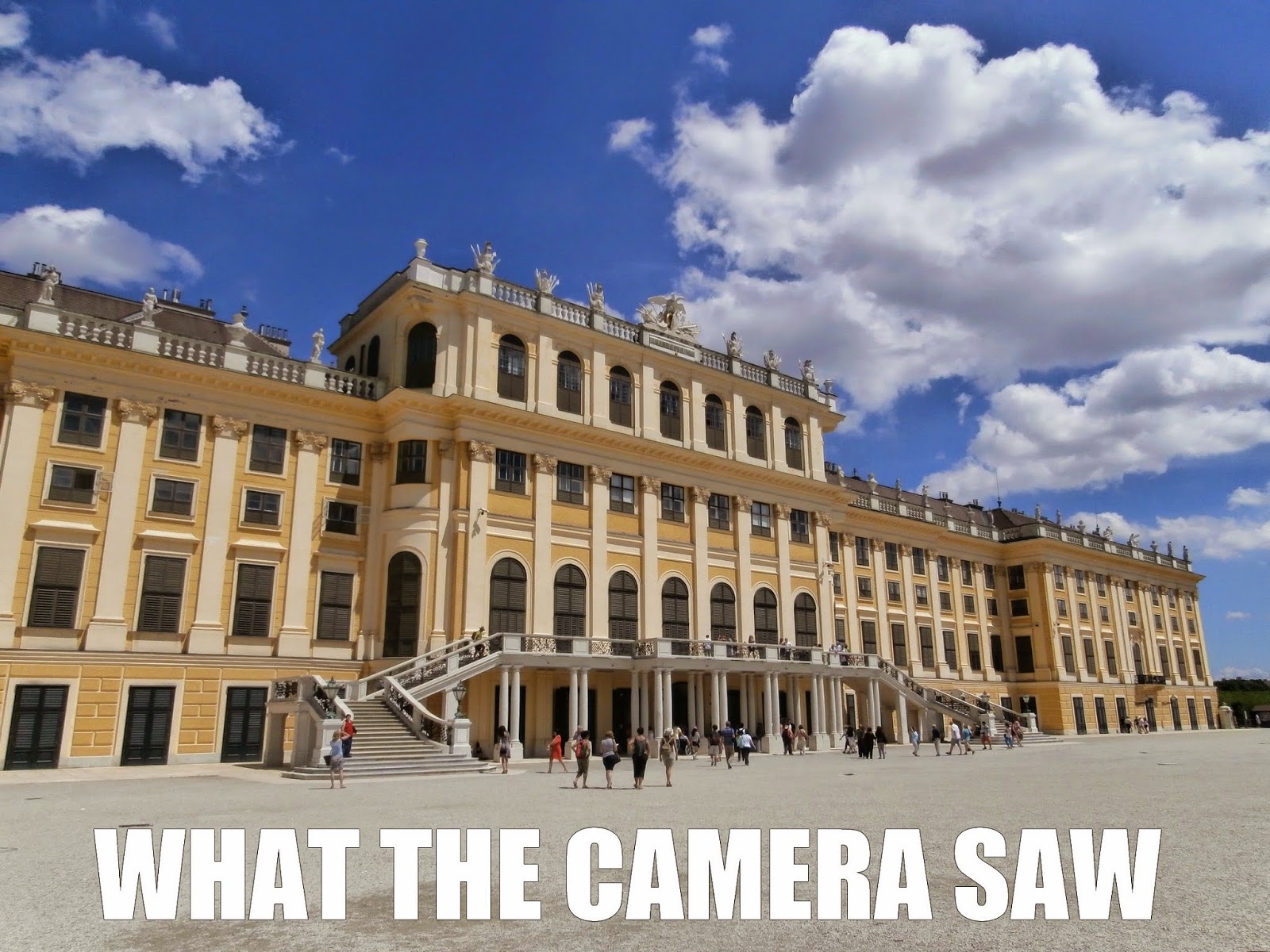 I therefore conclude that the Hapsburg Emperors wore dark glasses at all times, something sadly lacking in portraits. The palace also has 1400 rooms, mostly for sitting down in and looking at portraits. This made the tour's claims that the Emperor Josef lived a modest lifestyle somewhat... stretched ? Yeah, that'd be the one. You can't say the grounds aren't nice though, because they are. 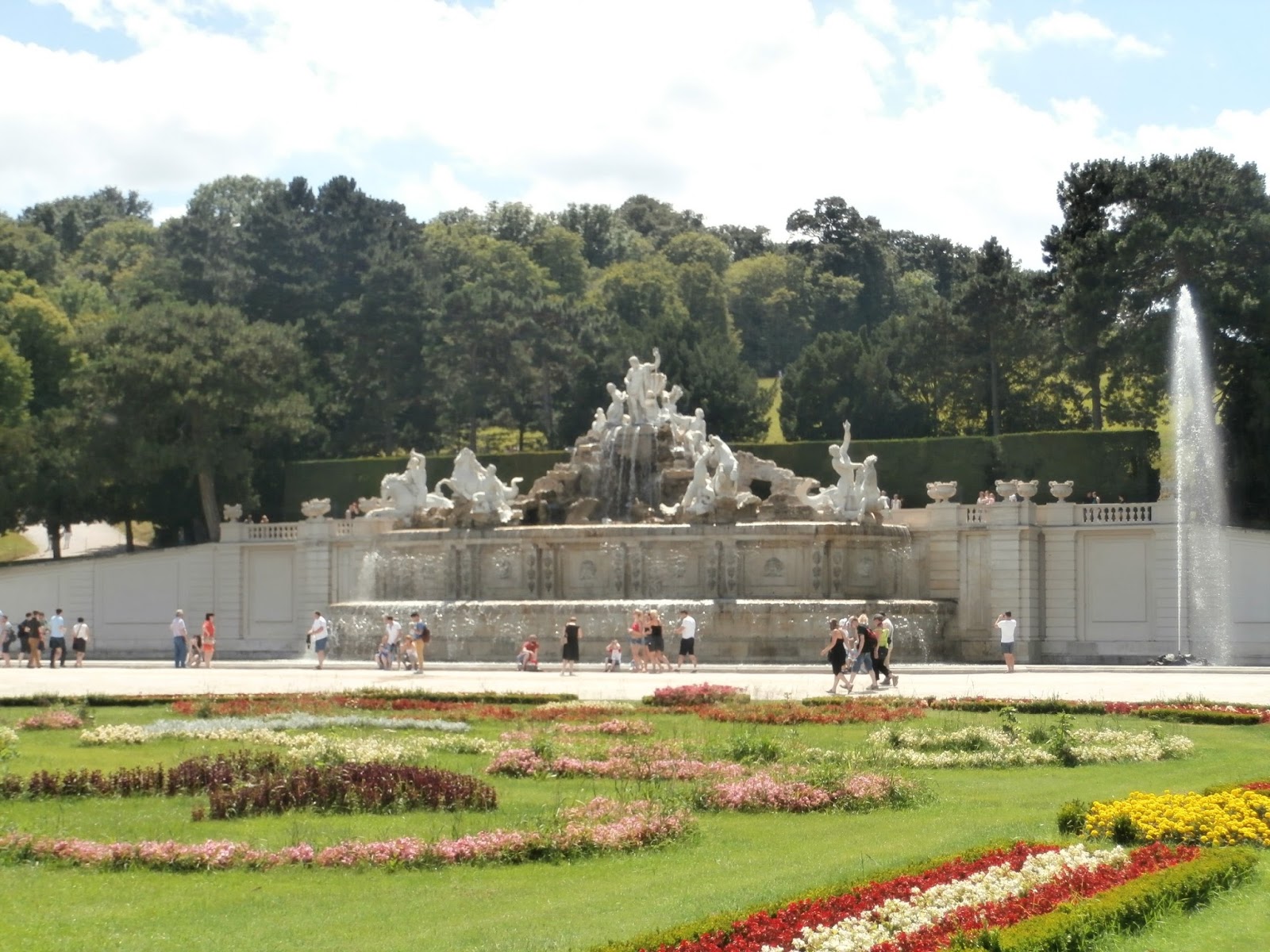 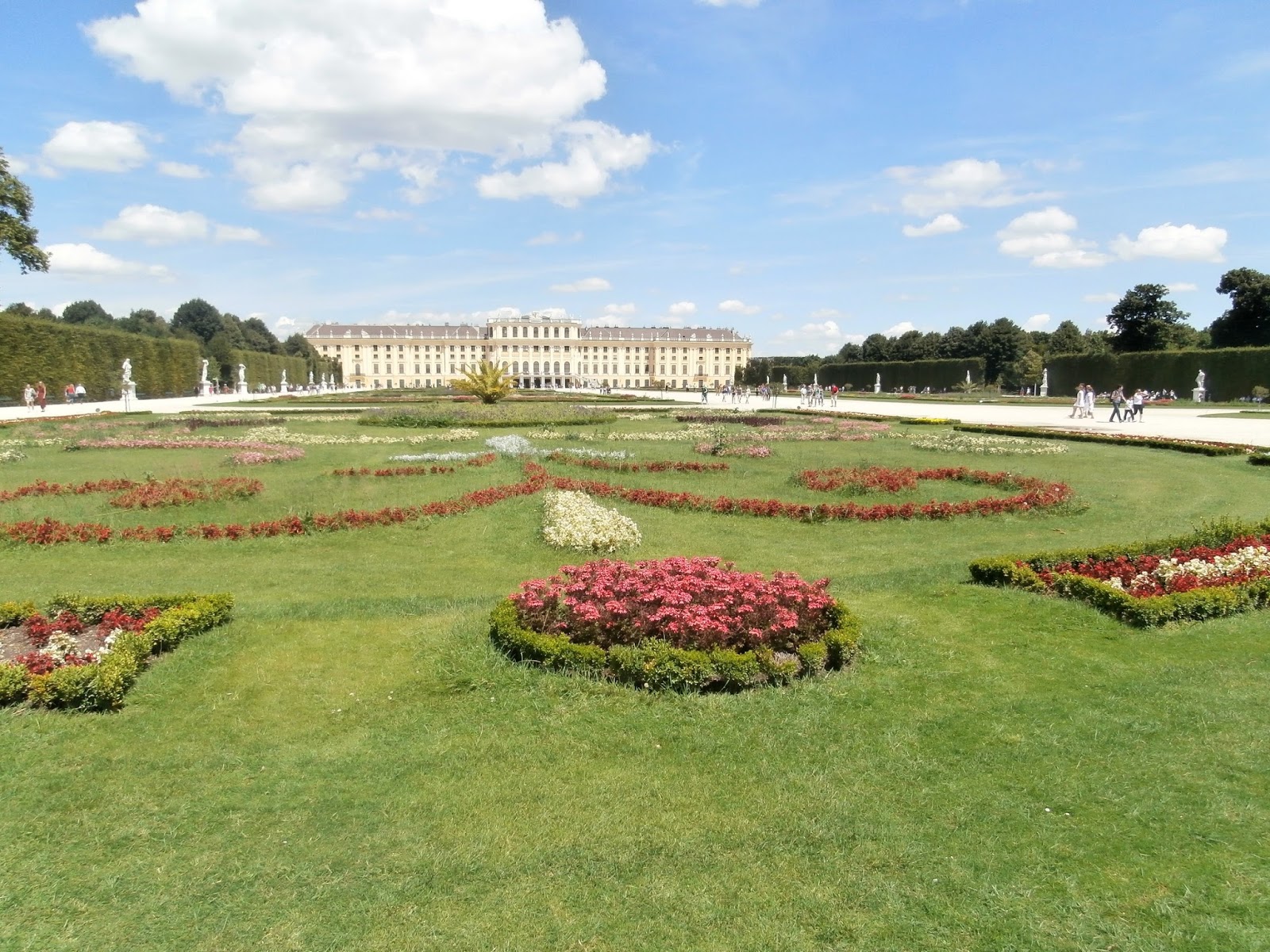 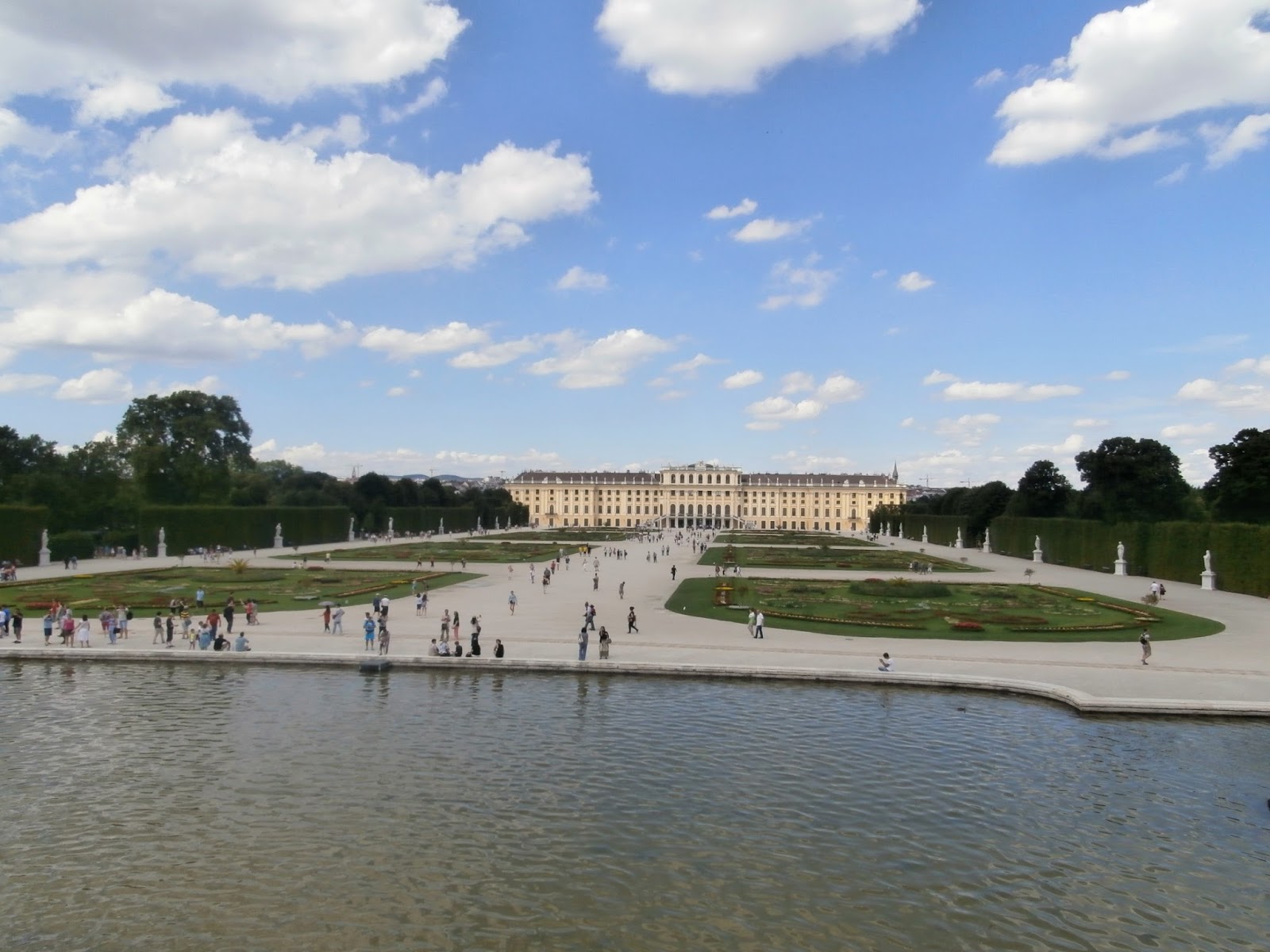 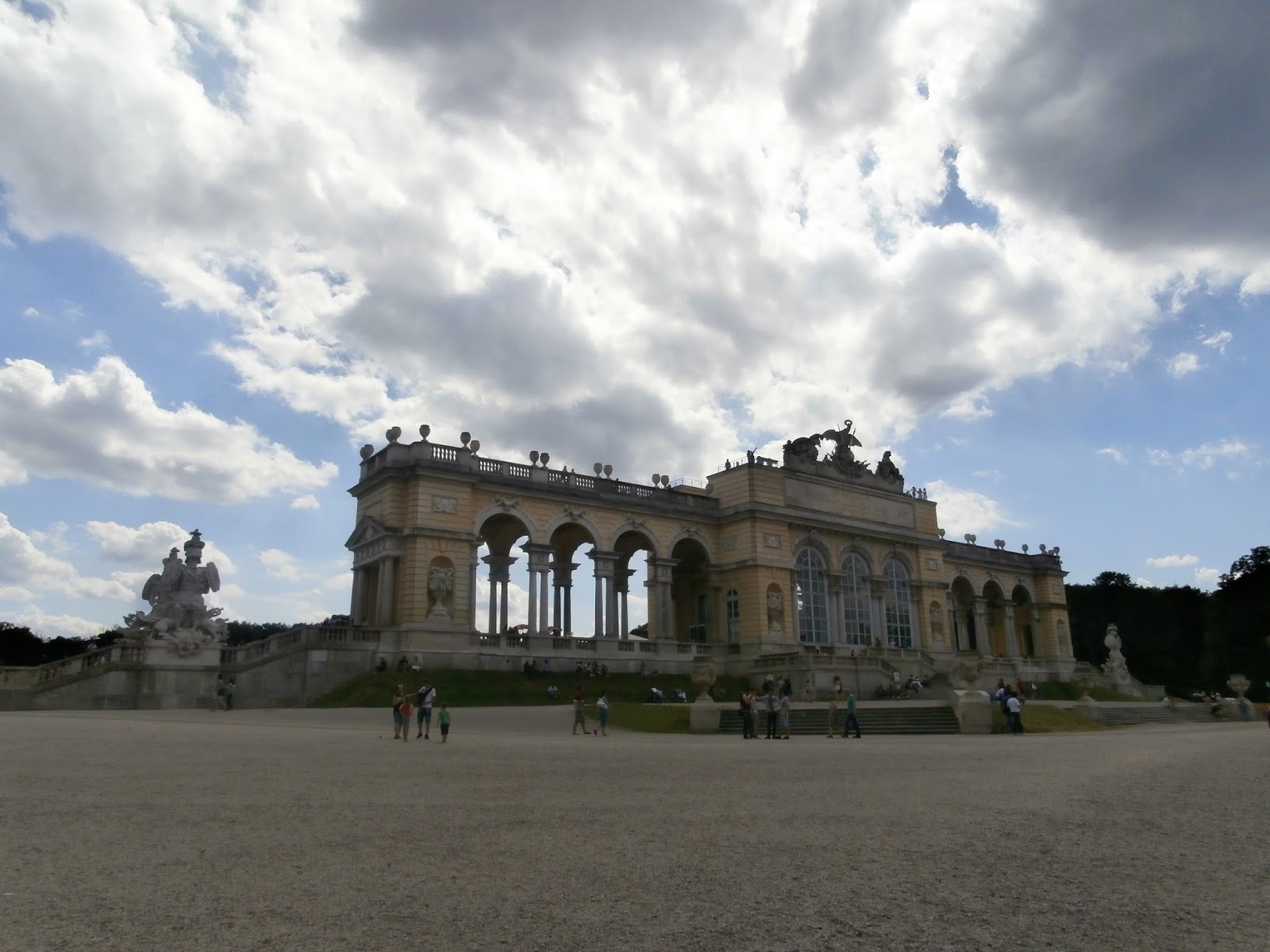 Some of the statues in Vienna are also worth mentioning, because they were clearly designed by the time-honoured method of pick-and-mix. I can't think of any other reason you'd want a ten-foot tall statue of a legless Roman with shields for arms and a plant for a head. The animals are even better, for instance, the mer-horse must surely be the most unfortunate creature that never existed. The head and forelegs of a horse... with the tail of a fish. It could neither swim very well, on account of its great clunky legs, nor walk on land any better than an overgrown mudskipper.

Then of course there was a creature I immediately christened the porno-sphinx, for obvious reasons. 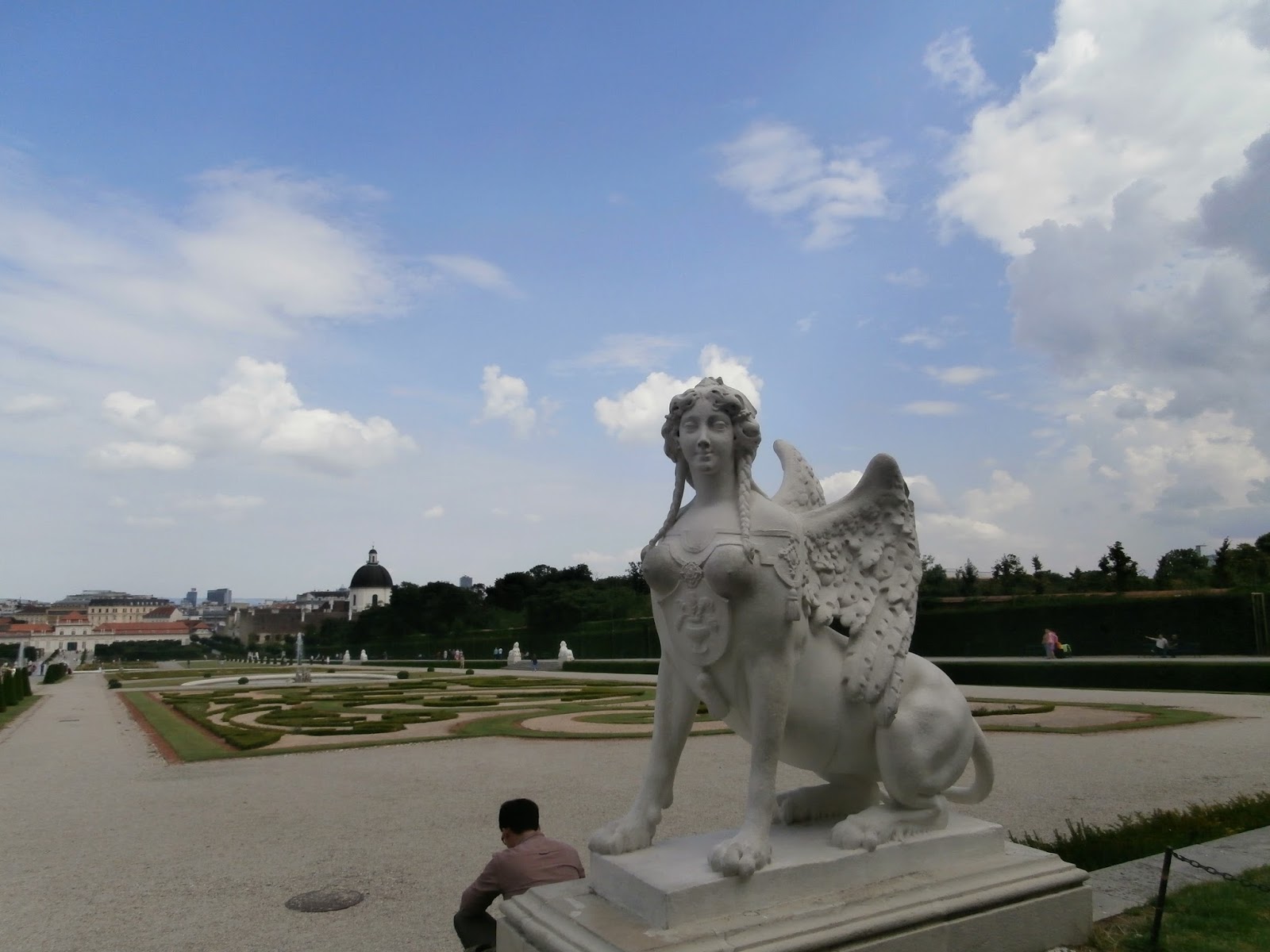 One more statue must be mentioned. I cannot think of a witty retort that's funnier than the statue itself, so I won't bother writing one. 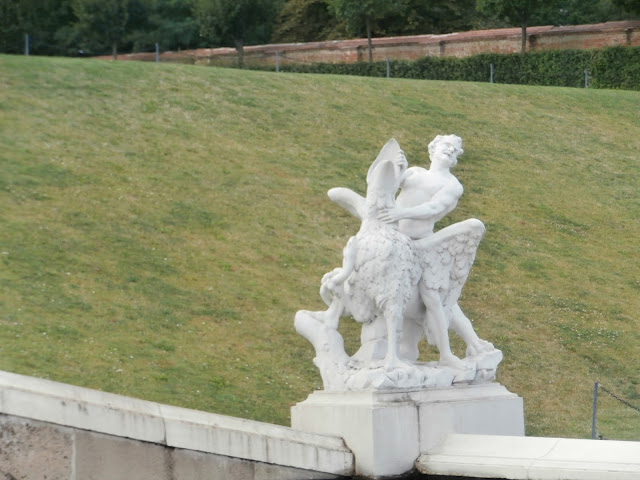 The best bit about Vienna were the tombs of said Hapsburgs. It's not quite Tutankahmun, but they were certainly in the running for "most epic coffin", and they easily take the "most gothic" title. Apparently there was simply no-one to tell them basic things like, "no, you can't have a coffin large enough to hold a dinner party in, that's a bloody waste of money, you twit". So the coffins start small enough - ostentatious, certainly, but not remarkably so... 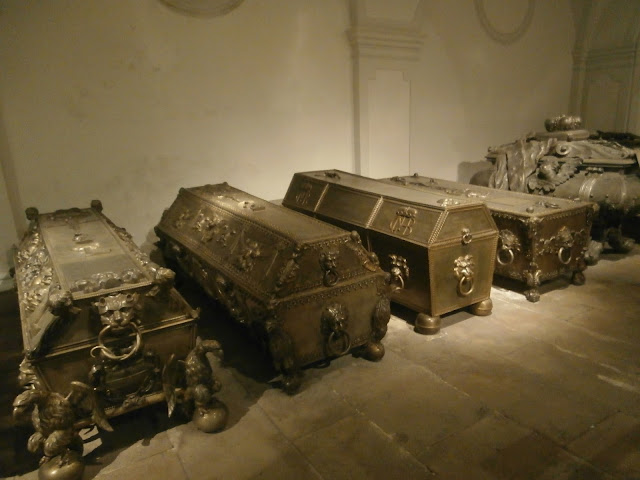 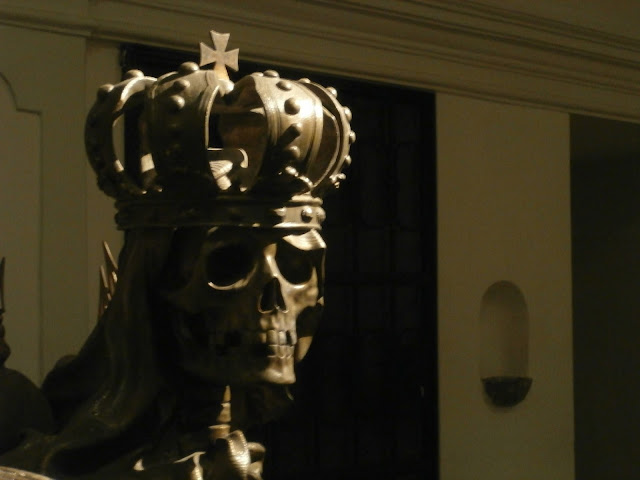 ... and then they get enormous.

The Prater funfair provided a less morbid diversion. Vienna may be chock-full of sophisticated cultural icons, and this is definitely not one of them. It is as tacky a place as you'll find anywhere. Rides are disguised as giant plastic snakes. Some of the buildings are adorned with what are probably the least scary-looking monsters since Sesame Street. I loved it, but by this point, I was beginning to wonder if Vienna's reputation as the beating cultural heart of Europe was really all that well-deserved. 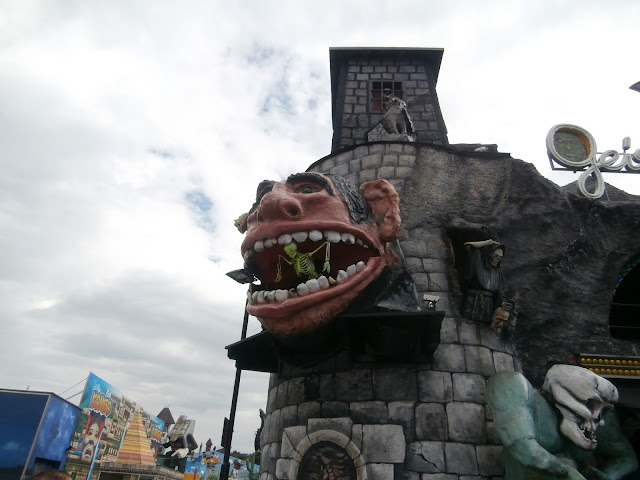 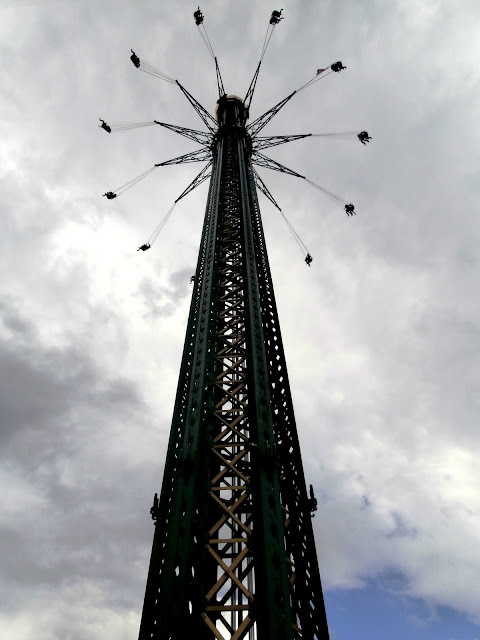 Obviously I didn't take any photos from the top - I'd probably have killed some unfortunate tourist far below, and worse lost my camera - but later a Ferris wheel provided a similar view at a more leisurely pace. 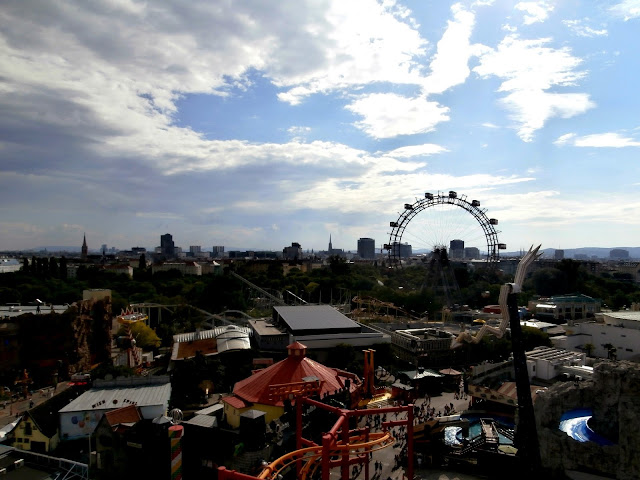 Somehow I always find it particularly amusing being with other scientists in unexpected locations like this (especially more senior, well-known ones who shall remain nameless). I guess it's largely a case of having endured reading their incredibly dry and uninteresting papers* and discovering that they're a diverse and largely affable bunch. Some more than others, of course... some will discuss complex technical details late into the night while others can be found... indulging themselves. But for more on scientists behaving unexpectedly, as well as a tourist attraction that makes the Habsburg's coffins look positively sane, tune in next time. Unless the next time is a science post, which it might be, in which case tune in the time after that.

* This, as readers will by now be aware, is largely a product of the godforsaken reviewers more than the authors.
Posted by Rhysy at Tuesday, November 11, 2014