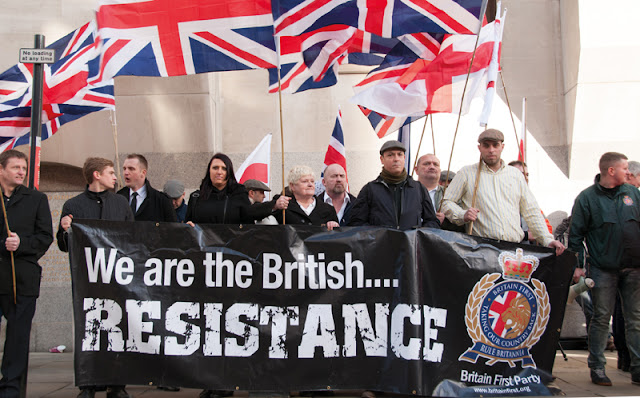 This idea comes from a nice lady on the internet by the name of Ruth McKay, who writes :

We needed a few tub thumping, fist waving, knee jerking bigots on our side, spreading fear and paranoia - people'd have listened to that. Our insistence on reason and facts (well, mostly) is the cause of this monstrous fiasco. ﻿Reason and facts?! I mean, honestly, you couldn't make it up. ﻿

Well now there's an interesting idea. Can we redraft the Remain campaign in terms that Daily Mail readers will understand ? That is, nationalism must run rampant, a stench of xenophobia must permeate everything (occasionally flirting with abject racism) facts must be chosen selectively or not at all, ideology must always prevail, and anecdotes must always win over statistics. I find it bizarre that the Remain campaign was branded, "Project Fear" by the Leave group, even while they themselves painted foreigners as hordes of terrorist benefit cheats looking to steal our jobs. So fear of the mythical other must dominate over fear for ourselves. And there have to be occasional token gestures of moderation just so people can say, "obviously it's more complicated than simple racism", thus missing the point catastrophically.

Some ideas are just too perverse not to try, so here goes. I will focus on the three main issues of the real campaign : foreigners, sovereignty, and expense. But not necessarily in that order. Let us begin with a headline based on the excellent Daily Mail-omatic. It should go without saying, but for the love of all things holy don't bother to fact-check this. It is very deliberately a mixture of facts, bullshit, outright lies, and stuff I just plain made up of the top of my head.


As Westminster fat cats plan to hurt the decent, hard-working people of this country, we ask :

WILL LEAVING THE E.U. GIVE BRITAIN'S SWANS CANCER ?

Ministers are secretly plotting to take the U.K. OUT of Europe and plunge the economy into an "unprecedented" recession, the Mail can reveal.

Sources close to the Prime Minister confirmed that left-wing bureaucrats are determined to prevent the U.K. from receiving any of our hard-earned European cash and ending our special exemptions that give us unique power and influence on the Continent. The move is likely to cost the British economy tens of billions of pounds, take the nanny state to terrifying new levels, open the floodgates to illegal immigrants, and strike a crippling blow to British sovereignty, the Mail understands.

The political correctness of the Westminster establishment looks set to threaten our country as never before. Ministers are reported to believe that the U.K. is "stealing" billions of pounds each year from Europe, despite the fact that we are fully entitled to every penny of that hard-earned cash under clear regulations the British government imposed on Brussels. Europe willingly accepted economic integration as the price for our membership, but now Westminster cronies are using populist rhetoric to convince voters that our great country is nothing more than a European "parasite".

In yet another example of the loony left trying to have their cake and eat it, other ministers are reported to believe that the E.U. is a "luxury" that this, the world's fifth largest economy, supposedly cannot afford. While out-of-touch ministers bandy around figures for political point-scoring, the reality is that the £127.6 million per week that Britain takes from a grateful E.U. is essential for many hard-working British families - with most of those benefits going to the ordinary middle class. Indeed, even without accounting for the massive financial returns from E.U. membership, even our investment into Europe is far smaller than our expenditure on BEER. Once again, the so-called "facts" of the liberal experts are revealed to be paper-thin, while real people suffer as pawns in the statistical games of the bureaucrats.

In a demonstration of utter contempt for the British taxpayer, ministers have further argued that British sovereignty would, in defiance of all common sense, be somehow strengthened outside Europe. These Britain-hating liberals have no shame as they seek to withdraw our country from the world stage in the name of "European liberty".  They despise our political pre-eminence in Europe, with our unique relationship with the United States allowing us to act as a power broker for the world's economic superpowers. Our centuries-long ambition of governing Europe, which needs our guiding hand now more than ever, is threatened by our left-wing elites and a handful of snail-eating European desk jockeys. They are blind to the simple reality that Brexit would see us hand over control of the world's largest economic bloc to the cheese-eating surrender monkeys. Wellington would be spinning in his grave.

The worst lies of all told by the Leave camp concern immigration, which threatens the flow of willing European workers who would rightly prefer to see their taxes go to us rather than their own incompetent governments. Of course, we need a strong policy on immigration, but it's common sense that if we make immigration illegal, we will only have illegal immigrants. That sort of human swarm cannot be allowed to swamp our NHS and other proud public institutions. Instead we've got to keep encouraging the best and the brightest to come here and further strengthen our great country, leaving behind the dregs of society in the impoverished countries where they belong. After all, this time-honoured policy of divide and rule is what made Britain great.

We don't need "experts" to tell us that our country is stronger in Europe. Stronger politically, economically, and militarily. Our global reach is stronger than it has been in decades, and far from being mere puppets of Brussels, as the ostrich-like Euroskeptics would claim, if anything the situation is the other way around. This is a simple, common-sense truth the mainstream politicians would rather not talk about. Just visit an NHS hospital and see the wealth of foreign experience we've drawn to that great institution, or the huge numbers of foreign scientists at our universities - such is the sway we have over other nations.

An Independence Day, Nigel ? No sir ! That is something for lesser countries. We don't need to take our country back, because it is we who give other countries independence. It is we who govern nations that cannot govern themselves, not the other way around. No-one has taken our country from us in a thousand years, so vote Remain to keep us where we belong : a great country that others can only envy, neither ruling nor being ruled by Europe, but leading it into a bright, prosperous future where Britain wisely governs the nations of Europe. Let the French and the Germans and the rest be subject to us, not us be subject to them.
Posted by Rhysy at Tuesday, July 05, 2016