Look, another travel post ! Not a long trip to foreign parts, but a nice walk in the Czech Republic.

One of the most popular Czech tourist destinations is Karlstejn Castle. It's very nice, look : 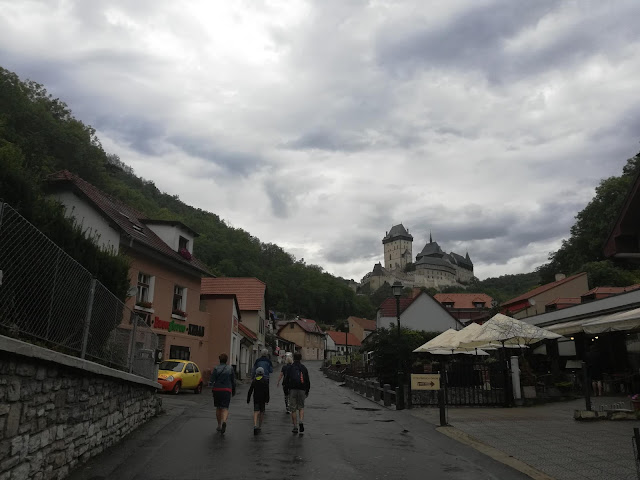 Pretty sure I've already described visiting Karlstejn so no need to do that again. It was nice to see it under a more interesting sky this time, and it seemed like a good place to take a visiting seminar speaker on the weekend. 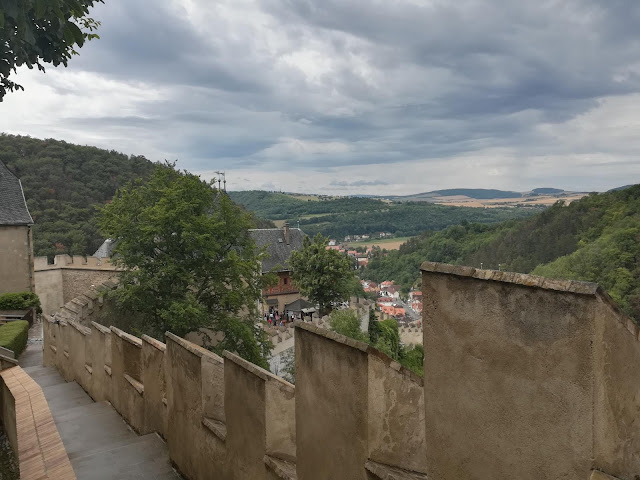 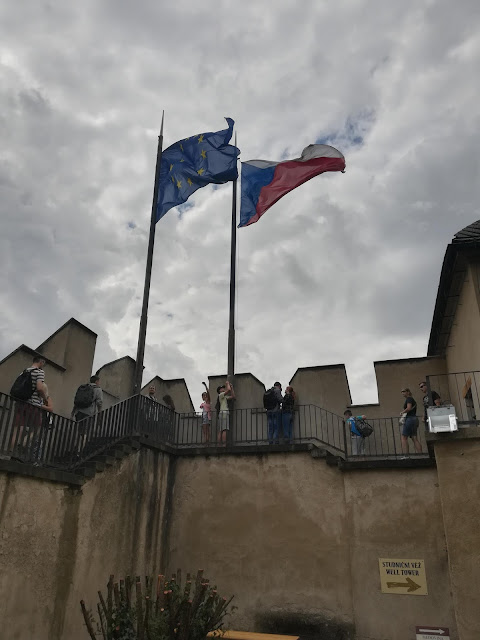 I should say that this year June was ferociously hot (up to 36 C) while July and August have been much cooler (generally not above 27 C, and even dipping down to 11 C on some nights). That's completely the wrong way round from normal, not that I'm complaining. The day before had been one of the hotter days, so the overnight drop had us convinced we'd picked a better day for it.

The guided tour of the castle takes a bit less than an hour, so after that we planned to visit a place called Velká Amerika (Big America, even though it's quite a lot smaller than the real America, but there's also a Little America and I think a Little Mexico). Getting to this abandoned quarry is fair walk from Karlstejn, though there are only one or two steep parts. The weather, however, got steadily angrier that a bunch of astronomers dared encroach the fields of wheat, even though none of us felt inclined to run through them in case that upset Theresa May. 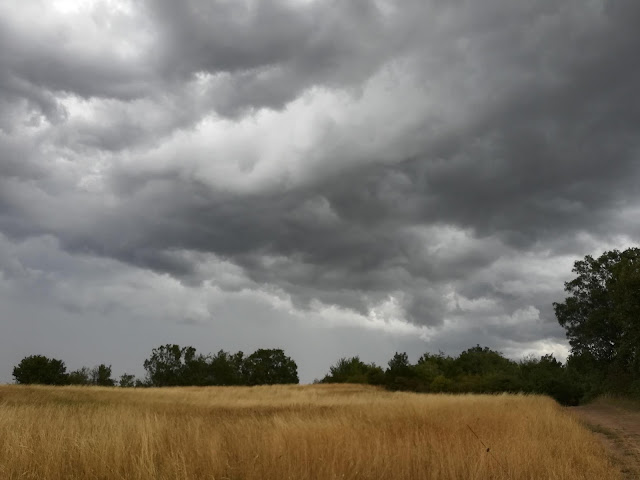 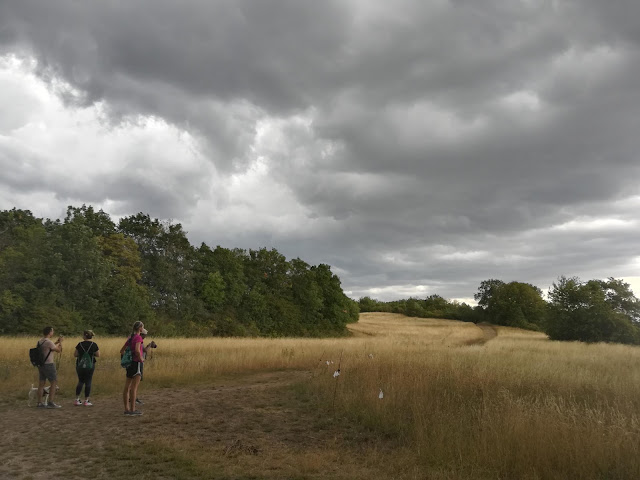 Such skies are typically found on the covers of metal albums so we decided to form a band. Our first album we be called Core Collapse Supernova. It will feature such tracks as :


And so on. We made really stupid band photos of us posing dramatically, but unfortunately I don't have any of those. Ah well.

The weather continued to ramp up the drama : 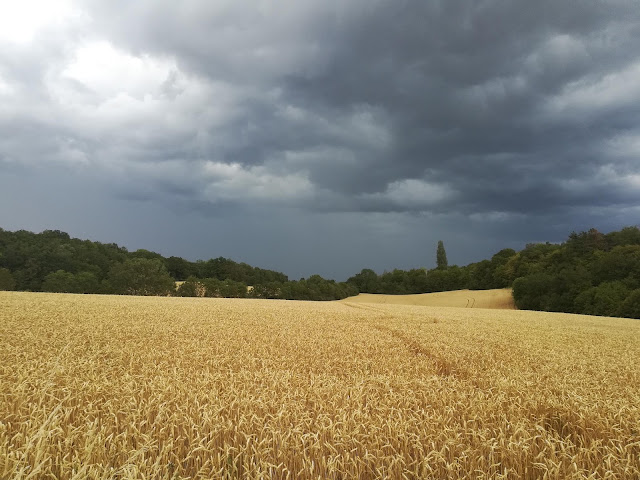 But by the time we got to the quarries the sky looked less like the fury of the gods was about to wax forth. We got some very nice views, for a few minutes. 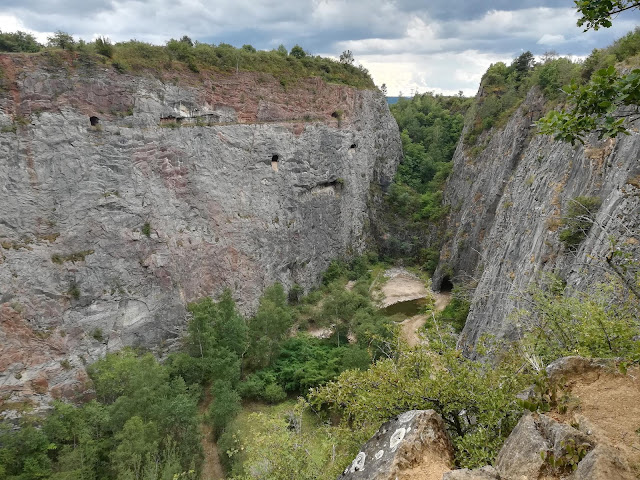 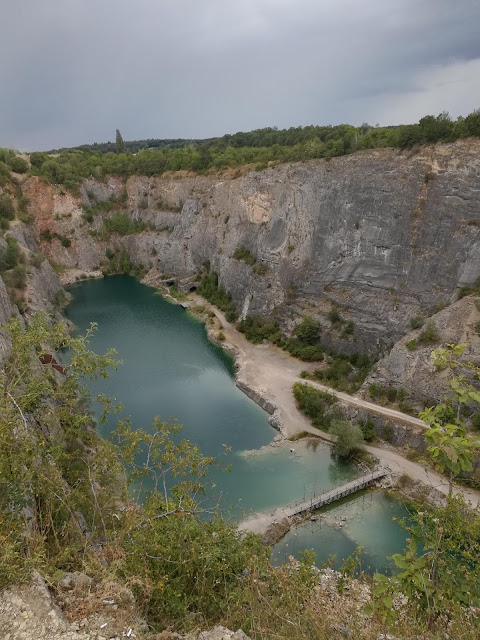 There are really serious levels of edge involved here. One false move and you won't be making a second false move. It's a sheer vertical drop of 100 metres, no handrail, no ledges, just down. 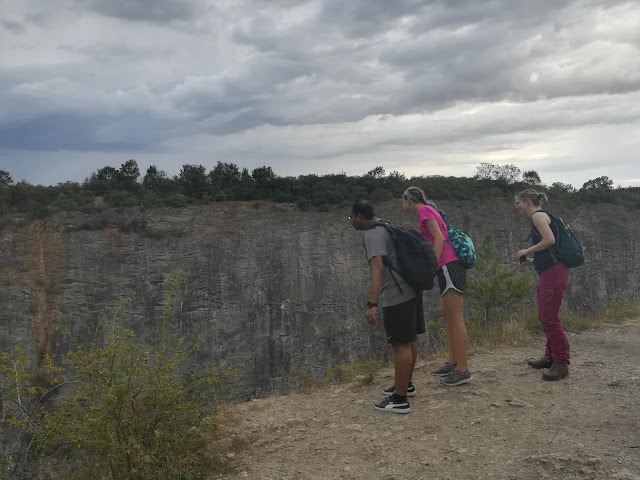 Fortunately this trip didn't become the first time we'd lost a visiting speaker. But then the sky decided that we'd seen enough and it started to rain. The path along the edge is not especially wide, so we bid a hasty retreat. This was a wise move. For a little while it was bearable underneath a small umbrella, but then the gods decided that everyone needed a good hard smiting. Thunder boomed. Lightning flashed. And the sky emptied.

We carried on as far as we could, but then we reached a steep, muddy descent. It didn't seem like a good idea to try and go down while the sky was exploding, so we didn't. There was nowhere to shelter, so we didn't do that either. We simply stood there, getting wet. Pretty soon we were all soaked through and somewhat chilly. Eventually the rain decreased to the point where standing still in the cold heavy rain was marginally less appealing than walking down a steep muddy slope in the rain, so we did that. Very slowly. Everyone survived, albeit acquiring various amounts of mud in the process.

Eventually the rain stopped completely and the Sun came out. The water now had nowhere else to go, so it went back the way it came : upwards. 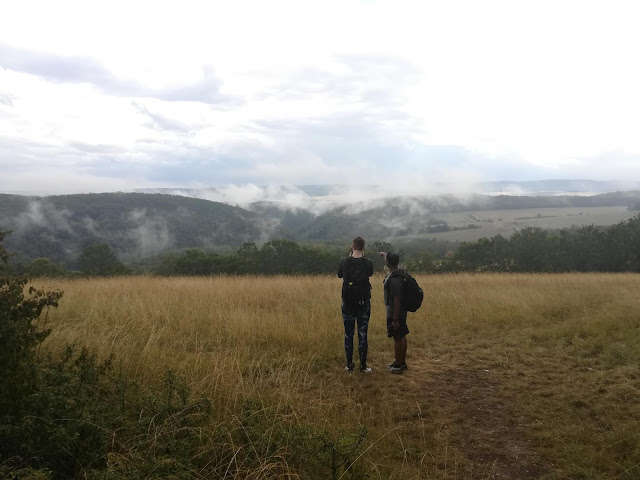 After that we trudged on somewhat grimly back to a three-headed dragon pub, where , still soaked, we had a most welcome and nourishing meal of extremely delicious pancakes. The sunshine continued apologetically. 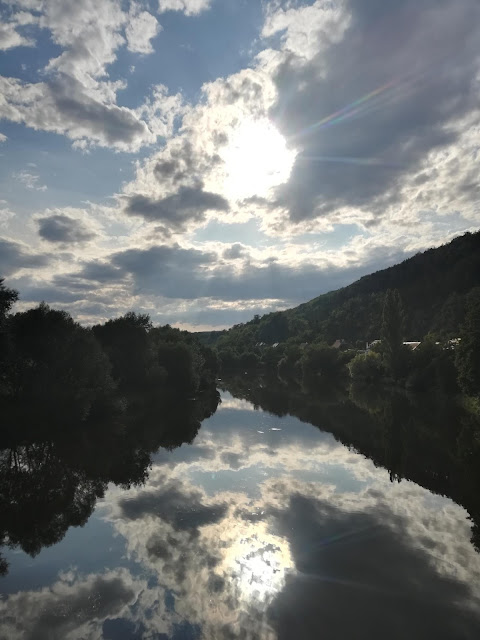 Not that it felt like a very sincere apology, more the sarcastic mocking kind that says, "hah, I'm too weak to dry you off, so I'm going to taunt you instead". The chilly, damp train ride back to Prague was followed not by watching the Zizkov T.V. tower illuminated to commemorate the Moon landing anniversary (I'd seen it before anyway) but with a nice hot bath. And that I can state with certainty was the better choice.
Posted by Rhysy at Thursday, August 08, 2019