So that y'all know where I'm coming from here, let me begin by stating my opinion on previous OS's :

DOS : Hah !
Windows 3.11 : Happy times. Ran for 7 years on a 486 and was so stable that it wouldn't get angry even if you insulted its parentage and called it fat.
Windows XP : Less happy times. Had to reinstall the thing twice in 6 months, losing everything... later, didn't like having a CD writer installed at all, and died soon after. Second computer was OK for a while, then slowly degenerated, like the Black Knight in Monty Python having his limbs cut off one at a time. By the end, there was no taskbar and the search function simply didn't work.


﻿﻿﻿Windows Vista : O Happy Day ! Like XP, but prettier, more stable, yet in defiance of all the odds considerably more annoying. Much like Myleene Klass compared to David Mellor (who is a worthless human being and not even a good DJ yet somehow manages to be marginally less boring than Mrs Klass). Yes, that's right, I'm comparing Classic FM DJ's to Microsoft Windows. OH GOD WHY !﻿﻿﻿
﻿ ﻿Linux : Don't be silly.

So then, 7. Well it follows the long tradition of ever-increasing shininess. Although the new taskbar by default is as ugly as the rotting carcass of a pregnant beluga whale that died from Ebola, thankfully you can make it look just like Vista's very easily. And the Peek function, letting you quickly look at individual windows via the taskbar, is at least vaguely useful.

The new "Themes" feature is lovely, giving you an automatically varying desktop if you so wish. And it comes with some nice images, although the default so disgusting it'll make you vomit with rage before gouging out your own eyes with your toenails. Moreover, the shuffle feature isn't particularly good, often repeating some pictures at the expense of others.
﻿﻿
﻿﻿
Moving on, there have been two huge criticisms of Vista :
1) It has more security alerts than Heathrow
2) It uses so many system resources than it takes the entire power of Canada to open Notepad

Well, (2) is just a lie. Since I spend terrifying amounts of time rendering 3D graphics that max out my system, I can attest to this. Sure, Vista wouldn't be able to cope with 128MB RAM or a poor graphics card as XP can. But come now, it's time to say fare thee well to the Stone Age and move into a realm where we've all gotten over how neat digital watches are. So far as I can tell, 7 is at least slightly better than Vista. Closing down a memory-hogging program is now almost instant, compared with Vista which required at least 6 months notice and a letter tattooed on your own scalp delivered to the head of the World Bank.

(1) however, is massively improved. Although they are still numerous, no longer is it necessary for Windoze to force you to drop whatever else you're doing to press "Yes" 19 thousand times in order to close Paint. Gone is the bizarre, hugely retarded screen dimming that stopped you from clicking anything other than yes or no. At last Microsoft have realised that in the worst-case scenario, your computer might catch a nasty virus but it isn't likely to go running amok on a killing spree. Unless you see the following :
﻿

What else ? Well, gadgets are a lot more stable than in Vista, which had the peculiar habit of re-arranging them very badly and at random intervals. You can also see the progress of downloads in the taskbar directly, rather than needing to open the window, which is nice. Also, you can access some program options directly from the Start Menu (such as, ooh I don't know, starting I.E. in InPrivate mode, although I've yet to find a use for this myself, you understand).  And it shuts down in 15 seconds.

That's the good stuff. But, inevitably, Microsoft is not all "smiles und sunshine". Possibly the biggest annoyance is its use of Libraries. These are just folders with built-in links to other folders, so you don't have to have all your sound files in one place. Now that's actually quite a neat idea, and if you've saving in a Library folder then the default puts it in a sensible place so you can easily find it through the file browser. But it would have been nice to have the option to go straight to the default folder - you're somewhat forced to use the library system.

The main problem is that libraries are regenerated practically every time you open one. And with 800 tracks (which isn't even that many), this takes an annoyingly long time. This is daft. It shouldn't take a computer any time at all to deal with organizing a mere few hundred files. What are quad cores for ? Surely it should really store the library index as a file somewhere that becomes updated periodically, like when people add or change a file in one of its directories, or if a refresh is requested manually. Then there'd be no waiting at all. If you do take the trouble to navigate to the folder directly, you'll find it's very much faster.

A similar problem affects Windows Live Mail, at least if you're using it with gmail. It's nice that what you do to your Live Mail controls your actual gmail account. It's less nice that this can take a life-age of the Earth to accomplish.
﻿
﻿
* Why are all these blog entries becoming so gratuitously exploitative ? I promise there'll be no more of this in the next post.**

Then there are the small but weird features. Sound Recorder can't play back recordings; you have to open them in something else (???). The wi-fi strength shown in the taskbar can differ considerably from what it may indicate in the full window, which is just odd. Minimising WMP12 doesn't give you the same nice functionality in the taskbar that WMP11 did, a foolish oversight.

Two final points. Live Search. Can we please stop this madness now before it's too late ? Stop bloody searching before I've finished typing ! It feels like I'm being interrupted. It's downright rude ! It always leaves me with the distinct impression that if I stop or delete anything it's just going to ignore me. I hate it. Bring back XP's search assistants - they might have been daft, but, like Roger Moore's James Bond, they got the job done.
﻿﻿ 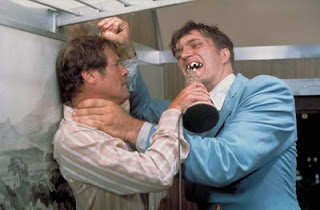 ﻿﻿﻿
Secondly, I want multiple workstations. This is Linux's sole good trick, but it's a very good one. And since Linux is open source, just copy the stoopid code already. Who's gonna sue ? The OS community wouldn't last 20 minutes against Microsoft's highly skilled hordes of Barbarian Attack Lawyers.
﻿

So that's basically that. It is, quite simply, better than other versions of Windows. Really the only reason not to get it is if your computer is struggling to keep up with an abacus. Of course, no-one can yet attest to its long-term stability, but if it's as nice as Vista then things are promising. The real question is : if it were a Classic FM DJ, who would it be ?
Posted by Rhysy at Monday, September 27, 2010