I'm Living in a Plague House 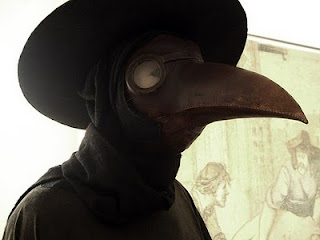 There is no other explanation. I'm not generally an ill person. Normally, I might get a few colds per year. And no, I don't mean man-flu, which I'm convinced is no more than an elaborate ploy by ultra-extremist feminists* to gain some small amount of publicity by annoying the Daily Mail. I mean actual colds, which can be effectively and thoroughly treated with no more than a packet of tissues and, if need be, several tonnes of Lemsip and lots of fluffy pillows.

*Technically I suppose this is impossible. You can't be an extremist when all you aspire to is equality. But you know what I mean.

But in the last 6 months I've had no less than 3 illnesses which have involved me egesting such a prolific quantity of my innards that I might as well take up a course in home plastering, or, more lucratively, get an apprenticeship to Jackson Pollock**. And I'm writing this in the quite justified fear of catching a 4th, which has today struck down my luckless father - to such an extent that we called an emergency doctor.
EDIT : Fortunately, this turns out to be a case of non-infectious blood poisoning. Unfortunately, this means it's a case of blood poisoning.

**Except that this is impossible, because he is dead. I did not previously know this.

First, there was what seemed to have been a norovirus, best described as the flu with the added attraction of continuous puking both ends. That caused me 2 days off uni, oh what a terrible shame. Then, there was what I assume to have been another norovirus, costing me £30 as I had to rebook my theory test. Following a cold, a puking virus which also made me feel as though I'd run a marathon, causing me to miss a driving lesson a week before my practical test.

Perhaps this relates to the liberal applications of Stress Factor 12,000 I've been experiencing over the last few months. This is a lot like Max Factor but with less Max and more Stress, and also completely different in every other way. Sadly, this apparently simple explanation quite fails to explain why everyone around me is also dropping like flies. "Everyone" is not even necessarily limited to humans, with one of the dogs having what can only be described as dysentery.

Nor can it be because of my hedonistic wild partying. Hangovers aren't infectious, and in any case I haven't exactly left the house much anyway. I've been too busy sorting through 20 years of accumulated crap, an ongoing process that will probably endure through the next ice age or even the next Ice Age movie.

Now it's nothing short of madness to suggest that this spate of illnesses could be entirely due to coincidence. So there must be a logical, rational explanation for why people start chunking*** every other week or so. What can this be ? I reckon I probably disturbed an ancient Indian burial ground. But I'm still in Wales. Logically, this must mean the curse is travelling back through time for my disturbing an ancient Indian burial ground at some unknown point in the future. Makes sense.

***I'm aware that "chucking" would be the more usual expression. That's not a typo.
Posted by Rhysy at Wednesday, October 20, 2010