Let's start with the obvious : They cancelled Atlantis for this ?!? Small wonder MGM are in administration.

It appears to be a case of "let's ride the Battlestar Galactica bandwagon so hard the wheels explode". Given that BSG came up with "The Plan", this is patently unnecessary. Sure, BSG itself was fantastic. It was full of imperfect characters, political commentary, weird mystical elements no-one understands, and gratuitous typecasting. It was seldom, if ever, funny, and was perhaps even less of a sci-fi than Firefly. All of which mean that imitating the same thing in the world of Stargate, in many ways its polar opposite, is bloody daft.

Things didn't start well from the word go, with the first episode being done in a Lost-esque fashion (i.e. nothing but pointless flashbacks). It reminded me of Olive Stone's Alexander, a film which similarly seemed to have had a nasty accident with a fan in the cutting room. Mercifully, subsequent episodes didn't follow this ridiculous non-linearity.

Not that this helped much. Sure, the show is full of imperfect characters trapped in a mostly hopeless situation, just like BSG. Unfortunately, unlike BSG, virtually all of them have the riveting personalities of... well, rivets. The comic genius of Colonel O'Neil and Dr McKay has been replaced by the introspective moping of a bunch of cretinous teenage cretins who spend far more time complaining about the food than exploring a gigantic alien spaceship. Even so, you'd think that it should be at least reasonably interesting to see them trapped millions of light years away from home.

It isn't. Most episodes in Season 1 were set on Earth. In a spectacular, "we've missed our own point" move, the show's designers wrote in communication stones that let the crew swap souls with people back on Earth in order to communicate (hmm, soul swappers is a much better name, someone should tell them this). Besides being bloody daft, it turns out that everything the crew do back on Earth is criminally boring. Most of the time the show was on the verge of being "Coronation Street, but very occasionally, in space". Which isn't nearly as interesting as it sounds.

After milling about for a while, doing nothing anyone would ever care about, about halfway through Season 1* we find out that the ship is powered by flying through stars. And that's cool - it's a neat, properly sci-fi concept. Unfortunately it appears that this was only a fleeting moment of inspiration,  since the following episodes only descended further into the "Neighbours" level of talent of scriptwriting.

*Halfway through the first half, anyway. Sorry, but a "mid-season break" of 3-4 months cannot be called a break. It's a sabbatical.

Things did eventually pick up. The characters, script, acting... none of these improved in the slightest. But the plots did. Stuff actually happened. Alas this is offset but the tendency to put, at the end of each episode, a 4 minute long song so cheesy that its mind-liquefying potential could be compared to the Ebola virus. I hesitate to say it, but even the Enterprise theme tune has greater musical merit than some of Universe's selections.

Almost as bad are the plot holes wide enough to sink the Lusitania. For instance, a time-travel episode apparently saw most of the cast killed, but next week they were all tickety-boo. Presumably, everything rest itself but with little exposition as to how. A few weeks later, some aliens attacked. "There's no point trying to communicate," says chief science dude Robert Carlyle, "they can't possibly understand English."
﻿ 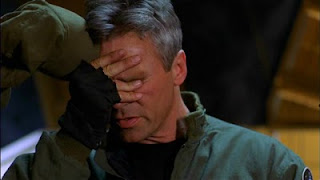 ﻿
What the... ? Did you just forget the last 15 seasons of Stargate ? Every single week they'd find a new lost tribe or actual bona fide aliens, every single one of which spoke (but for some reason never wrote in) perfect English. Everyone speaks English in Stargate land. It's been a time-saving principle of the show ever since the end of the movie. Just because one of the main premises of your show is fairly ludicrous doesn't mean you can just abandon it. That'd be like remaking Star Trek but without warp drive.
﻿

One week, some of the crew get stuck on a planet with a buried Stargate. With limited time until the ship automatically leaves without them, and the gate buried in solid rock, what could possibly be the solution ?That's right... C4 ! Stargate's explosive of choice since time immemorial. Miraculously leaving the gate not only unharmed, which is believable, but also standing perfectly upright, which is not.

But the piece de resistance ? Undoubtedly this occurs at the start of season 2. The formely rather hot medic has been pregnant for some time and is now about to burst at any moment. Hmm, this could be a problem. How to avoid bringing up a baby in a dilapidated starship with no doctors and oh so many other interesting things going on all the time in this action-packed show ? Simple, have it abducted by friendly planet-building aliens.
﻿﻿
﻿
It doesn't end there. To everyone else, it appears that the baby has been lost. So has it been abducted or was it all in her head ? No, it's really been abducted, because the aliens have given her a prescient vision of a nebula which is encountered shortly after. But if that's true, then there shouldn't be a teeny tiny baby corpse in the ship's sick bay. Is there ? I don't know. This rather obvious question is simply ignored.

Which leaves me wondering as to why I'm still watching. Well, if they'd continued with what could laughably be called the Earth-based "stories", then I certainly wouldn't be. Nor am I shallow enough to watch it for the small assortment of fairly attractive members of the opposite sex. No, the reason is quite simple : there's nothing else on.