What is it I actually do all day ?

Many people have asked me this. Not very many, but a few. OK, about 5. After all, I'm still stuck here, devoid of license and income, and I can't spent every minute learning to drive, or even viewing pornography. Letting either activity consumes one's entire day tends to cause unpleasant consequences for all concerned. Still, you might think that now would be the ideal time to complete all those things I never have time for : a host of CGI projects, learning Spanish, writing papers, playing computer games until blue in the face, etc.

Not so. Well, not quite anyway. For this house contains not one but two terrors of apocalyptic proportions, which each day must be tamed lest they should escape to bring about Ragnarok : the End of Days. The first such monster is familiar to many - a 1 year old baby. This malevolent creature is best thought of as a hybrid basilisk-banshee, capable of turning its enemies to stone by screaming at them. Or, in fairness, more often by laughing at them : so now we have a hybrid basilisk-banshee-hyena.

﻿It is also known as a creature of great destructive potential, a reputation well earned. Each day it wreaks its path of tornado-like destruction, and no-one on Earth is capable of stopping it because the damn thing is laughing and looking adorable. Perhaps if Stalin had done that, communism would have lasted longer. We'll never know.

And thus each day requires me to re-adjust the entropy of the living room to manageable levels, because there are injured parents hobbling around the place who might step on things. This has at least taught me the Ultimate Fate of the Universe : the heat death will be caused by babies. Infants truly are the living embodiment of the Second Law of Thermodynamics. 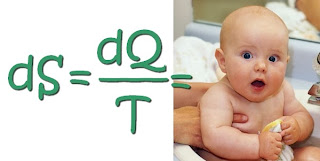 Logically this means that if we combine a basilisk, a banshee and a hyena we will also get a dramatic increase in entropy. This is self-evidently true. I rest my case.

However, the second little Horseman of the Apocalypse is a far more sinister and bewildering character familiar to far fewer people, except perhaps readers of the excellent Sheldon webcomic. I speak of pugs. PUGS ! An animal whose very name should inspire terror in the hearts of millions, but doesn't. To non pug-owners, a pug is just a small, very ugly lapdog, the kind you wouldn't like to see first thing in the morning with a hangover. The reality is not as pleasant.

Like Tamerlane, they are best described as the Scourge of God and the Terror of the World, leaving a bloody trail of enemies in their wake and towers of skulls atop fields of barely planted over the ruined cities of their enemies. You think I'm exaggerating, but if Tamerlane had had a squad of attack pugs he'd have conquered the planet. Fortunately, training even a single pug is by definition impossible.
﻿﻿
﻿Therein lies their greatest strength as an adversary : their truly heroic level of stupidity. The pug is a denizen of this mortal coil with zero memory and less intelligence, and as such exists in a constant state of mad surprise. They are the only known creature in the Universe to have developed a limited - but powerful - form of mind control by virtue their sheer lack of brain power.

Here's how it works. A normal dog understands basic concepts like its own existence, size, and the fact that it is an independent entity acting under its own volition. A pug's brain is made of cheese so cannot comprehend any of this. So whereas a normal dog will run around happily avoiding obstacles like fallen logs, other dogs and large buildings, a pug won't. If faced with the choice to go under or over a log, a pug's brain literally melts with effort and the wretched creature attempts to employ quantum mechanics by running at high speed to try and phase through the log instead. This invariably fails.


﻿Real dogs have some level of trial-and-error intelligence. Not so the diminutive pug; the animal will insist on trying the same thing over and over again, be it barking at a light breeze, running into logs,  sporadically attacking people's feet, or humping everything in sight*. This is a level of stupidity so high that every other animal is soon baffled into confused submission, including other dogs like dobermans (I wish that was an exaggeration for comic effect, but it really isn't). The brains of higher animals like humans are similarly unable to accept the level of sheer idiocy displayed by pugs, and usually quickly give up and wish they'd got a cat instead.

* It's worse than it sounds. Female pugs will often hump their own mothers, so it would not be far wrong to describe a pug as an incestuous lesbian serial rapist. Just don't tell the Daily Mail, they'd have a field day.

The pug is also blessed with two further weapons which make life with four of them at best interesting. Firstly, they are the only known animal able to extract energy directly from the quantum vacuum. This makes them nearly unstoppable, which wouldn't be so bad if they actually had any clue what they wanted, where they were or the fact that walls are solid. Their second, messier weapon, which has a greater impact on my day, is their excessive poop. To the point where "excessive" means "violating the conservation of mass principle".

Having saved the world from the baby/pug apocalypse every day, this leaves some time for various other mundane chores which injured parents cannot cope with. Once these are done there may or may not be some driving involved. That gives me about 2 hours wherein nothing much happens. And then it's time to walk the other, more normal dog, and then the 1-year old returns from nursery and re-embarks on his endless quest to cause the Heat Death of the living room and the whole sorry cycle resumes again.
Posted by Rhysy at Wednesday, January 26, 2011