Why can't coalitions be democratic ?

EDIT : Apparently, I'm a few months too late writing this. I don't see how. This is as much a response to the Lib Dem's failure to honour election promises as it is to the election itself. As for not being taken seriously - eh ? No me comprehende. This isn't Question Time. It's just a random blog with a silly banner, what on earth would suggest a serious political discussion would lie within ?


Yes, it's another post about politics - but this time with no analogies to film franchises, I promise. No, this one actually has a point besides mockery to it, but will likely contain more lolcats and cleavage than most political articles.

No-one voted for our current government. It is true that Labour lost, but it is equally true that the Tories didn't win, and the Liberal Democrats... well, they turned up. And it's also true that Labour couldn't have formed any kind of government without a bizarre and wholly unworkable "rainbow coalition", a term that conjours images of Zippy, George and Bungle fighting for Greenpeace.

Yet this does not change the simple fact that we have a government we didn't vote for. It's possible that's exactly what the people of Britain wanted, but since there was no option for it on the ballot paper, we'll never know, will we ? Now if you have no control over who's in government, I submit this is not democracy at all. It is laughable. It's even more absurd than the time Jordan decided to run for MP, with the single policy of "free cosmetic surgery for all" (err, yeah, because that one worked out so well).
﻿
﻿
However, my point is that at least in this case voters (read as "morons") knew what they were getting. Boobs. Really, really big boobs. Completely ineffective at politics, but the point remains. This government has taken a far more creative approach - you can vote for parties with time-honoured, cherished principles, and they won't implement them at all (or even do the exact opposite, presumably just to confuse us all for the next election* - like voting for Jordan but getting Keira Knightley).  Thus, a rational observer must conclude that a vote for Jordan would have been a more democratic and honest vote than a vote for many of the members of our current government. This is a fact so preposterous that it demands rectification at any cost. Even to the point of blogging about it.

* Very recently Clegg accused voters of  re-writing history on the subject of his pledge not to raise tuition fees. A witty retort to this is too easy, so I'll settle for telling him to shut his stupid fat ugly pie-hole before his brain escapes.
﻿
﻿
To their credit the Lib Dems have championed voting reformed since ages past and are trying to implement this as best they can. But everyone appears to be missing a fundamental point : no-one votes for coalitions. My question is simply : why the hell not ? If no party can form a majority government, should not the electorate have the right to choose who sides with whom to win power ?

Of course, politics is a very complicated thing and replacing our voting system with the alternative vote or single transferable vote isn't going to make things any simpler. Nor will it change the basic problem of what to do if no party wins outright, and indeed most analysts think that AV or STV would make such an outcome more likely. Given that not only are current government policies as hugely retarded as Russel Grant, and even less popular, but also that we as a country just can't cope with the concept of coalitions, how this possibly improve matters in the future ?
﻿
﻿﻿
It can't. But there is one very simple way that we can at least give a coalition government a mandate to govern : have an option to choose which coalition we want in power. Bugger the debate about proportional representation - all I really want is to decide which government we get. The results of the last election really only allowed one possible coalition, but it's perfectly possible to have a situation where this is not so.

In this case, politicians should be compelled to join forces according to whichever coalition received the most votes (they might not like it, but there's nothing wrong with making politicians suffer). This need only entail a single extra box on the ballot paper for the voter to choose which party should be the partner with their main choice in the event of a hung parliament. It does however open up a whole new can of worms : what if people really want, say, a Labour-Lib Dem coalition but only a Tory-Lib Dem coalition is feasible ? This could happen if the Labour was everyone's coalition choice but not their main vote.

In this case it's tough on us. You can't have your cake and eat it : if you want a coalition between 2 parties, then by jingo you'd better vote for those parties. Furthermore, we've seen the ridiculous prospect of a rainbow coalition against the largest party in the Welsh Assembly, something which is just confusing and weird, like that bit in Jurassic Park 2 where everyone on the boat has been eaten but the only dinosaurs on board are safely locked away.

﻿﻿
No, the larger parties must get priority. Coalitions should only be allowed between two parties, otherwise things get daft and we might as well go back to voting for tits again (or Zippy, George and Bungle if you prefer, I'm not judging). And this will only work at all provided politicians agree to answer perfectly valid questions about what they'd do in a coalition, unlike last time. I envisage the results of an election being something like this :

If all the Tory and Labour voters chose Lib Dems as coalition partners, then we'd have a Tory-Lib Dem government because the Tories are larger, no matter what the Labour voters want. But, if the Tory voters were divided on a choice of ally, then a Labour-Lib Dem coalition could form a majority government.

It might seem that the results of the last election couldn't have been prevented : even if no-one wanted the coalition, it's the only combination that produces a viable majority. However, if people had voted
a) knowing there could be a coalition and that
b) they could choose which one and
c) having been told what each possible coalition would do*
then perhaps they wouldn't have voted in quite the same way. And though no voting system is perfect, surely we at least have the right to decide who's in charge of running the country.

* Sure, politicians often say they'll do one thing and then do another. But at the last election then went several steps further. They refused to even answer questions about what they'd do in "hypothetical situations", then subsequently used this to justify u-turns so laughable it's not even funny.

Of course, one can imagine more elaborate voting procedures where we could somehow vote for a coalition directly. Personally I wanted a Labour-Lib Dem coalition rather than a majority Labour government. This would be lovely, but I fear a voting procedure so convoluted that the only people who'd have the time to work it all out would be old people. And they'd all vote Tory anyway, the rotters. For as the old saying goes : 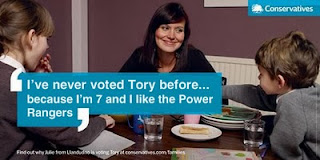