How Lord of the Rings Can Help Solve China's Population Crisis

It's a simple question so I'll get right to it. Elves are immortal and apparently reproduce in the same way that humans do, so why aren't they crammed into Middle Earth like sardines ? Clearly they all get along with each other without reproducing much, so I reckon that if we figure out how they do it we'll be well on the way to finding a solution for China's population problem. Plus, we'll be able to stop worrying about what will happen when someone invents a cure for ageing.

You might wonder why elves have been singled out here. What about Middle Earth's other long-lived races ? 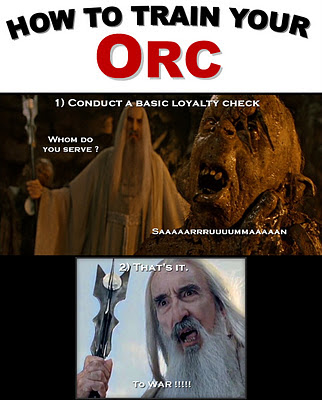 Which means that the options for the survival of a long-lived species boil down to massacring an entire gender, ludicrous facial hair, killing all but 5 of the populace, or becoming Nazis. Well, let's put those on the "maybe" pile, and hope the Elves have a better solution. They must have come up with something... right ?

Perhaps the most obvious explanation is that the elf birth rate exactly matches the elf death rate. Now elven medicine is a tad mysterious but apparently very effective, so we can safely assume very low infant mortality. Which means that each elf couple will produce at least 1 child per year. That means that 1 in 2 elves must die each year to balance it out. Clearly this is preposterous, especially since elves can live to be over 3,000 years old. But at that death rate, any one elf only has a 1 in 1x10^903 chance of living that long, so their initial population must have been many orders of magnitude larger than the number of atoms in the Universe.

However, this explanation lacks credibility, because none of the elves seem remotely interesting enough to ever have had a hidden life as a sex fiend. Maybe, instead, they have some incredibly effective method of contraception, and only procreate when their population diminishes. But that doesn't seem to likely either, because Liv Tyler (unaware of Aragorn's fascist tenancies) seemed pretty eager to get on with making babies.

Which means we're left with a long-lived population of more or less stable, well-adjusted (if extremely ponsey) people who want to have children, but don't. Only one explanation remains - Elves are reverse tribbles. Instead of being born pregnant, they're almost all born sterile. No wonder Liv Tyler was so keen to turn in her sword for innumerable evening's spent watching Ben and Holly (which in Middle Earth is probably considered a documentary).