On the Purchase of a Horseless Carriage

I have several lifelong ambitions. These include, but are not necessarily limited to :
Unfortunately my other plan, namely to emulate the great Sir David Attenborough - who never passed his driving test and consequently doesn't own a car - is about to fail. It might theoretically be possible for me to continue car pooling for another year, but it would be considerably more difficult than, say, getting a horse.

This idea is not without merit. For one thing, it would mean having to set up the world's first Observatory stables - add that one to the list. It would also mean an 8-mile ride every day, or 20 miles on weekends (the Observatory doesn't have a supermarket), and horses don't come with air conditioning or a roof. I suppose I could attach a carriage and ride in that, but then I'd have to get a driver so I could sit in the shady, rain-proof interior (and presumably shout things like, "To the Observatory, James*, and don't spare the whip !").

* The attentive reader will see the difficulty at once. Puerto Ricans aren't called James.


An alternative scheme, which would do away for the need for a separate carriage and kill two birds with one stone - would be to ride atop an elephant. Unlike horses, elephants are large enough to be fitted with a small roof and probably a little a.c. unit, although I'm not aware if anyone has tried. Plus they can knock stuff over. But they also poop a lot and probably need to be fed and stuff. 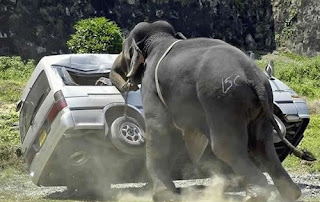 So that's that plan scuppered. With characteristic cowardly capitulation I've caved in and contrived to contribute capital to acquire a car (today's blog is brought to you by the letter C !).  Now my first choice would have been the smallest vehicle possible, like a Smart car (yes, minis are way cooler, but they're now as big as every other car which somewhat defeats their purpose). This is counterbalanced by my other need to do as little work as possible - i.e. buy the first thing on offer provided it doesn't spontaneously combust in the presence of trees.

At this point I can now only suppose that reverse karmic retribution is in effect, because the first thing on offer is a large, shiny golden thing with electrically-adjustable seats. It has driven 73,000 miles, or about 3 times around the Earth, since its creation in 2003, and has 4 doors (on this terminology I am in full agreement with the Americans - cars have either 2 or 4 doors, not 3 or 5, that's just silly). And a CD player. Umm. Knowledge of and interest in cars failing at this point. It can go forwards and backwards, but not up or down or back in time. Look ! Here it is... 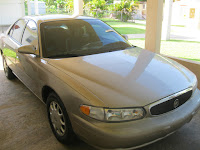 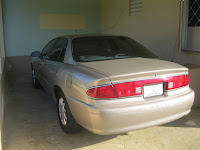 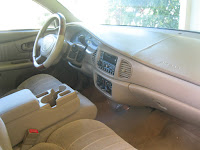