I was extremely lucky in Puerto Rico in that I basically fell into a house recently vacated by another postdoc, bought all her stuff, and lived happily ever after.* It was 10 minutes (drive) from work, had reliable electricity, internet** and - most unusually - water. It was all much simpler than it had any right to be.

* Metaphorically speaking.
** With one unfortunate exception.

Not so, it seems, in Prague. To save money, I opted to share with the even-newer postdoc. An undoubtedly sound economic decision, but one which does make things rather complicated. There's no shortage of places to live, but finding one which ticks all the boxes was damned hard. In the interval, I had to sleep rough on the streets, a.k.a. the very nice guest room at the institute.

Strangely, although the Academy of Sciences owns several apartments, they're not particularly cheap. Nor do they currently offer anywhere particularly suitable for singles. My 50 sq m house was considered tiny and/or cute in Puerto Rico, but having seen the 80 sq m place offered by the Academy, I can't imagine what I'd do with all that space. Set up an animal sanctuary ? A small opium farm, perhaps ? Run a very small brothel ? I think not.

In any case, the place was too far from the city center, and no-one's going to trek that far out to find a brothel. You don't need to. They're really rather unmissable* in the middle of town. Although one presumes such places must have fallen victim to the economic crisis as much as anyone else, since they explicitly advertise the availability of... free wi-fi. Fortunately, there's a meme for that.

* As in, "you can't fail to notice their existence" rather than, "they're the best thing in Prague, you must go at once, take my car !"

But I digress. What was I babbling about ? Oh, right, apartments ! We rejected the Academy's flat, because even a cursory Google search revealed many fully furnished apartments in better locations, for a similar price. But of course, the devil's in the details...

The second place we saw was absolutely great, apart from being on the 4th floor without a lift (5th if your're American). Actually that sounds awful already. There would also have been a furnished kitchen but not much more than that. Someone else - obviously an avid fitness fanatic - took it the next day.

The third place wasn't awful, but was overly-furnished. Converting the living room into a second bedroom would have been quite a bit of work, plus there was no fridge. And the landlady* had a "no parties" policy.

* Who was also the owner of the building. This seems very common in Prague that huge apartment blocks are owned by individuals, who live there, and not giant faceless corporations.

Number 4 was oh so very, very close. Again, lots of room, fully furnished. Owner definitely not one with a thing against parties. But here there was a single fatal flaw : one bedroom could only be accessed by going through another. Awkward !

We visited number 5 while it was still a building site, and talked directly with the owner of the building who was also the head of the construction company. It was gigantic - 96 sq m - and very reasonably priced, but unfurnished. Well, it had an oven, a dishwasher, and a bathroom, but that does not equate to being partrly furnished in my mind. "Oh, I don't have to fit my own shower ? How convenient !" - I think not.

Number 6 was crazy-expensive (price of utility bills isn't always advertised) box a few minutes from the castle. We wouldn't have saved anything by sharing at that price, plus we'd have had far less space each than renting separately. 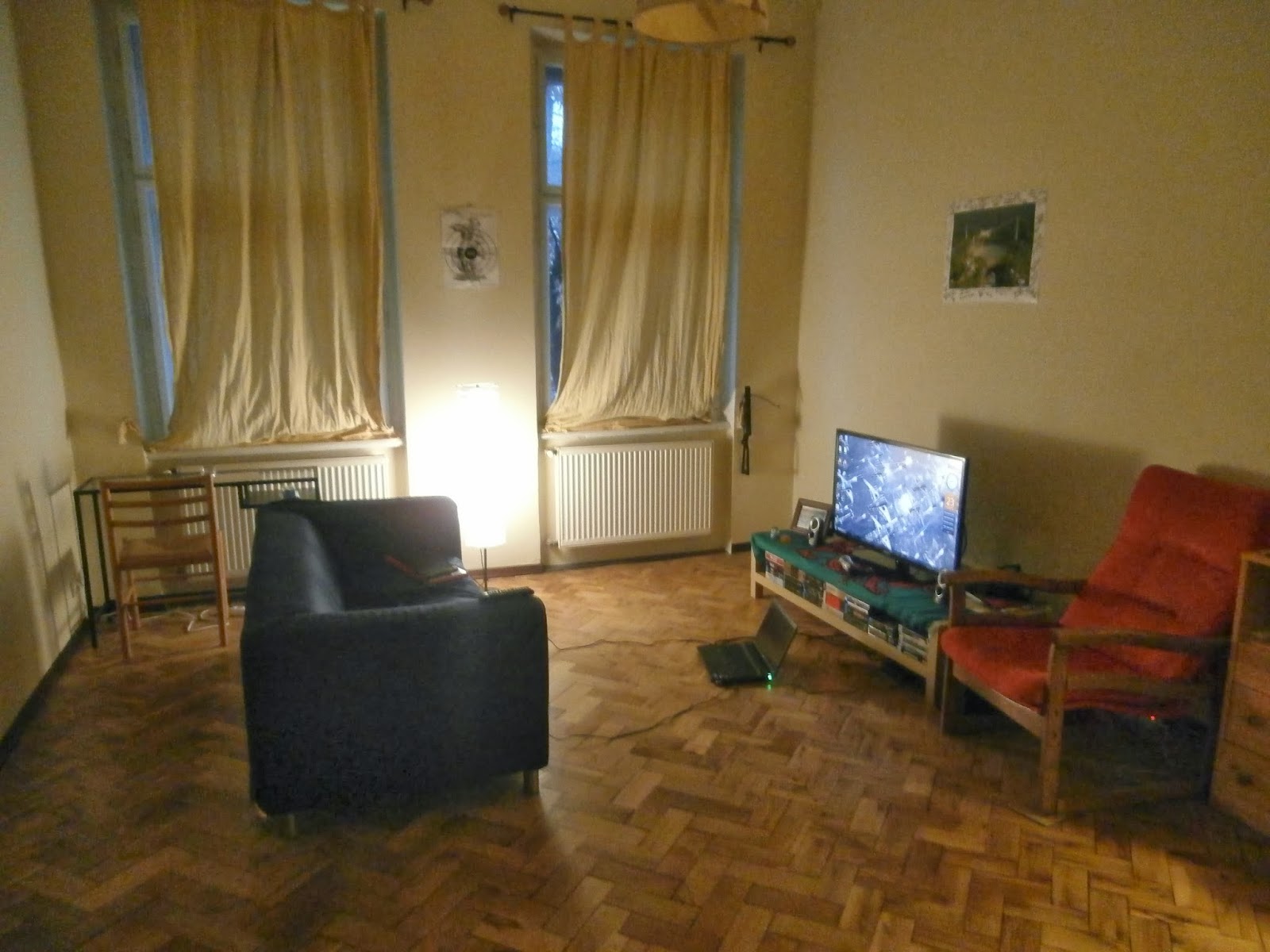 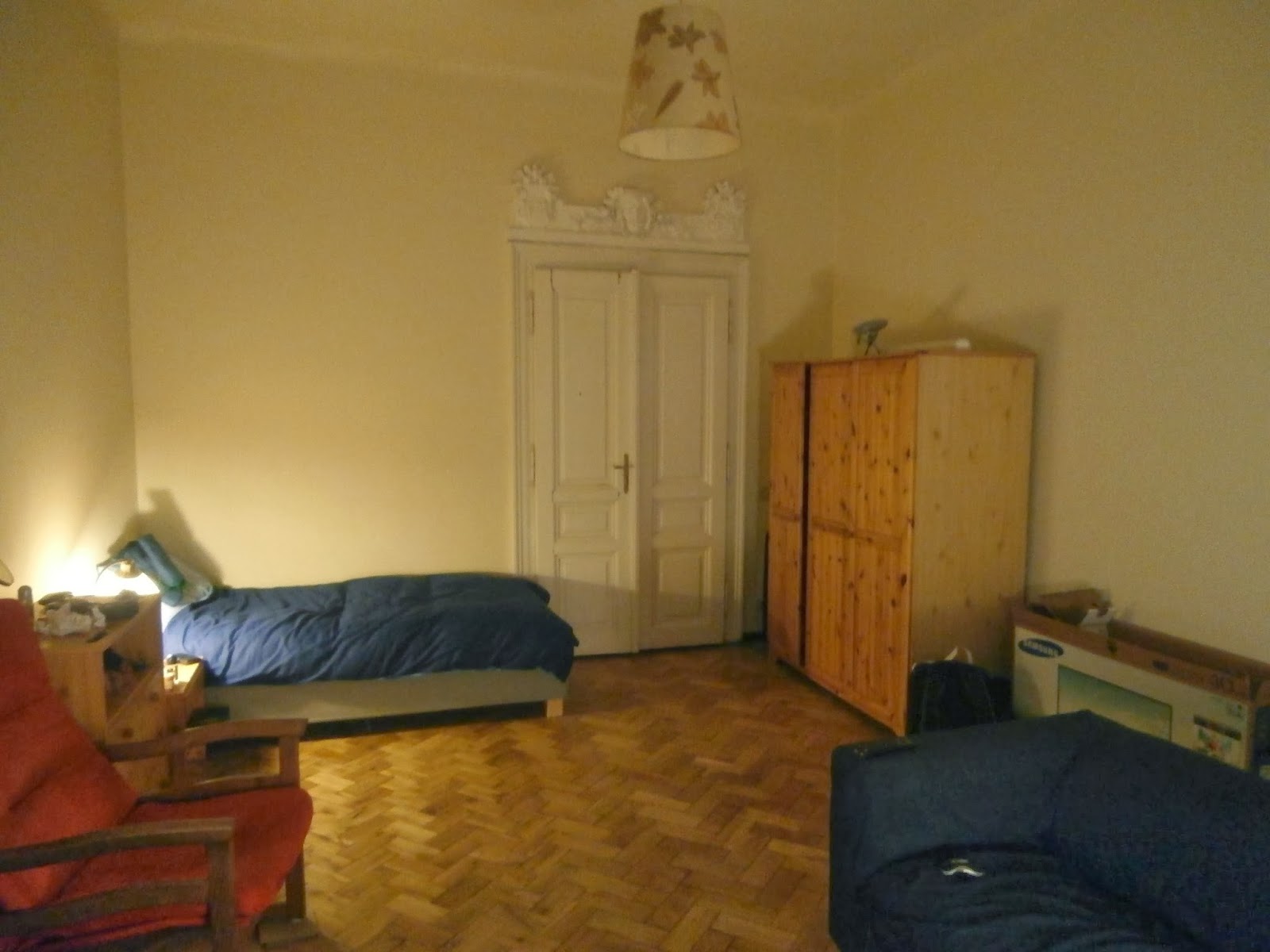 Keen-eyed viewers may spot the Arecibo poster (signed by members of staff) which is given pride of place above the T.V. I still haven't worked out what to do with the amazon gift voucher, although maybe that will be easier now that I have an address. Unfortunately this is not a proper address, because the letterboxes aren't big enough for packages. One day I'll live somewhere so incredibly sophisticated that I can get boxes delivered to my door...

Also on display are my crossbow, hanging on the wall, and Swiss horn, in front of the T.V. I lost most of the ammunition for the crossbow at a pool party, but there's plenty left. The target on the wall comes from Prague Castle. The horn is epic, as we proved during the great Alpine expedition to Skyrim.

The camera is held at a jaunty angle because the mountain is like, reallly steep.

There aren't any mountains on view here. Instead, a small balcony overlooks the utterly non-descript space between the apartment blocks. There's also a kitchen, because kitchens are generally reckoned to be a good thing. 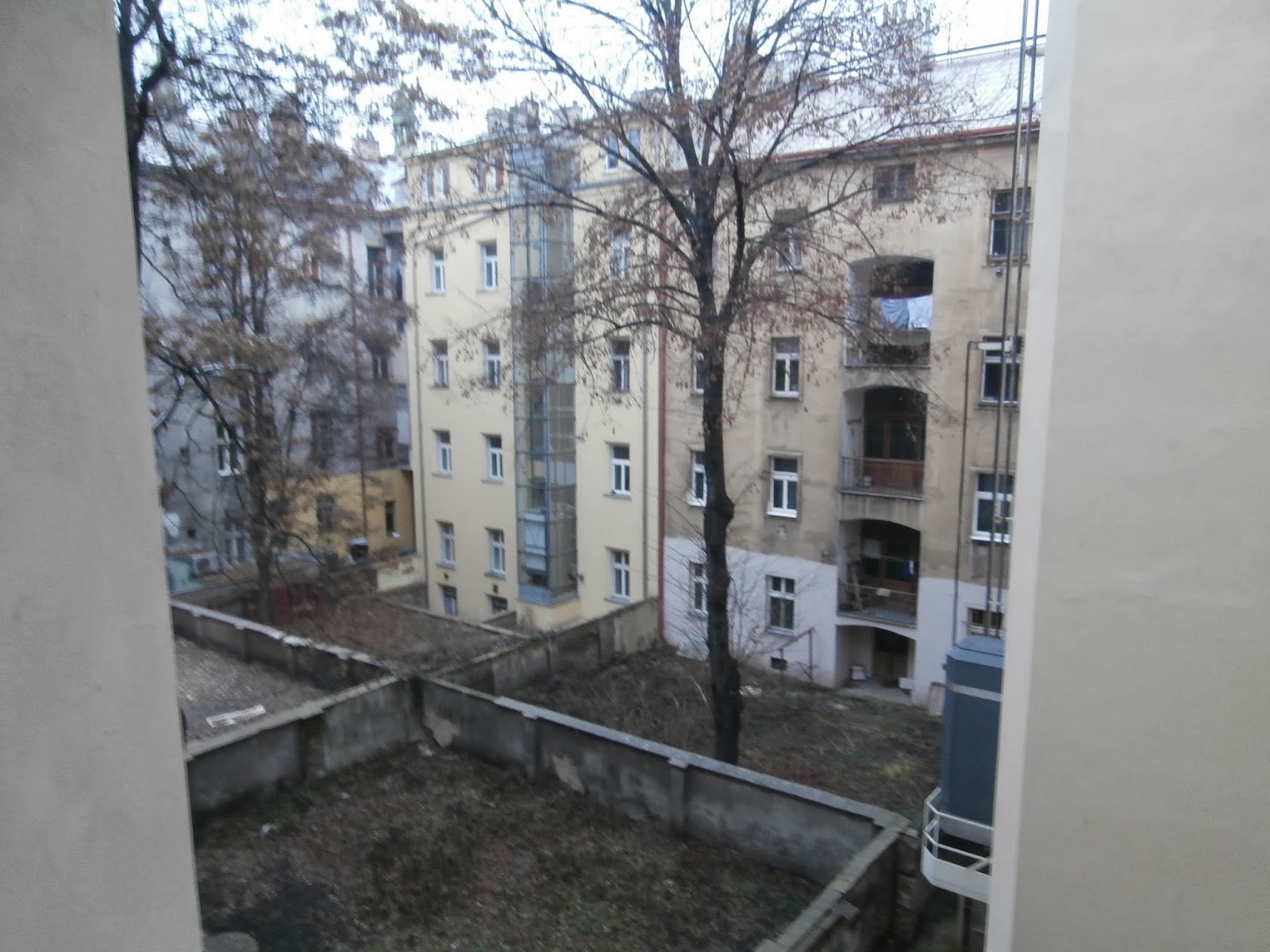 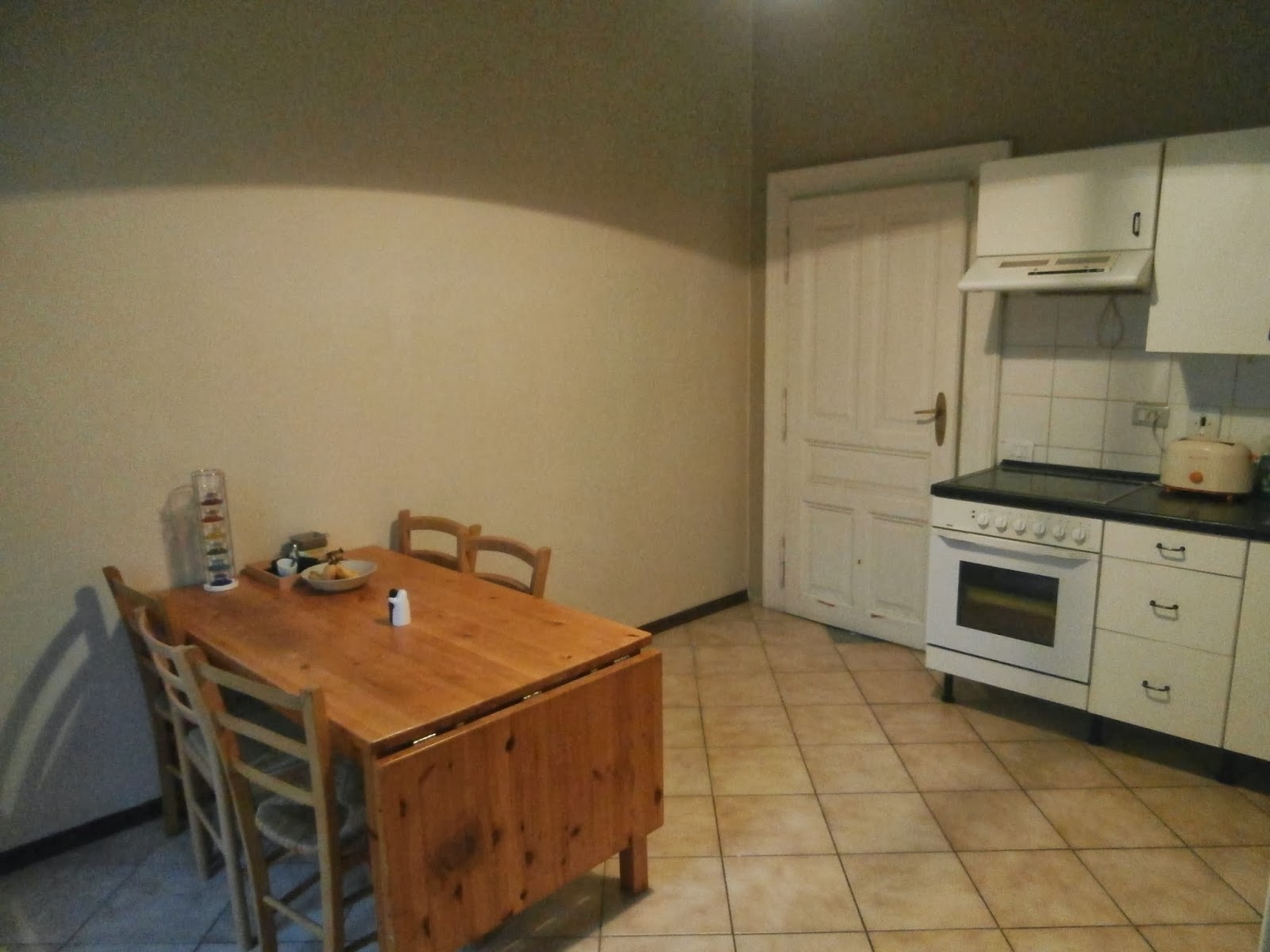 The downsides ? The bathroom is teeny-tiny and there's only a shower. There is only one toilet. The laundry room has only a rather small, extremely slow washing machine, no dryer. But since I'm not living in a sauna any more, the need for showering fifty-seven times a day is less pressing. Nor do I have some weird laundry fetish, so really there's nothing to complain about.

So far the property agency haven't given cause for complaint. The boiler broke on the first weekend, but it was fixed on the following Monday (which is good, because now it's -13 C outside). They found us some extra furniture and might have even more. Internet was installed by O2 within the space of a week. A trip to Tesco restored my British superpower of the ability to make tea (i.e. I bought a kettle), and thus all is well with the world.
Posted by Rhysy at Sunday, January 26, 2014