If I Could Talk To The Aliens...

Whenever someone asks me what I do, I have two standard responses. If I don't feel like talking, I tell them I'm an astrophysicist. Since I spend most of my time cooped up in a small house on my own, I don't use this one very much. My preferred response these days is to say I'm astronomer - which gives slightly less chance that the conversation will screech to a bewildered halt, but still engenders certain risks.

The main occupational hazard is people assuming that this is the same as astrology. Usually, this is because tehy is not to gud wid words. but that's OK. Worse, but much more rarely, they are genuinely unaware of the difference between the two. The most interesting / annoying are the UFO nuts.

That particular crowd are more excitable if I've ventured to say that I'm a radio astronomer, because that implies I must be a real life Jodie Foster despite all evidence to the contrary ("No, we don't use headphones, it's a radio telescope, not a radio....").

Anyway, some radio astronomers really do listen for aliens, something which I think is a jolly good thing because it doesn't cost a lot and could potentially bring about the greatest discovery in human history. So that's fine. But there's a huge chasm between real SETI programs and looking for flying saucers. 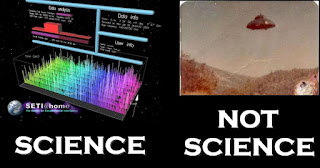 National Geographic - bless their little cotton socks - have decided to do their bit to fuel that particular fire by having us transmit twitter messages into space. That's so bizarre it deserves repeating. The National Geographic channel is going to pay us money to film us transmitting messages from twitter INTO SPACE.

Unfortunately, the most talked about person on twitter is Justin Beiber.

Humanity's first attempt to beam a radio message to aliens was an overly-sophisticated diagram that looked like this :

Which is a very clever way to tell the aliens that we know about prime numbers, chemical elements, have DNA, four limbs and a big radio telescope. In blind tests, no-one could decipher it. So apparently this time we're going to really dumb things down, and tell them all about a weird-looking youth with mad hair instead.

Of course, I shan't be transmitting any messages. Fortunately for me I know nothing about using the radar. More importantly, if I'd wanted to send a message I'd have to have signed up for twitter, and I can think of more useful things to do with my time. Like chopping my arm off, for starters.

Howerver, if I had HAD deigned to do so, you can be damn sure I wouldn't have told the aliens anything about Mr Beiber. Messages I would like to send include :

"I CAN HAS INTERSTELLAR COMMUNICATIONS !"

"I feel it only fair to warn you that all your base are belong to us."

"What did those cows ever do to you ?"

"All out lines are busy. To initiate inter-species relations, press 1, now..."

"You could be a winner ! To claim your cash prize, send the secrets of space travel to the following address...."


This project, which falls firmly into the category of "cool but foooookin' mental" is a response to the famous WOW signal. To commemorate this most ambiguous detection, we'll be tweeting the aliens on August 15th, the same date the 'Wow !' signal was received - and in the same direction too. But, since the closest star in this direction is 122 light years away, viewers will have to wait a couple of centuries to find out what the aliens think of Justin Beiber.
Posted by Rhysy at Monday, July 02, 2012