Recently I made a concerted effort to describe the schizophrenic nature of professional science. Readers will also have noted my heartfelt contempt for the unavoidable chore of writing papers. a process just as much of a double-edged sword as the analysis itself. While original thought is not only encouraged by a basic requirement to publish, original style is often looked on as heretical. 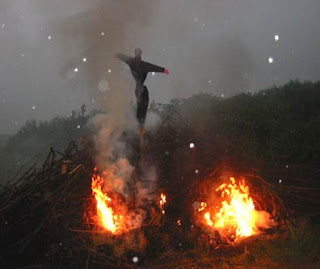 There is, alas, a very good reason for this - anything that can be misinterpreted could ruin other people's research if they try and replicate the results. Which leads to virtually every paper feeling as though they've been written by the same very dull person. The kind who can't watch golf because it's too exciting and brings them out in a rash.

You might therefore expect that actually collecting the data in the first place allows for the same creative potential, as, say, watching a brick. Not watching it do anything, you understand, just generally watching it in case it misbehaves. In keeping with the theme of schizophrenia, you're only half right. Or only half of you is right. Or are right. Whatever.

What the observing process offers that the other aspects of astronomy don't is free time. Last time I mentioned that most of this is spent reading the BBC website, which is true, but it is not the whole story. One thing I do is to decorate my notebook, using a biro. 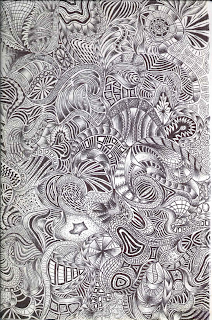 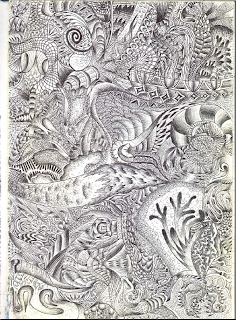 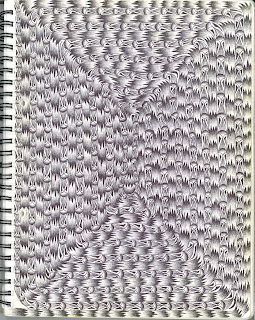 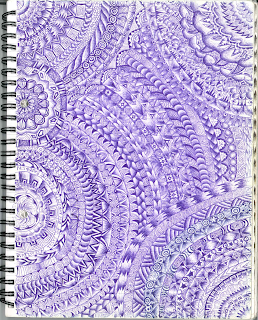 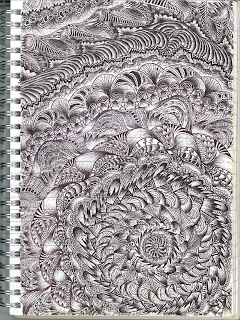 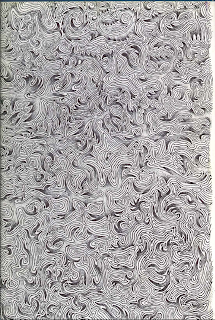 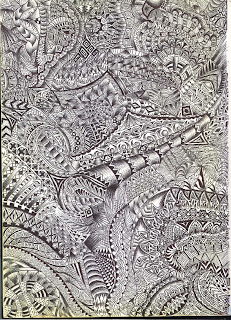 An earlier creative outlet, started by another observer, is to write poetry in the observing logs. Mostly these are in haiku form. Possibly this is because Wim van Driel really likes haikus, or maybe just because they don't take too much time and effort to write. The following are the haikus of other observers (namely Steve Schneider and Win van Driel) from the past 6 years of observations :

Night watches over
Let others gas discover
Sleep to recover

My own efforts are generally less poetic, with more of an attempt to use them as an actual observing log :

Observing quite smooth
Not much RFI tonight
All beams are working.

Observations fine
Not many warnings at all
Tea keeps me awake.

Not enough haikus
I shall rectify this now
With bad poetry

Beam 6B is down
Why so few haikus lately ?
We need Wim back now.

All scans completed,
All beams are still working well,
This haiku is done.

Being a fan of Edward Lear, like all good-hearted people, I attempted a single limerick :

It's a survey for deep HI data,
From a telescope shaped like a crater,
It really takes AGES,
So it's done in small stages,
And has a fixed-temperature calibrator.

Lately I decided that haikus lack a certain something, so I decided to go for broke and try to parody one of my favourite poems of all time : Kubla Khan by Samuel Taylor Coleridge. It probably helps to go and read the original first, if you haven't already. Coleridge was taking opium at the time, but all I had for inspiration was massive sleep deprivation.

In Arecibo did Kubla Khan,
A stately observing-run decree,
Where Tanama, the muddy river, ran,
Through caverns measurable to man,
Down to a sun-drenched sea.


The Tanama is the local river, which flows through some nearby spectacular caves and also goes underneath the Observatory grounds.

So about a mile of telescope ground,
With fence and towers girdled round,
And there were gardens bright on sinuous rills,
Where blossomed many a UMET-imported shrubbery,
And here were forests ancient as the hills,
Enfolding rainy spots of greenery.


UMET is the institution responsible for site maintenance. Which includes planting a lot of flowers.

But oh ! that very steep road which slanted,
Down the green hill toward a metal cover !
An underfunded place ! as holy as enchanted
As e'er beneath a waning moon was haunted
By a tiedown wailing from its demon-motor !


Tiedowns are cables which control the height of the platform. One of the motors is failing, which really does sound like the cry of a banshee, conveniently.

And beneath the dish, from unpaid overtime seething,
The drainage pumps no more were heaving,
A quite small lake momently was forced:
Amid whose swift rain-fed burst
Confusion spread like rebounding hail
Or scientists beneath [CENSORED]'s flail :


On several occasions over the years, for various reasons, a small lake has formed underneath the dish (in this case a reference to not being able to pay the necessary people to come and man the pumps, a particularly daft problem which was quickly remedied). [CENSORED] refers to an individual on whom I cannot possibly comment, for now.

And 'mid these dancing scientists at once and ever
Up flung momently the muddy river,
Several miles meandering with a mazy motion
Through wood and field the muddy river ran
Then reached the caverns measurable to man
And sank in silence to a tropical ocean.
And 'mid this silence so many from far
Sent a twitter message to a nameless star !


Which of course refers back to last year's music video and the current efforts to send twitter messages to aliens.

The shadow of the dome of Gregor
Suspended with metallic grace
Within was heard with mingled measure
A signal from the voids of space !
It was a miracle of rare device
A dome in air, and beans and rice !


The Gregorian dome - named after a mathematician called Gregory but Gregor will do - is where all the really cool instruments live. For the unaware, "beans and rice" is NOT an act of desperation to find something that rhymes - it refers to what is basically the Puerto Rican national dish.

A damsel wearing headphones
In a movie I once saw
She was an American maid
And with some telescopes she played
But what could be the headphones for ?


Of course, this is Contact, because one should never miss out an opportunity to make fun of Jodie Foster for using headphones at a telescope.

Could I contrive within me
To write dialogue and song
For an alt'rnate version of the movie
It would have music loud and wrong, [DAMN YOU KESHA !]
I will use that dome in air
That sunny dome ! The endless rice !


Since Coleridge's "caves of ice" just don't work here, I again refer back to the ubiquitous rice, and the music video.

And all who can should see them there,
A platform tour of ALFA's lair !
With flashing lights all twinkling there !

Clear a circle round him quickly,
And hold your nose with utmost dread,
For he on rice and beans fed strictly,
He rather'd something else instead.

Anyone suffering from questionable poetic tastes may continue to read this doggerel here. Most log entries aren't very interesting though, because not everyone who writes the entry (the "observer" column is the telescope operator, not whoever wrote the log) troubles themselves to assess the literary impact of their record of the night's events.
Posted by Rhysy at Tuesday, July 17, 2012