A few months ago my first paper was accepted for publication. This monumental monument to tedium destroyed my ability to write anything just as surely as if I'd slammed my fingers in a door. Fortunately my second paper is nearing completion, so out of sheer perverseness this seems like an ideal time to explain the gruelling and glorious reality of the scientific method.

First, someone thinks of something worth observing. So then we observe it. This process consists of using a small program to make a another small program that the telescope operator runs and lo ! Data is collected. Or we observe it ourselves, which mostly involves reading the BBC News website in great detail because there's not much else to do at 4am in a telescope control room. Except eat cake, and try to stay warm because the air conditioning is part of an experiment to see if humans are capable of hibernation or just die of cold.


* Unless you're a chicken. Umm. The similarities probably stop there, actually.

Data processing offers all the fun and excitement of watching a championship knitting contest (cos they totally have those, right ?). What we do is feed in a list of all the files we want to process to some magical software, and then we wait for about 2-4 weeks while it casts its enchantments on the 100 Gb or more of accumulated data. Finally, after years of observations and weeks of data processing, we end up with something that looks like this : 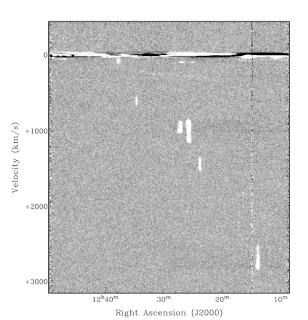 Those white blobs are, in fact, hydrogen gas clouds, even more rarefied than the most perfect vacuum ever created on Earth but with the mass of a billion suns and rotating at 450,000 mph. None of which stops them from looking like a bunch of blobs.

You may wonder what happens during all that time before the observations are finished. Well, I shall tell you, because now I've raised the question it would be cruel not to. Actually, it's very similar to what happens afterwards - at least, it is if your thesis depends on that data and you're not sure if the observations will be completed in time. In that case, you process as much data as you currently have and analyse all the blobs* you can find as you go along.

*Or, if you prefer, magnificent broiling spiral clouds of gas, where shockwaves propagating across thousands of light years  ignite titanic stars; where white-hot hydrogen is forced to fuse in fire into all the elements that make up man in a hundred billion stars that glitter like a rain of diamonds in a vast cosmic maelstrom, but "blobs" is more succinct.

What this means is that we run a program to measure the parameters of each blob, one at time. We can measure its mass (at least a million times that of the sun), estimate its distance away (in my field, at least 50 million light years) and measure how fast it's rotating (at least 70,000 mph but usually much faster). We get all this from examining graphs that look like this : 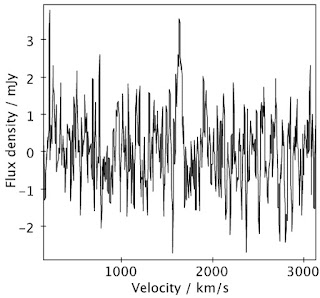 Depending on how large an area of the sky was surveyed, we analyse about 100-400 of these little blighters. Each one takes a few minutes. If you're still waiting for a Foster-esque moment where suddenly a revolutionary signal is found, you probably won't enjoy the rest of the post, so you should probably stop reading now. I haven't even mentioned the days / weeks of the manual examination of thousands of images it takes to find all the blobs in the first place, let alone the months of programming it takes to write code to do it for you.

Once all the measurements are taken they get tabulated. And those tables look like this :

But wait, there's more ! It's still not time to do any science, because small white blobs may be all well and good but they're not really of any interest to anyone except possibly Bill Clinton. Finding the size and spin of the gas is one thing, but the real question is - what is it doing ? Which means it's time to looks at pretty pictures, although people generally prefer to call them optical images.

Since the thing is typically as massive as a billion suns and made of hydrogen, the answer is usually, "forming a s***load of stars." Newly-formed stars are blue, so, usually the gas blobs are found in galaxies that look like this : 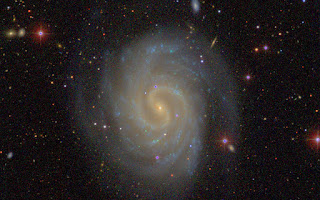 Lovely. And not very interesting, a bit like Denise Richards . Of course, people have spent decades trying to understand exactly how and why gas condenses into stars, and if you happen to have resolved maps of the gas there's a lot of interesting stuff you can do. Not with Arecibo though. All we get is the mass and spin of the gas, and that's pretty much it.

Fortunately, what we do have going for us is unrivalled sensitivity. Detecting gas clouds with the mass of ten million suns may not seem like much of an achievement, but if that gas is thinner than the most perfect vacuum ever created on Earth and over 300,000,000,000,000,000,000 miles away then it becomes a bit more difficult. In fact your only options are to spend many hours with a lesser telescope hoping to detect something, or use Arecibo, which can generally do it in about ten minutes.

This means we can detect the relatively little gas clouds. And that's nice, because they're way more interesting than the big pimped-up spirals. They're so interesting that some of them don't even have any stars at all. So my job, in a nutshell, is....

To look for clouds of invisible gas that don't do anything !

And a whole bunch of other stuff too, like finding galaxies that have had most of their gas removed so that no new stars can form. Or, to put it another way, to find the last wraiths of gas ere it is banished from the vast cosmic graveyards of doomed and dying galaxies, which, death-struck, embark on their epochal voyage into the infinite void of blackest eternal night, their reddened and ruined stars starved and choked, bereft of hope, their darkening light a tragic echo of once-brilliant splendour now fading pitiless in the void. Probably.

So, that's what science is. It's the pinnacle of adventure in tedium and monotonay, a hopeless job where the only people who care about your results are your nearest competitors (and they're guaranteed to hate it), the study of the birth of stars and the death of galaxies, the grandest of quests to understand reality but mostly it's all about looking at very long lists of numbers all day and occasionally going "Hmmm." And eating cake.
Posted by Rhysy at Friday, July 06, 2012