A Voyage To Snake Island And The Forest Of Unpleasant Pain

Firstly, whatever anyone else tells you, no matter how appealing the prospect of saving $100 on the plane tickets might be, do not, I repeat, do not, under any circumstances,

DO NOT TAKE THE FERRY TO CULEBRA.

There are two ways to get to Culebra ("Snake Island" in Spanish, which probably lacks a certain tourist appeal), a tiny island about 10 miles across just 17 miles off the coast of Puerto Rico proper. One is to catch a tiny, 10-seater plane which is adorable, takes about twenty minutes and is a lot of fun. The other is to catch a ferry. That's at least as much fun as being eaten by a snake.

The ferry mistake (I wouldn't deign to call it an option) involves waiting in line for around 8 hours, starting from 2am. This means actually getting to the island (the ferry takes 1.5 hours) takes longer than a transatlantic trip. The first half of this gruelling task consists of waiting in line to buy the tickets. The line is very long and is entirely outside, and of course there's nothing open at 2am (there aren't even vending machines). Theoretically, you may be able to get on a 4am ferry this way. But would you want to ? When you get there you'll be exhausted and nothing will be open, so don't do that.

If you have a large group, don't think you can get away with having one person take one for the team and wait in line all night. That's not how it doesn't work. How it doesn't work is that everyone in your group has to wait, otherwise you might not all get on (I'm saying "doesn't work" because this is not a system, this is not even organised chaos, this is just chaos).

The second half of the experience happens when you've bought the tickets. This part is inside, technically. The building is well-ventilated, but open to the air and so doesn't have air conditioning. There are vending machines and a small shop that opens at some ungodly hour, but there aren't anywhere near enough seats. For reasons best known to themselves, the staff insist on grouping everyone in tight, claustrophobic lines about 3 hours before the ferry is due to depart. This does absolutely nothing except annoy people. 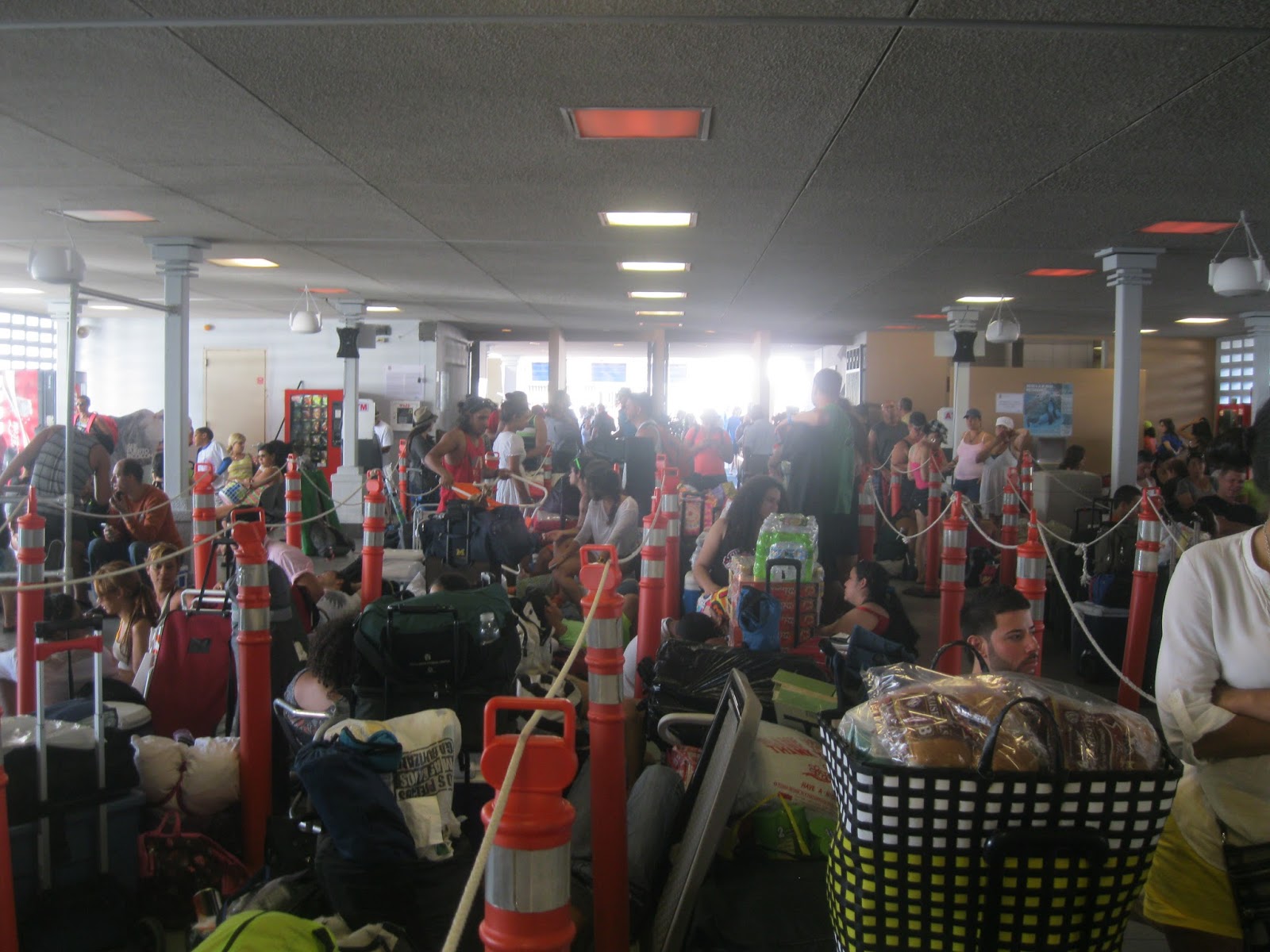 In short, getting the ferry to Culebra is not so much a public service as a cruel psychological experiment studying the combined effects of massive sleep deprivation and overcrowding.

Once you get to Culebra though, it's quite nice.

Last time we went we got trapped by a hurricane so were the only people mad enough to stay. This meant we had Flameno Beach all to ourselves. All four of us. On one of the world's best beaches. This time we went during the peak of peak season during a four-day weekend so it was slightly busier, but still frankly deserted by the standards of most British beaches during summer. 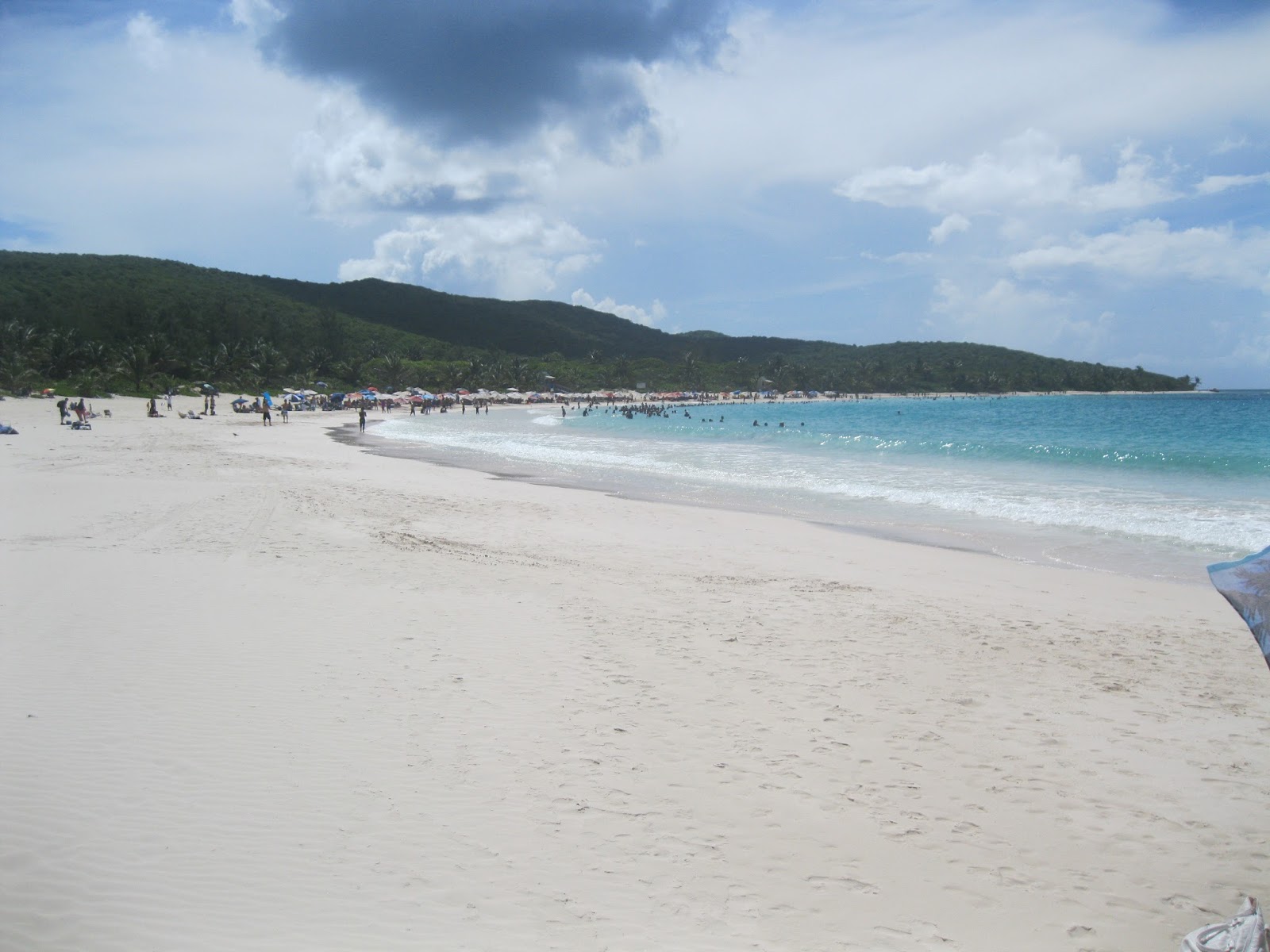 Flamenco Beach is popular not only because it looks quite pretty, but also because the soft fluffy sand isn't too hot to walk on yet the crystal-clear water is so warm that, if somehow stranded in it, you'd probably die of starvation before dying of exposure. It's just lovely. And also it has those bizarre tanks, left over from the times when the place was used as a military testing ground. While bombing the heck out of a tropical paradise might not be the greatest example of military stratagems, I have to admit that the end result - 30 years later - is really quite nice. 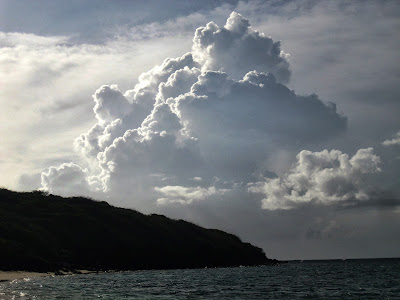 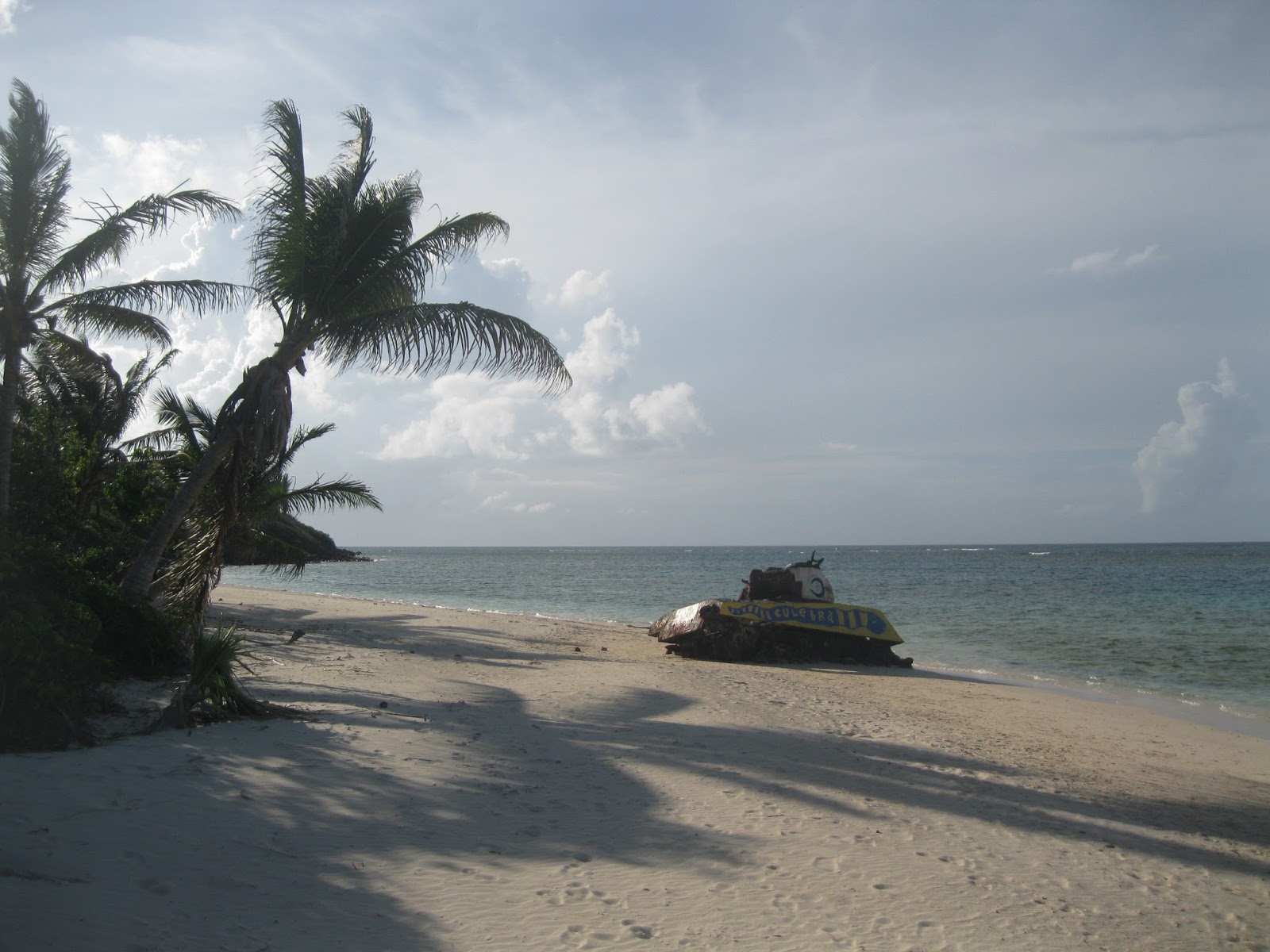 Our second adventure on Snake Island involved hiring a couple of kayaks and hunting for sea turtles. We didn't find any, but that was OK because the snorkelling was still up to nature documentary standards. At this point the Forest of Unpleasant Pain makes an appearance (to cut a short story even shorter, Sondy stood on something and went, "ow").

We took the kayaks to the ferry dock and I sat on the unpleasantly rocky (if you don't have footwear; note to self, always bring flip-flops) coast, guarding the boats from chupacabras (who knows, maybe they enjoy kayaking),  while everyone else investigated town. It was happy hour. I had no shoes, no shirt and no money, so people brought the drinks to me instead. Must be doing something right.

Finally we rowed around the corner to drop the kayaks at a dock near the airport. Except we didn't hear our rental company trying to attract our attention, so we pretty much chose a random plausible-looking docking point and went ashore there. This turned out to be the back of someone's house. One of the kayaks had taken on a lot of water, so we drained it and Sondy attempted to explain to the luckless lady of residence that we just wanted to take them through to the road and that she'd never see us again once we were on our way.

I don't speak Spanish, so I can't vouch for the translation. However, given that the woman's facial expression said something like, "You seem a harmless enough bunch of gibbering idiots", I'm not sure it was entirely successful.

We parked (?) the kayaks in front of Culebra's ecological school and drained the remaining water. Having no phones, minimal clothing and no real amount of currency, we were pretty ill-equipped to deal with any incoming apocalypses, unless they involved kayaking around a small lake and a spot of snorkelling. We got very confused looks from a lot of passers-by driving golf carts, which was curiously satisfying. It's pretty difficult to out-weird a Puerto Rican driver, but on this occasion we succeeded : "Washing your horse in the middle of the street ? Fine, don't mind me, I'm just parking my kayak." 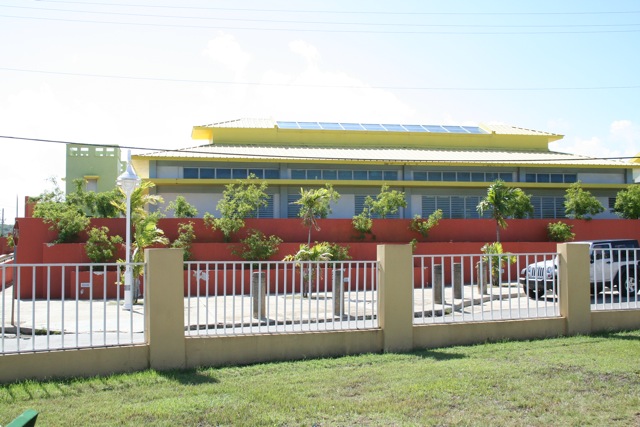 Having learned the lessons of the outward voyage, we took the plane back. We turned up at the airport at around 10am, gave the nice lady at the desk $50, didn't present any form of ID (well  I didn't anyway), and were back on the mainland by 11:20. Keep your bloated Airbus A380's. Tiny 10-seater aircraft are wonderful. 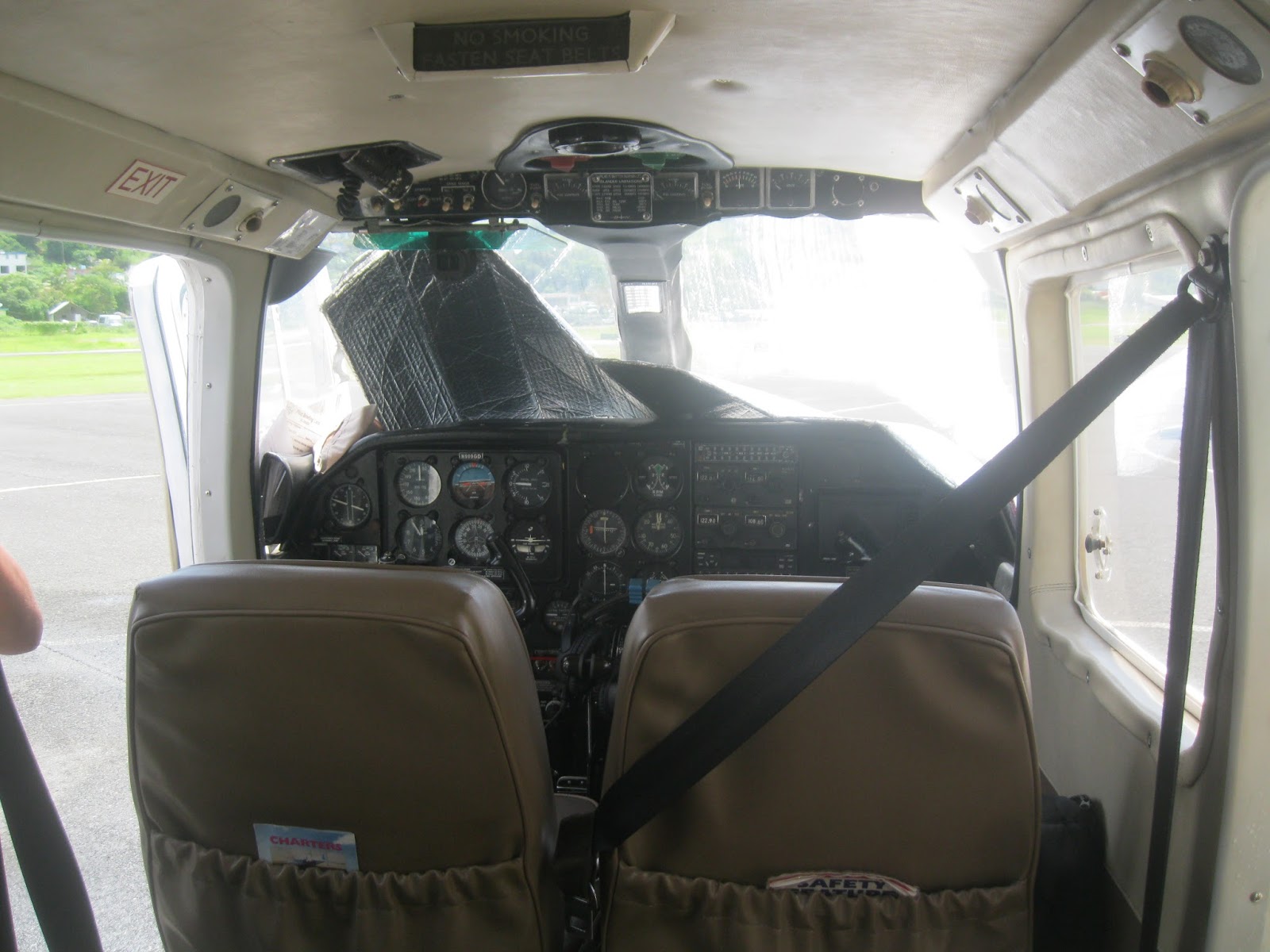 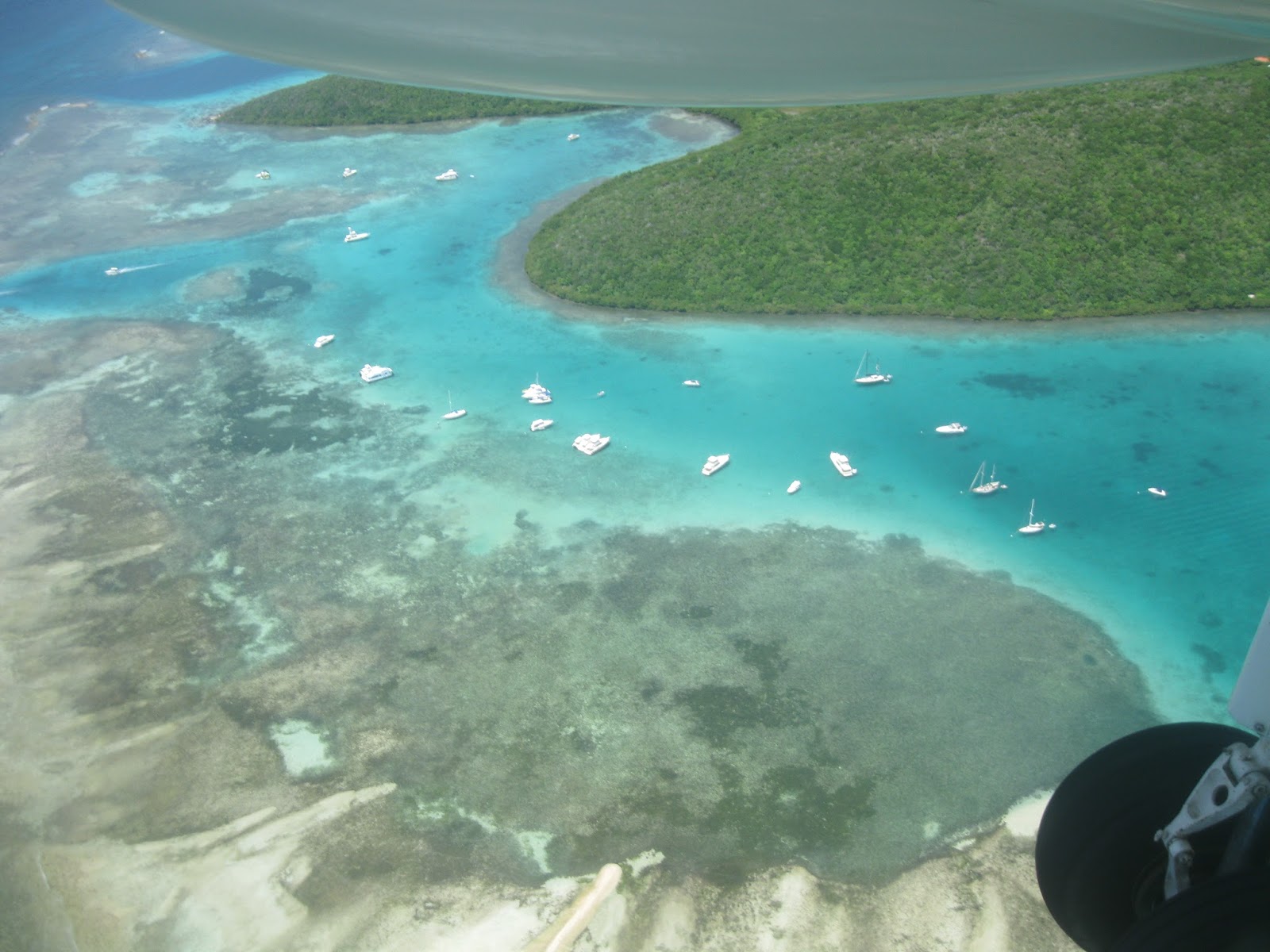 Back on the mainland, a large friendly dog came and supposedly checked our luggage. I'm not at all convinced of the effectiveness of this procedure, as the mental processes of this particular dog probably went something like this :

And so on. That about sums up what's probably my last Puerto Rican adventure... leaving aside some crazy scheme to discover the secret of Monkey Island. The hitherto pointless monkey counter on the side of the blog may get an update, as there apparently really is a small island full of monkeys not so very far away. The downside is that the secret of monkey island is that the monkeys all have herpes, and the words, "what could POSSIBLY go wrong" do tend to somewhat leap to mind.
Posted by Rhysy at Wednesday, July 31, 2013