So I saw a picture the other day comparing the size of Earth to Jupiter. Maybe it was this one :

... or maybe it wasn't. But it was very similar. Anyway, I immediately decided there must be a more interesting way to compare the sizes of the gas giants. Merely comparing the physical size is one thing, but it doesn't tell you about how massive they are (that is, how much stuff they're made of, which is not quite the same as weight).

Let's start with the least massive of all the outer planets : Uranus (you can do your own hur-hur jokes if you like, I don't mind). There's no getting around it - this is the least interesting-looking world in the Solar System. What can you say about it ? It's... blue. And round. Quite big though - almost 4 times as wide as Earth, with a mass equivalent to 14 Earths.

Uranus may look boring, but.... no, it's no good, it's actually incredibly dull. Apart from the fact it's tilted on its side (possibly due to a massive impact with something billions of years ago) and has wind speeds in excess of 900 km/h (560 mph). Ghastly place, with a temperature of -224 C (the coldest atmosphere in the Solar System), but one could hardly call a world-spanning ice hurricane* boring, in fairness.

On then to Neptune. This considerably more interesting-looking world is slightly smaller at 49,224 km across. It's also a bit denser, with as much mass as 17 Earths. 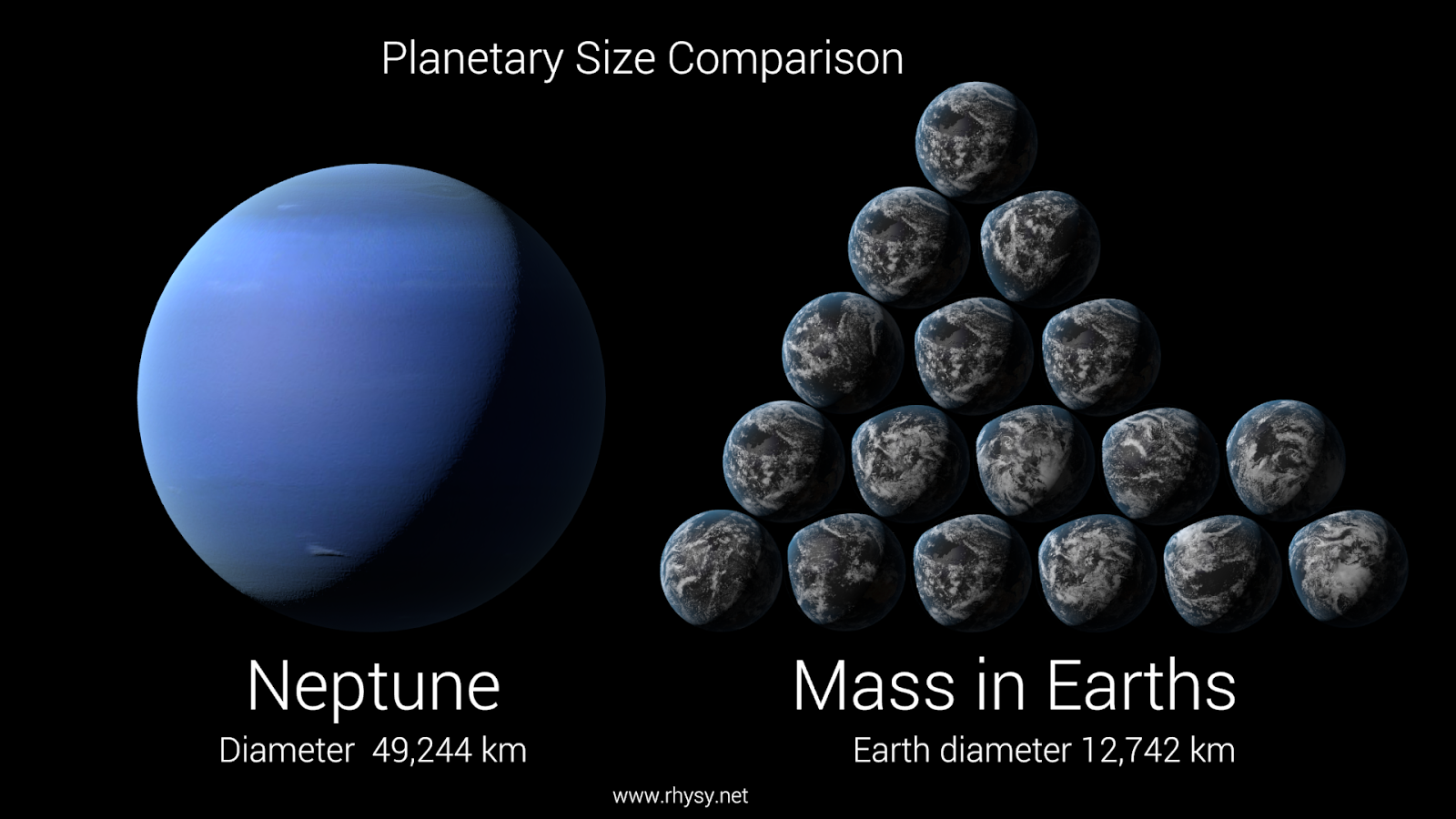 Neptune is an even worse place to live than Uranus. Sure, it's 25 C "warmer" (for want of a better word at -200 C) but the wind chill factor would make even a tauntaun shiver, or, more likely, die, because 2,100 km/h (1,300 mph) winds are generally pretty lethal, really.

Next we take a drastic leap in scale with Saturn. Saturn is a bit wider than 9 Earths, which is not all that much more than Uranus or Neptune. Unless you count the rings, of course, which are over 270,000 km across. 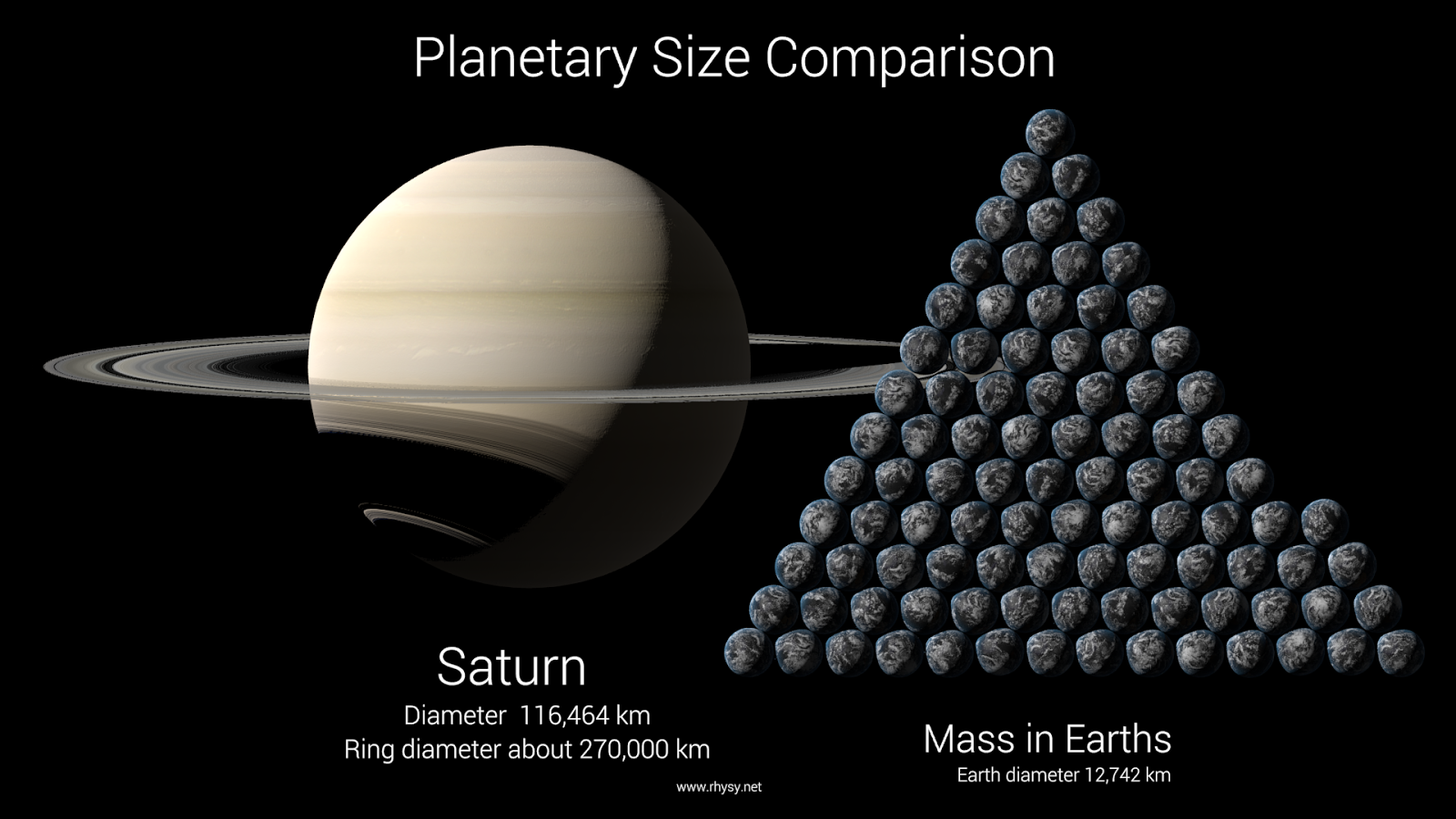 Saturn is bigger and so a lot more massive than the Uranus and Neptune, with as much matter as 95 Earths. But that's not as much as you might expect, given its size. Famously, Saturn is actually less dense than water - so if you could find a large enough ocean it would float. Though one suspects that by putting a gigantic ball of gravitationally-bound freezing gasses (-178 C*) into an offensively large ocean, something more dramatic would probably result than Saturn just quietly bobbing around.

* Things get a lot hotter - many thousands of degrees - in the core, mind you, as they do for the other gas giants.

At last we behold mighty Jupiter, largest and most pompous of all the planets with its colourful swirling gas and giant spot three times the size of Earth. It's not all that much wider than Saturn - about 20% - but it's a whole lot denser with a mass of something like 315 Earths. At a mere -150 C with winds of 600 km/h (370 mph) it's still a worse holiday destination than Port Talbot and doesn't (like the other giant planets) even have a solid surface. 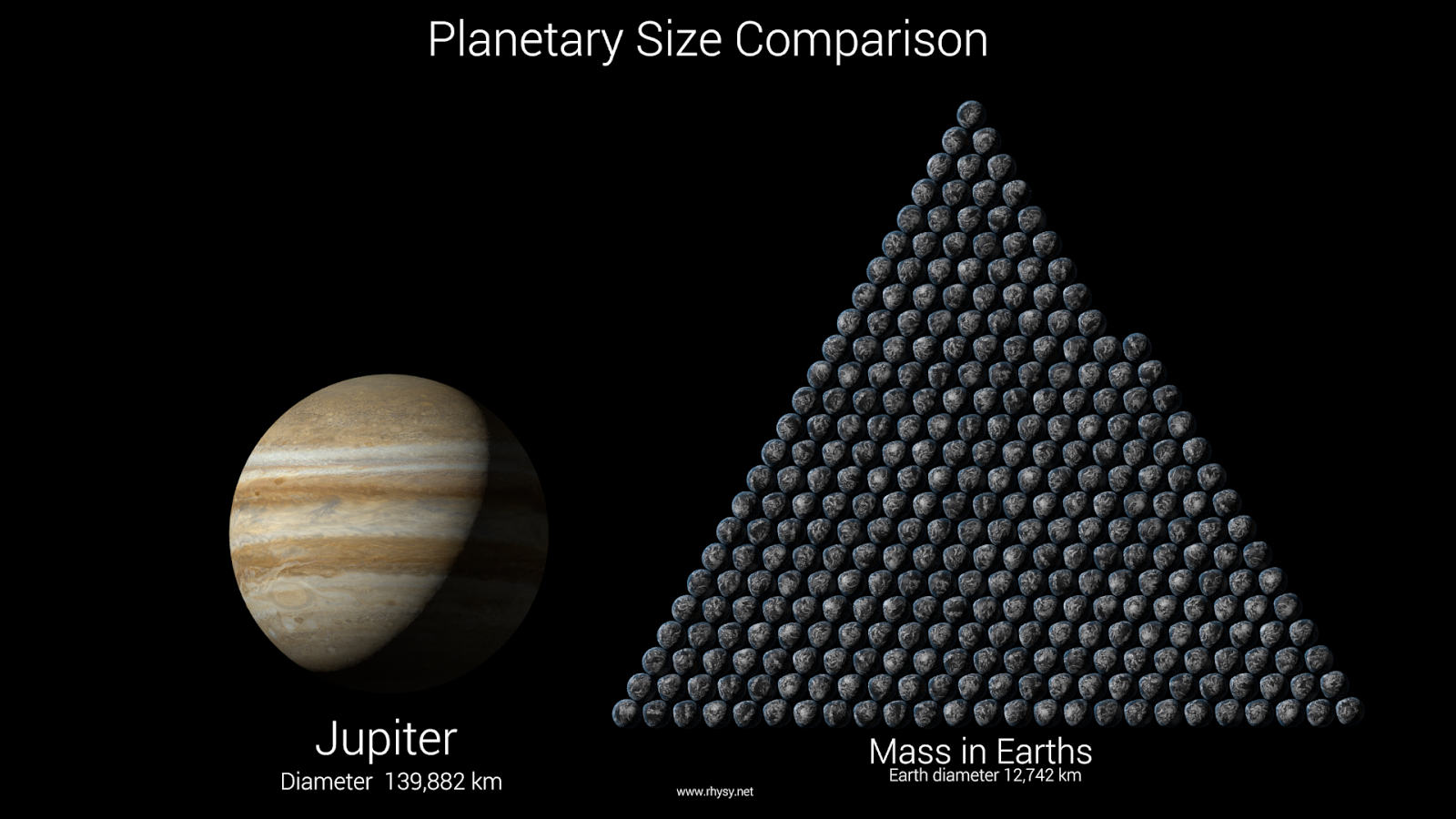 You might wonder why the planets are all so different. So does everyone else. As far as I can make out, there isn't much consensus as to what went on in the early Solar System. A lot of the old theories went belly-up when Jupiter-mass planets were found orbiting much closer to their parent stars than Jupiter does. It's been less than 30 yeas since the first exoplanet was confirmed, which really isn't very long at all if you're trying to understand how the world itself came to be.

Finally, the Sun. It's gassy (plasma if you want to be pedantic, which I don't) and gigantic, so it makes the list. The Sun is only about 10 times wider than Jupiter, but massively more massive... about 1050 times as massive. Although it's somewhat difficult to pin down at exactly what point a planet becomes a brown dwarf and a brown dwarf becomes a star, there's no doubt the Sun has completely crossed that threshold and completely dominates the Solar System. 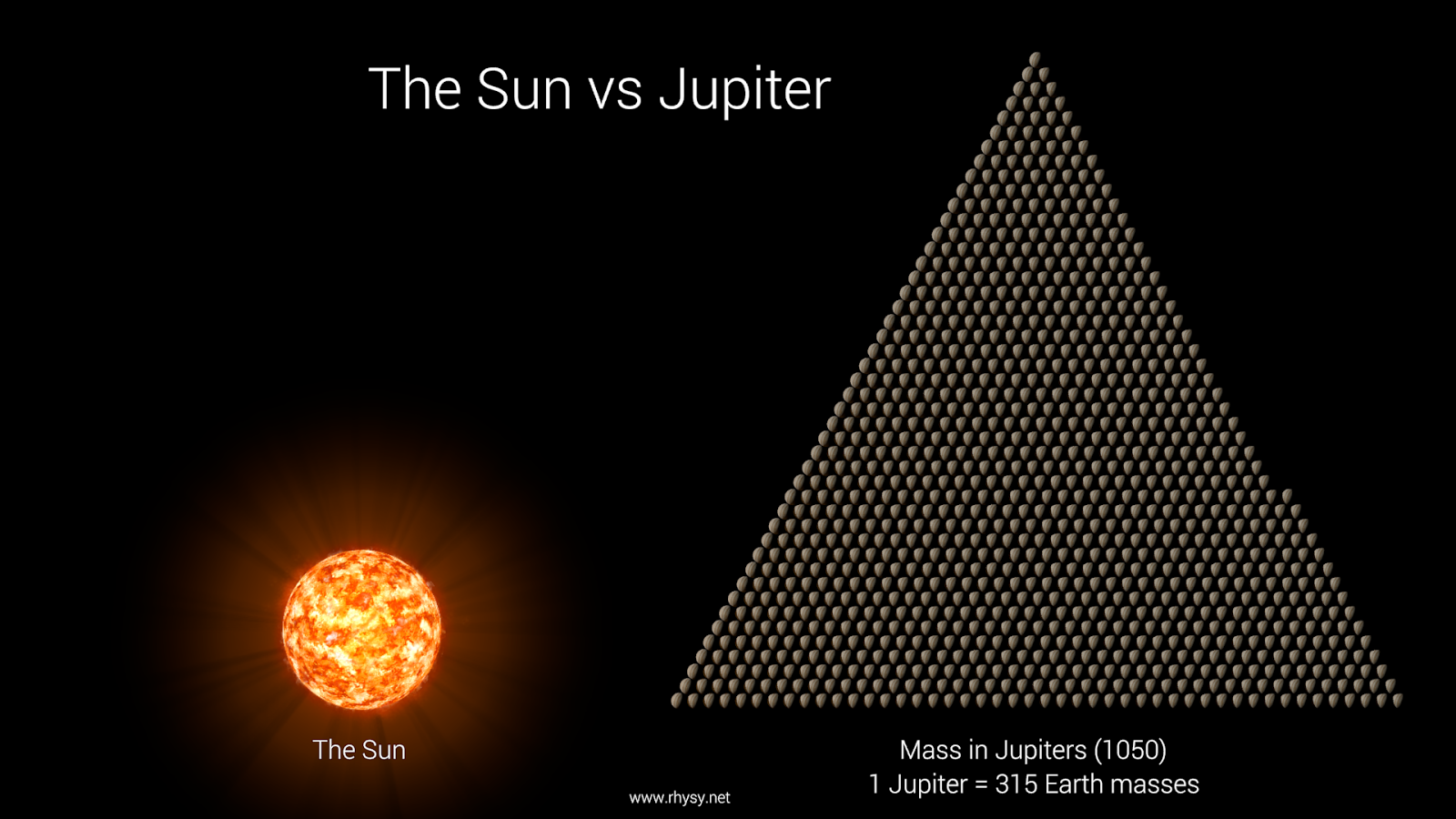 Still images are nice, but animations are better. I decided to take the "Blue Marble" name literally. Because... well, it's fun to make it rain planets.