The Curse of the SS

I've now commenced the process of actually living in the US, as opposed to temporarily inhabiting a hut that happens to be in the US. The first part of this process was getting a visa. The second part is getting a social security number, which has to be done here in person. This magical number, as far as I can tell, is a bit like National Insurance but way more important. For starters you need it for a bank account, which would be nice because then they'll pay me some money and I could move out of my little jungle hut.

I guess I could withdraw money from my UK account and move out sooner, but there's not much point. You probably need a social security number (if I call it an SS number would that be offensive ?)  to buy a car, because you need it for health insurance, life insurance, and pretty much everything really. And the first month on site here is free, so may as well take advantage of that.

Unlike a visa the process of getting an SS number is fairly painless (so far, anyways). You only have to fill in a single one-page form, answer a few simple questions ("Have you ever [done such-and-such] in the US ?" - answer always no) and show them a load of documents (passport, birth certificate, visa, etc.). Moreover the Americans have devised a system that's fiendishly clever that just would never have occurred to anyone British : if you have an appointment you don't have to queue*.

* However, there is also the Puerto Rican factor to contend with, which means that to get an appointment you can try ringing them but this won't work, so you have to actually turn up to book an appointment. Fortunately the HR people here - like everyone else - are so lovely they did this for me.

Alas it transpires you can't actually apply for an SS number until you've been in the US for 10 days. This is another one of those weird post-9/11 security measures. Consequently I won't get this magical much-vaunted number until the end of the month. However, to offset the bureaucracy slightly, next time I can just turn up and they promise not to ask me any more questions. But they still have to do a background check, which takes more time (so what was the point of the visa then ?).

But the best part of the process was the lady processing my application. Having a Welsh name causes a certain amount of confusion among foreigners who can't even point to Wales on a map and have only seen the word written down. I mean this literally. For example, on the way in the taxi driver asked me where I was from. Naturally I said, "Wales".
Blank look.
"Err... Britain."
Nope, still nothing,
"Ummm.... the U.K. ?"
"ohh...." he said quietly, in way that very obviously meant, 'I've no idea where that is but I think I may have heard of it, once, and I'd better feign knowledge in case I seem terribly ignorant.' To my lasting amazement, the guy had no real clue where the U.K. is, a country 20 times more populous than Puerto Rico and just a teensy weensy bit more influential on the world stage.

Some people. We went to all that trouble conquering everyone and now they don't even know where we are.

Which meant there was only one option left. Feeling as though I'd soiled myself, I said, "Oh alright, England then." - "Aaaahh !" Realisation dawned at last. A little part of me had died, but at least he had some - albeit incorrect - inkling of where I'm from.

So you can imagine the confusion an actual Welsh name causes given the extent of the local's geographical knowledge here. Back to the SS office. In this case the exchange went as follows :

No way was I going to prompt anything. It's far more fun to see what people come up with on their own, and I wasn't disappointed. At this point most people finally decide to go for broke and say anything -popular options so far have included Rhiss, Russ, and even Rice. This woman, however, was completely stumped, and finally opted for basic spelling : "R, H, Y, S ?" The fact that she looked exactly like the old woman from Monsters Inc. only made things better. 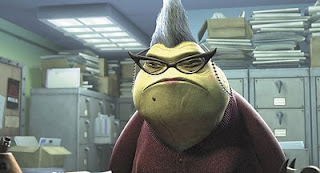 I really wish I'd said "Yes, that's right, my name is R, H, Y, S, it's what all my friends call me. It's actually an acronym for Really Hot Young Stud." Or possibly Really Huge Yellow Submarine... or Reconstructing Historical Yeti Songs... so many missed opportunities. Oh well.
Posted by Rhysy at Wednesday, March 09, 2011