A Trip to the Shops

Compelled by hunger and enticed with the offer of accompaniment, I finally decided that I could no longer live on cafeteria sandwiches in the evenings. There's only so much turkey the human body can handle before it gives up. Now since the observatory is several miles from anywhere and even further from actual civilization*, there are few options besides driving. Which is, after all, what I've spent the last uncounted months doing in order to get this blasted job anyway.

* Definition : place that sells things which are useful but unnecessary, like coaster holders. 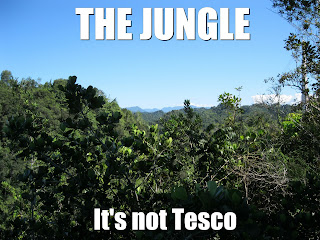 While I've previously speculated that driving a car with all its controls mirror-flipped and on the wrong side might not be such a good idea for a nervous driver such as myself, I'm happy to report that I was wrong. Firstly, having everything mirror flipped doesn't really alter anything. You're still looking in the same mirrors; the only real difference is that the blind spot is on the opposite side. And this doesn't really matter anyway, except when changing lanes. In fact, the mirror-flipping and wrong side of the road more or less cancel each other out.

There are at least two other factors :

1) NO ROUNDABOUTS
Good God we Europeans are retarded, thinking that having everyone drive around in multi-lane circles without markings, traffic lights and directed by massively complex signs is a good idea. To say nothing of double roundabouts, which are so preposterous as to beggar belief. WHY ?!?! What in holy hell possessed road designers to think them up ? The most likely explanation - it seems to me - is that there was a rogue eugenicist at the planning office, trying to kill off everyone not clever enough to navigate them.

2) AUTOMATIC CARS
Wow. These things are awesome. What in God's name did I waste my time with manuals for ? They're rubbish. I've heard people complain that automatics aren't fun, but these are probably the same people who think that sorting socks makes for a lively Saturday night's entertainment. In an automatic you don't have to worry about stalling - ever. Going up steep hills (of which there are very many indeed around here) this makes life approximately 6 billion times easier, and safer too. Gone is the need for clutch control - because there's not clutch - which makes moving off far simpler, and selecting reverse gear is no longer like trying to open a Chinese puzzle box.

If you still think automatics are not fun, then please explain how - exactly - a car that never stalls is not fun.

Not that this makes the driving process a cakewalk (nearly so, but not quite). For we have once again the Puerto Rican factor to contend with, which means that the other drivers are all mad. They seem to think that speed limits are more like guidelines (actually, near the observatory this isn't a problem because the limits are too low anyway but it's more of an issue on major roads). Changing lanes is done as fast as possible and without warning, and they probably think the two-second gap rule is something you're supposed to avoid. And the last time I was here some random drivers decided to smile, wave, and film us repeatedly with a camcorder stuck out of the window.

I'd like to take a Puerto Rican driver, put them in a manual and send them round a double roundabout. That'd teach them, but possibly not for very long.

This really is a story that doesn't go anywhere, because then I went shopping. What shall I tell you ?* I bought some food. Much of it incredibly similar to UK food, although ready meals and processed food are less in evidence. Most of the labels are thankfully in English and Spanish, so it'd be quite difficult to accidentally end up eating rat poison. So I managed to get food and not kill anyone - bonus.
* To use a Marco Polo phrase.
Posted by Rhysy at Saturday, March 12, 2011