So I've managed to survive my first week on this weird jungle island. And although not much has happened I'm going to write about it anyway.

Things are not so bad. For starters the funny little visitors huts may not be the most spacious or quiet places to live, but they do have decking, and because these are science huts the veranda comes equipped with power sockets and an ethernet connection. Finally a long-cherished dream can be realised : the ability to play Oblivion while being outside... I'm no longer stuck inside behind a screen all day ! Now I can be stuck outside behind a screen all day ! Wooo ! GO ME !
﻿﻿

﻿﻿Since this is a jungle it features an abundance of wildlife (besides the damnable coquis), mostly some rather drab-looking birds and cute little lizards. They do have hummingbirds, but these are rarer - I only saw one in my 7 weeks I spent here previously. There are also larger lizards (and big ugly frogs too) but I haven't managed to photograph any yet. And no, there are no monkeys. There's now a monkey counter in case this state of affairs should change. It won't. 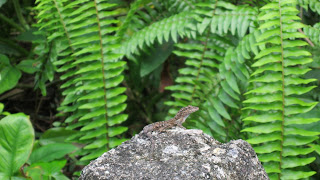 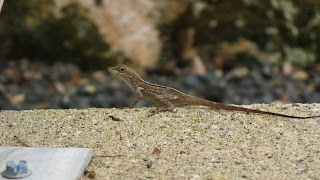 Not that there's anything particularly remarkable about an abundance of wildlife. My garden had more. No, seriously, it did. We had squirrels, rabbits, hedgehogs and woodpeckers and ponds full of frogs and fish which meant there were herons, and then there were the cats, dogs, and (occasionally when the gate broke) horses. And not so very far away there were foxes and badgers. It was practially Disney out there, only with less anti-semitism.
﻿
The observatory itself is also quite nice. I doubt there are many others which have a basketball court and a swimming pool. Not that I've ever seen anyone using the basketball court and doubt I ever will. No-one ever heard of an all-scientist basketball team, and let's face it, "sports science" is a bit of an oxymoron as far as real scientists are concerned. 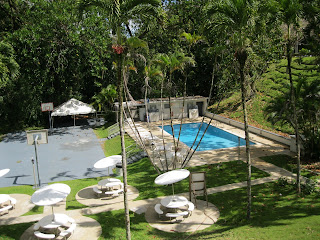 Sadly, the pool is not as inviting as it may appear. It's unheated and I managed to take this photograph during the 20 minutes of the day when it gets any sunlight. Consequently it's actually very cold - certainly colder than British heated swimming pools and much, much colder than the Caribbean sea. That's not me being cynical either*; most people here don't use the pool because it's too cold, so there.

I suppose I'll be violating some sacred British custom if I don't report on the weather. Well, unlike the pool, it's warm. OK, very warm. But surprisingly, it's not always that warm. In fact some nights it gets rather cool, probably because this place is well inland and 240m above sea level. Annoyingly I don't have any thermometer to say just how cold it gets, but the coldest ever temperature in Puerto Rico was 4 C (in the town of Aibonito at 730m altitude). Provided you stay inside during the heat of the day, dress sensibly and don't move around much (or it's cloudy), the weather could even be described as quite nice*.

* However if you don't follow these guidelines then you will rapidly find the weather is not so much oppressive as it is crippling in a trying-to-breathe-steam way.

It also rains here, even though it's the dry season which is supposed to last through April. I've been here a week and it's rained 3 times, twice at an unremarkable level, once torrentially for several hours. "Torrential" hardly does it justice. Since all things can and must be compared to Jurrasic Park, remember that scene just before the T-Rex attack where Alan Grant fills his bottle by holding it outside the car ? Well, it's like that, only very much louder, since these little huts have thin metal roofs. It literally roars.

So that's Puerto Rico for you. A surprisingly cold, damp  and hilly little island in the Atlantic where it rains a lot... hey, wait a minute....
Posted by Rhysy at Monday, March 07, 2011