Well, here I am again, on this funny little island full of sunshine and frogs. After escaping from the plane I was whisked away by taxi straight here, arriving at about 1am. Naturally, after 24 hours of travelling and even more without sleep, I was far too tired to sleep. Isn't jet lag fun ? 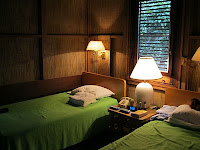 Consequently the next day was something of a blur. Where to begin ? Well after arising from my lack of sleeping I headed to the much-feared canteen, a place I have often espoused as having as much to offer the culinary world as Colonel Gadaffi does to good government*. Astonishingly, thus far the place has not lived up to its previous standards, which is a very good thing indeed.

* Possibly if the Colonel was to swap places with the chefs for a week the world would be a happier place.

The bacon no longer splinters ! The rice has gone imperial (it's now served by the pound, not the kilo), the chefs have been alerted to the existence of animals other than chickens ! THEY SELL ROOT BEER. The King of Beers. At ridiculously low prices.

I then spent most of the day meeting and re-meeting people. Much time was spent in Human Resources, which es moi importante para mi por que it will eventually give me a nice shiny paycheck. Which involves getting a social security number and a bank account. They also gave me forms about health insurance (dirt cheap and simple), life insurance (here my brain melted) and investment opportunities for retirement plans (here the rest of my brain slithered away).

These things are slightly scary and probably only for proper grown-up people, so enough about them. Far more importantly, I got my own office. Wooo ! Of course, it's now my responsibility to fill it with toys, because that's what offices are for. The last one had a desktop trebuchet, which will be pretty tough to beat. I've got work to do... 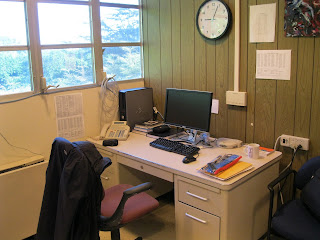 At some point in the day I wandered back up to my little hut where I was able to get a good night's sleep, finally. This was partially because of the a.c., which is loud but very effective. Things were not helped, however, by my two other Puerto Rican hates which haven't changed at all.

The first is the frogs. One of the national animals of Puerto Rico is the coqui frog, so named for its distinctive "co-qui" croak. These 2cm long bastards are present by the million and each one is as loud as a person whistling. As far as I'm concerned they should all be squashed, electrocuted and gassed, but not necessarily in that order.

The second factor is the climate. I'm always amazed and disgusted with people who think a tropical climate is some sort of mythical magical paradise. What's wrong with the world ? It's horrible. Daytime temperatures here are over 25 C with humidity that you'd expect somewhere tropical. This isn't paradise. This is bearable. Still, night temperatures here are actually quite pleasant when the sun goes down - about 16 C - though the humidity remains annoying.

Well, that's about it for now. Unless you want to hear tales of my bravely re-drafting chapters of my thesis into publishable papers. Which is unlikely.
Posted by Rhysy at Thursday, March 03, 2011