Flight of the Concourse

Soo.... the banner's changed. Again. Which can only mean one thing - I've actually defied the odds and made it all the way to the Caribbean. Hurrah ! Now I can actually write a travel blog, which is what I intended to do 6 months ago...

First, the flights. US Airways baggage policies are weird and make no sense. From their website it seems a simple matter of paying an overweight baggage fee (since I plan to be here at least a year and can't be bothered shipping stuff, the need for going overweight is a no-brainer).

Alas the website has much in common with Nick Clegg, in that its promises bear little resemblance to fact. "It's 38 kgs !", said the attendant, "You're simply not allowed to travel with more than 35." Which then became a remarkably complicated series of instructions to buy another bag (£70), and get the weight in each down to 23 kgs. The net result of which is that I ended up buying a second case, spreading stuff into the two cases (but not taking anything away), and not having to pay a surcharge - even though I'd actually increased the net amount of stuff I took on the plane...

Spectacularly baffling. Unlike the Arctic, which is just spectacular. The photos do not do it justice, but here's one anyway. These are over land, somewhere. The sea ice is equally impressive, because it looks exactly like giant marble. Everyone should see the Arctic from a plane at least once. 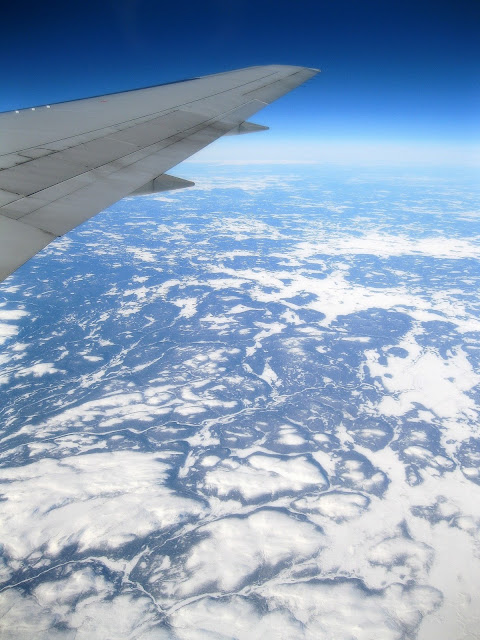 Luggage aside, US Airways are actually very good. What they lack in in-flight entertainment (which is to say, everything) they make up for in food (beef that tastes like beef ? that's more than Virgin ever manage) and seat quality. Unlike Virgin, they've realised that passengers can make their own entertainment for 8 hours, but not their own seats. Bravo.

On landing in Philadelphia they proceeded to shoot themselves in the foot in my eyes by having my connecting flight at a completely different gate to the one on my ticket (which I hasten to point out they'd printed that very day). I'd already been delayed at customs by the world's slowest queue, so to reach the advertised gate I'd gone on quite a brisk 20 minute walk.

I then discovered a surprisingly few number of people waiting at the gate, and soon found that it was because the plane was not there at all but at a gate on the other side of the friggin' building. In a blind panic I caught sight of a clock which said 5:30. The flight left at 5:45. So, whilst wearing a jumper and jacket and carrying a hefty laptop bag too full to carry them, I achieved near-Rincewind velocities through the crowded airport terminal.

Gate 12 turned out to be cunningly hidden somewhere behind gate 14, for no reason. By now drowning in my own stinking sweat I discovered that I'd completely misread the earlier clock. It was still only 5:20. Or equally possible is that I achieved FTL capability and arrived before I left...

I shall return to the subject of flights in due course.
Posted by Rhysy at Wednesday, March 02, 2011