Lessons for Those Planning a Physics Conference 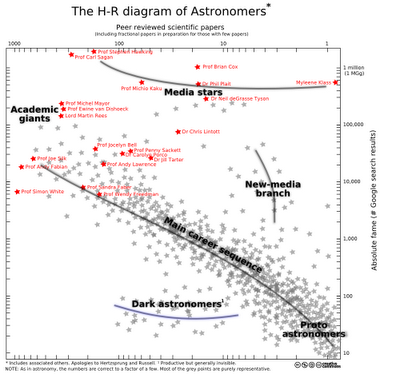 Of course, measuring fame in Google hits is a tricky thing. Consquently these fab five were all completely unbeknownst to me, despite having made breakthroughs in pulsar research for longer than I've been alive. Which just goes to show that fame is a fantastically fickle thing. From the diagram we may infer that there are several ways to achieve fame through astronomy (but the majority of us never bother).

Strategems include :
None of our fab five have adopted any of these approaches, which is probably a good thing. That does not, however, detract from their fame within their own fields. And as such, that means they deserve their own conference. Wooo ! Conference !

Now the last conference I went to was in the far-distant land of Hertfordshire. It was noteable for several things. Firstly, it was in Hertfordshire, which is little more than a glorified motorway service station, where instead of tacking on a Premier Inn someone decided to add a university instead. In other words, it's really dull.
﻿
﻿
Then there was ESA bigwig David Southwood, who gave a speech noteable for its bigoted, racist slanders against... well, everyone really. That was educational. By the end of it I was feeling racist towards the British for allowing this man to go anywhere near Europe. However, it was utterly trumped by another ESA bigwig whose name escapes me but who had a thick Austrian accent. "Haartfodshaer" never sounded so good. Thanks, Arnie, you've saved the conference.

And yes I'm aware that the last statement could be constituted as casual racism, but don't talk to me about that until you've heard a lecture by Southwood. 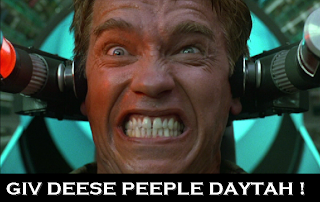 Anyway, this conference had none of that. What it did have was, for starters, a much better venue. Arecibo does not aspire to be anything other than a radio telescope. Consquently what you get is a radio telescope with a visitor center attached. Although the sources of entertainment here may be even more limited than Hertfordshire (a place which has stalls that sell cups of corn - not popcorn, just corn), they're far, far better at exploiting those resources that they do have.

For starters they are very liberal with their free food, which always helps. Especially when that extends to ice cream sandwiches and root beer. Sensibly, there were tea-making facilities provided within the auditorium itself. Which also has a door that opens onto one of the best views of the dish it's possible to see - something which never gets old and certainly trumps anything Hertfordshire has to offer. Not even the shopping center can compete with that.

The highlight was definately the evening's entertainment, which consisted of a free bar (and more food) by the pool. In tragic defiance of probability, no-one fell in. This was followed by an observing session. Never before have I seen 50-odd drunken astronomers and students crowding the control room (along with with two guitarists and a quatro player) listening to and watching a dead star make a speaker vibrate.

So that's how you hold a physics conference. Forget the media stars, pick some people everyone's genuinely impressed by instead. Then make them gorge themselves with food, ply them with alcohol, get them all vaguely trying to do some science, and if possible push at least one of them in a pool. You won't get famous but you won't be unpopular either.
Posted by Rhysy at Monday, March 28, 2011