I was all set to write a nice inane little post about Christmas time in the Caribbean, when my plans were brutally scuppered by the unstoppable forces of karmic retribution. Yesterday I received a lovely email offering me money for CGI I've already done, which is always nice (this the second time this has happened). Coupled with my imminent return to the UK for Christmas, this gave me a warm glowing fuzzy feeling inside.

In this case the forces of karmic retribution took the form of a small oncoming car, which collided with the side of mine as I was leaving my house. The driveway from my house is steep, so it's very difficult to see anything to the right. So I've developed a paranoid habit of emerging just enough to see if anything is coming, then rolling back down if there is anything, and repeating the procedure until there isn't.

Most of the time, if anyone sees me they stop and let me out. So this morning, when I spotted an apparently distant, slow-moving car, I carried on emerging - an act of colossal stupidity. Because the car wasn't slow or distant at all. And my car's ability to make sharp turns has all the grace and elegance of a constipated sumo wrestler -  so I ended up on... ahem... the wrong side of the road.

In my defence, if the car had been doing the speed limit there would have been no problem at all. Alas, it wasn't. The driver tried to screech to a halt - literally burning rubber - but by this point disaster was inevitable. And so kerblamo ensued.

Fortunately my car also shares the sumo wrestler's remarkable ability to withstand large heavy objects colliding with it. It has a rather nasty dent in one side, and one headlight isn't working (the main beam, is, bizarrely, fine). The plastic light casing is intact, and the wheel is fine. Compared to the other car, this is nothing short of astonishing. For that much smaller car has a crumpled bonnet, a shattered windscreen, and generally looks like a wreck.

In some ways, there's no better place to collide with someone than Puerto Rico. For the locals are used to accidents and - by and large - surely among the finest in the world at dealing with people in distress. While I was fretting like a wet hen (do hen's fret when damp ? what about roosters ?) the driver was nothing but a model of jovial politeness. Long story short - I spent the entire day filing police and insurance reports.

What happens next in this particular saga, I've no idea (although I was assured many times that I wouldn't have to pay any money). One thing is certain : next time I'm moving to somewhere with public transport. Until then... home time !
Posted by Rhysy at Thursday, December 08, 2011 No comments:

Somewhat of a dearth of posts of late, owing to Skyrim, which I think is a perfectly reasonable excuse. And why not ? My character, Bill, is a fire-breathing orc werewolf with a magic sword that can make zombies explode. Whereas all I do every day is write code and look at static. Even if I did have a magical flaming sword, I'd probably have to sell it on eBay. As for turning into a wolf, unless wolves have some hitherto unknown talent for IDL coding then that wouldn't help either.


About the most exciting thing I've done lately was to replace my expired marbete. This is the most basic level of car insurance, which everyone is required to have (it costs $200 and lasts a year). So I'm finally a legal driver again. Not that I was ever an illegal one through any fault of my own. I bought the car in an excessively Puerto Rican fashion, paying cash firmly in hand (which is entirely normal here), and then handing over copies of my various documents to some guy in a pub* to have the ownership transferred.

* It was actually a colmado but you get the idea.


This isn't as crazy as it sounds, although it's difficult to explain fully without becoming tedious. Anyway this guy decided to wait a full two weeks before telling me that he'd lost the documents I gave him so I had to give him new ones. And then another two weeks before the much-vaunted ownership details made an appearance, bringing my brief flirtation with the seedy criminal underworld to an annoyingly belated conclusion.

Rather more interesting was the drive to replace said marbete. Along the way I encountered one of the more insane examples of metal theft. Now I've heard lots of stories about people stealing copper cable, in some cases pretty extreme examples of thieves stealing hundreds of metres of phone lines. What I wasn't prepared for was the idea that people would steal the frickin' manhole covers.


I should mention that there is no equivalent to vehicle or road tax here. So potholes aren't isolated, inch-deep depressions - they're present everywhere and are often more than 6 inches deep. It's better to think of them as mines - either they exploding kind or the digging kind, it's all good. Ironically, being used to random depressions in the road made me decide to completely avoid the apparently innocuous circular pit looming in front of, which didn't look that intimidating from the low angle of the driving seat until the very last second.

At the very last second was a different matter. Then I realised that it wasn't a shallow pit at all. It was a metal-lined tunnel with a depth measured in feet, not inches. There were two more examples slightly further on, but in these cases some helpful soul had decided to wedge in a large plastic bollard, like buoys of the road.

Which does beg the question of what anyone wants with a manhole cover and how they go about selling it. Anyone with the facilities to melt them down is certainly too rich to benefit much from manhole cover theft, so presumably they're sold in the same state they were stolen in. I can only imagine conversations that must go something like this :
- "Is this a manhole cover ?"
- "No."
- "Oh. Well, OK then."

Or maybe these thieves are more enterprising. Perhaps they're co-ordinating their efforts, and stealing from multiple districts at once. That way manhole covers aren't lost, they're just... exchanged. The thieves get money, the roads get manhole covers, everybody wins ! Except the taxpayers. And any unfortunate motorists who are caught unawares. 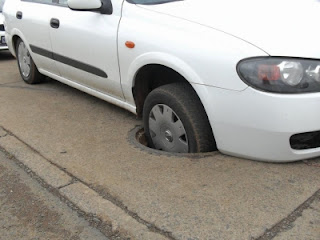