The recent set of horrendous delays have made me much more trepidatious about travelling. Sure, being stuck in an airport isn't as bad as a brick to the head, but it's still not very nice. But I have a bunch of travel money now, so I'm compelled to go places... although perhaps in future I can just delegate my postdoc to do it for me. We'll see.

Being somewhat paranoid since easyJet* have this demented policy that you can only have one piece of hand luggage, even if the other piece can go under the seat in front of you**, I packed lightly enough that I could get my laptop in my suitcase if need be. On this occasion I needn't have worried - it turned out my ticket allowed no less than three pieces of hand luggage anyway, and all the flights went smoothly. Three hours to Madrid, four hour layover***, three hours to Tenerife for the conference. Boring, but not awful.

* I flew Air Europa and Czech airlines this time.
** They don't usually enforce this, but you never know. That it's even a policy at all is ridiculous.
*** You need at least two hours in Madrid to be sure of getting a connecting flight, because it's the size of a small city and - although otherwise nice - it's very badly signposted.

My only point of confusion came when I tried to walk from the airport to my hotel, which Google Maps says is a 40 minute walk - just what I need after being stuck in a tiny space for three hours. But it isn't a 40 minute walk. It's a 40 minute death-defying game of chicken between you and the cars on the busy highway. The lack of pavement was fine on the quiet backroads, but even after following the directions of a local, I was soon forced to admit that the only way forwards would be essentially to walk along the hard shoulder of a motorway, and this didn't appeal. So I gave up and went back and got the bus. The only difficulty there was the rather surly-looking (and sounding) bus driver, who tried very badly to explain that I needed to put my suitcase in the storage bin, rather than actually opening it himself unlike every single other bus driver I've ever encountered.

If you're thinking of visiting Tenerife, you definitely should. But be advised that La Laguna is not a very touristy place : it's nice, but it simply doesn't factor English-speaking tourists into its equations.

Fortunately, having travel money to burn, my hotel was a nice one. Things are weird like that when someone else is paying. Sometimes you get places so bad that the only good thing about them is that they don't catch fire. And at other times you get opulent luxury.

This place wasn't quite opulent (at least my room wasn't, though the lobby was), but it was very good. The restaurant, however, turned out to be probably the best I've ever had. For €12, every day I had a massive buffet breakfast and ate too much ALL the cake - and it was all delicious. The chocolate croissants were so chocolately that I'm actually glad you can't get ones that good anywhere else, otherwise I'd be stuffing my fat face with them right now. And for €16 I could get a three course meal which was equally monumental.

Anyway, I didn't have a lot of spare time on this trip. I hadn't planned anything, so for my only free day I wandered around randomly - which I maintain is an absolutely essential part of any tourism. And like I said : La Laguna is nice, but there's nothing much to actually do. One day was nice but quite enough. 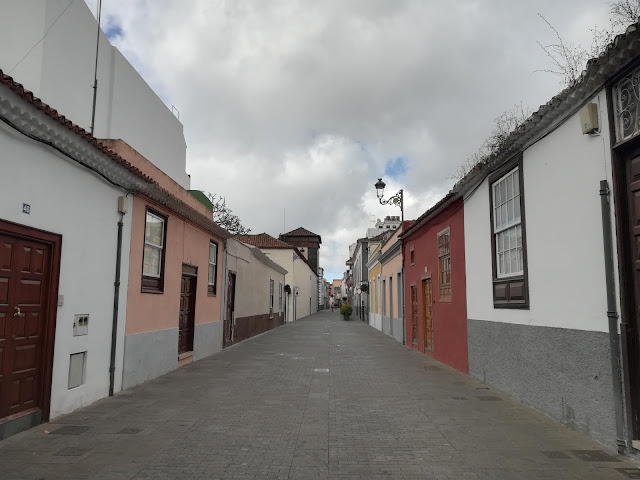 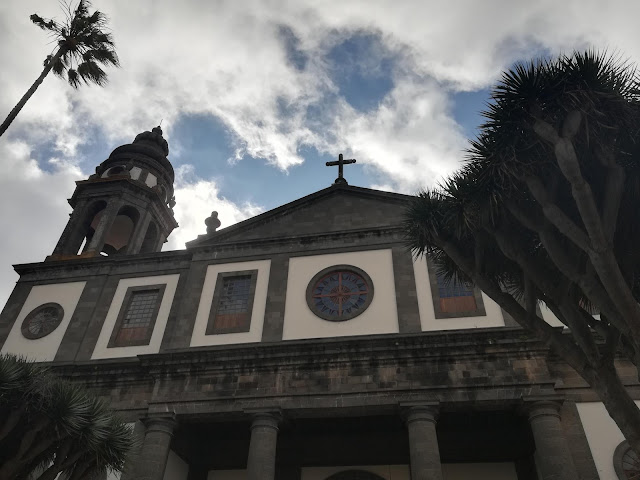 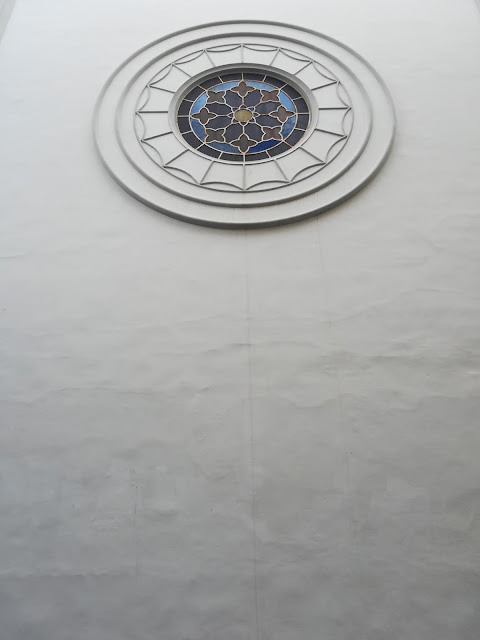 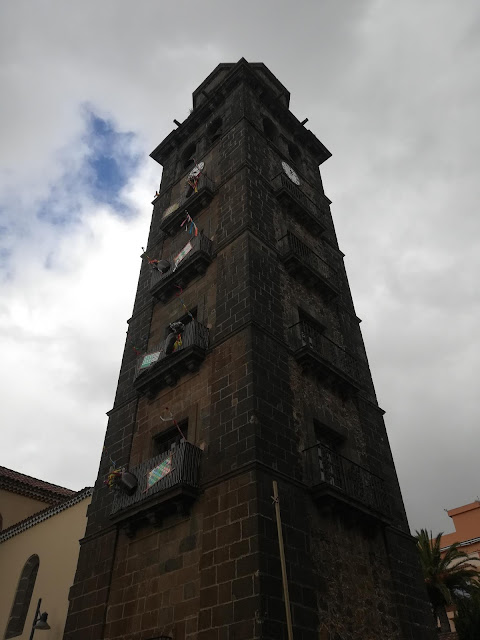 Walking around La Laguna's narrow streets, I caught frustrating glimpses of a more impressive landscape beyond. Too often the buildings seem specifically chosen to obscure a perfect decent view instead of revealing it. Having not much luck walking uphill, I decided to go down. This gave a deceptively good view of the sea, which looked close but was actually many miles away. Fortunately, there was one nice loop of road which does nothing at all except provide a rather nice view. Quite literally : it doesn't take the traffic anywhere it couldn't go faster by another route. 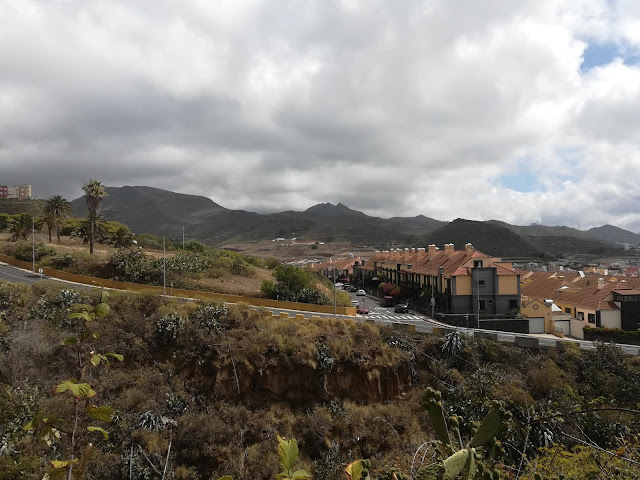 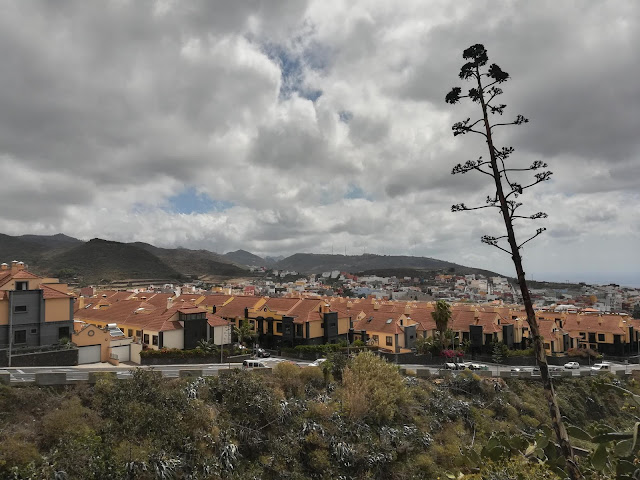 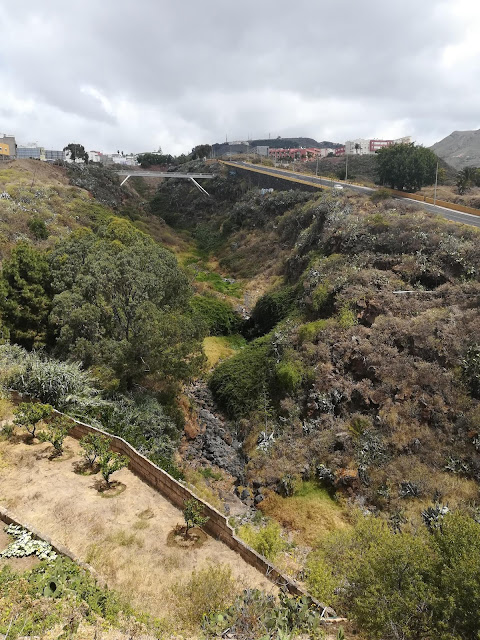 Later on I decided to try a different direction. After a couple of failed attempts to get up the hill, I found a route which took me somewhere nice. There was absolutely nothing there, but it gave me the proper vantage point I'd been seeking. 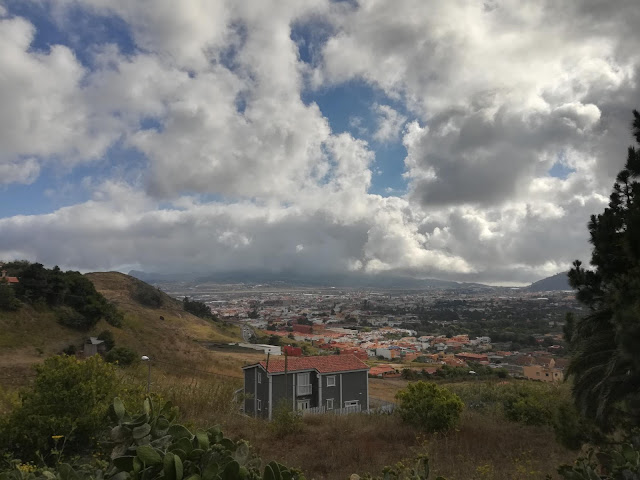 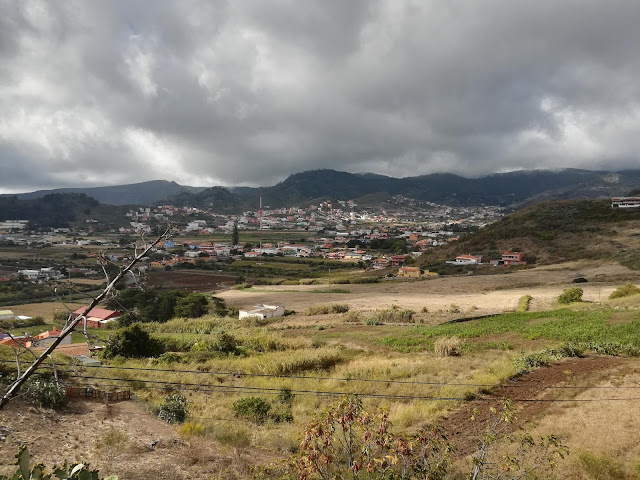 Before the conference could begin I had to do remote observing, starting at 3:45 am and running until 5 am. Oh, yay. The first night this simply didn't work at all, and all I got for my trouble was a loss of phone credit as I tried multiple times to phone for the password. I tried the hotel phone and got a confusing American voice telling me that "all circuits are busy". After about half an hour of this, having had little enough proper sleep, I gave up and caught another two hours before I had to head out to the conference.

I found out the next night that it wasn't a problem on my end at all, but with Arecibo's phone lines : there was no way I'd have been able to connect. The next night I had no connection problems, and was rewarded with the usual CIMA screens : 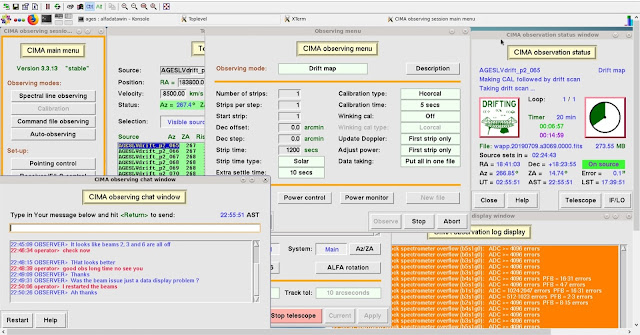 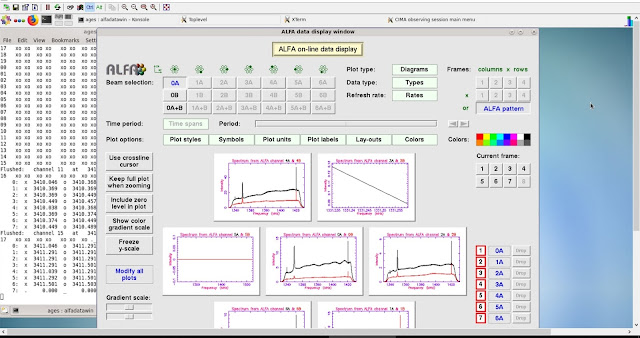 It isn't actually as bad as it looks, but at 4 am with little sleep two nights in a row it's quite bad enough. There was a blissful 30 seconds when everything seemed to be working perfectly, and then warning messages started which got worse and worse until the scan failed in a way I've never seen before. The rest of the session was spent fruitlessly trying to find the problem and failing, although the operator seemed to nail it down eventually.

The third night things got off to a slow start, and I strongly suspect the first scan is useless, but the second one seemed okay. So for all this effort I managed to get one scan of... a void. Yay. Add to this the intense conference schedule (9am - 7pm, longer on some days) and you can imagine that I was quite tired. I say that this is what real science is : working 10 hour days and getting up in the middle of the night to get a scan of a field you're almost certain doesn't contain anything interesting and you don't get to find out the result for several years. There are some compensations, mind you.

What of the conference itself ? It was first rate. I've written a summary of the highlights so I'll largely skip over this here. In brief, there were quite a lot of, "here are the problems we face and the ways we're planning to tackle them" talks, perhaps a bit excessively so, but there were also plenty of really interesting science talks too. The major themes were that galaxies look remarkably different at low surface brightness levels, that we're going to face major data challenges in the years ahead, that we don't fully understand ultra-diffuse galaxies yet but we're definitely making progress, and that the future's bright dim. Way too many people made that joke.


Back to being a tourist

Okay, science over. But the conference also included a dinner in a five star hotel, situated near a lovely park albeit with a weird fountain... 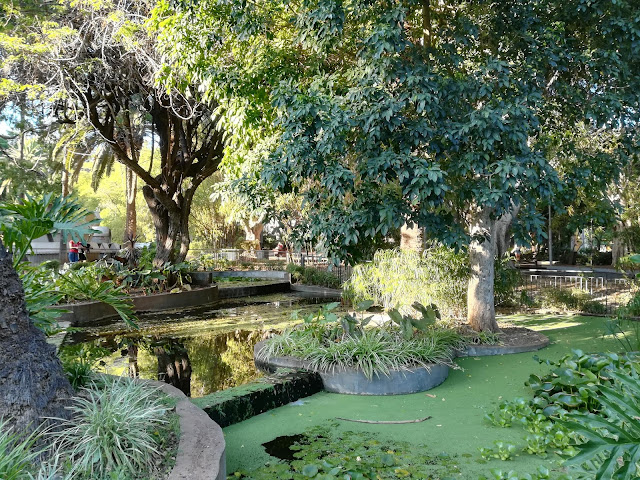 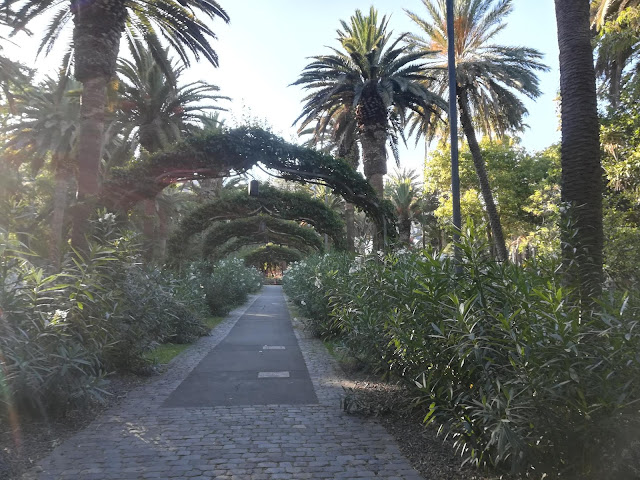 How does one tell the difference between a four and five star hotel ? Simple - the five star one has an outdoor turtle enclosure. 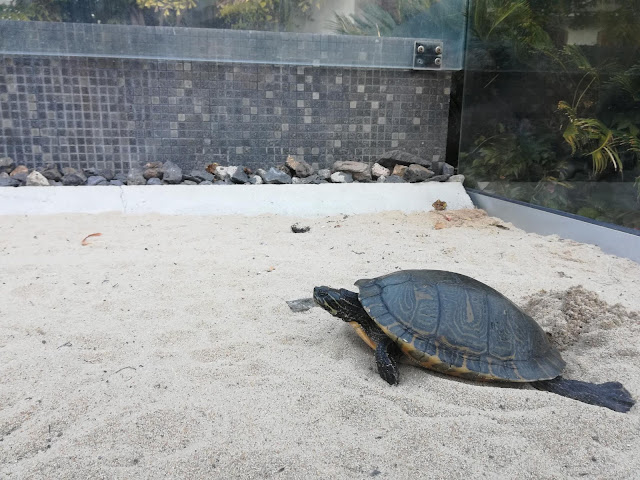 Dinners are nice, but uninteresting. More dramatic was the excursion to Teide Observatory. We saw a solar telescope, a pyramidal sundial, a 1.5m optical telescope and a few other instruments scattered around the site like mushrooms. But mainly we saw spectacular views of the volcano, towering above the sea of clouds a thousand metres below.

All this was finished off with tea and biscuits at 2400m altitude.


The final day consisted of an optional trip to the observatory on La Palma, which I'm very glad I did. Although the Teide volcano is much higher at 3700m, the summit of La Palma overlooks a huge volcanic caldera. It takes a while to get there though. First there's an 8am flight which takes slightly longer to taxi to the runway than it does to hop between islands (it actually flies at a slightly lower altitude than the summit of Teide).... 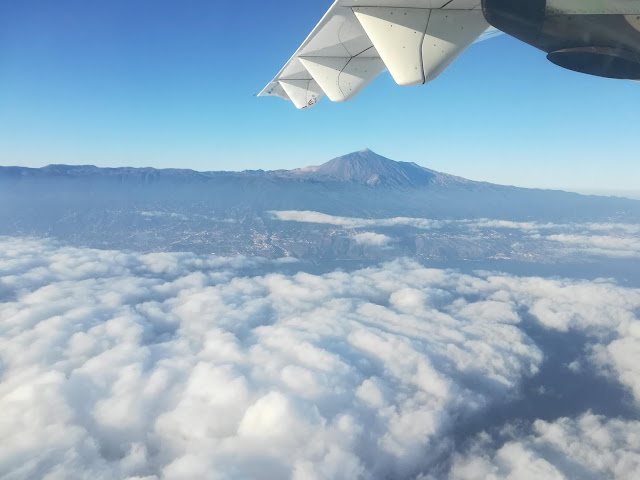 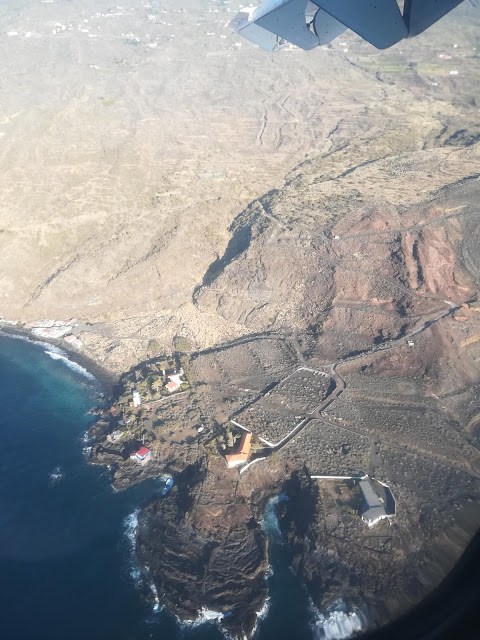 Then there's an hour's drive in a bus up a very windy road (and I lived in Puerto Rico so I know what I'm talking about when it comes to windy roads) but with some outstanding views. 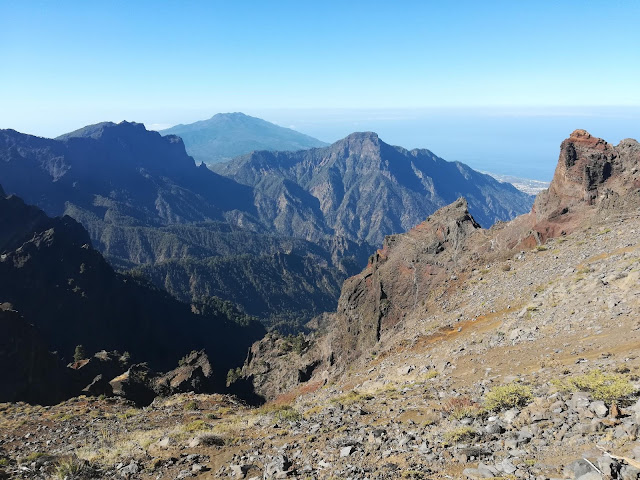 Finally we got to the observatory complex, which had laid out a much-needed breakfast. Tea and croissants and cake aplenty. The rest of the day was spent on a tour of the telescopes. Our guide was Sheila, an extremely mumsy sort who I had the distinct impression could easily be site director if she wanted. We started with the giant MAGIC telescopes. These are enormous, 17 and 23 m diameter optical telescopes designed to detect Cerenkov radiation from gamma-ray bursters and other exotic, high-energy sources. 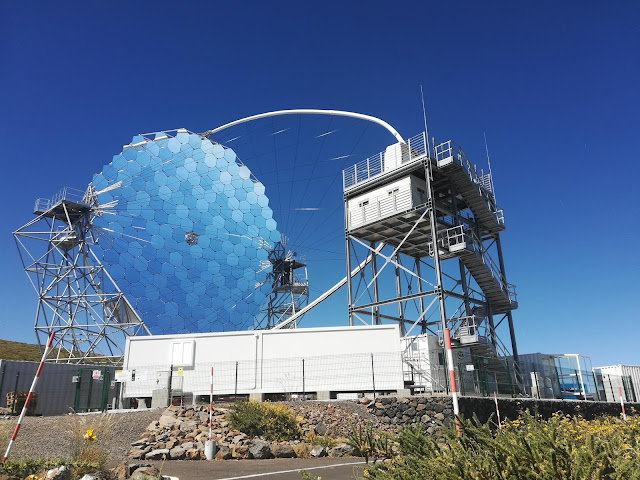 The thing about Cerenkov radiation is that it's produced by particles within our own atmosphere - they don't receive photons direct from the source as other telescopes do. So their resolution is absolute crap. The game here is sheer light-gathering sensitivity, which means the segmented mirrors don't have to be precisely aligned since they don't try to produce a focused image. Which is why they're so much bigger than other optical telescopes. Mind you, they're not so unfocused that they couldn't accidentally be turned into a genuine, no-fooling-around death ray, which is why they're pointed well away from the Sun.

Next we went to the world's actual largest optical telescope, the Gran Telescope Canarias. It's run at a mere $6 million per year - compared to the slightly smaller Keck facility which consumes $17 million, this is not so much impressive as it is worrying. That's the sort of level where it's astonishing they're able to keep the lights on, and sadly explains why this place doesn't get much publicity and hasn't made any major breakthroughs as yet. It's not that it doesn't have the technical capabilities to do so, it just doesn't have the funding. That doesn't stop it being a hugely impressive piece of engineering though. 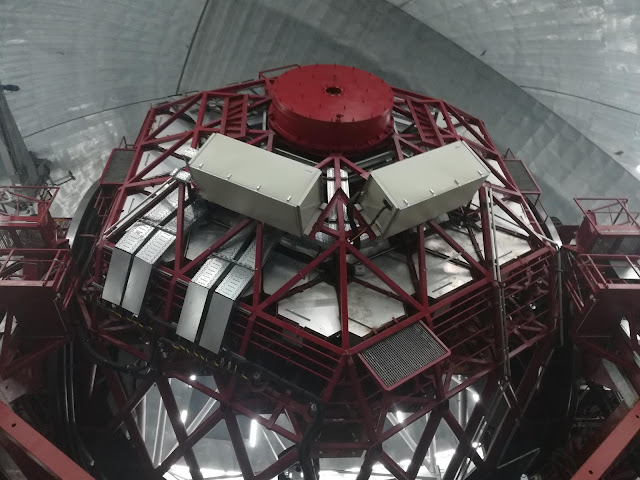 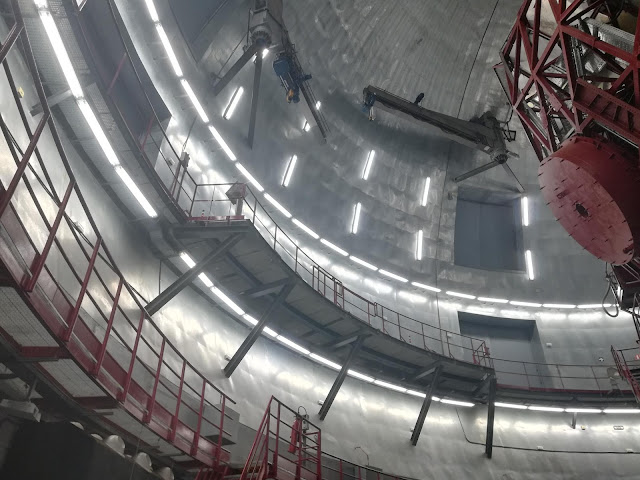 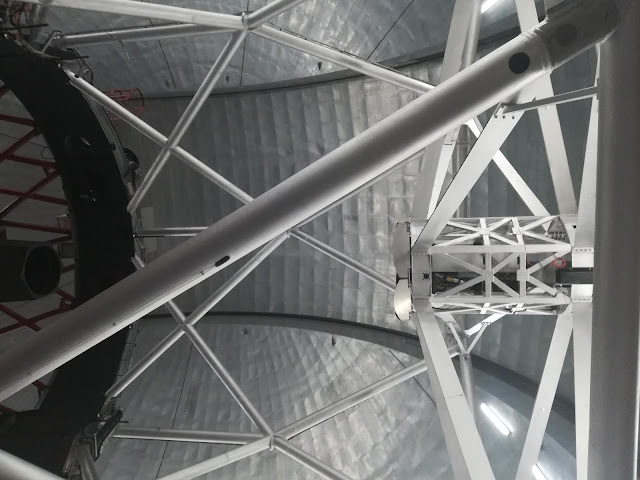 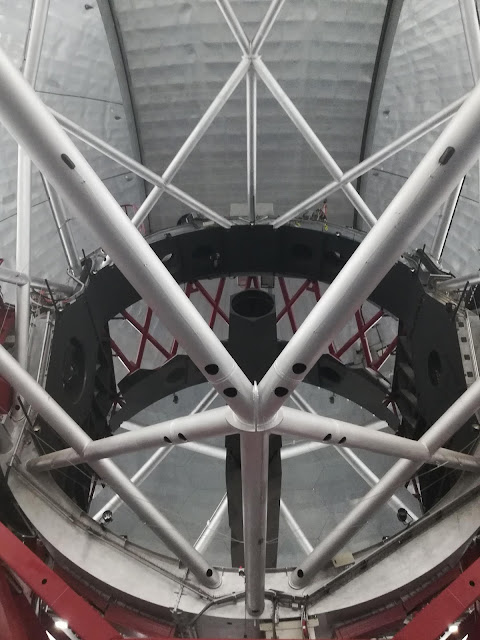 The dome of the GTC rotates with less noise than a conventional car. The telescope itself can be moved around by hand and is absolutely silent.

Our final telescope was the venerable William Hershel Telescope. Though a 4 m diameter is now small compared to 10 m giants like the GTC, it's a reliable old workhorse laden with all kinds of different instruments. And it still manages to impress through sheer gargantuan size - older telescopes tending to have much larger domes than they really needed. 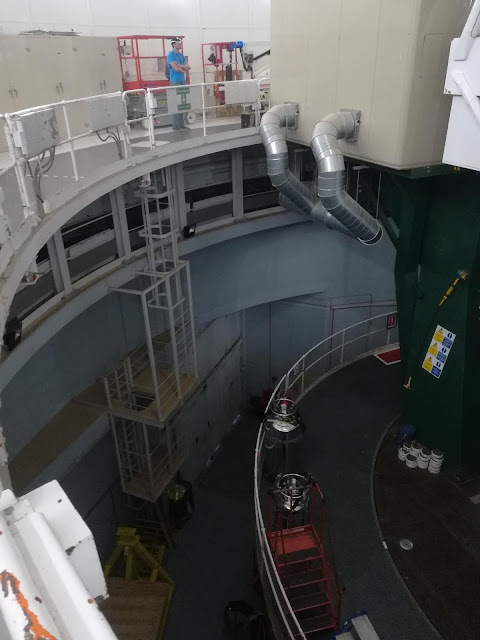 Saving the best till last, we finished with a walk around the summit. Although 2400 m is more than a thousand metres below the highest altitude I've reached, it was still tough going walking around. We had only a little time, but it was enough to see the highlights. Not that the photographs are really adequate, mind you. You get a much stronger sense of oh my goodness that's a long way down isn't it? up there. 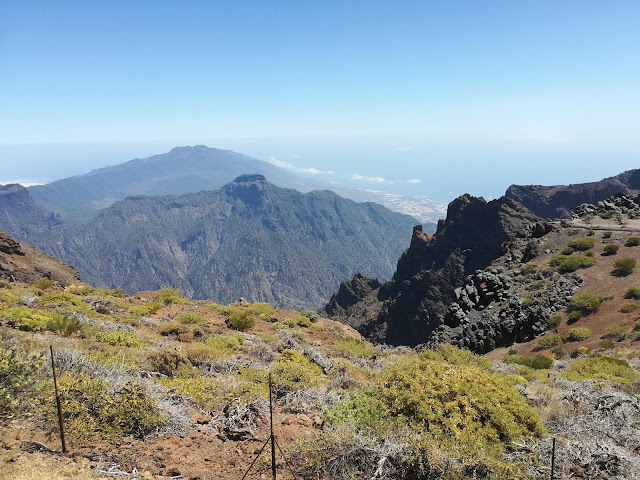 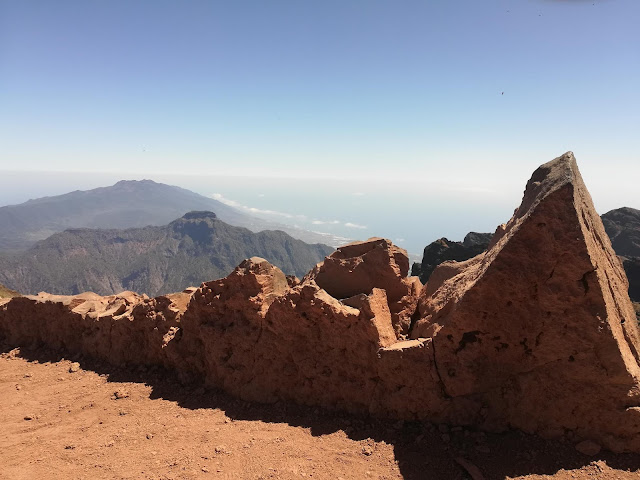 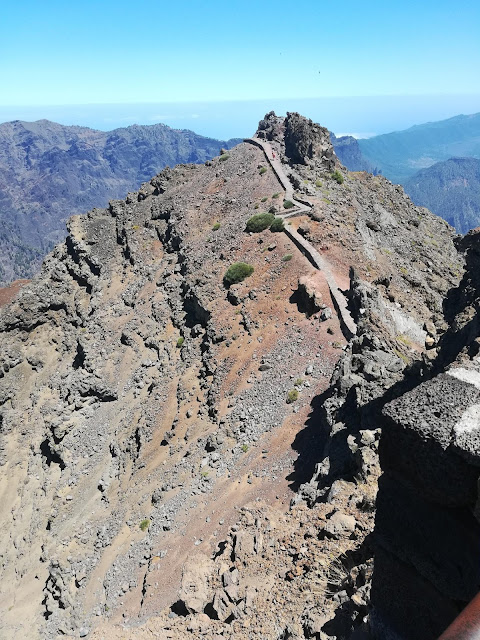 And then I went home, quite failing to have any plane or luggage problems at all, and collapsed in a big heap.
Posted by Rhysy at Thursday, July 18, 2019 1 comment: