Four All Things There Is A Season

A week is a "long time" in politics ? More like a bloody agony. It's been God-knows how long since I did a politics-as-movie-analogy post, but it's high time to resurrect this important form of super-serious socio-political commentary.

First, the mood right now is very much out of Star Wars : 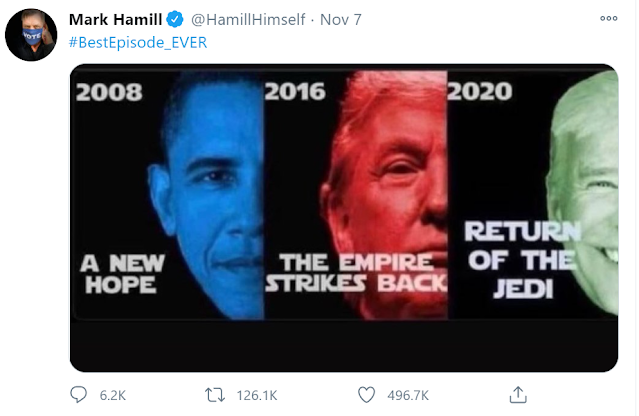 Specifically it's like the very end of Return of the Jedi after the destruction of the second Death Star and the whole galaxy bursts into cheers :

Trouble is that none of the other characters or storyline really fit. Joe Biden as Luke, a forgotten and under-rated candidate living in the political wilderness ? Meh -  sort-of... nah, not really. There isn't really a good equivalent of Vader either, unless Mike Pence suddenly decides to turn away from the dark side*. I suppose Bernie Sanders might be Yoda and AOC could be Leia, with Nancy Pelosi as "many Bothans died" woman (and Obama as Lando Calrissian ?), but the story just doesn't fit.

* Technically there's still time for this to happen.

To be honest, a few days ago I was thinking that Batman Begins would have been a better choice : not as an analogy exactly, but with the League of Shadows as the good guys.

Though if you want an analogy, I suppose you could cast Vladimir Putin as Ra's Al Ghul, and substitute "misinformation" for "economics". Trump works pretty well in the role of head mobster Flacone...

... but then we'd have to have Joe Biden as Batman, and that's just weird.

Any anyway, this is all missing the point : which is that I thought Liam Neeson might have been right. A society so corrupt as to vote for an insane fascist deserves to be burned to the ground, because it's the only way it'll learn. Just ask the nice people of Europe, where this actually fucking happened.

But now, a week later, and the League seem like the bad guys again. Order is restored ! Hooray !

No, the best analogy I've found is Gladiator. I watched in on Saturday, when things were looking good for Biden but it wasn't called yet. I wasn't ready to celebrate but I was ready to watch a movie about the fall of a horrible dictator. And it's way more topical than I thought.

The movie follows the story of a childish dictator with some serious daddy issues : 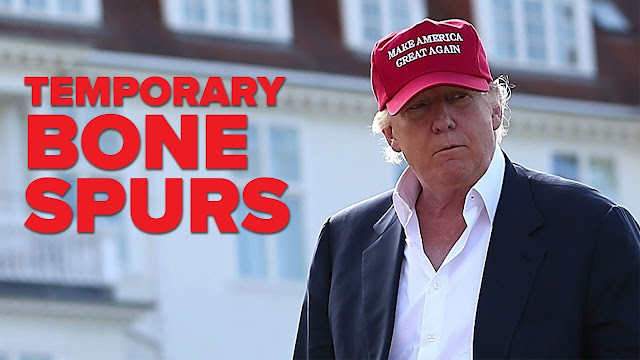 He even deliberately makes an enemy of a war hero.

It gets better : he has disturbing incestuous tendencies.

And from the word go it's obvious to everyone that he has no political skill whatsoever. He vows to "bleed the Senate" and rid Rome of the corrupt politicians :

On entering Rome itself he's greeted with cries of "usurper !" and "you'll never rule us Commodus !". Definitely a #NotMyEmperor moment. And he appeals firmly to idiotic populist tendencies, giving Rome an extended series of games as a distraction. "Fear and wonder... a powerful combination. He'll give them death - and they'll love him for it", says Derek Jacobi.

Eventually, after a battle that's closer than anyone expected, he gets stabbed with a big sword and democracy is restored. 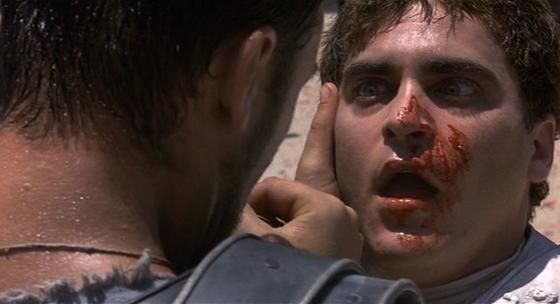 It's an extremely satisfying moment, and it's interesting to reinterpret classic movies in a changing world. And it really does feel like there's been a paradigm shift. Suddenly we don't have to deal with all that bullshit any more ! I turned on the news today and was greeted by stories about a successful vaccine and a helicopter crash in which nobody died ! Amazeballs.

Except... the Trump era didn't much end like Gladiator : it was altogether stranger. 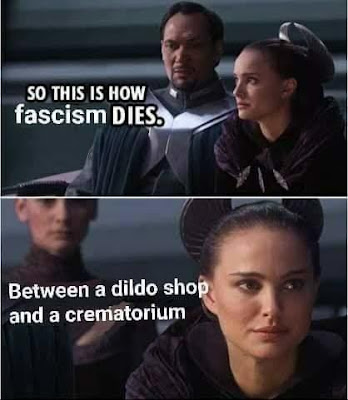 Yes, we genuinely had Trump's legal advisors protesting from a car park of the Four Seasons gardening centre. Four All Things There Is A Season... and one of those Things is to be bloody confused, and that Season is Right Now.

I just can't think of any good analogies to this one. In no standard narrative does the evil dictator's reign end in a gardening centre. The only vaguely-similar thing I can think of is that rubbish bit* at the end of The Lord of the Rings novel in which Saurman is reduced to pestering the Hobbits. Basically he goes around tearing up allotments out of spite, which is an ignominious end but an absolutely ridiculous way to end an epic story.

* You can argue all you want how important it is, but I'm firmly of the opinion that that section is just bad writing.

But... what do we do next ? Trump didn't get stabbed and Republicanism hasn't gone away - far from it. Is it a time to kill or a time to heal ? Life isn't a movie or mythology.

I have to say I'm extremely conflicted about this. My first instinct is that those calling for naked injustice are people you fight, not appease. But what's the goal here : straightforward punishment and retribution, or building a society where fascism cannot flourish ? The two countervailing arguments are that those endorsing racism, fascism and entrenched inequality deserve to suffer the consequences of their actions or nothing will ever change, that opening the hand of friendship will simply embolden them; yet simultaneously, treating people like dirt is exactly the best way to make them fight back all the harder.

I'm really struggling here. On the one hand, basic justice demands that you stand up to bullies. On the other, you only make peace with your enemies, not your friends. And you simply cannot afford to have seventy million enemies - even if it feels good to have enemies.

Please do watch this video before proceeding.

There is of course no symmetry between someone calling for the fascist suppression of minorities and someone calling for the suppression of fascists. These things are not the same. And certainly for the instigators and ringleaders I don't think there's any hope : being nice to Trump or Barr is as effective and morally stupid as appeasing any dictator. Even punishment won't help, because psychopaths simply don't work like that. Better by far to remove them from society completely. Imprison them, ignore them, whatever. I don't care. Just don't give them a platform to stand on. Shut them down utterly and completely.

But what of the followers, the armchair bigots who at most showed up to vote or maybe attend a rally ? This depends heavily on how deluded they actually are : if they were from a cult, no-one would have any hesitation in sending them for deprogramming. No-one would debate that they needed someone to reach out to them. But is this really an appropriate analogy ? A mass cultural brainwashing (which is entirely possible) is certainly an appealing explanation, but a more disturbing possibility altogether is that these people have looked at the evidence and thought, consciously or not, "nope, I'll stick with hurting the minorities, thanks." We have yet to solve this dilemma.

One of the hardest aspects of the problem is that polarisation is so easily self-driving. Five years ago I wrote this little piece about the problem of uncompromising men and their ideals. Trump is, after all, a lot like Palpatine (and thoroughly deserving of similar treatment) : he thrives on hatred and creating a bias spiral, where the hatred he instills in his opponents is used to convince his followers that anyone against him is evil. That's the difficulty : hating those who support evil is by definition justified, but expressing that contempt is the very worst way to win them over.

And yet... if you can turn a society from marauding Vikings to marauding Ikea salesmen, then perhaps Trump supporters too, in principle, can be saved. Even if they are a bunch of contemptible fuckwits.

(This post is not intended to actually persuade them, obviously. I'm in no mood to do that right now. This is only speculation of long-term strategy, nothing more. Obviously, it would be madness to expect immediate forgiveness from anyone - and I'm certainly hypocritical in that I block Trump activists on social media on sight.)

What might be going on with them ? All forms of extremism come with something positive : the problem is that they demand an incredibly high price in return. The last time the fascists were in power they offered a genuine concern for worker's rights. Nationalism, and other cults, do have some sort of (at least superficially) positive benefits for their supporters, but at the expense of everyone else. Trump supporters, presumably, at least think Trump is acting to their benefit, even if his real goal is nothing more than sheer megalomaniac powermongering.

So if Trumpists follow the pattern, it follows that they too are in some way suffering, and those concerns should be addressed. Maybe it's poverty, maybe it's privilege - both are problematic, but need to be addressed in quite different ways. The overly-privileged need a slap in the face, the poor need more traditional forms of help. Whether economic or informatic, whatever sickness has infected these people, whatever's driving them to ally with such a figure of pure hate, needs to be expunged. If not, all that work in overthrowing a tyrant will have been for nothing. True they've done, or at least endorsed, despicable things, but if you go on hating them forever - if you refuse to figure out the structural problems that have led them down this path, all you'll have is more hate. With seventy million of the buggers, you can't fight them all. You have to reintegrate most of them.

You don't have to tolerate the intolerant. But you do have to distinguish the people from ideas, to recognise that most people are at least as much products of the system as they are the result of their own choices : there but for the grace of God... Given the right circumstances, ordinary people can turn villainous remarkably quickly, but so too can hatred be overcome.

Ultimately, forgiving your friends is easy and generally unnecessary. Forgiving your enemies, acknowledging the harm done and accepting it, is far more challenging. So what's more important : to keep hating them, or stop them from being hateful ?

Two positive notes to end on. First, some regimes do fall peacefully and adherents and revolutionaries can peacefully co-exist afterwards. Forgiveness, sometimes, can be a powerful weapon. Second, Trumpism itself isn't an ideology, it's a movement for the glorification of one sad, pathetic little man, feeding parasitically off existing far-right ideologies. Without him driving it, as his loans are called in and he faces a barrage of lawsuits without Presidential protection, it's lost its driving force - Trump is not just a consequence but also a direct cause of the far right bullshit that characterises modern politics.

But alas, clearly not the only or even the main cause. And figuring out how to deal with that is far more challenging. I don't know what the answer will be, whether to punish or assist, but I strongly suspect it's some combination of both. Don't forgive Palpatine - but don't assume every minor technician who worked on the Death Star is equally guilty either.