One of those rare, "yes, an actual blog post !" posts that's not about science or philosophy and will have an absolute bare minimum of politics.

I love Christmas. Christmas is a time to be jolly, and holly, and... other things ending in olly. Christmas is a reassuring rock of tradition in a sea of confusion. A few months ago, it looked like it might just be possible to have my traditional family Christmas, but it soon became clear that that wasn't going to happen. Our decision not to travel was, needless to say, undoubtedly the right one.

To be honest an entire year alone in the jungles of Puerto Rico would have driven me to despair. A year in Prague ? Not so much. In fact, by staying safely within our cosy little bubble, we managed to have an effin' lovely Christmas.

Actually, we put the decorations up in late November. Again. Last year we did this on the grounds that we'd only just bought them and we'd only be here for part of December. This year we did it because we wanted 2020 to be over all the sooner. The doggies seemed to appreciate it; we covered the tree in tinsel until we could barely see it (still not enough, so we ordered more but it never arrived !) and tree chocolates, and Shirley even found crackers. Perfect. 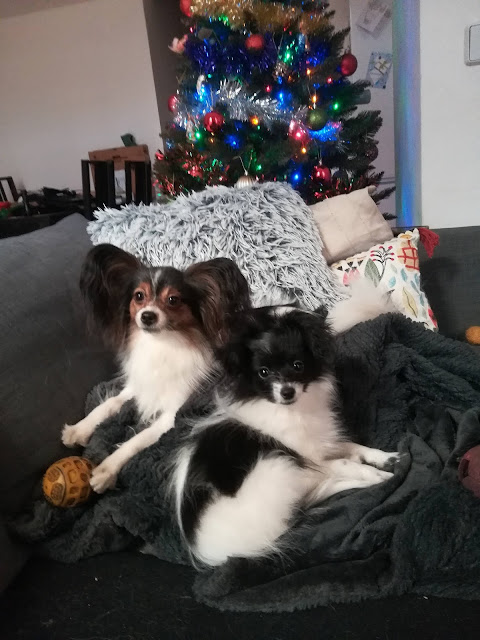 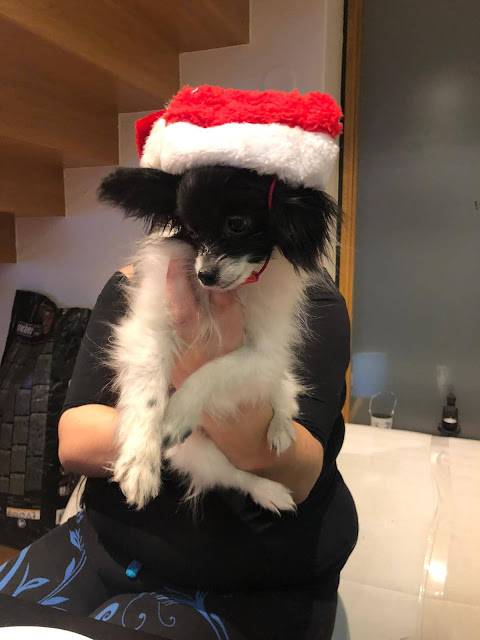 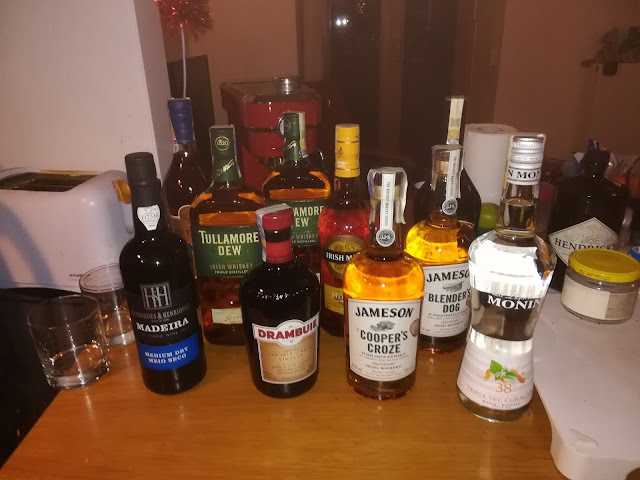 The Czech Republic has this bizarre scheme to give a small part of the salary back as meal vouchers. Why, I've not a clue. But they expire at the end of each calendar year and by the start of December I realised I'd accumulated 57 of them, worth 5,130 CZK : about £180, and food money goes a long way here. One of the consequences of this was that we got a 4 kg goose (that's more than the combined weight of both the dogs and considerably tastier) for the grand sum of 85 CZK (£3). Yes, £1 buys more than 1lb of goose. Ridiculous.

And so, in the end, we had a fabulously traditional Christmas that just wasn't where we were expecting it to be. Our neighbour came over for Christmas dinner the night before, and then we opened presents in the morning and watched the Muppet's Christmas Carol twice. Twice ! I mean, come on. If you can't appreciate the Muppet's Christmas Carol then you have no soul and are a pretty poor excuse for a human being, in my book. And we did a Lord of the Rings marathon, which I was sort of hoping to avoid this year because I watch it ever year and don't want to spoil it, but seen as how the year had been infinitely worse than usual this decision never stood much of a chance. And even after seeing it a billion times, it still gives me goose bumps. No other movie does that. 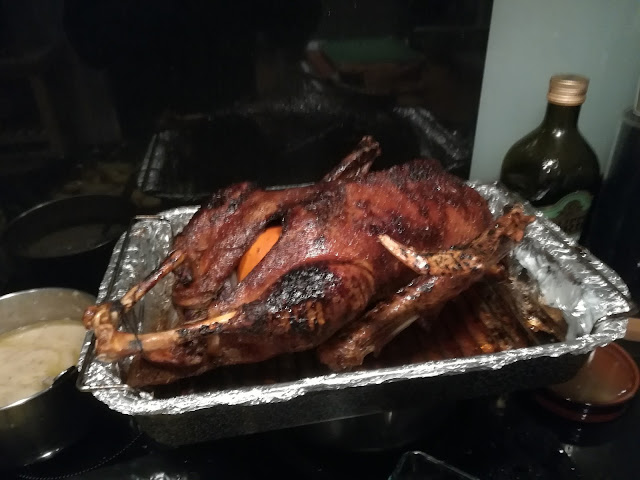 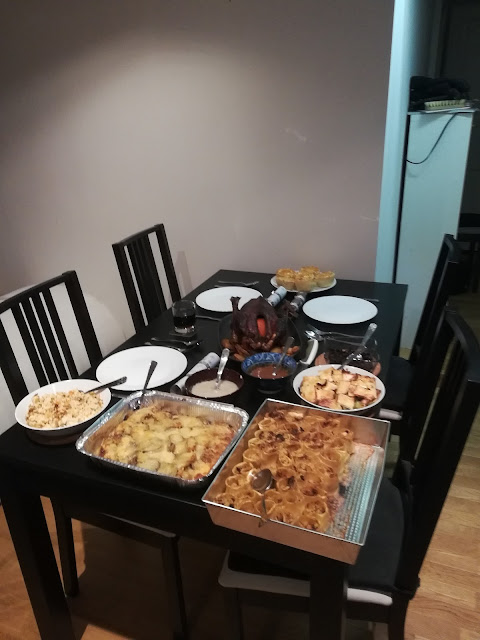 Of course the reality is that we're fabulously lucky. Other major crises have seen people march off to grim death in a muddy wasteland, but all society is asking of us is to stay at home. Fair enough if your job is at risk*, but if you're complaining because you can't go outside, you can sod off, thanks.

* Or indeed if you're suffering in any other way through no fault of your own. You can, and should, absolutely protest for better conditions. Just stop voting Tory though, mmkay ? You know, for the rich people only interested in lining their own pockets ? It would help, is all. Just sayin'.

So screw you, pandemic. You've forced me to stay inside in my lovely snug flat underneath a Christmas tree with two cuddly doggies and a mountain of chocolate and a goose you could clobber someone with. Things could be a hell of a lot worse, and for all that 2020 is a shitty year, it's by no means the worst in living memory. Not even close.

Then Shirley got a big promotion and this was the result.

Really should have held out on that LOTR marathon. Ah well, there's always next year. But Aliens looks bloody fantastic with 4k upscaling from blu-ray and an ambilight creating a pseudo-disco background. That's the lifestyle of a big-shot HR project manager, I guess.

So all is well in the land of Rhysy. Of course, all is not well elsewhere. Both the Czech and British governments have done a singularly awful job of managing the pandemic and shows no signs of letting up anytime soon. Look, it shouldn't be this difficult. Other countries have managed to turn the tide, and indeed, the Czechs succeeded in keeping it at a manageable level for some months.

Then they got complacent and things exploded.

Surely by now we know enough to tackle this more sensibly. So far as I can tell this involves :

When it comes to people whining about civil liberties, I say fuck 'em. If you had to face closer monitoring for a few months in order to prevent 75,000 people (in the UK so far) from being wiped out by an asteroid, or shot by an invading army, of course you'd do it. You wouldn't hesitate. People would look at you like you'd gone mad if you suggested otherwise. It shouldn't be any different just because this is a slower burn.
Of course, I can't end on a negative note, so I'll finish by pointing out that my hypothetical path to a better future is, quite remarkably, well on course. America has indeed elected Biden and resistance has been all but negligible and completely pointless. We haven't really found a way of living with the virus, but the vaccine has been put in production much sooner than expected, so that works too. And we have, as I predicted months ago (even when everyone else was insisting otherwise) got a Brexit deal, even if a daft one - that's still better than none at all. It turns out that all the childish grandstanding really was just petty brinkmanship after all.
And one other thing has happened that came sooner than I dared hope was reasonably possible : Cummings has gone. Now, the Brexit deal may have given the Tories a bump in the polls, but I see no reason this won't collapse. Labour has climbed back well into the realm of electorally-competitive sanity (sorry Frankie Boyle : a boring leader is exactly what we need right now), and frankly, if the UK elects this farce beyond farce of a government again, given that it now faces a thoroughly sensible opposition, then it fully deserves to sink into the sea. But it won't. As David Attenborough says, what use is crying in a corner ? No ! Despair is the worse and most dangerous luxury of all. Go and do something, even if that only means raising awareness. Keep the faith : a better world is possible.
(Link if uplifting embedded video doesn't work)
Posted by Rhysy at Tuesday, January 05, 2021 3 comments: