A Sting In The Tail

Events overtook me while writing this. I've kept the text as it was originally written, with italics for necessary interjections.

One of the quite rightly forgotten disasters of 2016 - for there were far too many - was a funding threat to Arecibo. By that point the telescope had already been in a state of horrendous management for many years, and this felt like it could be the beginning of the end. Who knows, perhaps it would have been. But things didn't work out in the way anyone expected.

Mismanagement took many forms, but from the perspective of a lowly postdoc, it primarily manifested itself as overworking the staff and under-exploiting the telescope. It felt at times as though there was a deliberate attempt to show that the telescope was just not worth the investment, a sort of delenda est Arecibo, rather than giving it the extremely modest increase that would have kept it highly competitive in the modern world for decades to come. And not only were the uppermost, distant echelons a problem : there were plenty of larger-than-life characters on-site who were, frankly, downright strange. It wasn't always a happy working environment, but since I've already recounted my personal experience of this, I'll not go over that again.

That's not to say there wasn't plenty of fun to be had, or that some of the staff weren't among the nicest, most decent and most welcoming people you could ever hope to meet. Everyone on site, I think without exception, wanted the Observatory to be a success. The disagreements were over how best to do this, who should do this, what exactly would constitute "success", etc. All that bullshit didn't detract from a fundamental desire to make things work. If maintenance ever suffered, there was no indication that this was anything more than an inconvenience rather than a danger.

I was unfortunate enough to witness the first management change in the Observatory's ~50 year history. This was a somewhat surreal experience for a freshly-minted postdoc having no real clue what was going on or how things were supposed to work. It's weird to find everyone telling you how unusual the situation is when you've no clue what normal is even supposed to be. It was certainly educational, but not something I'd like to ever repeat.

Fortunately I didn't have to. I escaped left a few years before, unbelievably, a second management change swept through like the over-rated hurricanes that occasionally devastate the island. Practically everyone I knew there left shortly afterwards, and I'll leave you to draw your own conclusion about that.

And that's not to say I wouldn't have ever visited again. Quite the opposite. Indeed, I rather took it for granted that at some point I almost certainly would, either for a conference or for observations. It's an entirely accurate cliché that though I wouldn't want to live there, it's a lovely place to visit. The island has some wonderful beaches... 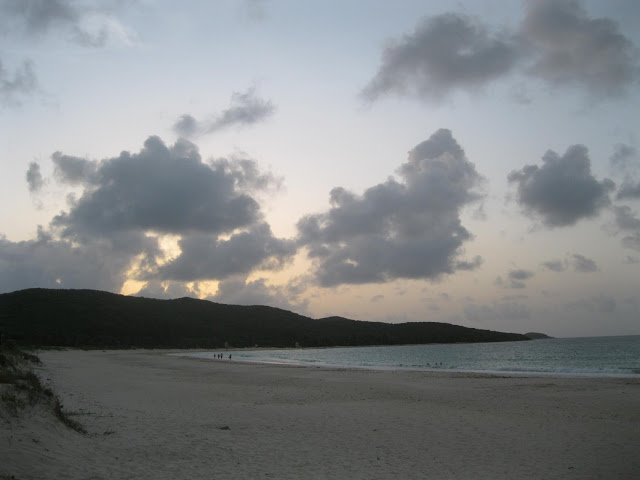 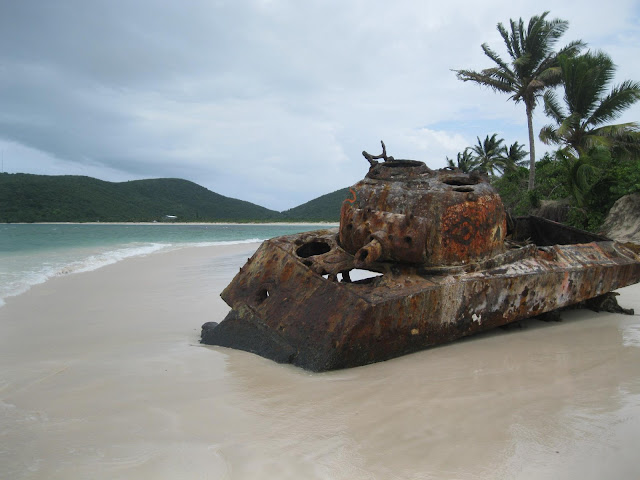 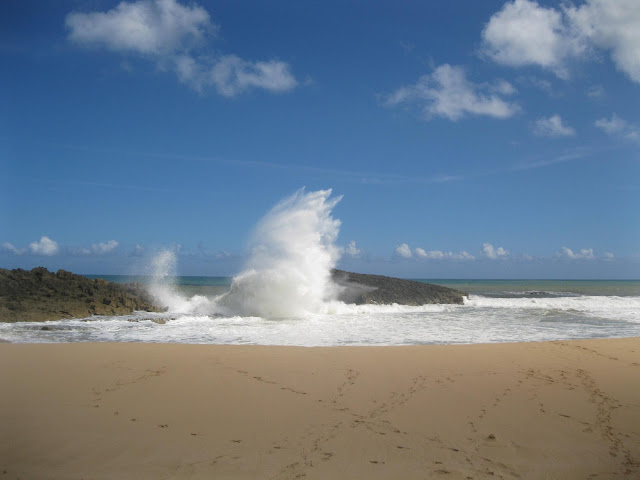 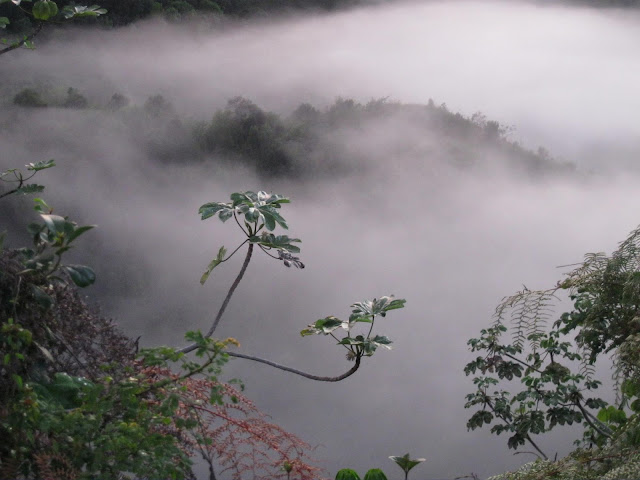 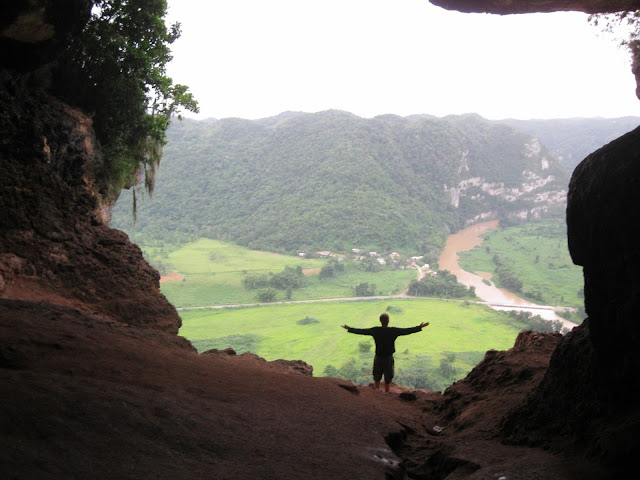 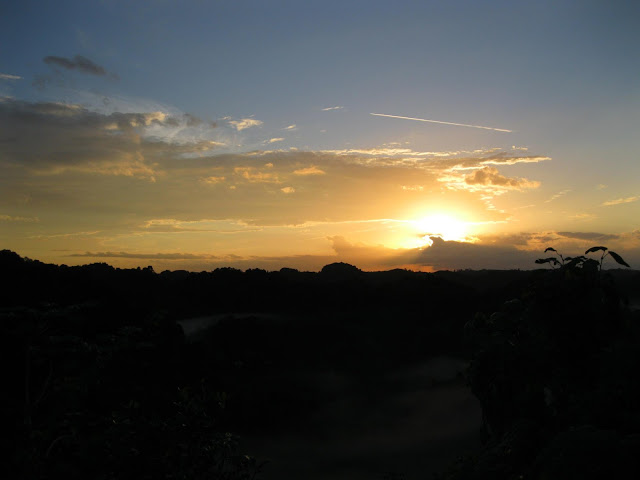 Puerto Rico as a whole is a strange sort of little world. Food is perhaps a good example : it's either absolutely delicious or pretty bad, with not much middle ground. The touristy parts are generally very nice indeed, the heat and humidity notwithstanding, but at the same time it's very much a place where people live. It isn't, for instance, much like the centre of Prague, which has been virtually evacuated of residents so that they don't bother the all-important tourists  (or vice-versa). It was an interesting mixture of the mundane blended with the bizarre, where you could drive out of a pharmacy only to witness someone towing a horse. It was a powerful lesson that exotic really is a relative state.

And of course the telescope is a spectacular sight. You never really quite get used to it. I used to make sure I walked around the site quite frequently, just to make sure I availed myself of the opportunity. 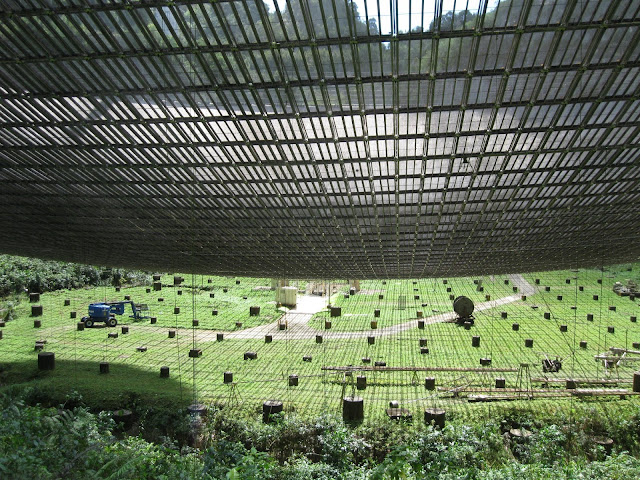 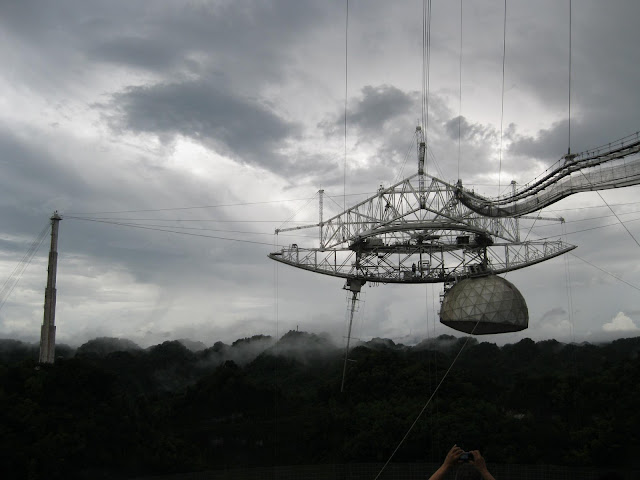 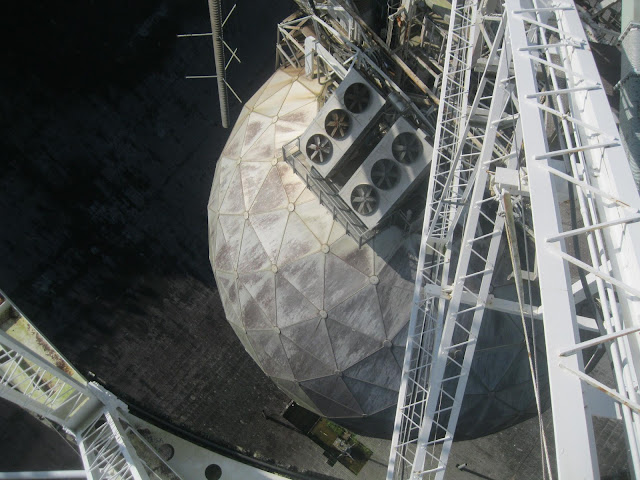 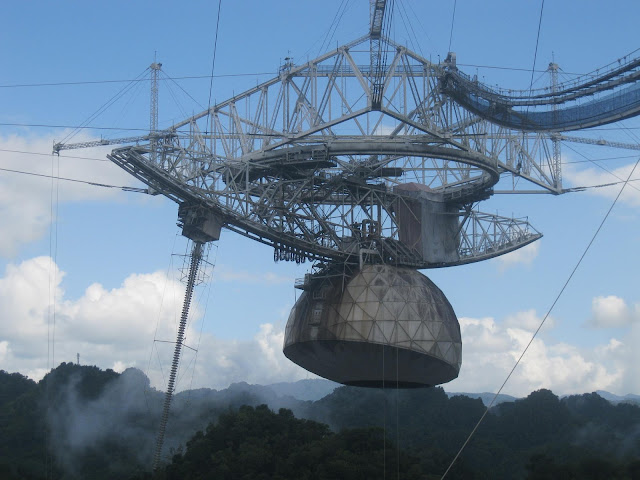 And I swam in the pool. I got blind drunk with the students. I went kayaking in the bioluminescent bay and watched boa constrictors try to catch bats swarming out of a cave. I tried to make the most of every opportunity that presented itself, not because of some foolhardy notion of carpe diem, or some hispster millennial idea of FOMO, but simply because for months at a time absolutely nothing happened.

Now those opportunities are ended. In August there was some serious damage inflicted to the dish by a snapped cable : 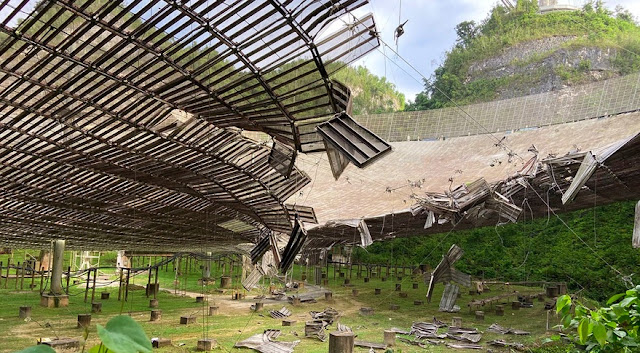 But this photo shows the damage in the worst possible light - other images showed that this catastrophic damage was relatively localised. And the dish, being made of lightweight aluminium panels and easily accessible, is relatively easy to repair*. What worried me more was the statement in the press that this failure actually moved the platform. This huge structure is what contains all the instruments, and at 900 tonnes any kind of accidental movement is something to be deeply concerned about. Still, the telescope wouldn't have lasted half a century and several hurricanes without some significant redundancy. So it looked like this would be a serious but survivable problem. Unless another hurricane happened to strike at the wrong moment, in a year it would be back to what passed for normal for a gigantic telescope lurking in the middle of the jungle.

*One idea floating around was to turn disused panels into coasters and sell them at the visitor centre, and I really wish this had happened so I still had a piece of the dish.

Such hopes were cruelly slashed by another cable failure. I could paint a narrative of shoddy management leading to collapse, but it wouldn't be accurate. However improbable it might be, all indications are that the telescope suffered two unexpected and unavoidable failures. Both cables seem to have had undetectable faults, with the second failing at just 60% of its design tolerance. And you just can't plan for those kinds of failures. With other cables showing signs of damage, it really is game over. Even deconstruction, the manner of which has yet to be determined, is going to be a dangerous business. Hell, even getting people to inspect the site is risky. At some point, one way or another, it's coming down.

It, has in fact, now collapsed. Any speculation about saving it by some last-minute miracle is over.

As I write this I'm in the process of backing up my 560 GB of data that I still have on my old account, which I use from time to time. Though I left in 2013, the most recent observing I did was in May of this year : we were about a week away from finishing a field when the hurricane hit. It's strange indeed that the collapsing structure potentially poses a risk to my data - the thought that the telescope will soon cease to exist is positively hard to grasp. Hearing the news was like taking a punch to the gut. It's the sort of thing you know could happen, but you never really expect to actually occur.

I completed my data download a few days ago, honestly expecting that it would be demolished before it collapsed. Thankfully the observatory computers can still be remotely accessed, so it looks as if no-one need be concerned that their data was lost due to the collapse.

Other people seem horrified by the prospect but personally I hope they use explosives, as long as it can be done safely. Don't make me watch some long, drawn-out disassembly. Don't make me watch it being torn apart piece by piece. Such an awesome facility deserves a far better finale. Give it a good send-off and end it swiftly and in style. After all, if you're gonna fail, fail spectacularly. Failure is, perhaps, something like dancing : do it with great enthusiasm or great skill but not both. Let the end be magnificent, not pathetic; a bang, not a whimper.

I suppose my wish was granted, after a fashion. The accidental collapse doesn't appear to have injured anyone and it was mercifully quick. It still feels absolutely awful though, as it was always going to.

I should also say a few words about Arecibo's legacy, though doubtless you'll find better reports elsewhere. Arecibo's most prestigious discovery was the Hulse-Taylor binary pulsar, of which observations showed were perfectly consistent with the emission of gravitational waves (later leading to a Nobel prize). Arecibo had a bright future in gravitational wave research through pulsar timing arrays, and for a brief moment it was possible it might beat the laser interferometers to the first direct detection. And it measured the rotation of Mercury for the first time, discovered the first exoplanet, and detected tens of thousands of galaxies through their hydrogen gas emission. It found a weird ring of gas in our own cosmic backyard, enormous gaseous bridges, gave insight into some of the most important problems in cosmology, and helped defend us from nearby asteroids. It was a wholly remarkable device.

What made Arecibo truly unique was its combination of capabilities. It could hunt for pulsars at low frequencies or search for spectral lines in distant galaxies at high frequencies, or zap Saturn with its superlatively powerful radar or study our own atmosphere. No other facility comes close to doing all of this at once. It was astronomy's Swiss army knife and everything it did it did well.

This raises the question of a replacement*. There are other facilities that can pick up in most of these areas, but not all. For example, there's only one other planetary radar instrument in the world and it's very much smaller than Arecibo. And while plenty of new telescopes are being constructed to survey extragalactic hydrogen, none of them will have the sensitivity of Arecibo. For some things a whopping great single dish can massively out-perform an array of smaller telescopes (I describe this more in this recent podcast, and in this earlier blog post). While FAST is slowly coming online, it'll be years before this takes over from where Arecibo left off - and just how well this will work in practise, or what the data access policies will be, remains to be seen.

* There's a petition to save it here. I've not signed it though, and I'm not going to until people can convince me it can be done safely. Look, my own fucking data comes from that telescope, so I think I'm qualified to say : yeah, it's important, but come on, it's not worth anyone's life, for heaven's sake. Clearly I was right, the attempt to do this would have been foolish in the extreme.

Could it be replaced ? Sure. Should it ? I honestly don't know. Hard questions need to be asked about whether smaller, faster, cheaper, more specialised instruments might not be better overall, or if the unique abilities of a giant single dish are sufficient compensation. The use of Arecibo for the wider benefit of Puerto Rico needs to be taken into account; science does not exist outside of society. Most of all, the NSF should not be involved with any of this in any way whatsoever, having demonstrated repeatedly that they just don't get it.

As for me, I've got enough data to keep me going for many years. The last paper I published exploited the very first observations I took, so Arecibo's legacy is not done yet - not by a long shot. By the time we've squeezed all we can from Arecibo's vast depth of accumulated data, perhaps we can dare to hope something comparable will rise again. That'd be nice. But I doubt it.