The Rewards of Victory (I)

Having escaped the madness of the tropical Americas, I proceeded almost immediately upon an absurd whistle-stop tour of Europe. First, Milan. Pretty place. Pretty people. Nice church. That's about all there was time to see though, because we left the very next day for Zurich. 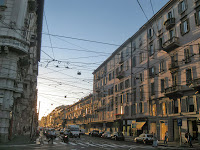 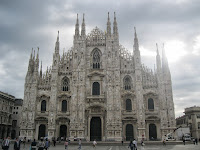 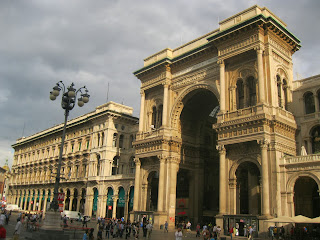 I didn't have anything to do with the planning of this trip - I was 4,000 miles away and not at all certain I could go at all at the time - but apparently the purpose of a holiday is to do as much as possible in a short a time as possible and not to sleep, ever. That's, err, not quite my definition of a holiday, but never mind.

The train trip to Zurich was relatively forgettable, except for one building suffering from a silly mistranslation, and  the clear abundance of cranes in Switzerland. Building a two-storey house ? A 50m crane should do the job. Hanging some curtains ? There are smaller, more portable cranes available for that. I don't think we saw a single village without at least one crane. 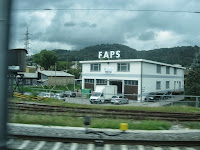 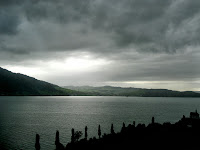 Zurich itself is a fairly forgettable place, certainly compared to the rest of Switzerland anyway. We stayed in an equally forgettable place, though to read the reviews you'd think it was swarming with writhing hordes of hookers. It isn't. It was a decent little budget hotel in a slightly seedy area. The historical part of Zurich is quite nice, though not magnificent. 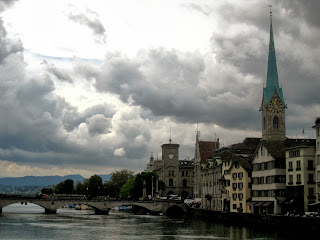 We didn't do a lot in Zurich apart from go on a very pleasant boat ride, and a Pink Floyd concert. These were separate events, as even Mr Floyd isn't crazy enough to have boat rides at his concerts. There was a small spitfire that crashed into the stage and exploded though, which is pretty impressive even to non Pink Floyd fans like me.

On the boat ride Rhydian accidentally started a meme. 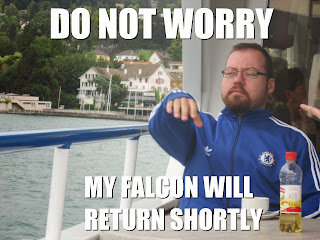 Thence to Interlaken. Another train ride and some really freakin' blue lakes. 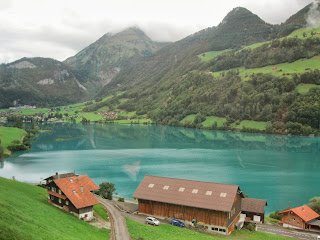 Interlaken makes Zurich look about as appealing as Splott. 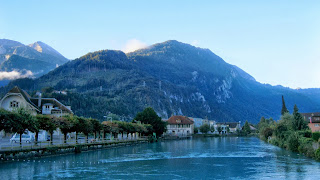 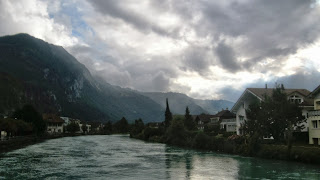 Having endured somewhere with one of the least public transport systems anywhere in the world, I now found myself somewhere which surely has the most. Whereas Wales occasionally umms and ahhs as to the virtues of sticking a train up to the top of a mountain, Switzerland has no such petty scruples. Blessed with an abundance of mountains, the Swiss realised long ago that everyone likes mountains, but not everyone has the will or capability to climb the things. Why should they ? They're bloody enormous.

And thus you can take a really quite astonishing train ride to Jungfraujoch (young-frow-yoch), a.k.a. the Top of Europe, a.k.a. High Hrothgar. The Swiss also realised that people might like to get out, look at the view, have a cup of tea and maybe do a spot of hiking. Which is exactly what we did. I mean, for crying out loud.

Then we got back on the train until we reached Jungfraujoch itself. This is what made me unable to refuse this trip : the stupendous Sphinx Observatory, overlooking Europe's longest glacier, the Aletsch. I was first made aware of the Sphinx - by complete coincidence - just a few months ago by this article. While it's a good article, it's somewhat deceptive and there are several points I think should be clarified. After the pretty pictures, though. 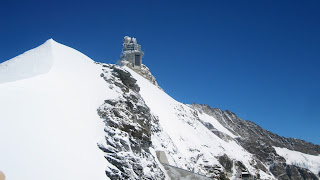 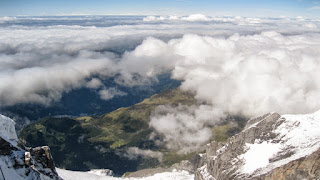 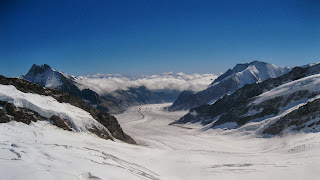 Firstly there's the claim that the Sphinx is the highest-altitude built structure in Europe. This claim is repeated in many other places, but I don't see how it can be true - Aiguille du Midi goes up about 400m higher.

Secondly the article makes it sound as though the Sphinx stands in glorious isolation. Well... it does, but it isn't the only thing there. Far from it. It isn't even the main reason people visit (which is the stunning view rather than the observatory). There are cafeteria, shops, multiple viewing areas, an ice palace and outdoor winter sports facilities. It's really very civilized. What's really impressive is that it's all arranged so as nothing ever, ever spoils the view. Well done, Switzerland, well done. 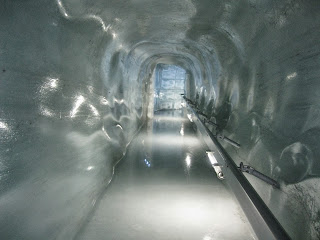 Finally, the remoteness of the site the article describes isn't really that awful. Yes, getting to the summit and back is a full day affair from Interlaken. What that neglects is that the journey there and back again is full of jaw-dropping scenery. So the hours spent on the trains are absolutely a part of the experience, rather than something you have to slog through for a reward at the end. 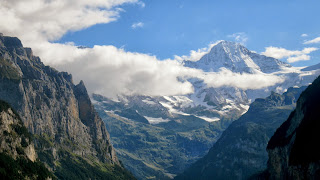 And indeed, it is very, very steep. 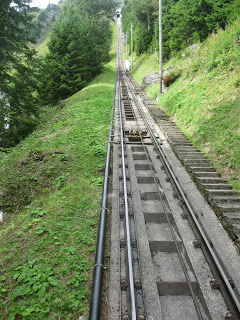 The view at the top is as awe-inspiring as you would expect.

That same afternoon we went to visit the Reichenbach Falls, made famous by Arthur Conan Doyle as the place where Sherlock Holmes and Professor Moriarty plummet to their mutual doom. It's basically a very scenic 250m drop waterfall. 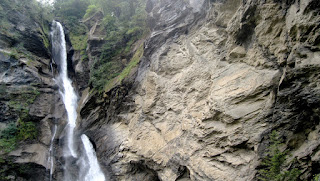 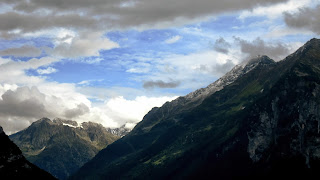 The funicular to the base of the waterfalls probably wasn't as steep as the Niesenbahn, but it's all relative. On the train ride back to Interlaken, we decided to work out what would happen if the cable snapped. The answer ? We'd reach the bottom at around 88mph, just fast enough to travel through time with a flux capacitor. Back to the Future IV could certainly be an interesting film. 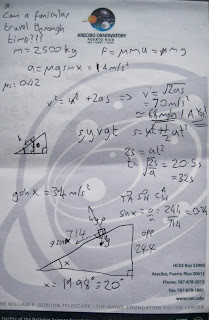 That's about it for Interlaken. Tune in next time (whenever that is) for more of Europe, in which the scenery remains so beautiful it should be illegal and the mountains get even pointier.
Posted by Rhysy at Saturday, September 28, 2013 No comments: